We will be running the Gigabyte Z390 AORUS XTREME with the hardware components we have on hand to understand how well the system performs. We will first look into the general performance of the system, then focusing on the CPU, Memory, Storage, iGPU and dedicated GPU performance. On top of that, with our baseline results created from the stock setup, we will overclock the system to see how much more performance we can achieve and sustain on the processor with the features on the Z390 AORUS XTREME motherboard. 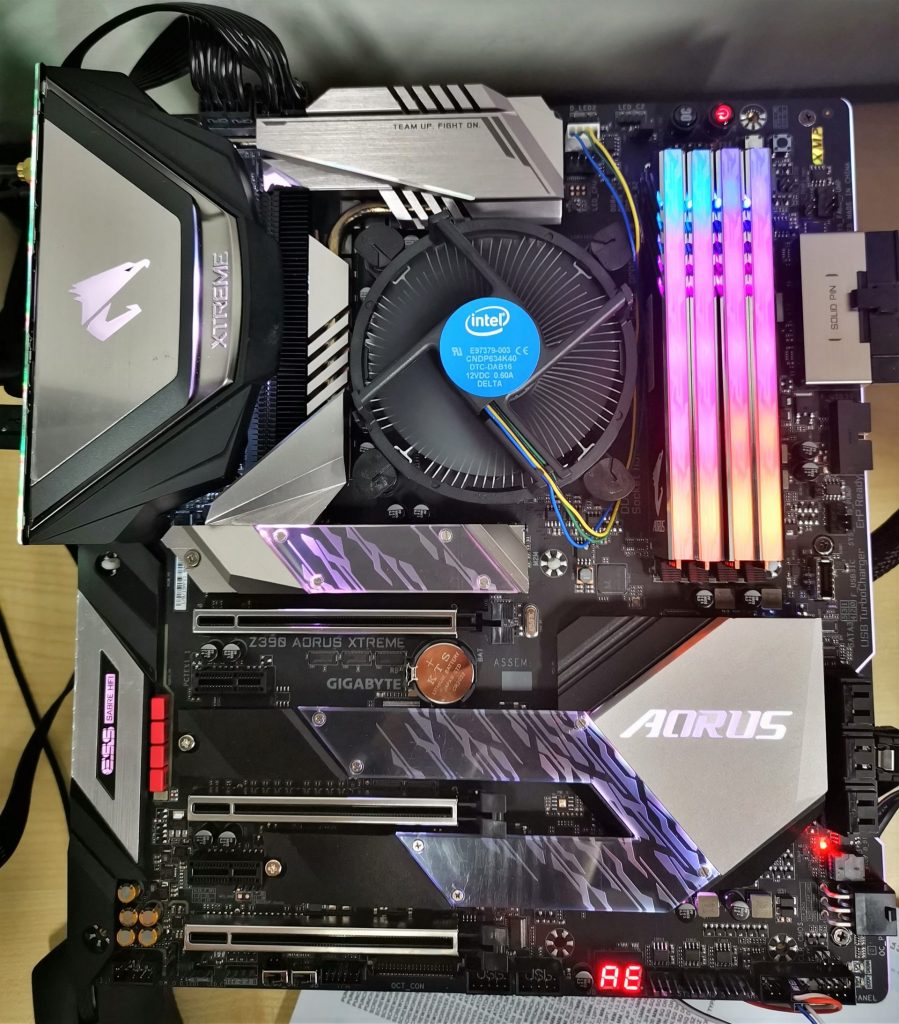 The test which was tested without any dedicated graphics card yield a score of 4697. Of course, we will expect the system to score a much higher score if a dedicated gaming graphics card was installed. This will be shown later on our synthetic graphics test. Regardless, the PCMark 10 run gives a good gauge of how the whole system performs right out of the box with an Intel processor. It’s still above average. 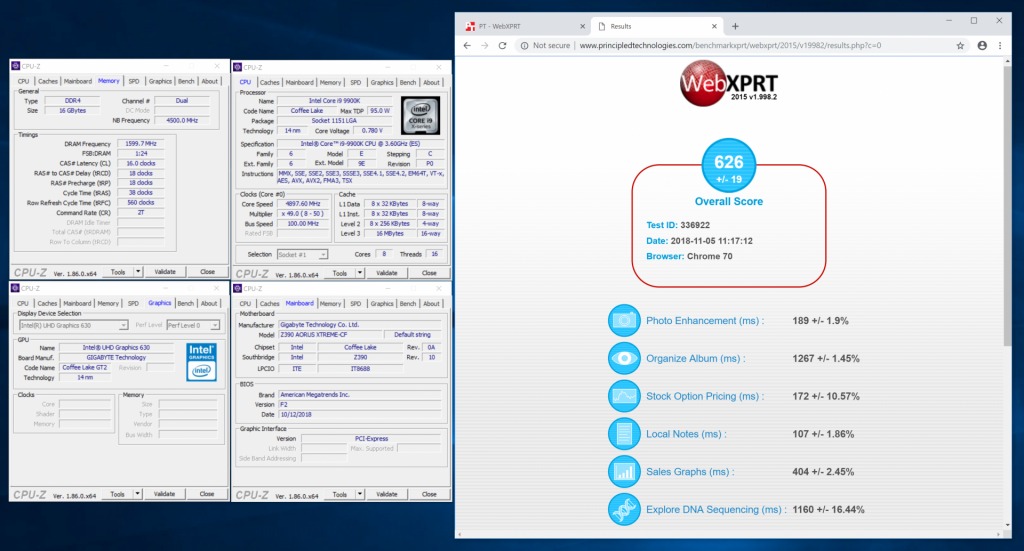 WebXPRT results shown that the system should be able to carry out online applications very smoothly without any problems at all. All tests were completed smoothly at stock CPU settings. 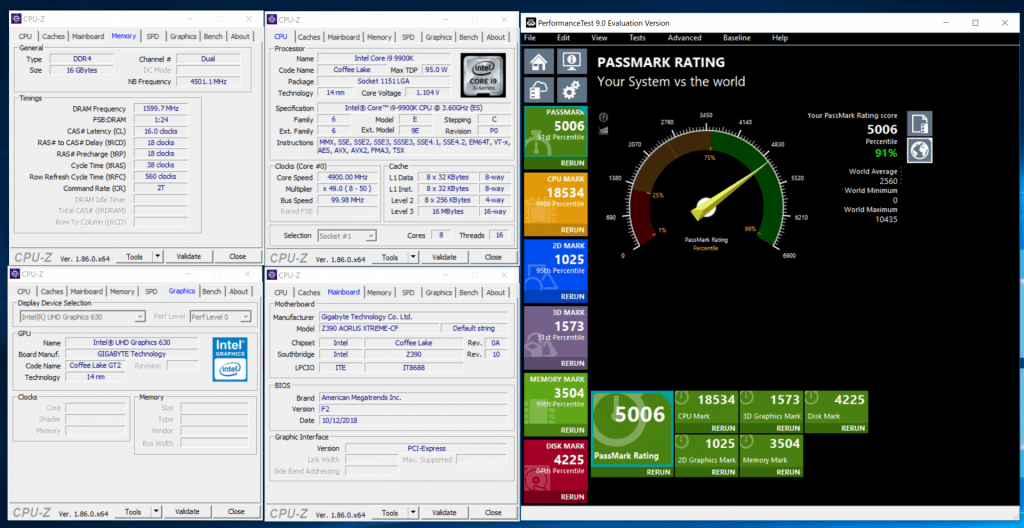 With PassMark, we can easily do the comparison with a database of components. As we can see, the CPU reaches straight into the 99th percentile. As expected, the integrated graphics solution loses out in the 3Dmark test. The motherboard was able to support the CPU, memory and disk well to allow them to reach top scores in the overall PassMark tests.

The Gigabyte R15 ran smoothly and completed with a score of 2044cb points. The motherboard was able to sustain the CPU at stock speeds without any throttling or mishaps.

Super PI is a single threaded benchmark that calculates pi to a specific number of digits. It uses the Gauss-Legendre algorithm to compute pi to 232 digits. Similarly for SuperPi test, the motherboard and CPU completed without any hiccups and achieved good score of 7min for the 32M test. 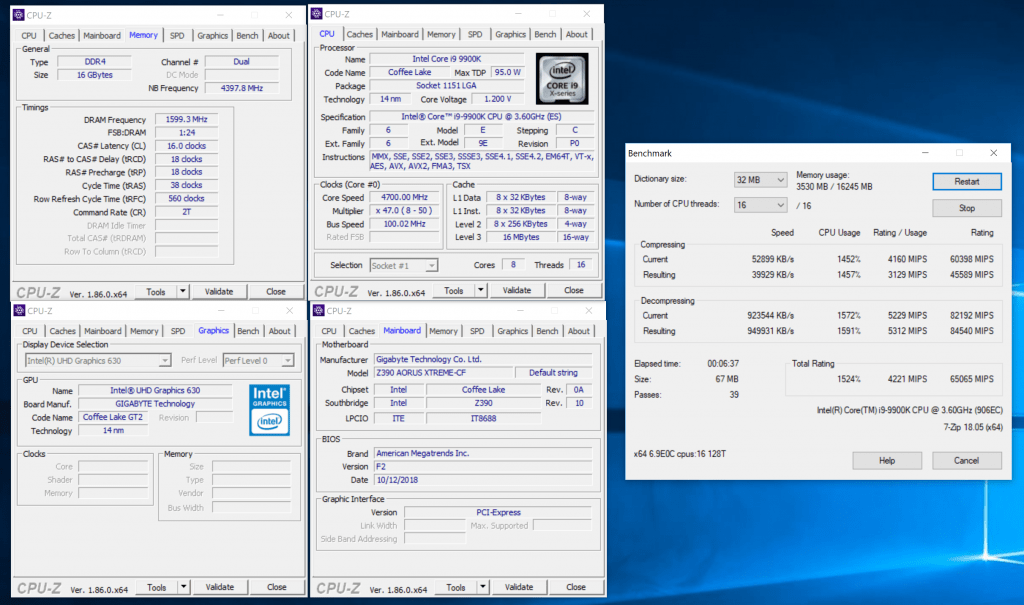 For more real-world test on compressing and decompressing of archives, the CPU and chipset was able to do operate at about 40MB/s and 959MB/s respectively. 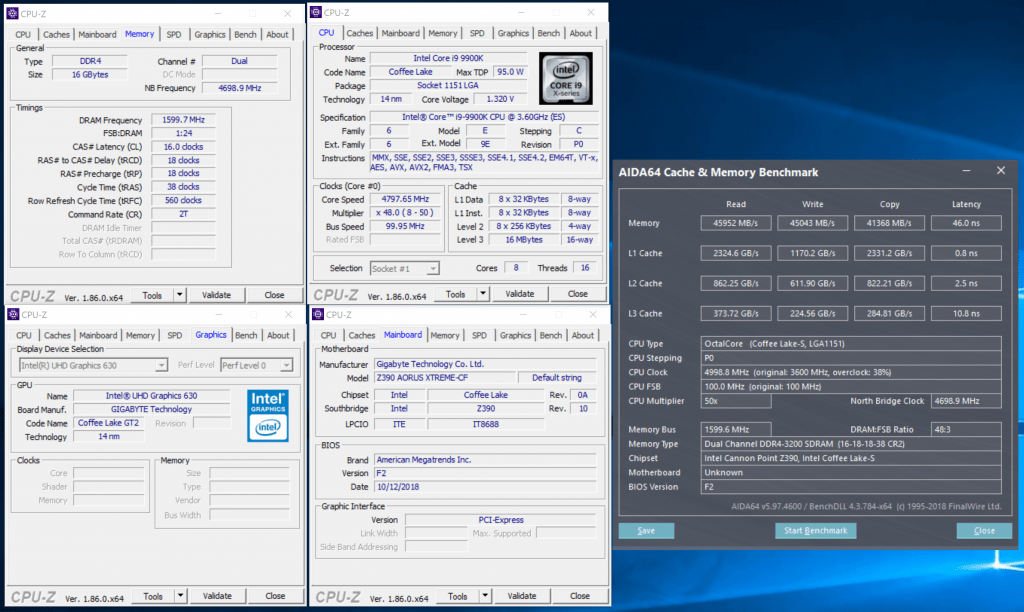 At stock speeds, the AIDA64 speeds for memory were decent. However, the latency was considered high, which was likely due to the loose timings on the XMP profile of the AORUS RAM kit.

CrystalDiskMark is designed to quickly test the performance of your hard drives. Currently, the program allows measuring sequential and random read/write speeds. 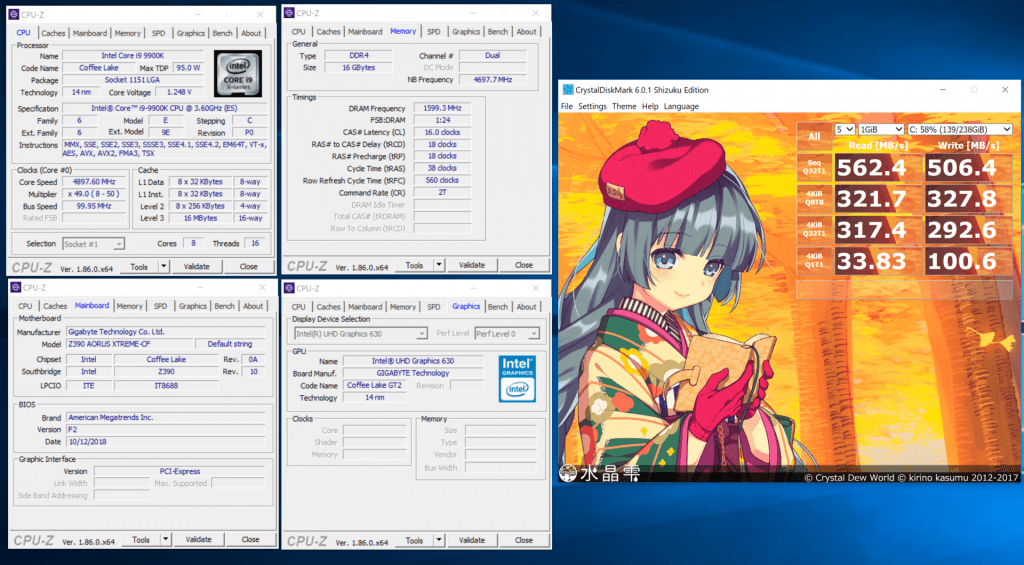 The motherboard was also able to be fully compatible with SSD devices as well. The Plextor M.2 SATA based SSD which was placed in the first M.2 slot operated at its maximum possible speed for the benchmark, and the results were expected. The results on the ATTO Disk benchmark is similar to those in CrystalDiskMark. 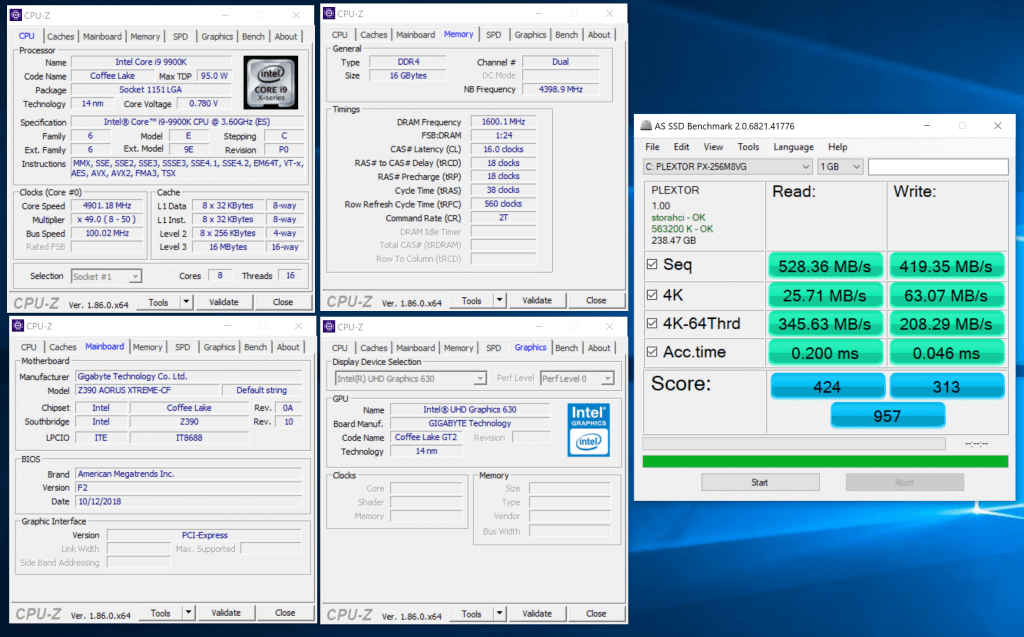 AS SSD does a more practical and thorough test on the SSD. The results were expected, but were lower than those from ATTO and CrystalDiskMark. This is due to a more practical approach which the benchmark uses, which shows a more real example of the result during actual usage. 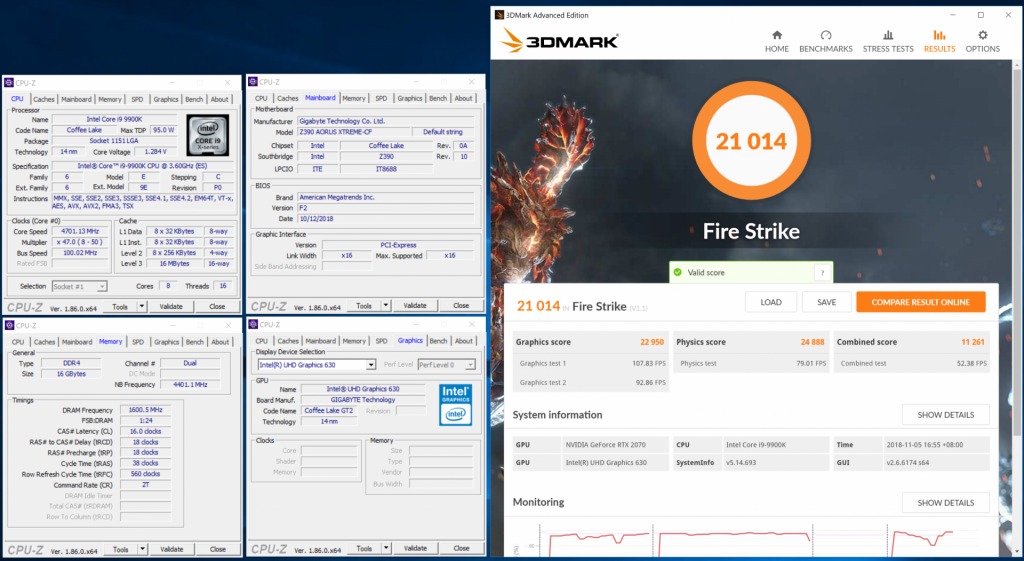 This time, we had the dedicated RTX 2070 graphics card added into the system. It was obvious that the score on these synthetic gaming benchmarks will be near the top, as we are using one of the best of the best CPU and GPU available in the market today. This also shows that the motherboard was able to support the integration of both CPU and GPU on games, working well together in such benchmarks.

3DMark Time Spy is a new DirectX 12 benchmark test for Windows 10 gaming PCs. Time Spay is one of the first DirectX 12 apps to be built “the right way” from the ground up to fully realize the performance gains that the new API offers. With DirectX 12 engine, which supports new API features like asynchronous compute, explicit multi-adapter, and multi-threading, Time Spy is the ideal test for benchmarking the latest graphics cards.

Similar to the FireStrike test, the TimeSpy test results were also great. The system came up in the 91% percentile.

The test is completed in 1920 x 1080 resolution in High Quality Preset. 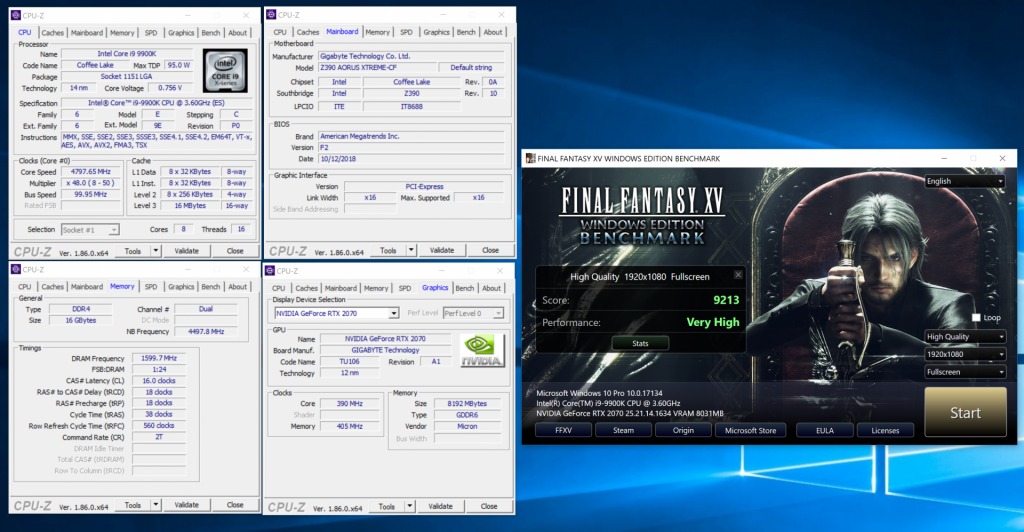 In our first game, the Final Fantasy XV was extremely playable, as it reaches a score of 9213 points and was determined to have a performance of “Very High”. Total War: Warhammer relies a lot on the CPU. Therefore, its FPS is largely affected by the performance of the CPU. Thanks to the new CPU from Intel, coupled with the new RTX 2070, the test result was beautiful. It had an average of 108.4FPS. Even at its lowest point, the frame rates were at about 75FPS, far higher than the 60FPS/60Hz refresh rate of the monitor. With all the settings maxed out,  the Deus Ex benchmark gave a result of 44.6FPS. However, the minimum frame rate of 3.4FPS is alarming. It could be due to the software or driver issue that caused that significant stutter for that moment, resulting in this result. Regardless, the benchmark completed without any major hiccups.

The test is completed in 1920 x 1080 resolution with all settings maxed out, but no Anti-Aliasing enabled Lastly, we tested the Intel HD Graphics 630 on a DirectX 9 game. It was able to run Street Fighter IV smoothly with an average frame rate of 90FPS. This means that the integrated graphics is still decent enough for games which only requires simple graphics.