When it comes to motherboard, consumers who just want to build a computer for work will not care too much about its aesthetic design. On the other hand, the aesthetics of a motherboard could be the number one factor for enthusiasts and case modders. The Gigabyte Z390 AORUS XTREME adopts a black PCB base and brushed metallic heatsinks to give the motherboard a feel of ferocity. This goes well with the AORUS eagle branding.

Of course, being a flagship model for the series, the Gigabyte Z390 AORUS XTREME comes with many RGB lighting areas. The RGB lighting on the motherboard can all be controlled and synchronised via the RGB Fusion software that can be downloaded online. Other RGB enabled peripherals or components from Gigabyte can also be controlled via the same software as well. There are a total of 6 areas of addressable RGB lighting just on this motherboard itself. Indeed, consumers who wants to create their custom light show from their desktop PC should rejoice, as they can finally target different areas with the intended colours. On top of that, there are 4 more RGB headers that can be used to control other connected RGB components, such as fans and LED strips.

Gigabyte also added some interesting design decisions to the motherboard to enhance its overall usability. Understanding that E-ATX motherboards are wider the usual ATX, PC cases which have cable routing holes with rubber grommets placed next to the SATA ports may be blocked. Therefore, the Z390 AORUS XTREME has got a unique cut at the SATA port area to make it easier for PC builders to route their SATA cables. 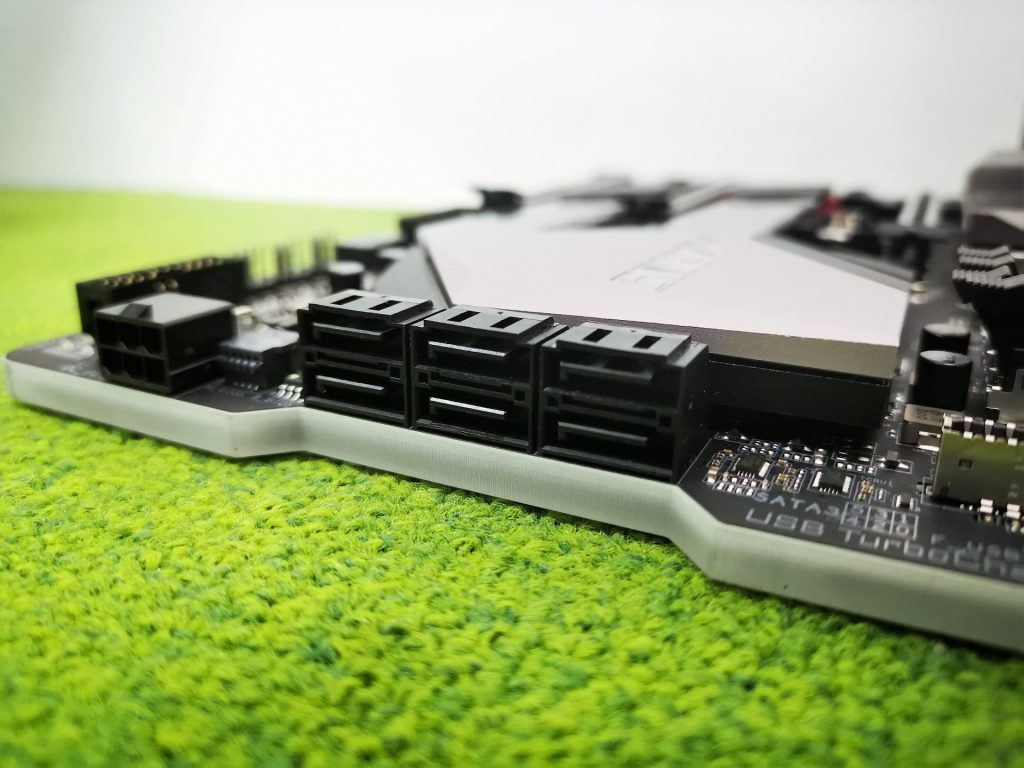 Gigabyte has went all out for the Z390 AORUS XTREME motherboard, preparing it for the most extreme usage environments. To fully unlock the capabilities of the new Intel Hexa-Core Core i9 processors when overclocked under sub-zero conditions, the Z390 AORUS XTREME is designed with an abundant 16 Phase Digital Power design that is capable of pushing even more power to the CPU when needed. 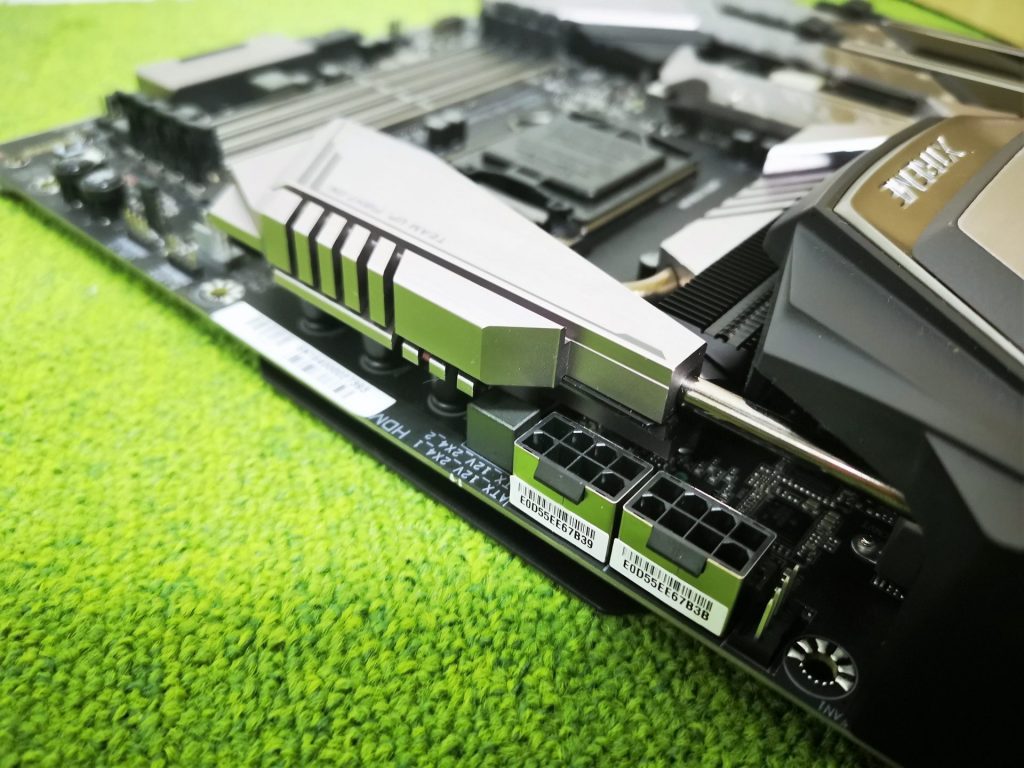 First up, the motherboard comes with an additional 8 pin CPU connector to make sure that the CPU can get its additional power when required. Do take note that only a single connector is required to be plugged in when the system is not used in an extreme situation.

The stability of current and voltage provided to the motherboard and CPU is of utmost importance when it comes to overclocking. Gigabyte has designed the Z390 AORUS XTREME with an all IR digital CPU power design, which includes a digital PWM controller with PowIRstage MOSFET. To put it simply, overclockers can achieve an unparalleled precision in delivery of power to the different components attached onto the motherboard, thus enabling them for their record breaking benchmarking efforts. 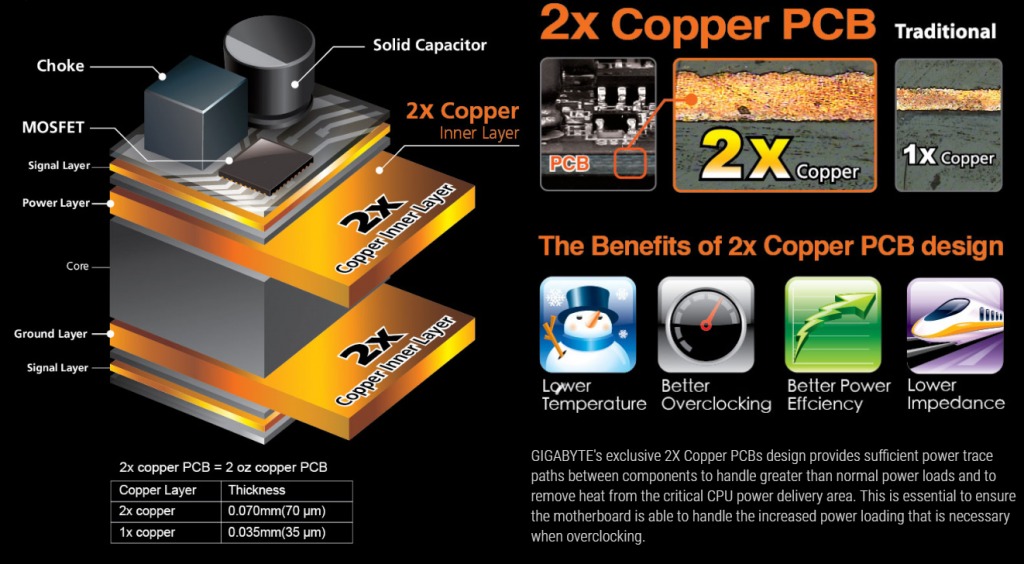 We realised that the Gigabyte Z390 AORUS XTREME’s base PCB is thicker than usual. This is because they have a 8 layer PCB design, and placed 2X Copper PCB layer to handle greater than normal power loads. The additional thickness in the copper layer also aids in removing heat from the components on the motherboard. Overall, this design helps to improve the overall reliability of the motherboard. 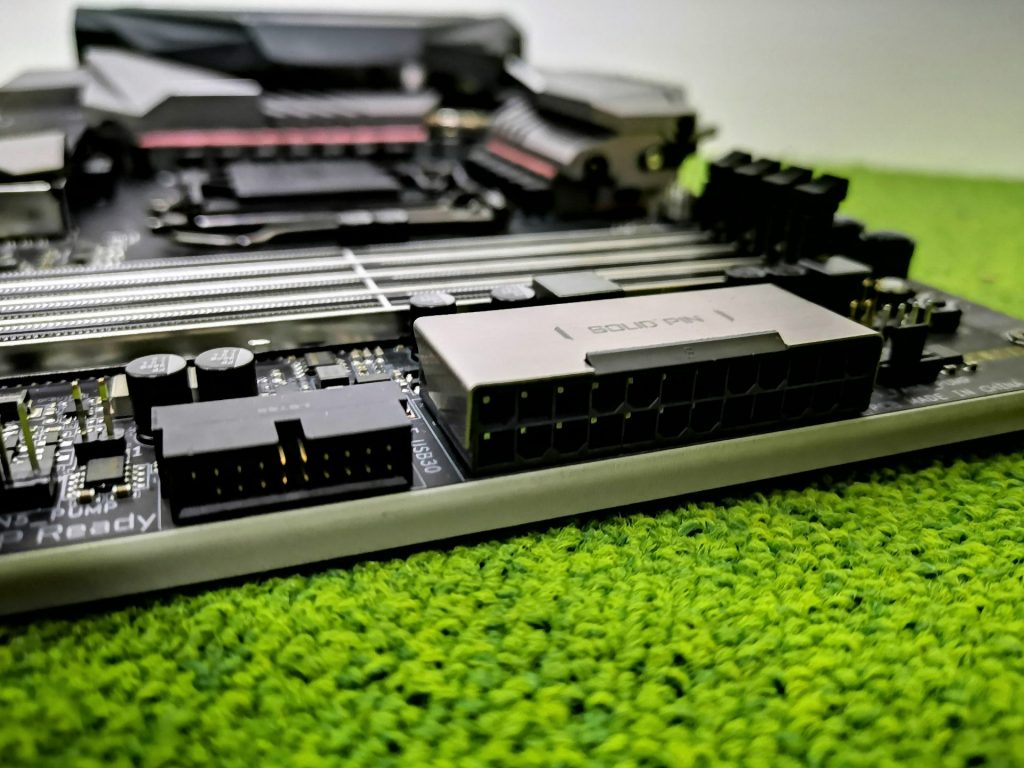 For example, all power pins on the motherboard are made with a Solid Pin design. Solid Pins have better strength, and therefore, will not bend or break as easily as traditional pins. Moreover, the solid pins brings about the advantages of a larger contact area for the conduct of electricity and sustain higher power and generated heat.

The DIMM and PCIe slots are also fortified with additional metal layers to increase its strength. Traditionally, only plastics were used and the pressure on heavy components frequently caused damages to the slots and their contact points, rendering the whole motherboard unusable. The strengthened slots improves the overall durability of the motherboard. It will be additionally useful for users who have an open bench setup (like ours), where the whole weight of the graphics card is only supported by the PCIe slot. 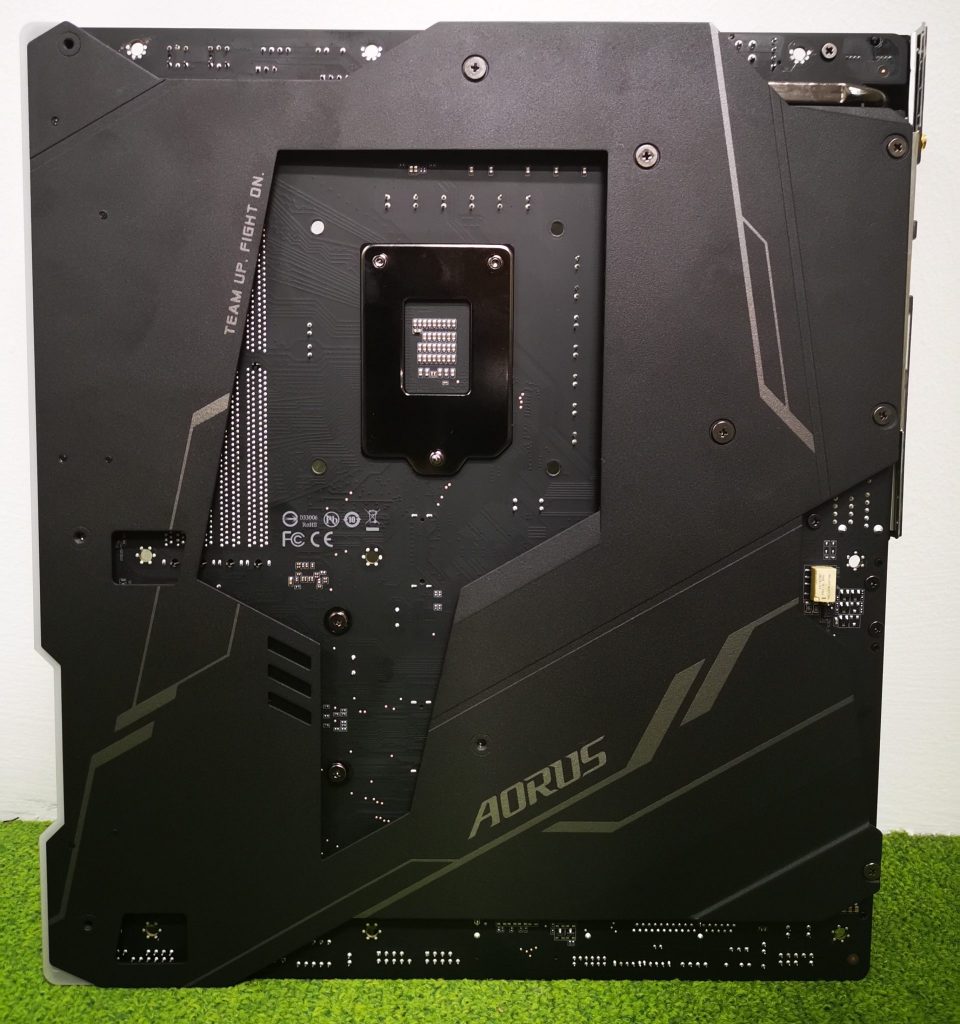 The back of the motherboard is also attached with an additional NanoCarbon base plate. This base plate is made from aluminum and coated with a thin layer of NanoCarbon to enhance its thermal radiation performance. Thermal pads that are in direct contact with the heatpipes and the base plate can aid the overall heat dissipation performance of the system. As such, Gigabyte claims that this design can effectively lower the backside PWM component temperatures by 10%.

An additional base plate on the motherboard also makes the whole motherboard structure more sturdy and therefore, reduces the amount of flex and stress on the base PCB which damages it. 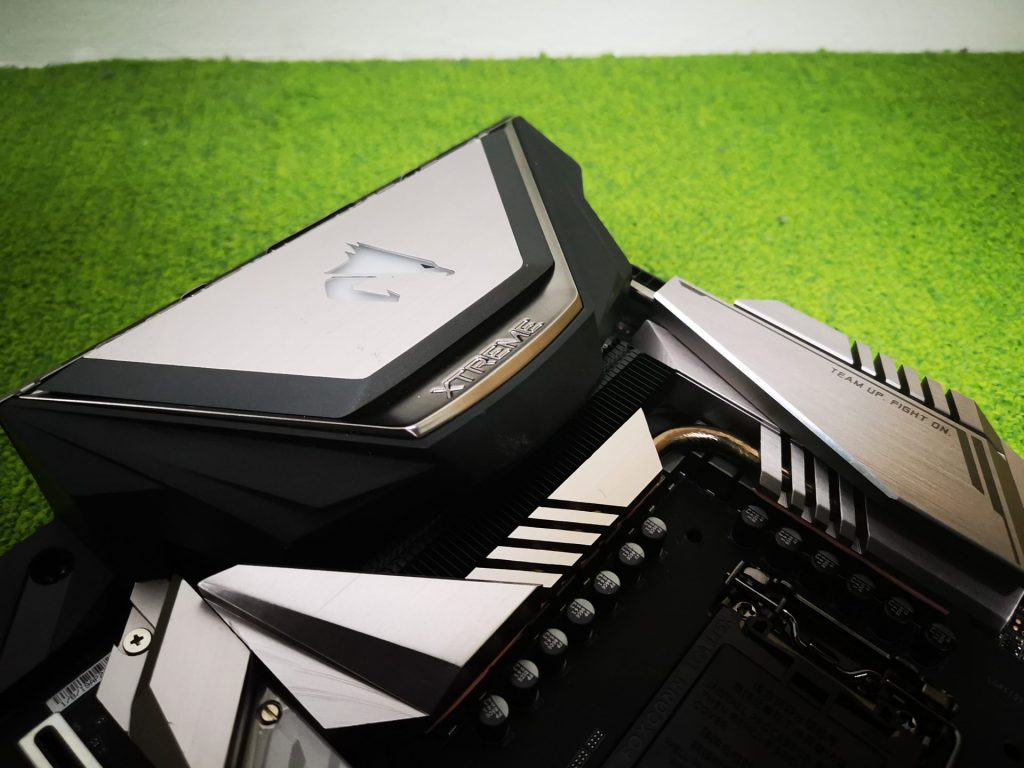 The main source of heat on the motherboard comes from the CPU and power components. Therefore, additional efforts have been placed onto designing the heatsink on the power components to make sure that it is able to effectively move heat away from the motherboard while still retaining a refined aesthetic design. The Gigabyte Z390 AORUS XTREME achieves this by have a fins-array on the heatsink to increase the surface area for effective heat dissipation. Heat is conducted from from the hot components through the high thermal conductivity interface pads directly yo the large heatsink. The heat is also spread-out through the direct touch heatpipes to the base plates and large top heat sinks. We took note that the whole thermal design cools down the motherboard passively. It could be a lot more effective if the motherboard is placed in a case with very good airflow, as the air will be able to bring the heat away from the concentrated heated areas away to the environment.

When it comes to fans for better airflow in the system, the Gigabyte Z390 AORUS XTREME can support an abundant of 16 fans in total. On the motherboard itself, it has a total of 8 fan connectors. Included in the package is a RGB FAN COMMANDER module which adds the support for another 8 hybrid fans. 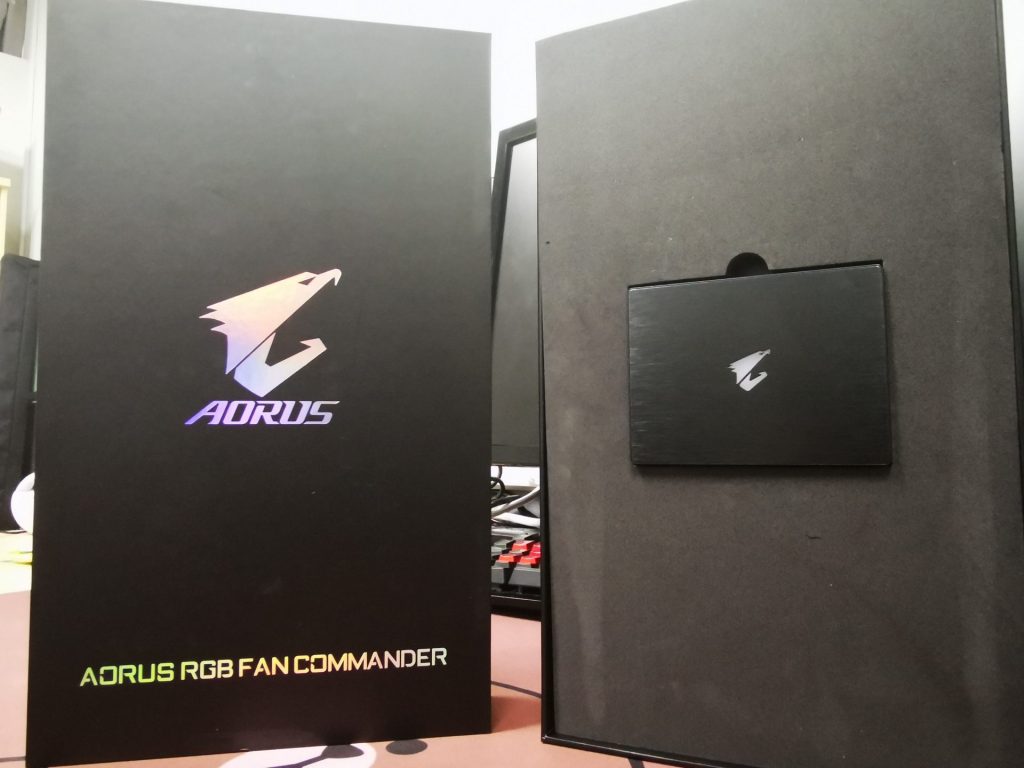 The RGB FAN COMMANDER is a fan controller that also supports the addressing of RGB lighting on the supported fans. This module can power up to 8 additional fans on the system, and only draws power from a single SATA cable. The package also comes with all the required RGB fan cables, as well as a motherboard sync cable to allow the RGB FAN Commander to work with the RGB Fusion software on the motherboard.

Even though 10Gbps Ethernet has yet to become mainstream, the growth of data size is slowing pushing the market to adopting faster network interfaces. The decision to bring 10Gbps Ethernet to the Z390 AORUS XTREME opens the motherboard up to many other use cases, rather than just the usual gaming or processing. The motherboard can potentially be used as a server for various bandwidth hungry applications. It can be used as a high end file server that processes and serves critical files at great speeds to its clients. It could be really interesting to see what kind of applications and services developers can build with a new 10Gbps Ethernet interface to enable new possibilities. 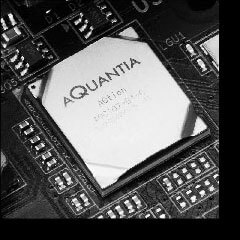 Of course, do take note that the AQUANTIA ® AQC107  10Gbps Ethernet network controller on this motherboard is still backward compatible with 5GBASE-T/ 2.5GBASE-T/ 1000BASE-T/ 100BASE-TX as well. 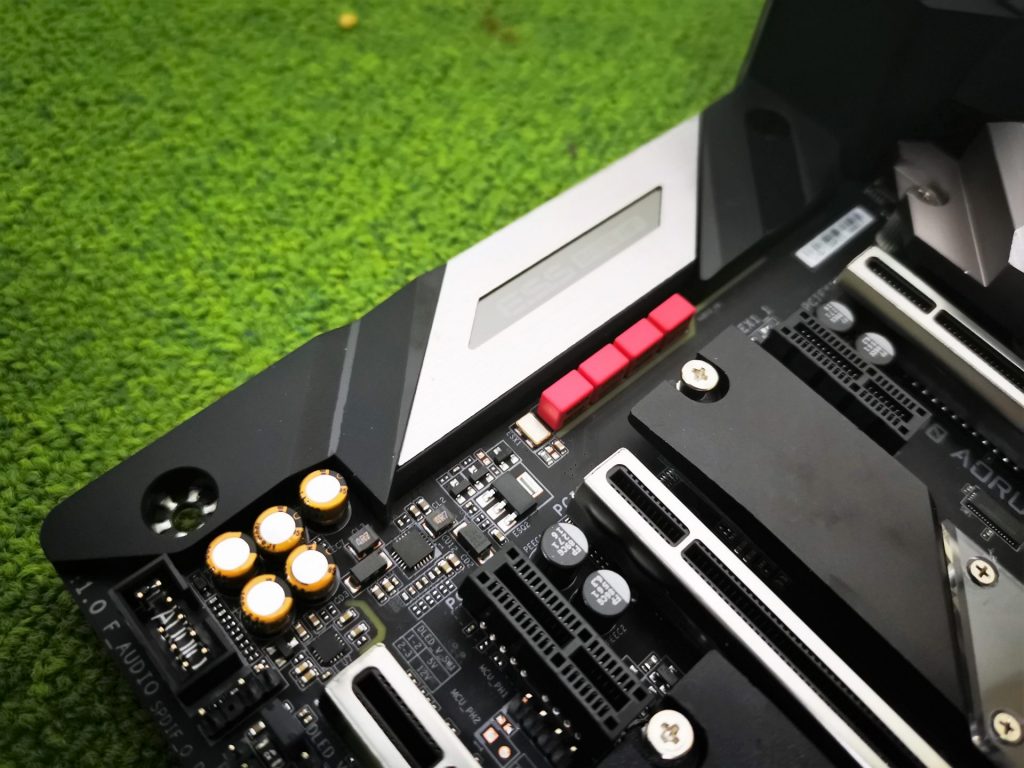 Gigabyte has made an extra effort to providing truly high quality audio output from the motherboard. They have went through the trouble of every single required step for a good audio directly from the motherboard. Firstly, digital audio produced from the Realtek ALC1220 codec is converted to analog signals via the high-end ESS SABRE DAC. This DAC understand digital signals well, and produces high dynamic range of frequencies for high-resolution music. The stereo channel is then passed through two signal processors individually for both left and right channels, and then further amplified. Audiophile grade capacitors are in place to deliver true acoustic sounds, which are then output through the gold plated audio jacks at the I/O area. With such a audio circuitry design, what else can you expect from the onboard audio solution? 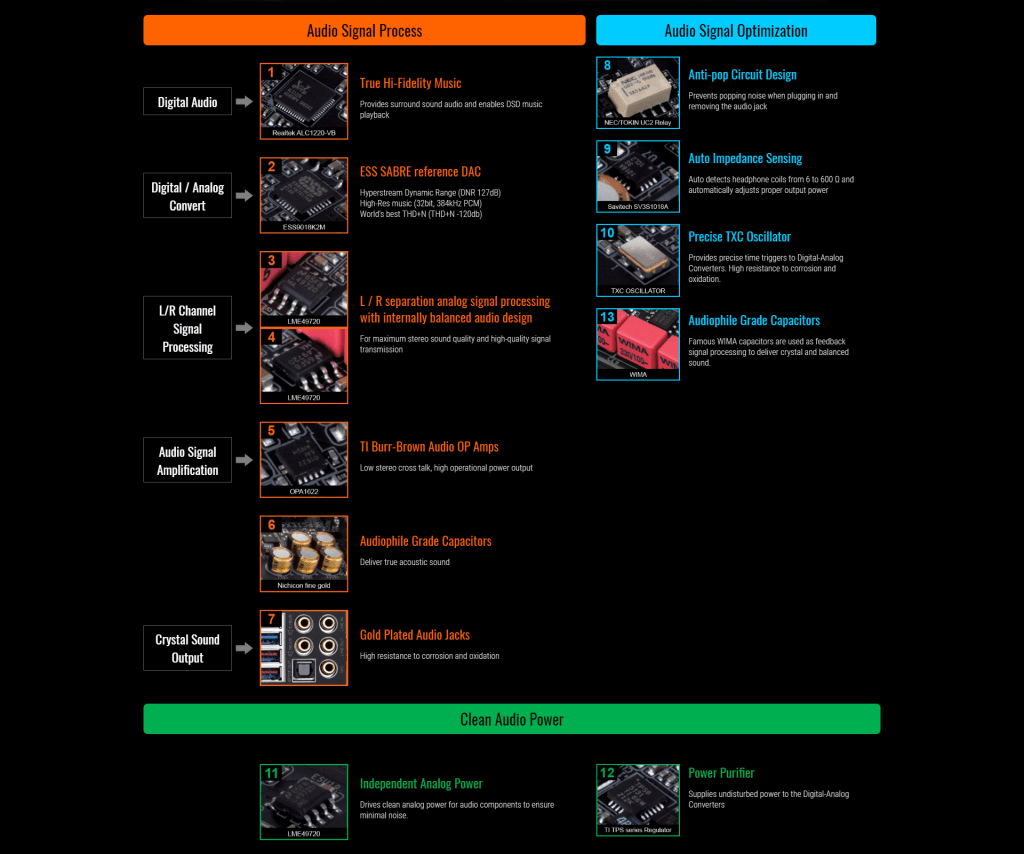