PARENTS AND CHILDREN UNITE OVER FEAR OF STRANGERS GETTING UP CLOSE AND PERSONAL ONLINE, SAYS INTEL SECURITY “2015 TEENS AND THE SCREEN” SURVEY

Home » PARENTS AND CHILDREN UNITE OVER FEAR OF STRANGERS GETTING UP CLOSE AND PERSONAL ONLINE, SAYS INTEL SECURITY “2015 TEENS AND THE SCREEN” SURVEY

PARENTS AND CHILDREN UNITE OVER FEAR OF STRANGERS GETTING UP CLOSE AND PERSONAL ONLINE, SAYS INTEL SECURITY “2015 TEENS AND THE SCREEN” SURVEY
Intel Security study provides an insight into the behaviour and opinions of young Singaporeans online including social media usage, safety and cyberbullying. 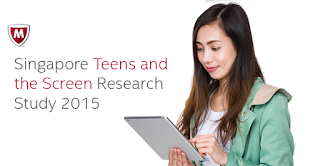 Singapore – October 29, 2015 – Intel Security today announced the Singapore findings for its “2015 Teens and the Screen” study, which examines the online behaviours and social networking habits of pre-teens and teens aged 8 to 16 years (children) in Singapore. In addition, for the first time this year, the study also surveyed the concerns of Singapore parents.
Of the parents surveyed, about 69 percent follow or are connected with their children, in the hopes of gaining access to their interactions with followers and friends, as well as the information they post. In fact, 89 percent indicate that they would monitor all of their child’s online activities across all devices if they could, while 52 percent know the password that would give them access to any of their child’s devices, apps and social media channels.
On the other hand, 61 percent of the children would hide some or all of their online activity from their parents, with 59 percent claiming they would change their online behaviour when they knew their parents were watching.
However parents and children do agree on one thing – when it comes to online activities, the worst thing that can happen is a stranger discovering a child’s whereabouts and personal information. This is a concern for 61 percent of parents and 49 percent of children. This concern is warranted given that out of the 75 percent of children who claimed to be active social media users, nearly half (48 percent) have posted the name of their school and 19 percent have posted their phone number.
85 percent of parents have had conversations with their children about the risks of social media, and 84 percent find it important that their children receive online safety or cybersecurity training to learn how to keep their personal information and themselves protected. The survey findings also indicate that children agree with their parents about this, with 71 percent of them learning about online safety in school and 64 percent picking it up from their parents.
“Parents should regularly and openly discuss online behaviour with their children, including the associated risks alongside the benefits they enjoy from such activities,” said David Freer, Vice President, Consumer APAC at Intel Security. “An open dialogue between parents and children along with the right tools empowering parents to protect their family online can go a long way.”
“Children today are accustomed to the Internet and gravitate towards the use of gadgets,” said parent and blogger Edmund Tay. “Parents can ensure their children do not spend too much time online by getting to know their interests online and offline, and encourage the participation of common activities together.”
TOUCH Cyber Wellness manager and senior coach Chong Ee Jay said, “Simply telling your child not to talk or meet with strangers may no longer be sufficient in the digital age, where barriers between people simply no longer exist. Parents have the unique challenge of communicating the potential risks and precaution to take so that the digital world remains a safe place for all children.”
Other Study Highlights:
A Bit of Mischief
Cyberbullying Causes
Social Media Sites
Posting for Likes
Adult Online Friends
For further information, please see attached Data Sheet and visit: intelsecurityapac.com/digitalsafety
Top 5 Cyber Parenting Tips to Help Facilitate Online Safety:
1. Connect With Your Kids. Engage them frequently about online risks, and make sure the communication lines are open. Foster discussions around relevant news stories or cases at schools.
2. Set Password Rules. To show camaraderie and trust, teens may share their social media passwords with friends or acquaintances. Friend or not, this is a dangerous practice. Explain to your child the consequence of this practice so that they can understand why their passwords need to remain private.
3. Use App Reviews. By reading app flags, age restrictions (ranks include: everyone, low maturity, medium maturity, or high maturity) and customer reviews on an app, you will be able to discern if an app is going to be suitable for your child or not.
4. Gain Access. Parents should have passwords to their children’s social media accounts and passcodes to their children’s devices to have full access.
5. Up Your Tech Knowledge. Stay one step ahead and take the time to research the various devices your kids use. Stay knowledgeable about the newest and latest social networks. While you don’t have to create an account, it is important to understand how they work and if your kids are on them.
Quantitative Methodology
Intel Security commissioned MSI International to conduct the online survey among 8,026 children and teens ages 8 to 16 and 9,017 parents worldwide. The survey was conducted in United States, Canada, Brazil, UK, Germany, France, Spain, Japan, Australia, Singapore and India. In Singapore, 1,002 participants filled the online survey (501 parents and 501 children aged 8 – 16). The online interviews were conducted from April 28-May 12, 2015.