The Fusion 15 is a new lineup of Gaming Notebook launched by Singapore’s homegrown Dreamcore PC. It’s their first foray into the considerably competitive performance notebook market, with the likes of ASUS, MSI and even local brands such as Aftershock. To Dreamcore, the Fusion 15 brings to the table great performance and value, and is targeted for both gamers and content creators.

Similar to the Dreambook Touch 15, the Dreamcore Fusion 15 is actually a white-labeled reference design notebook from Intel. More specifically, it is the Intel NUC X15. Dreamcore has taken the reference design and branded it as the Fusion 15 to be introduced to the market. The good thing about such a product is that it has been tried and tested by a reputable company (Intel), and has already been in the market under various brands, such as the Eluktronics MAG-15R and the XPG Xenia 15. Therefore, you shouldn’t worry too much about its reliability and design.

Branding aside, it makes us simply wonder how the Dreamcore Fusion 15 is designed and how it actually performs. Even with the latest 12th Generation Intel Core processors already in the market, is it wise to purchase a new notebook product that is still based on the 11th Generation? Is the laptop actually good enough for both professional content creation and gaming? In this article, we are going to have these questions answered.

The Dreamcore Fusion 15 comes with a rather minimal design. Unlike major brands that like to include various motifs and stylings in order to show off their unique brand, the Fusion 15 has kept things simple. Generally, its design isn’t too “loud”, and could be appreciated by those who want to use it in a professional setting. Regardless, there are still some elements of design that tells us that the Fusion 15 is meant for gamers as well. Specifically, it has a RGB LED backlit keyboard, and also an accented RGB LED lighting effect built in to the front of the device. Thankfully, all these lighting effects can be switched off or customized depending on your preference.

One of the key advantage of the Dreamcore Fusion 15 is that it comes in various kinds of configurations. You can easily choose the one best suited for you in terms of budget and performance requirements. The Fusion 15 comes either with a NVIDIA GeForce RTX 3060 or the GeForce RTX 3070. There is also a choice between a FHD 240Hz or a QHD 165Hz display panel. You can then customize the specifications of the notebook with the amount of RAM and storage required best suited for your usage of the notebook. To put it simply, as long as you know what you want to do with your new performance PC, the Fusion 15 will be able to cater to your needs. Moreover, the whole notebook weighs only 1.94Kg. It’s considerably light, putting into considerations the performance it provides.

For a notebook of its class, we’ve got to say that the Fusion 15 is comparatively compact and light. As for its design, its think bezel design also makes it look modern and sleek. On top of that, the laptop is also well equipped with a host of expandability options and ports for maximized compatibility with external peripherals and devices.

On the left of the device, we spotted a Kensington lock port, a USB 3.2 Gen2 Type-A port and a Audio Combo jack. Interestingly, there are also ports found at the rear of the notebook. At the rear, we can see the DC-In power jack, Gigabit Ethernet port, a full-sized HDMI Port and the Thunderbolt 4.0 Type-C port. 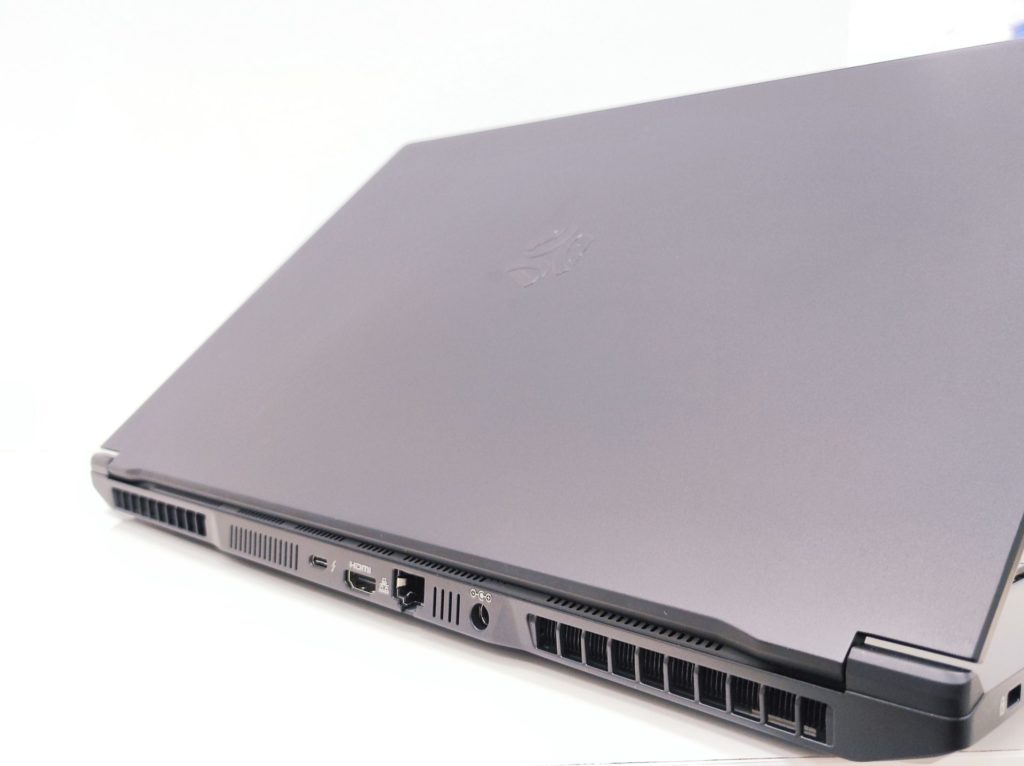 On the right side of the device, there are two more USB 3.2 Gen2 Type-A ports and a SDXC card slot. 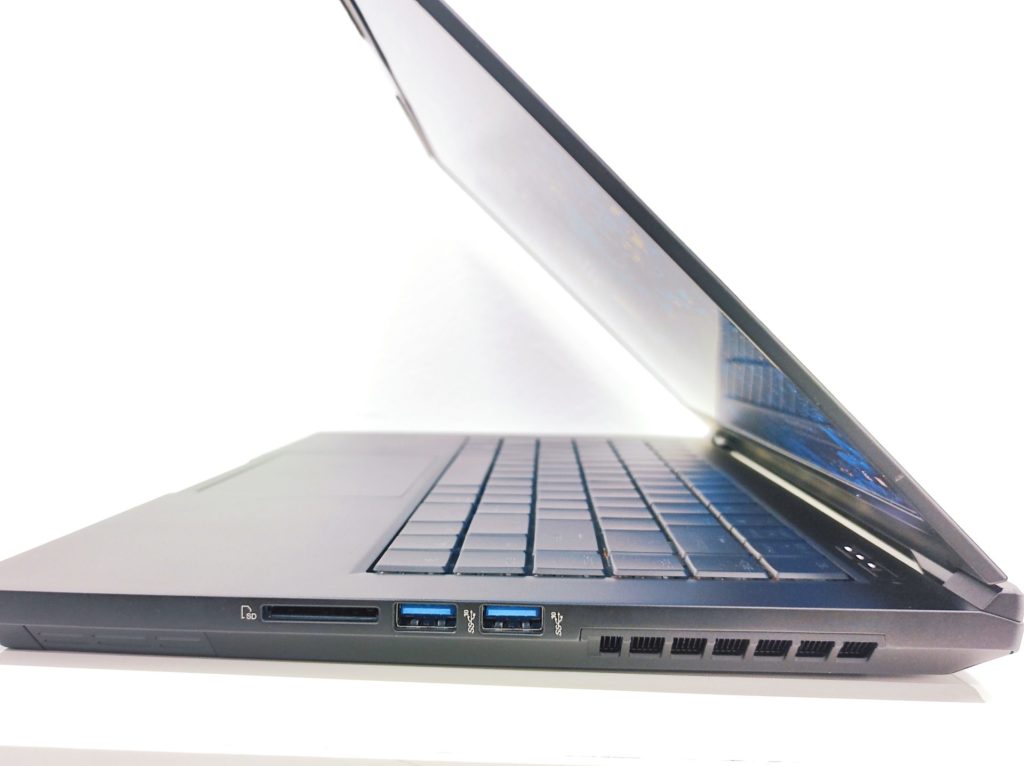 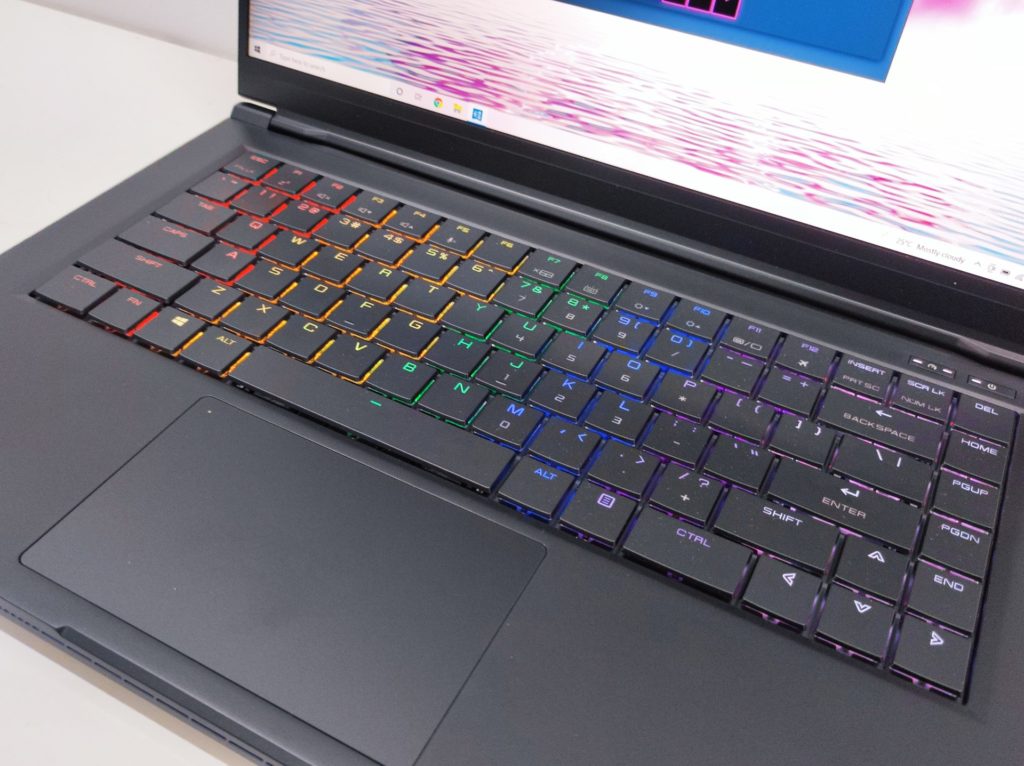 One of the most attractive feature of the Dreamcore Fusion 15 is its use of an optical mechanical keyboard. Unlike typical membrane based keyboard, the Fusion 15 just feels so different when typed on. Each keypress feels more firm and “solid”, as good as what you can get on a low-profile desktop keyboard. The experience is one that’s hard to forget, and sets the Fusion 15 apart from competition. Moreover, as the keys are also well-spaced, we spent no time at all getting used to typing on the Fusion 15.

As for the trackpad, it was also very responsive and meets our expectations. We’ve got our fair share of experience on poor performing trackpads on laptop, so we do appreciate the trackpad on the Fusion 15.

Moving on, we’ve got to say that the 240Hz 1080p IPS panel makes the Dreamcore Fusion 15 what it is. With a 240Hz display, using the notebook just seems so much more responsive as compared to the usual 60Hz displays. It also made playing games that are capable to run at high framerates buttery smooth. Generally, this notebook had worked great for the games we tried it on.

Unfortunately, despite all the good points mentioned above, there are a few glaring flaws on the Fusion 15 – The Dreamcore Fusion 15 runs hot. 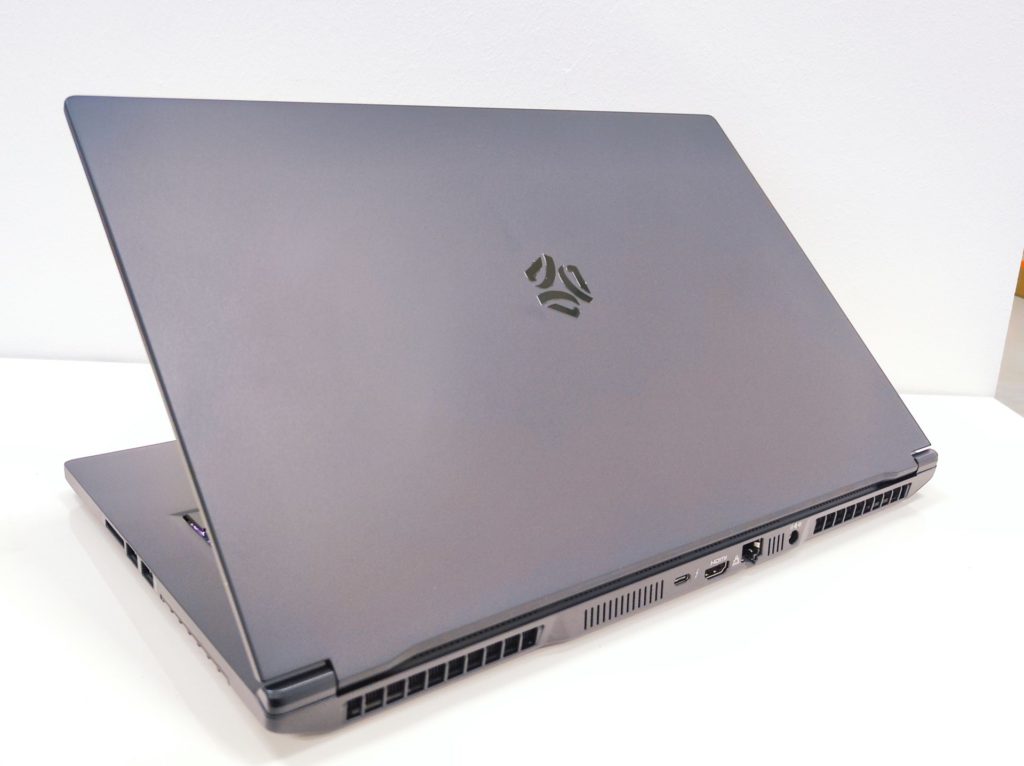 In order to tame the heat, the notebook has to tune up its fan speed, causing a rather annoying and loud fan noise that spoils the usage experience of the laptop. Nonetheless, I guess this issue can be resolved when you plug in your headphones.

However, pertaining to the heat, as the notebook draws air from the rear of the laptop and expels it through the sides, you will actually feel the hot air blowing at your hands when using the laptop. This will particularly affect you if you are using a mouse with your keyboard. Since the placement of your hand and mouse is typically to the right side of the laptop (if you are a righty), you will constantly have hot air blowing at your hands. And trust me, the system does run quite hot when you’re playing games or doing any compute intensive work. It’s going to get uncomfortable. We will compare the Dreamcore Fusion 15 with the AORUS 17G. The AORUS 17G comes with the RTX 3080 Max-Q and the Intel Core i7-10870H. It should show us how much performance difference there exists between the 11th Generation and 10th Generation Intel Core processor. Moreover, since the RTX 3080 Max-Q is considered crippled from its full form, we will also be able to see how the full-fledged RTX 3060 performs against its supposed bigger brother.

To further put things into perspective, we will also throw in the AORUS 17 XE for comparison. The AORUS 17 XE comes with the newest 12th Generation Intel Core processor and the months old RTX 3070Ti.

The settings of the tests are as follows: 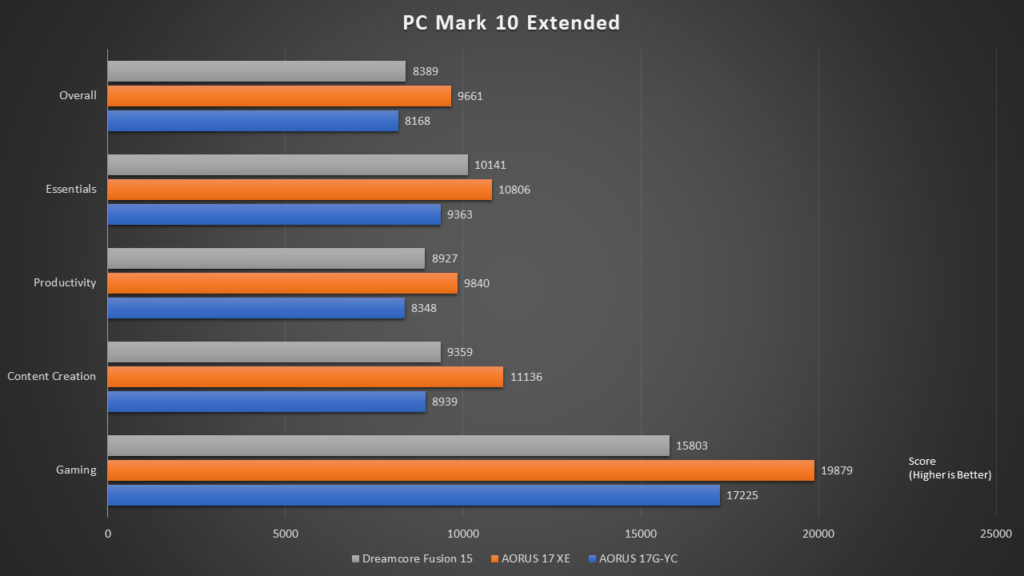 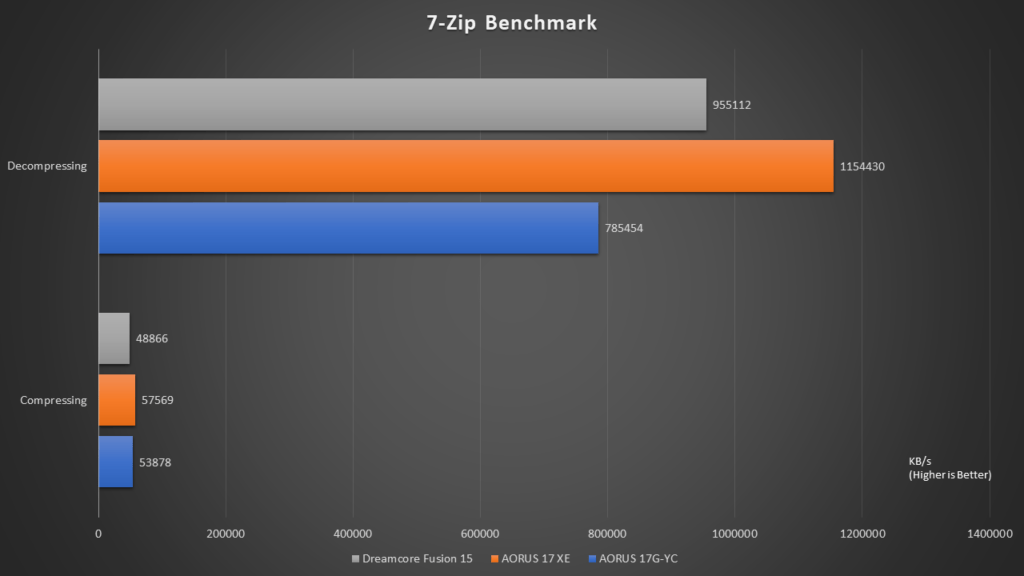 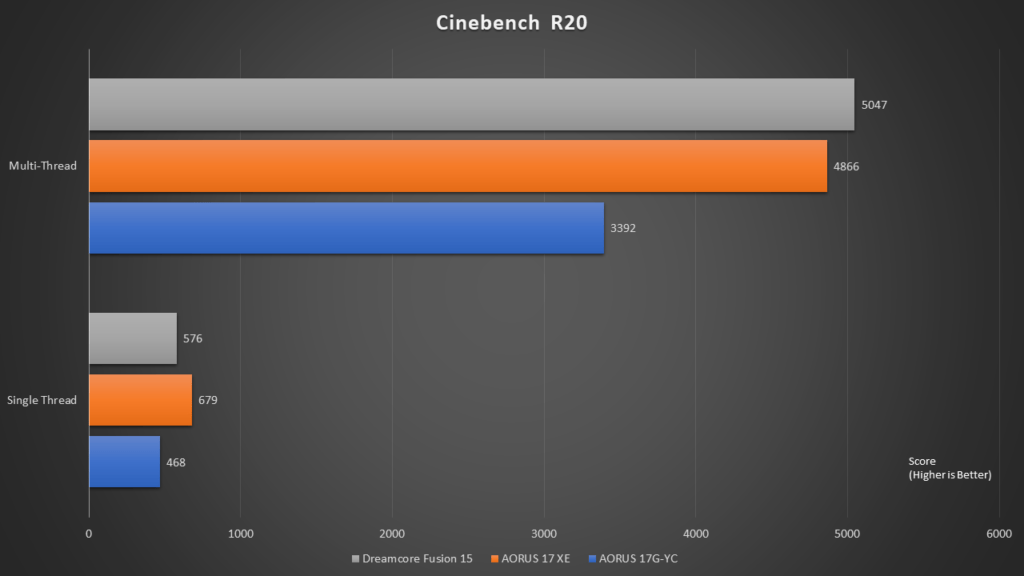 What’s interesting is that the Dreamcore Fusion 15 was able to perform extremely well in a multi-threaded test. It performed even faster than the latest 12th Generation Intel Core i7 processors. This is because the latest 12th Gen Intel Core processors utilize a hybrid core architecture, which split the processing cores into Performance cores and Efficient cores. On the other hand, the 11th Generation Intel Core i7 11800H processor on the Dreamcore Fusion 15 had all full-fledged high performance cores. This allows the processor to perform even faster than expected. This is also one of the benefits of having an 11th Gen processor as compared to the latest 12th Gen. 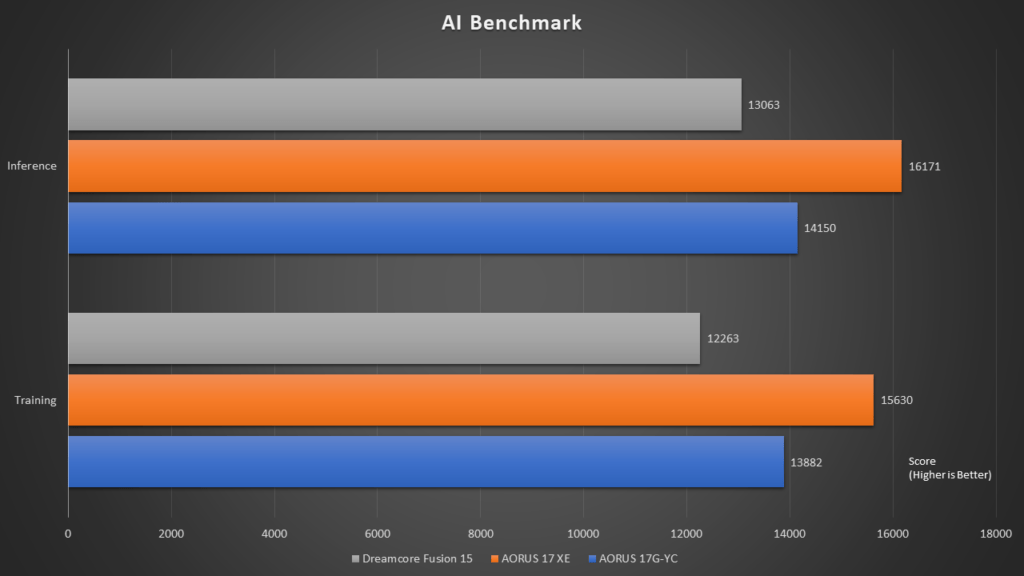 For AI inferencing and training, a lot is focused on the number of dedicated CUDA cores on the graphics processing unit. As the NVIDIA GeForce RTX 3060 has the least number of CUDA cores out of the other two laptops, it performed slightly worse. This is expected. Similarly, the Blender test also showed how much better the Dreamcore Fusion 15 performed over the two other competing notebook computers. 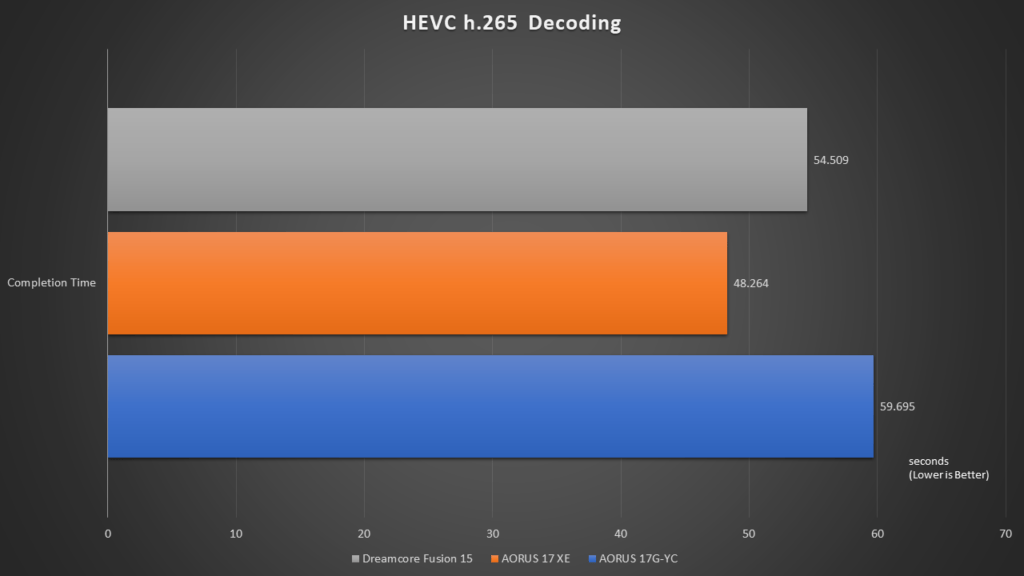 As for media decoding, the Dreamcore Fusion 15 performed well. It has a performance level between the other two AORUS machines. The Dreamcore Fusion 15 was able to play all the games in our test without much efforts. The games were running very smoothly and gave good results. Of course, being a RTX 3060, it lacked behind the the RTX 3080 Max-Q and RTX 3070 Ti. However, we can see that it is actually not too far behind the RTX 3080Ti. 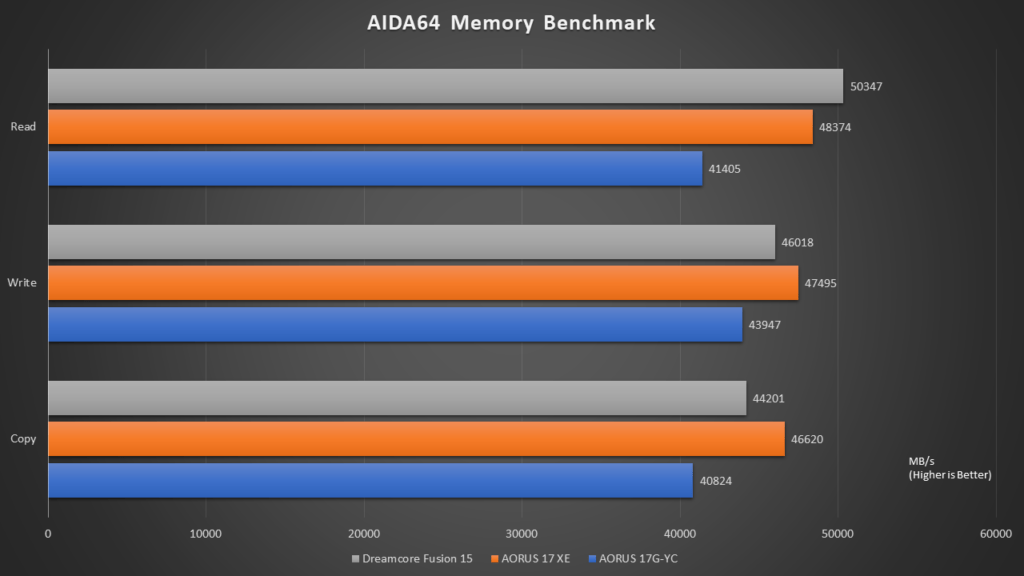 The Dreamcore Fusion 15 has 2 x 8GB DDR4 3200MHz RAM running on it in Dual Channel mode. This performance is expected. As for battery life, the Dreamcore Fusion 15 managed to score 327 minutes on the PCMark 10 Battery (Modern Office) test. This essentially means that you can do your work on the Fusion 15 for more than 5 hours continuously without worrying about it running out of battery. 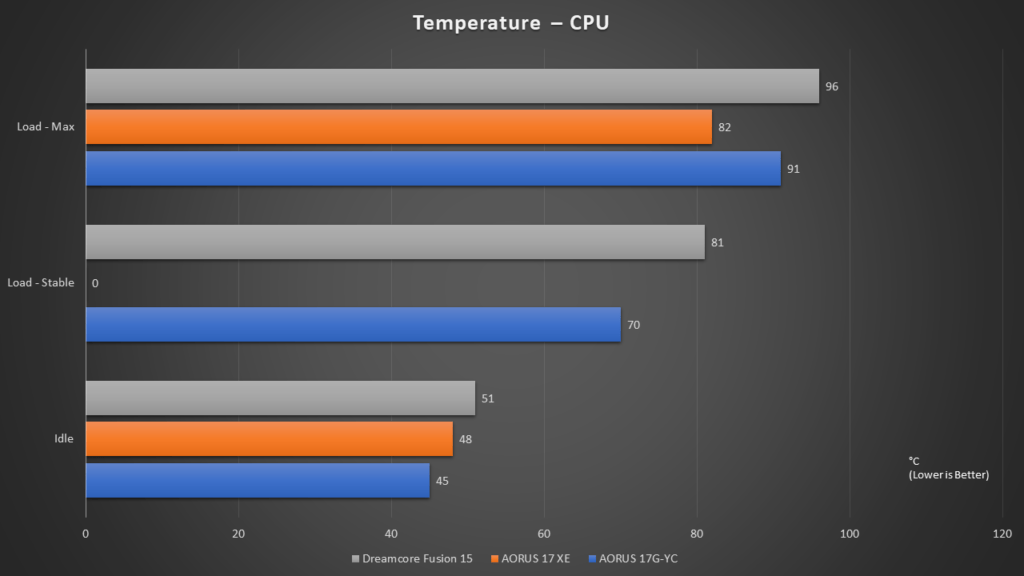 To achieve its high performance, the Dreamcore Fusion 15 needs to properly cool the CPU. However, comparing between the cooling systems of the three laptops, the Fusion 15 ran relatively hotter.

The Dreamcore Fusion 15 has met our expectations of a decent performance laptop for both work and play. It performs very well in our tests, and works adequately for both professional works and also games. The fact is that there aren’t many points to penalize the Fusion 15 in terms of its performance and design.

As mentioned, the only issue we had with the Dreamcore Fusion 15 is its cooling capabilities. Even though it was able to perform at its expected performance level, the heat dissipation mechanism and design seems flawed. Having hot air blowing directly at your hands just doesn’t seem to be a clever design.

Pricing and Availability
The Fusion 15 is available immediately for purchase at www.dreamcore.com.sg with a special launch price starting from S$2,385, a S$200 discount from its typical price of S$2,585. Users who make their orders before 28 February 2022 also stand to get up to S$170 in additional discounts and cashback. Additionally, Dreamcore is offering a bundle promotion on SuperSolid monitors for up to $730 off, for a total of up to S$1,100 in launch discounts for the Fusion 15.