ASUS ROG Maximus Z690 Hero Motherboard – How does it perform?

Now that the new 12th Generation Intel Core Desktop processors are actually available in the retail channel, together with DDR5 memory and LGA1700 CPU coolers, it’s finally practical to consider the upgrade to the latest and greatest products from Team Blue. Previously, we had the chance to take a quick look the ASUS ROG Maximum Z690 Hero Motherboard, which was proved to be well designed both aesthetically and in terms of features. It paves the way for high end gaming desktop systems in 2022 and future PC builds.

Ultimately, features are only one part of the equation. Taking a look at the other aspects of the motherboard, we are going to focus on the performance levels of the ASUS ROG Maximus Z690 Hero Motherboard in this article. 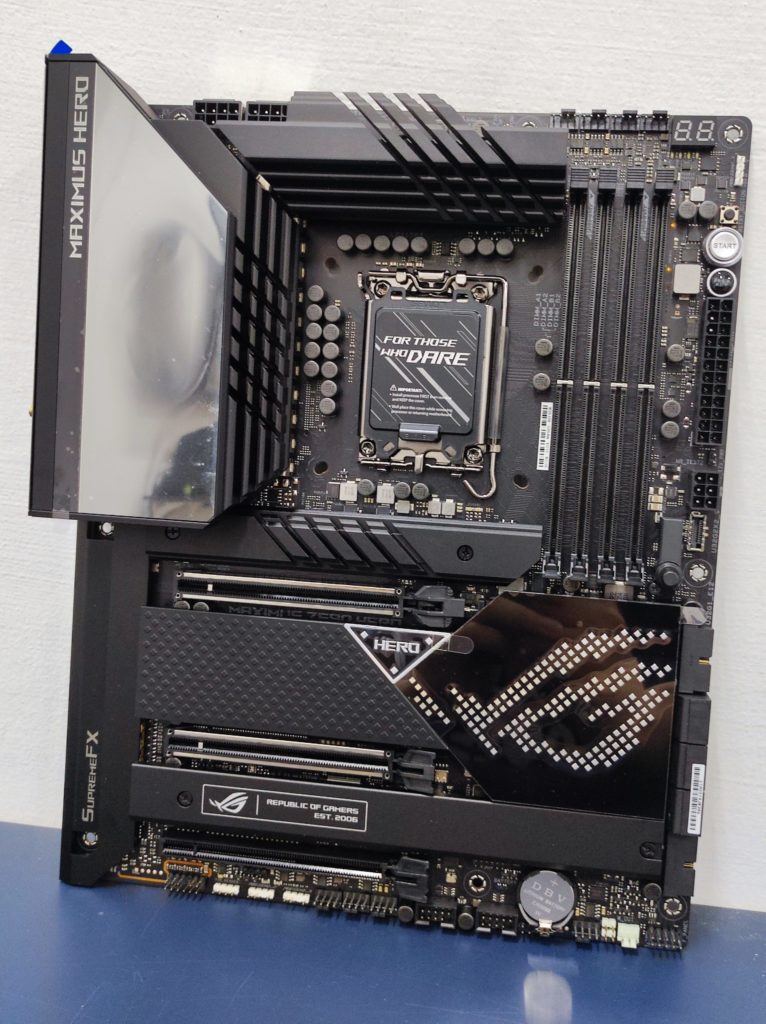 In our tests, we are going to compare the ASUS ROG Maximus Z690 Hero motherboard with the competing GIGABYTE Z690 AORUS PRO Motherboard. Even though both motherboards run on the same chipset, its power components and other configured features could have an impact on performance. Ultimately, both motherboards should perform similarly, and results should be within a certain margin of error.

We will run the following tests with the settings configured below: 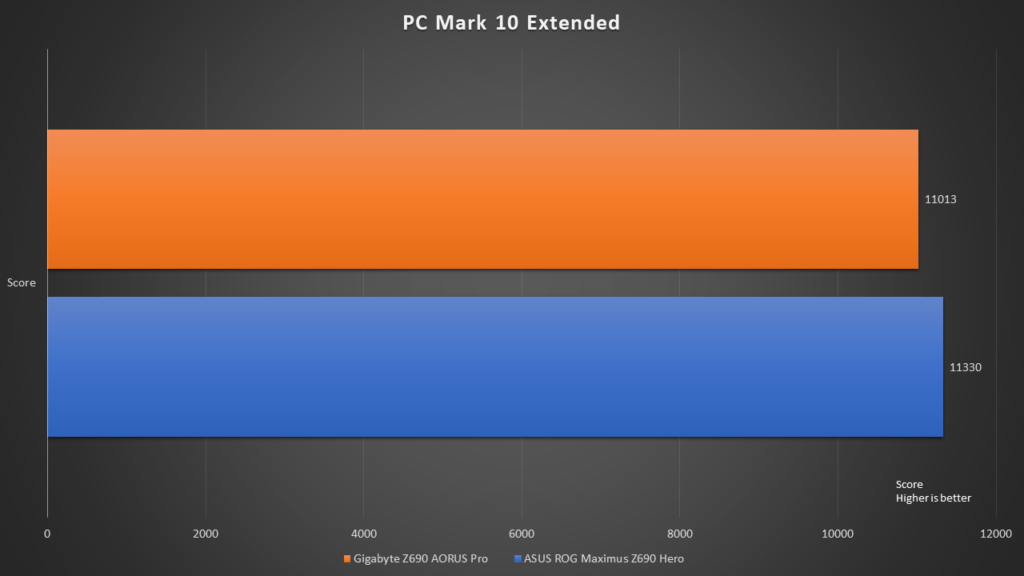 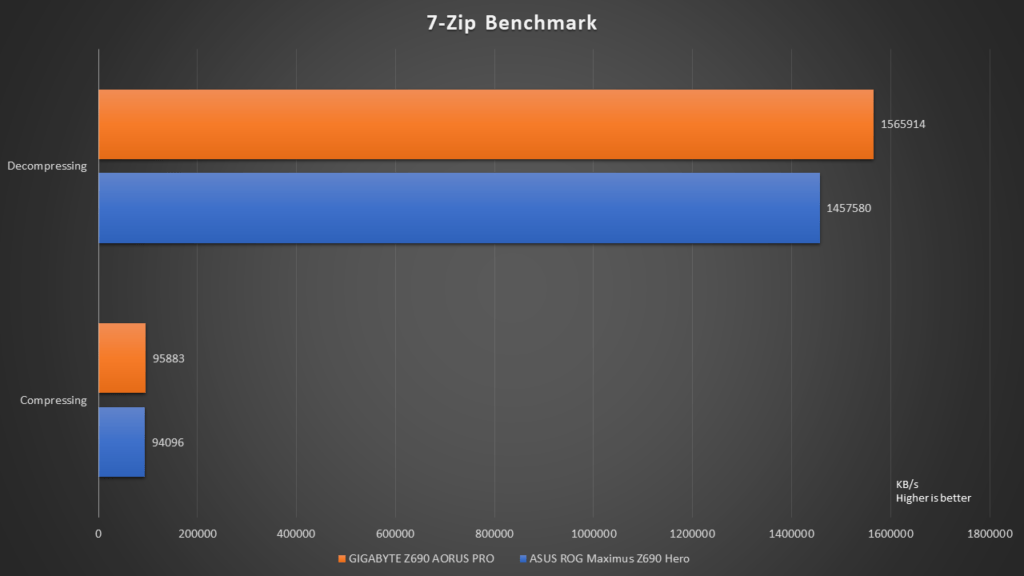 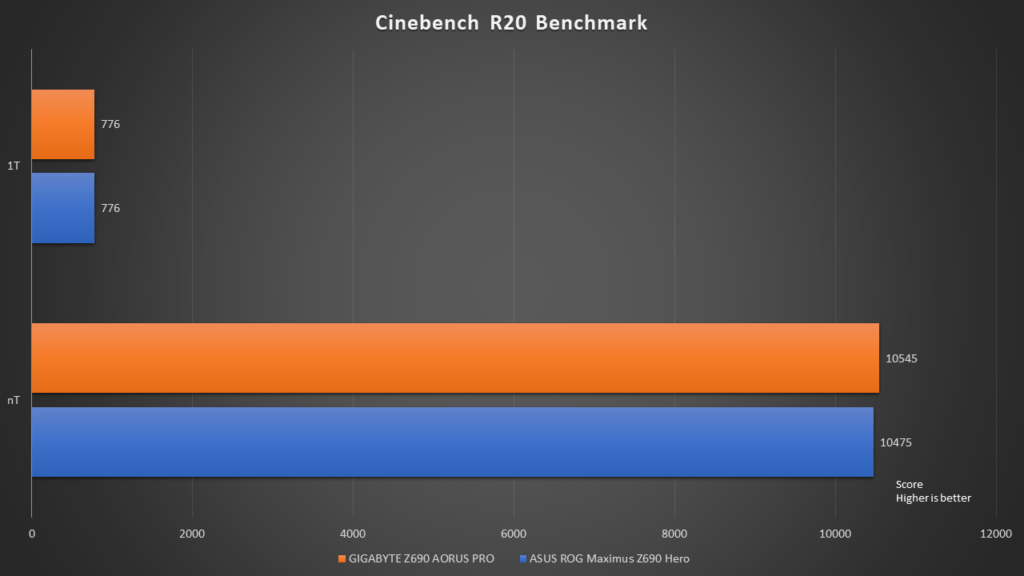 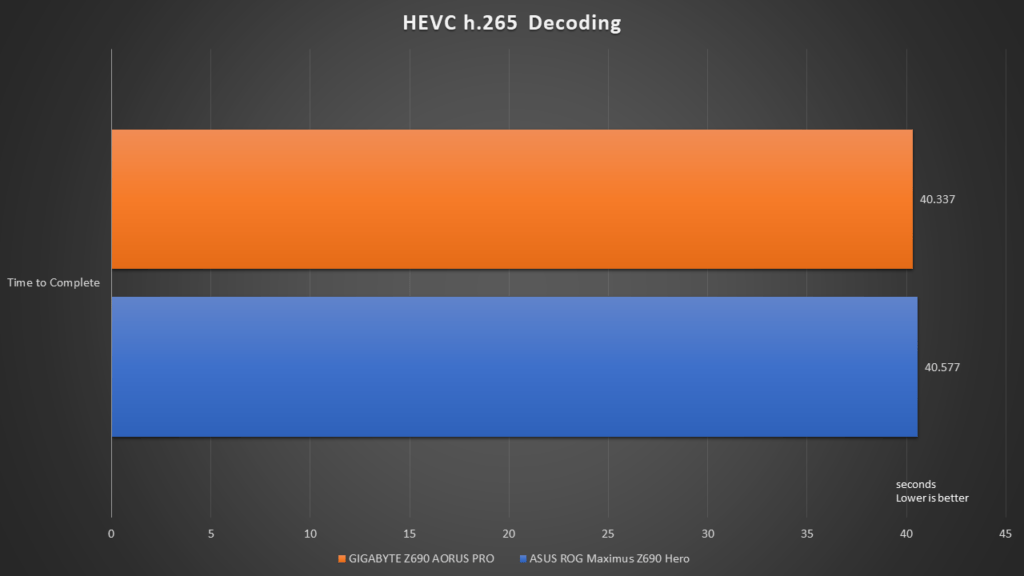 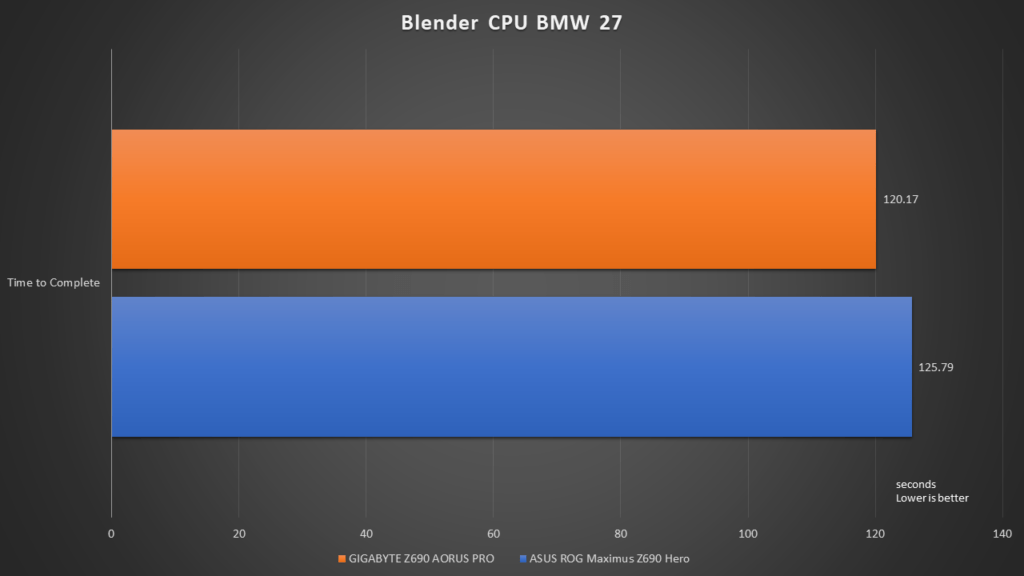 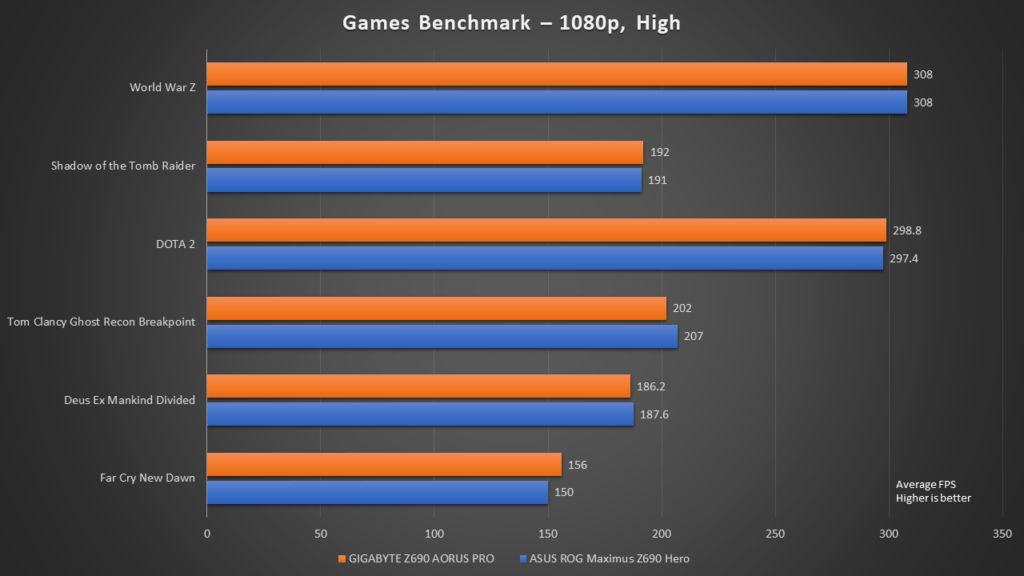 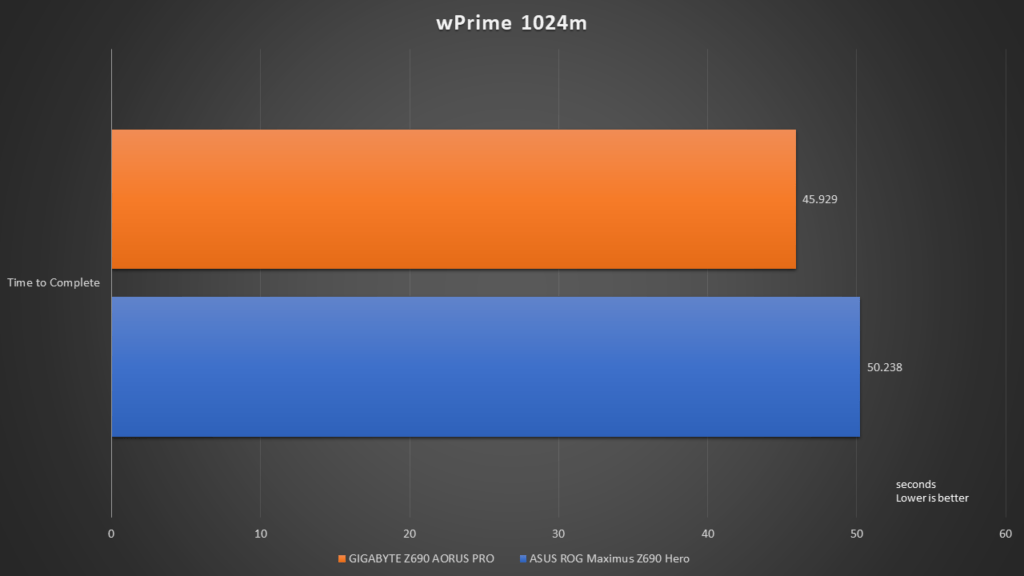 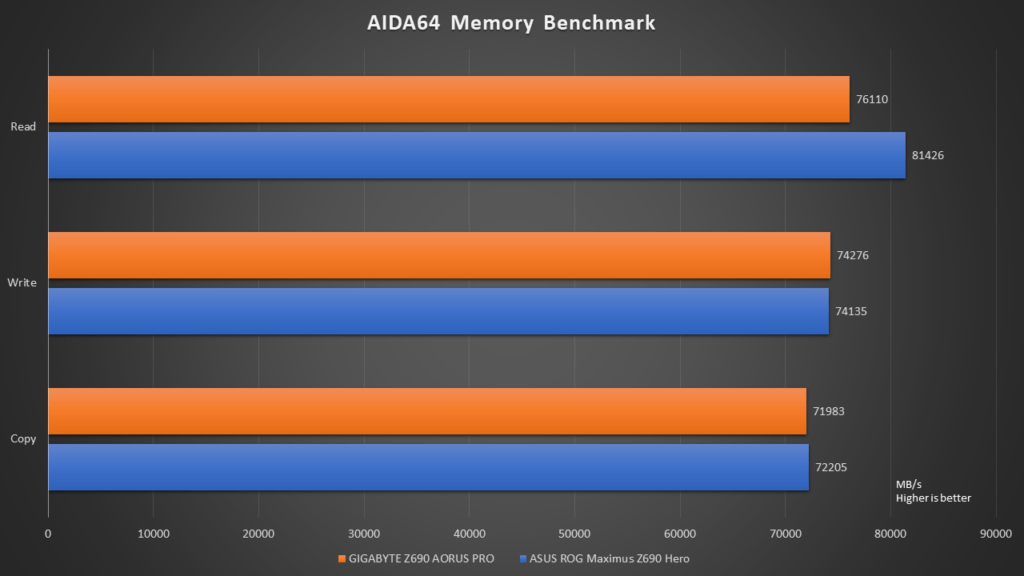 Judging between the benchmark results between the two motherboards, there isn’t too much of a difference. There are times when the ASUS ROG Maximus Z690 Hero performs faster, and others slightly slower. They are still within the reasonable performance margins.

However, there are two tests which shown significant performance difference. In multithreaded CPU application tests, the competing GIGABYTE Z690 AORUS seems to performs better. We attribute this due to thermal throttling on the ROG Maximus Z690 Hero motherboard. The motherboard applies a higher voltage across the CPU, resulting in higher temperatures. Unintentionally, this has caused temperatures to be too high than expected, resulting in thermal throttling which set its performance levels back slightly. Nonetheless, this should be resolved with a decent CPU cooler with the right mounting. (We were using the LGA1200 mount on the ROG Maximus Z690 Hero motherboard.

Another note was that the memory read speed on the competing ASUS ROG Maximus Z690 was also faster than the GIGABYTE Z690 AORUS. 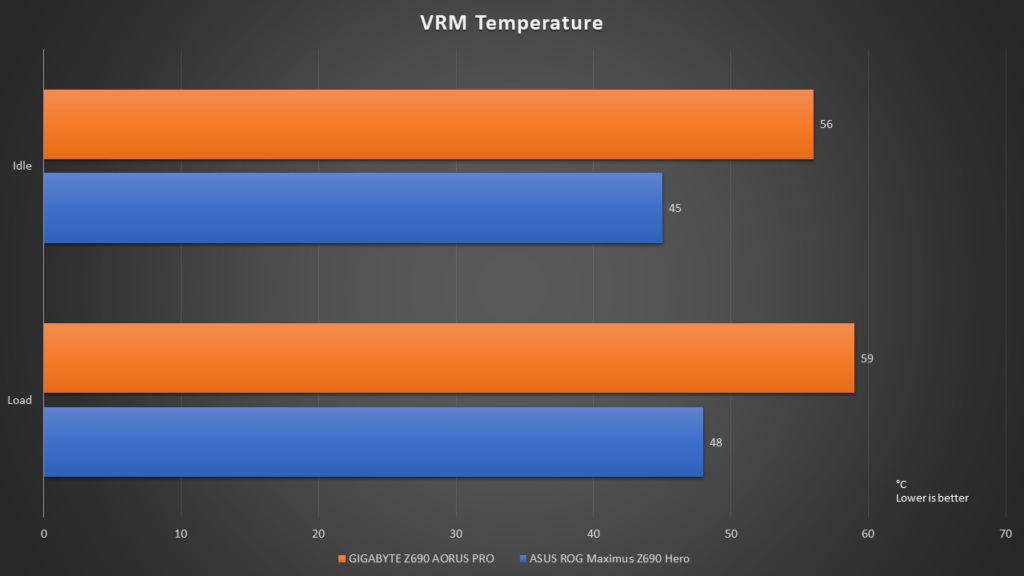 Based on the readings on the motherboard sensors, which were reported by HWInfo, the ASUS ROG Maximus Z690 hero had a much lower VRM temperature than competition. This also means that the motherboard is poised to do even more, potentially applying higher voltages across the CPU and other components to overclock the system without the side effects of VRM thermal throttling.

The ASUS ROG Maximus Z690 Hero is poised to do so much more than running the new Intel 12th Generation processors at stock settings. It has effectively kept its VRM temperature cool even in our burn-in tests, which means that it could bring even more power to the CPU when needed in overclocked scenarios. However, as the Intel Core i9 12900K processor does run hot, you need to have an appropriate cooling solution for the motherboard in order to properly fully utilize the capabilities of the motherboard.

In terms of performance, the ASUS ROG Maximus Z690 Hero has met our expectations. Added with its comprehensive and innovative set of features, it’s certainly a product to consider when you’re upgrading to the new 12th Generation Intel Core processors.

Windows 11: 5 Features You’ve Got to Check Out

Microsoft Surface Go 3 - Can it be your daily driver?