AMD continues to steal market share from their competition with their latest Ryzen 5000 series Zen 3 platform. Zen 3 is a very compelling solution for the market, especially if you are looking at high performance personal computers. Of course, to utilize a Ryzen 5000 series desktop CPU, you will also need a motherboard that supports it.

If you are in the market looking for a new motherboard that supports the latest AMD Ryzen 5000 series CPUs, your best bet will be motherboards equipped with either the X570 or B550 chipset. These are chipsets that can support and utilize the features from the Zen 3 CPU platform, which includes support for PCIe Gen4. Particularly within these two choices, we would usually recommend the B550, as it’s just a slightly stripped-down version of X570 while retaining all the key important features. Simply because of these reasons, B550 motherboards are usually more affordable than the X570 counterparts, and therefore, a more sensible choice for most.

The ROG STRIX lineup of products from ASUS is targeted specifically for gamers. It falls between the mid to high tier product range from ASUS and is designed to attract PC builders who want to build a new high-end gaming PC with good enough features.

For a start, the ASUS ROG STRIX B550-F GAMING (Wi-Fi) motherboard utilizes a rather simple black theme. This monotonal style may look somewhat boring at first glance, but it accentuates the RGB lighting is featured on the motherboard. Together with the RGB lighting effect from the heatsinks and on the motherboard itself, the overall system should still look very good when placed within a PC case. The unique ROG STRIX motifs and branding on the base PCB and heatsinks also makes the whole motherboard unique. 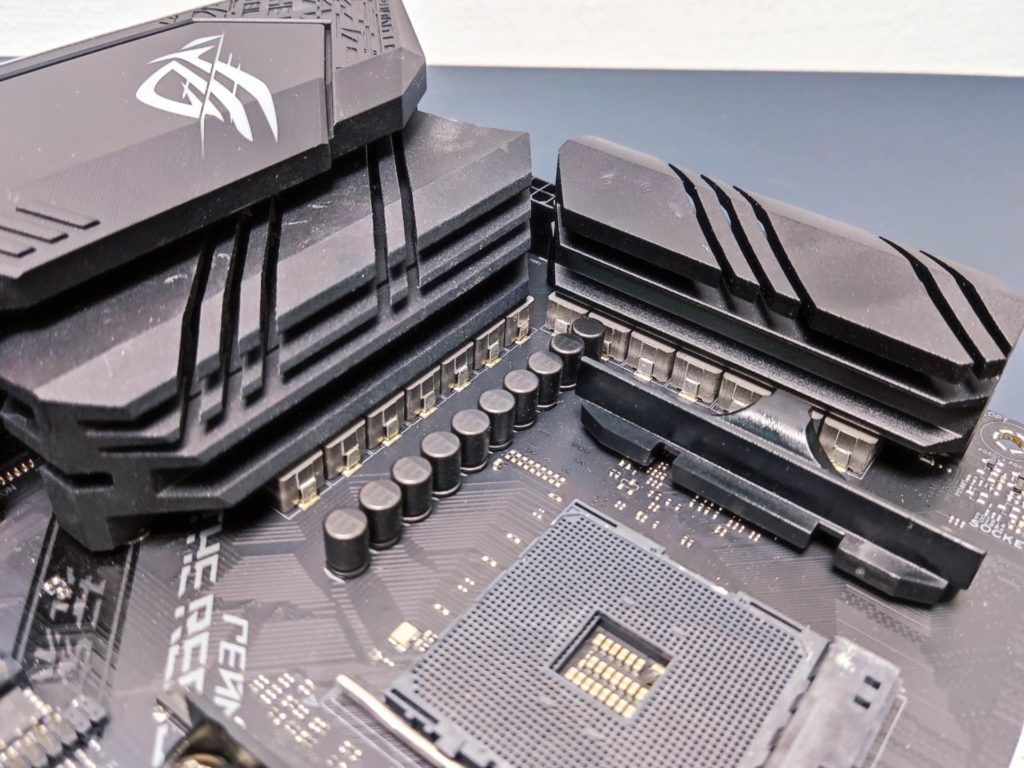 The ASUS ROG STRIX B550-F GAMING (Wi-Fi) utilizes a 12+2 Power stage digital power control design. Understandably, as the current high-end AMD Ryzen 9 5950X has 16-cores and runs at a default TDP of 105W, the motherboard must be able to properly handle such loads to ensure a reliable and stable system. The unique ASUS DIGI+ Power Control ensures the system components can operate at a stable voltage, also enabling further precise memory and CPU tuning for the best possible system performance. 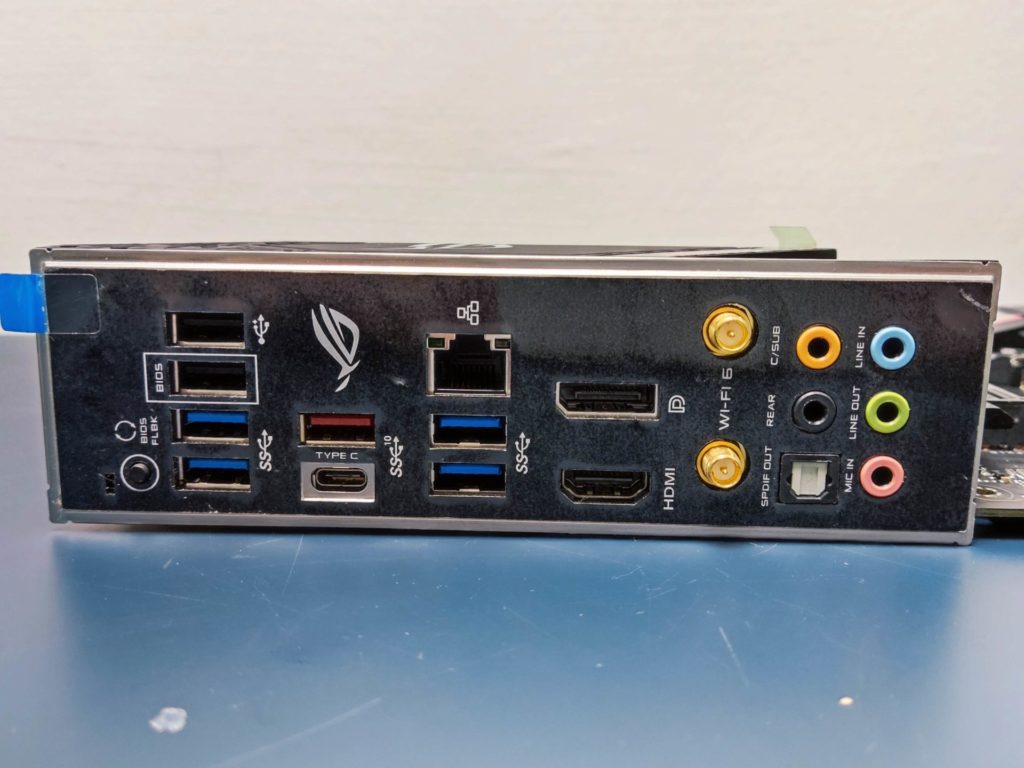 In terms of I/O, the motherboard features the following ports

Of course, one of the greatest features on the ASUS ROG STRIX B550-F GAMING (Wi-Fi) is its built-in WiFi 6 chip. If you need a system with wireless connectivity built in, this motherboard will be a great choice. You wouldn’t need to think about the costs and hassle to add an additional Wi-Fi card to the system.

We also took note that the ASUS ROG STRIX B550-F GAMING (Wi-Fi) also features Q-DIMM design, where one side of each DIMM slots doesn’t feature the DIMM lock. This ensures a better fit with large sized graphics cards. To provide enough power, so that it can operate optimally under the heaviest load with high end components, the motherboard also comes with 1 x 4-pin and 1 x 8-pin ATX 12V connectors.

For enhanced game immersion, the ASUS ROG STRIX B550-F GAMING (Wi-Fi) also comes with the SupremeFX S1220A CODEC, which is a feature that is exclusive to ASUS motherboards. This gives the motherboard better signal to noise ratio and quality. Moreover, this audio chipset and design also offers the two front-panel outputs to be driven by op amps that can deliver adequate power and amplification to high impedance gaming headsets. High quality audio components are also used on the motherboard, such as premium Nichicon audio capacitors, which is said to produce a warmer and more natural sound with great clarity. 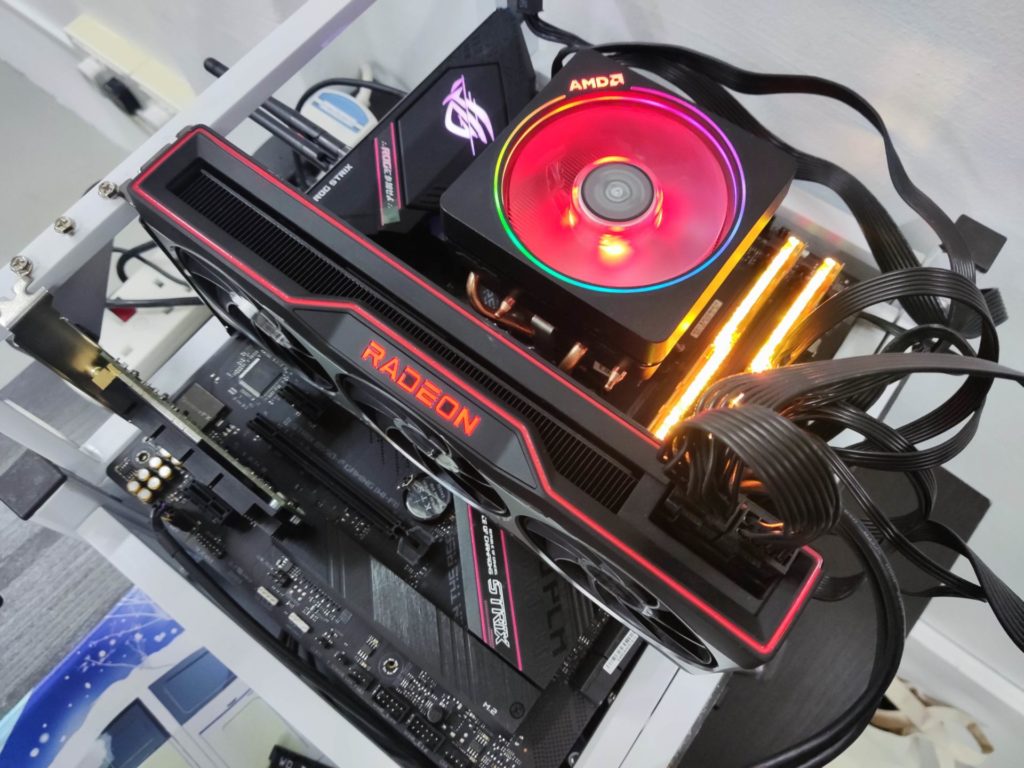 We will include the test results from the Gigabyte A520 AORUS Elite review as well, which acts as a control and also comparison for our tests. 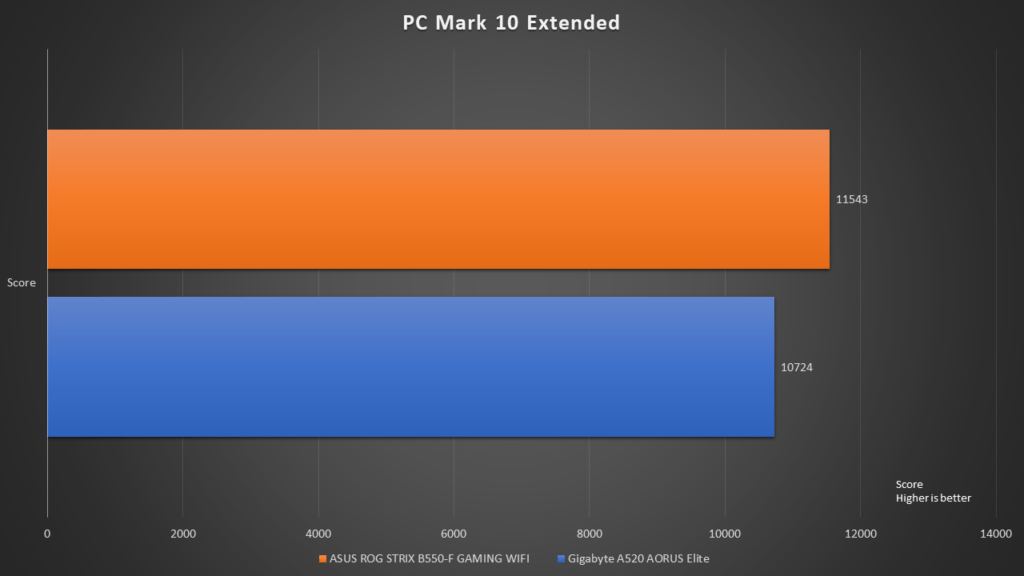 Generally, the ASUS ROG STRIX B550-F GAMING (Wi-Fi) can perform well under load. This is why when the CPU is stressed, it tends to run better. 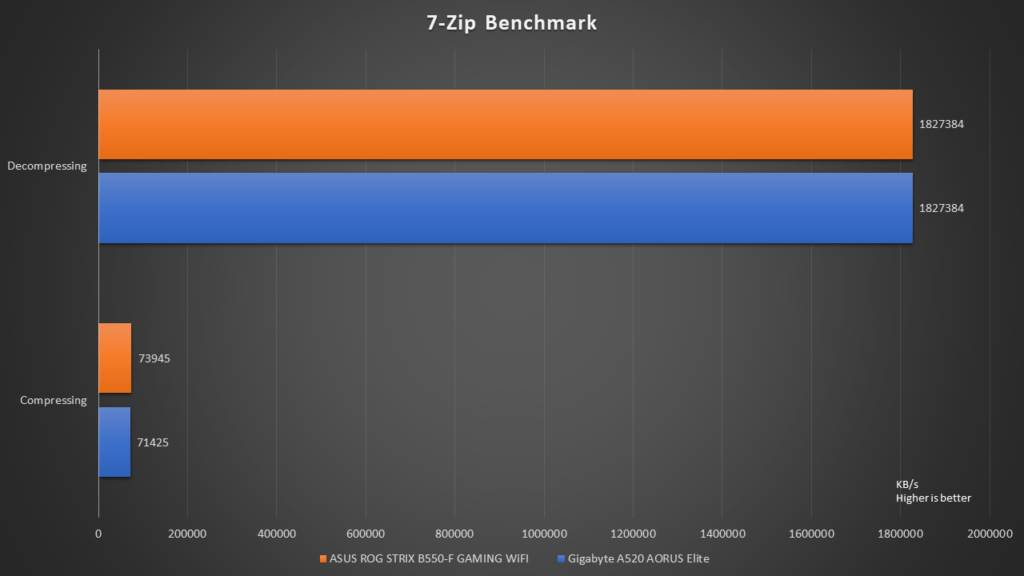 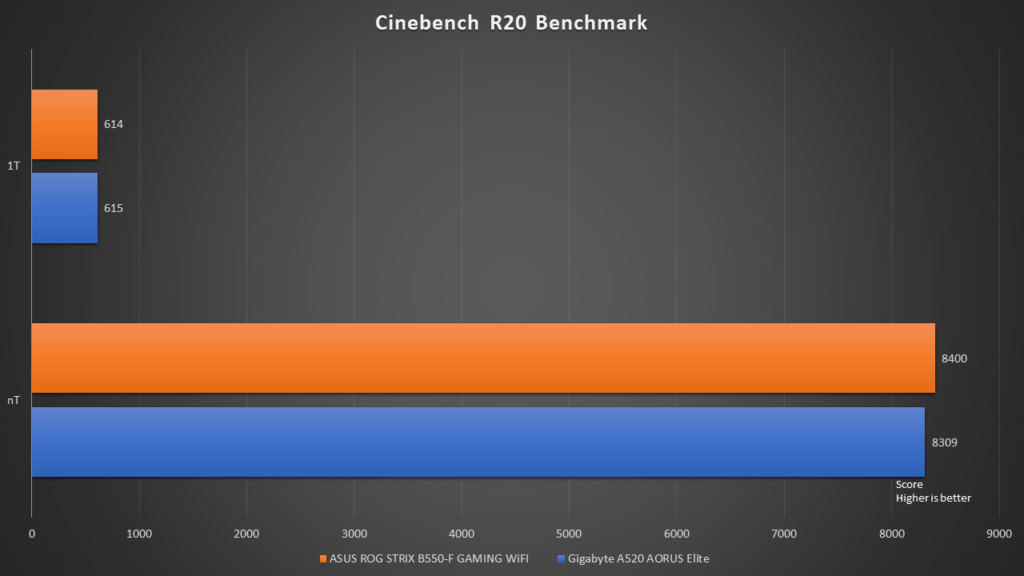 Similarly in the Cinebench R20 tests, we can see that the ASUS ROG STRIX B550-F GAMING (Wi-Fi) is almost 100 points faster as well, supporting our hypothesis that the motherboard is better at allowing the CPU to run at a higher speed when in a stressed environment. 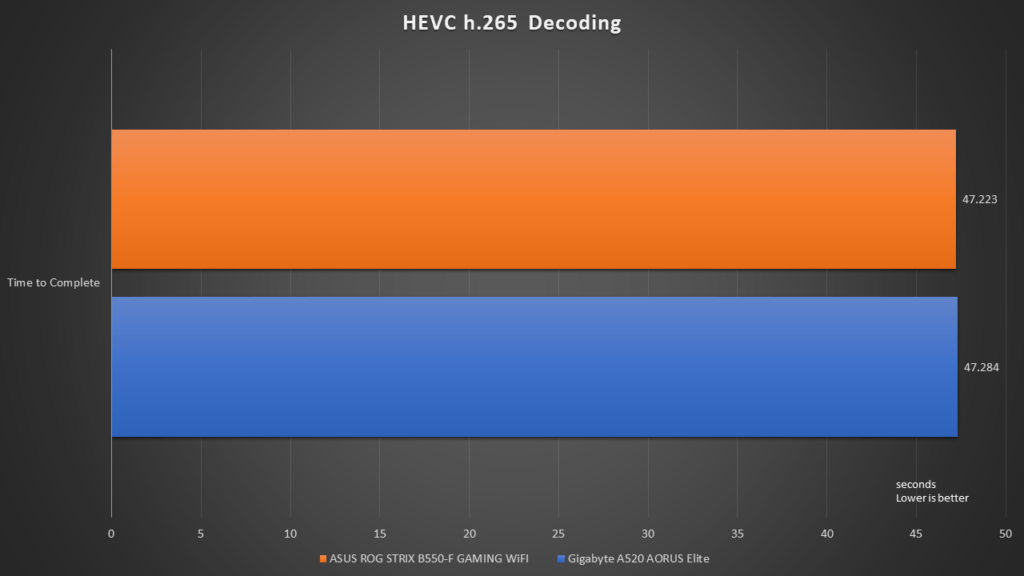 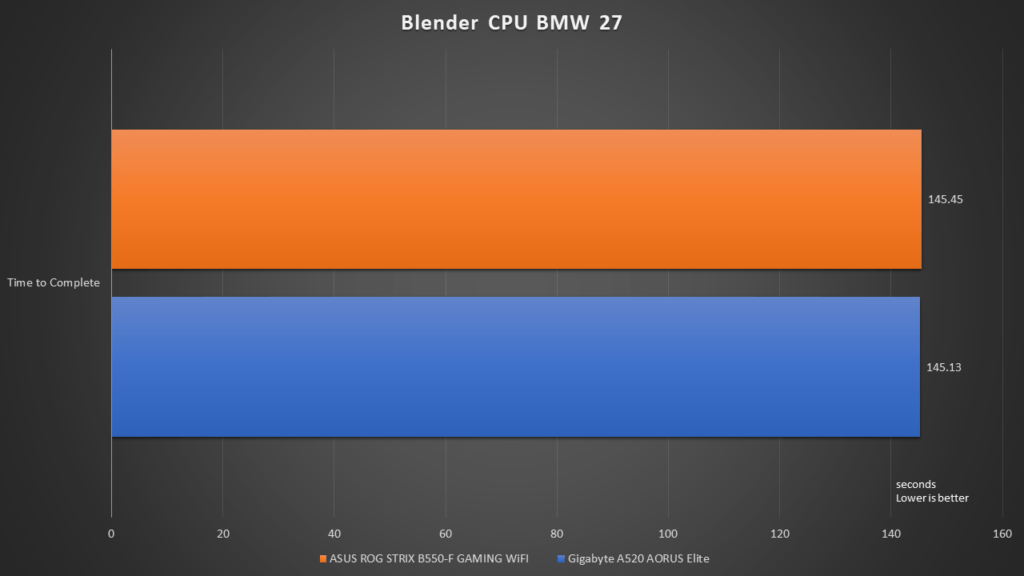 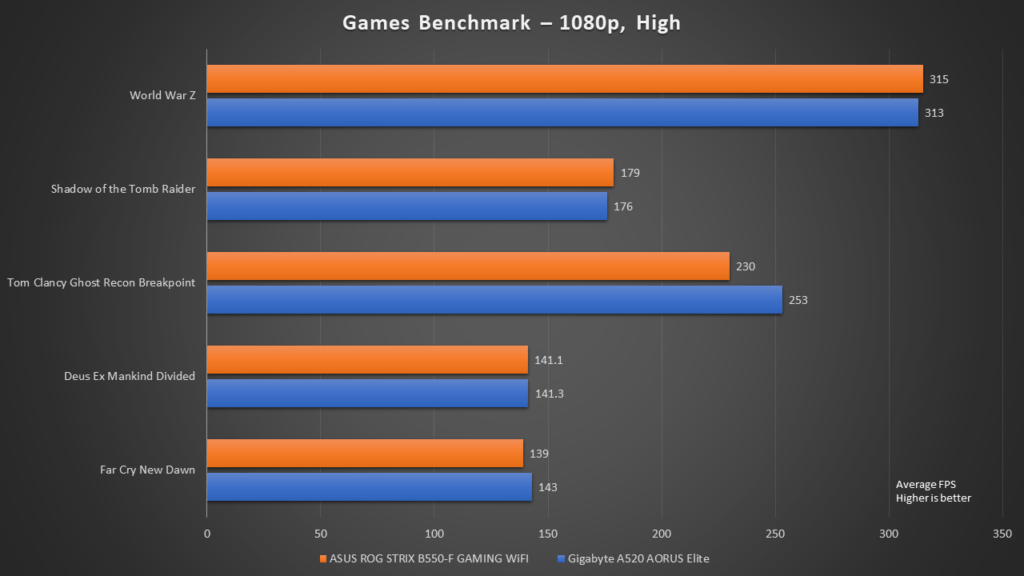 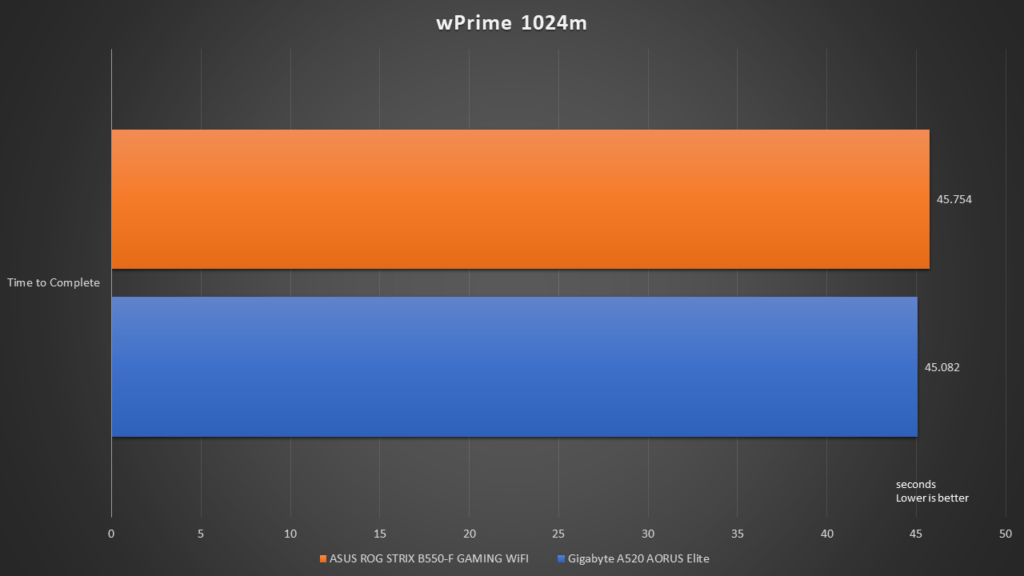 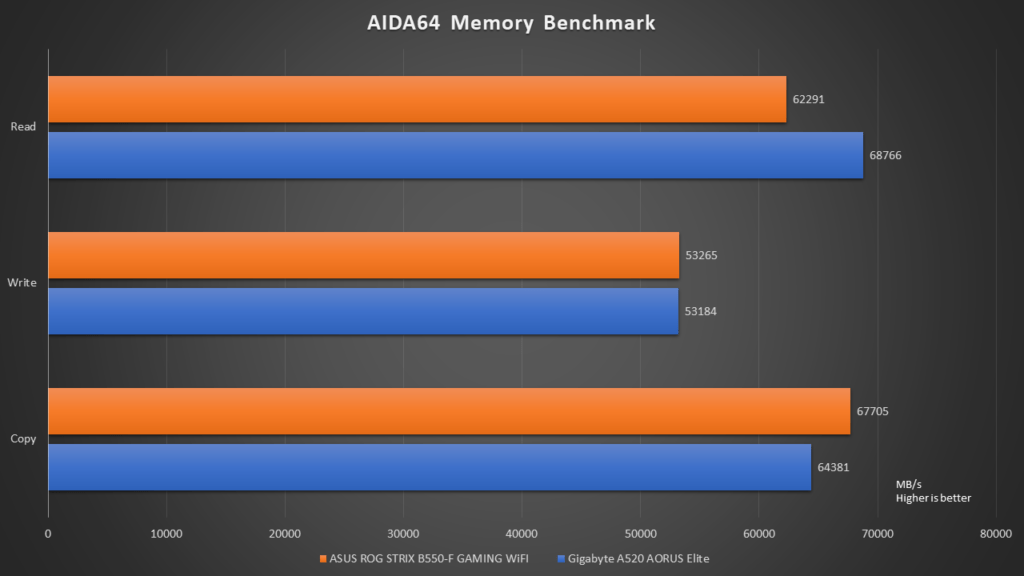 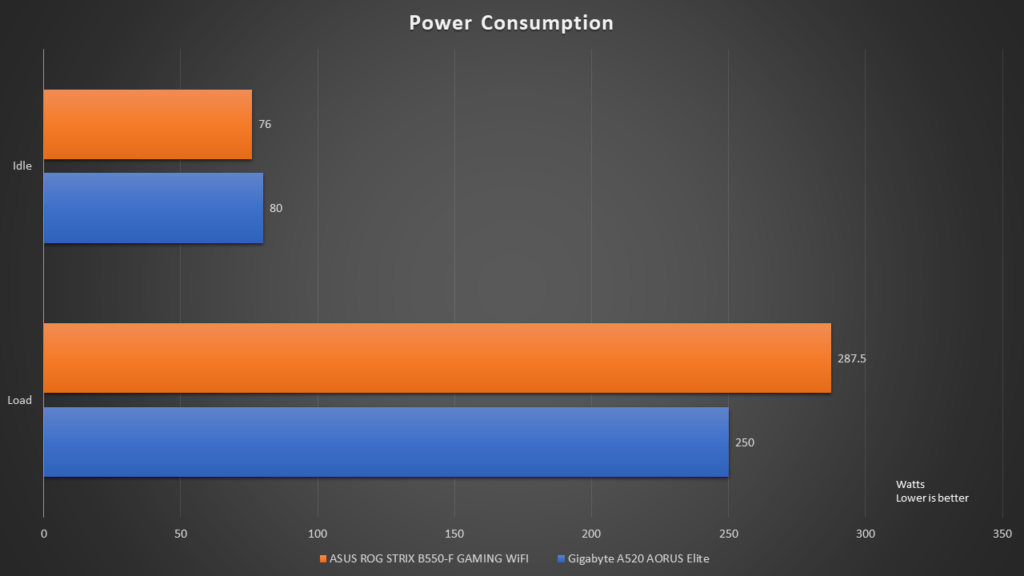 The ASUS ROG STRIX B550-F GAMING (Wi-Fi) motherboard comes with all the feature that we will need for a new gaming PC. It is specially designed with the gamers in mind, and has the capabilities to provide a great gaming experience, more than what typical motherboards offer.

You can know that you will be in good hands with the ASUS ROG STRIX B550-F GAMING (Wi-Fi) motherboard. Its rich gaming features, cool design and connectivity and expansion options are what makes this product stand out from competition. Certainly, it is a product to consider if you are looking to build a new gaming PC.

Own your workday with the Latitude 7320 Detachable