What comes to your mind when you think of a desktop computer? Usually, the image of a large box next to a monitor screen comes to mind. Many of the times, because desktop computers are bulky and takes up quite a bit of space, consumers would rather just purchase a laptop and connect it to the monitor instead.

Intel’s NUC Small Form Factor Mini PCs changed the way of how people define a desktop computer. These mini computers aim to fit high performance into a small computing unit, capable of your daily tasks. However, they are known to be notoriously expensive. Most of the times, they are out of the reach of those on a tight budget. Other PC manufacturers then came out with their own versions of the Mini PC. One of the most popular series, the GIGABYTE BRIX, also brings about the same value as the Intel NUC to the market.

Mini PCs are used more than just for daily compute. They are also used in industrial and enterprise applications, such as used as a controller device for unattended kiosks, vending machines, point of sales systems, etc. The GIGABYTE BRIX is usually designed as an all-rounder, capable of all these applications. There are also different models available for different use cases. Today, we are going to take a look at the GIGABYTE BRIX S, which is an Ultra Compact PC that has just been refreshed with the latest Intel 10th Generation Core processors for great performance and efficiency. 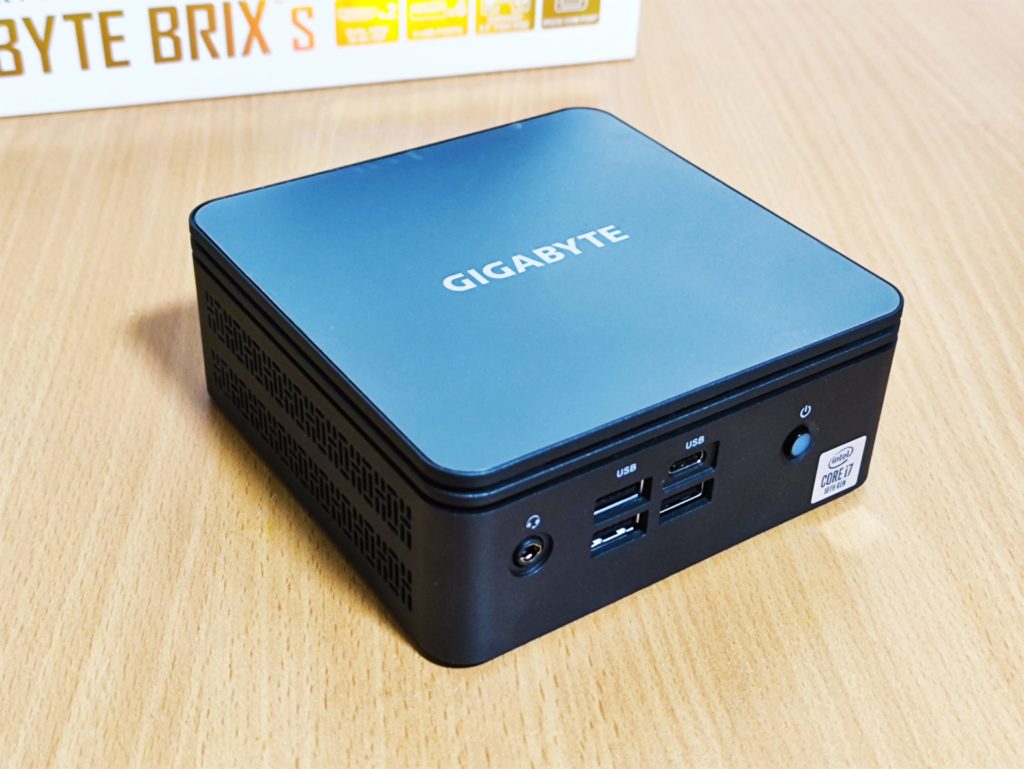 It’s not easy to create a Mini PC. As all its hardware are densely packed into a tiny little box, it must be well designed to properly dissipate heat away from the core components. Often times, manufacturers have to make a trade-off between physical size of the machine and its performance, as its thermal dissipation capabilities simply cannot keep up with the heat it produces. As for the GIGABYTE BRIX S, it tries to strike a balance.

The GIGABYTE BRIX S is equipped with a Intel U-series processor, which is Intel’s most energy efficient processor out of the whole Intel Core lineup. These processors are usually found in thin and light notebooks and 2-in-1s. Specifically for our review unit, the GIGABYTE BRIX S comes with an 10th Generation Intel Core i7-10710U Processor, which is only rated at a TDP of 15W. This means that the CPU is not going to produce a lot of heat in the first place, ensuring efficiency when it comes to computation.

Do take note that this is a barebone unit, and you will have to add your own SO-DIMM DDR4 RAM and storage drive. Both 2.5″ drives and M.2 (2280) PCIe drives are supported.

There isn’t a lot to work with on the GIGABYTE BRIX S’s UEFI BIOS system. It’s very similar to any other notebook computers, as the system is more or less tied down to factory settings. Only simple settings can be changed, such as boot options priority, enable/disable peripherals, components and features. There is no way for you to further push more performance out of this mini pc, as overclocking is disabled by default, and there are no options for the user to do any kind of overclocking.

We’ve added the Samsung 2 x 8GB 3200MHz SODIMM DDR4 memory and Western Digital WD Black SN750 2TB SSD into the GIGABYTE BRIX S Mini Computer. Do take note that as the chipset only supports a maximum of 2400MHz on the memory, our rated 3200MHz DDR4 DRAM only runs at 2400MHz.

We’ve decided to compare the GIGABYTE BRIX S to notebooks of similar specifications, such as the Dell XPS 13 2-in-1 7390 and the ASUS ExpertBook B9450 FA. Details of their specifications are in the respective links. 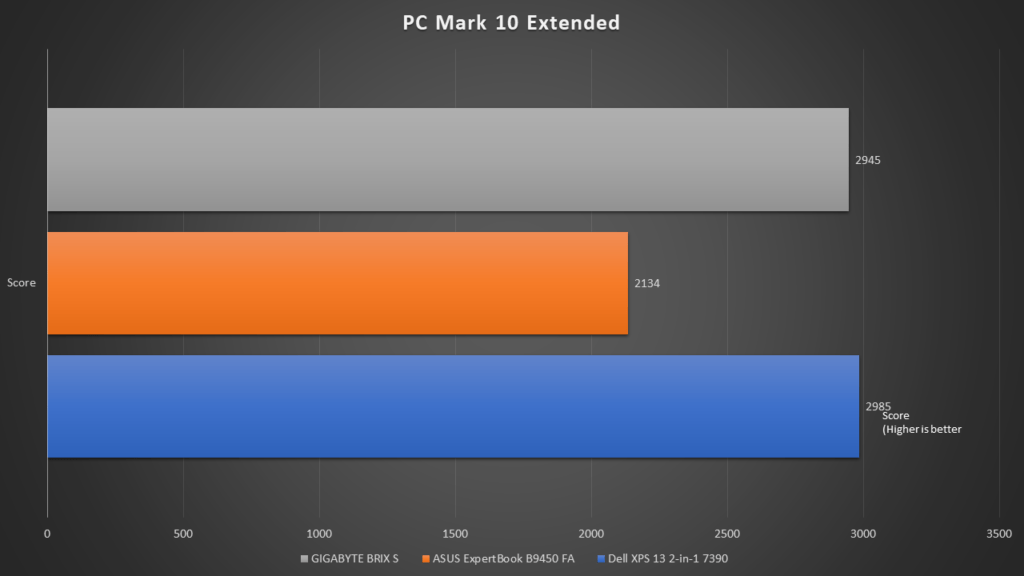 Despite having a higher core count, the GIGABYTE BRIX S falls slightly behind the Dell XPS 13 2-in-1 system. This is likely because the Dell XPS 13 is equipped with Intel’s Iris G7 graphics, which performs better than both the other two products in comparison. As PC Mark compares all the different components of the system, graphics performance is also one one of the factors contributing to the overall score. The GIGABYTE BRIX S only has Intel UHD graphics, and it is no wonder it loses out in this test. 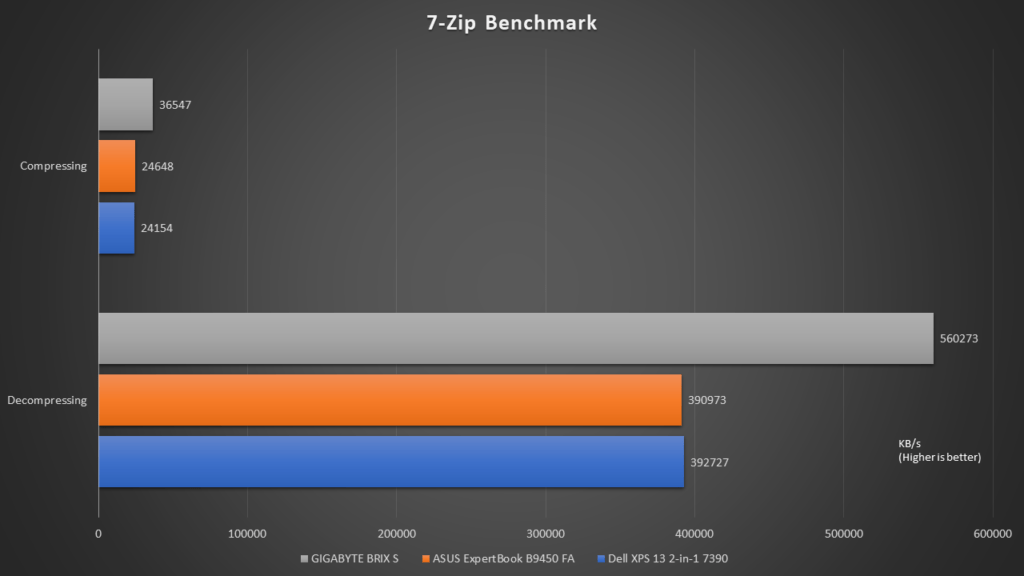 Based on the 7-zip test, which scales well with the number of cores and threads of a system, the GIGABYTE BRIX S excels. 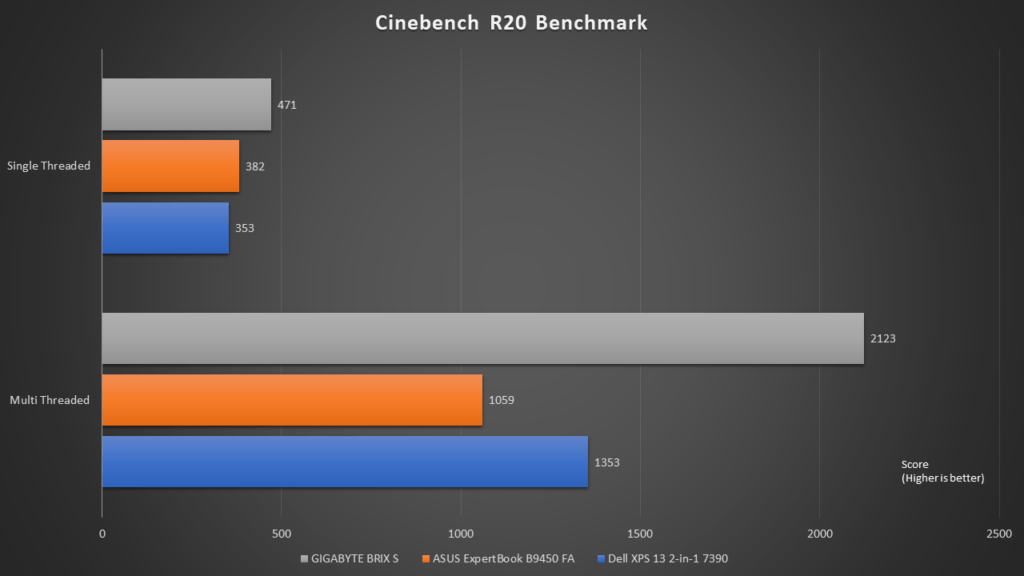 Interestingly, the single threaded performance of the GIGABYTE BRIX S is also much higher than that of the two other competing systems. It could be because that the BRIX S is better ventilated, allowing it to reach a higher core clock over a period of time, resulting in an overall higher score. Of course, as the GIGABYTE BRIX S has a higher core count, it performs much better in the multi-threaded Cinebench R20 test. 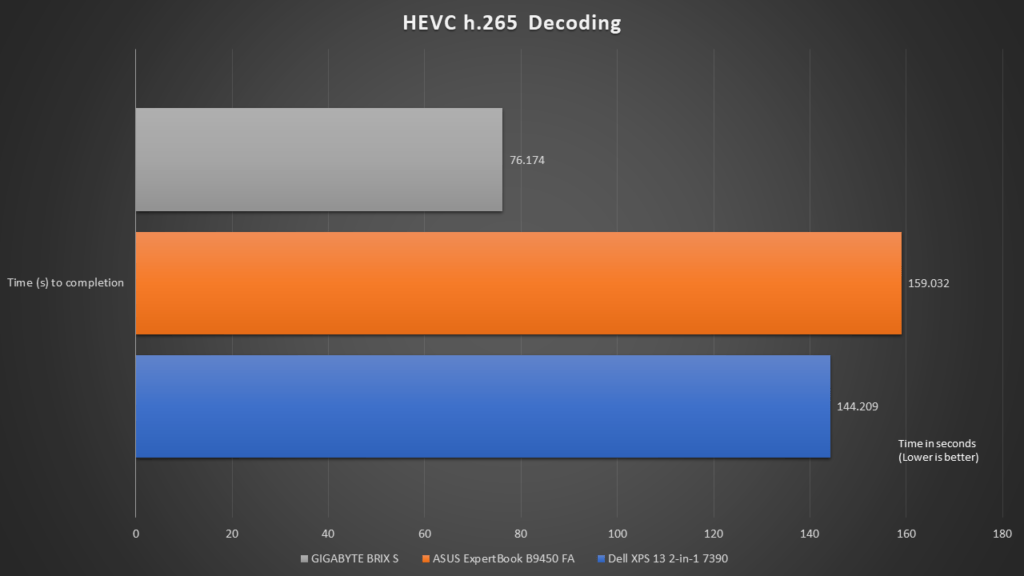 The GIGABYTE BRIX S also performs quite well in media decoding, completing the workload almost twice faster than the other two systems. 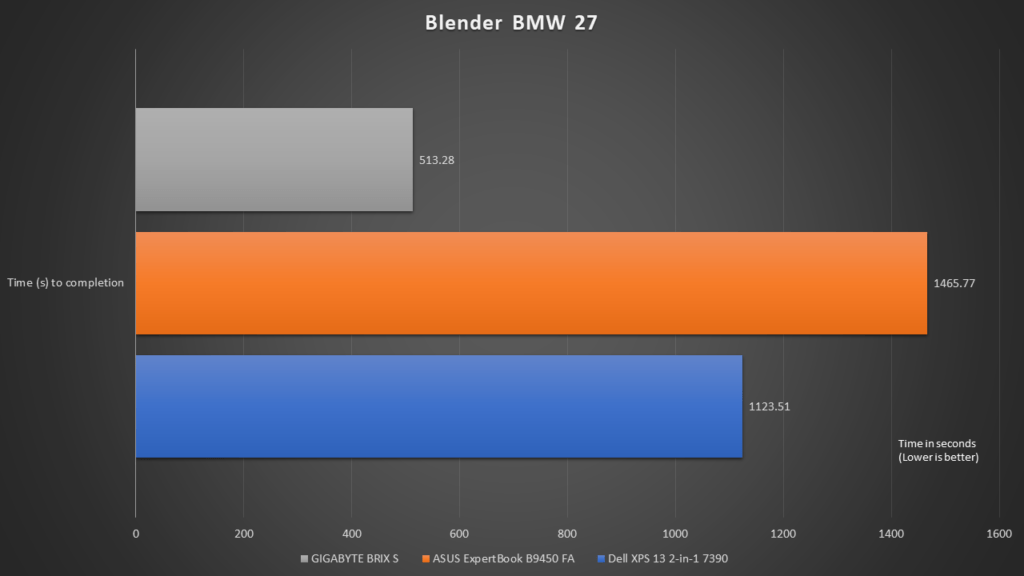 Similarly, the higher core and thread count on the GIGABYTE BRIX S also gives the system an advantage in the Blender BMW 27 test. It’s two times faster, despite all of the processors being Core i7 from the 10th Generation series. 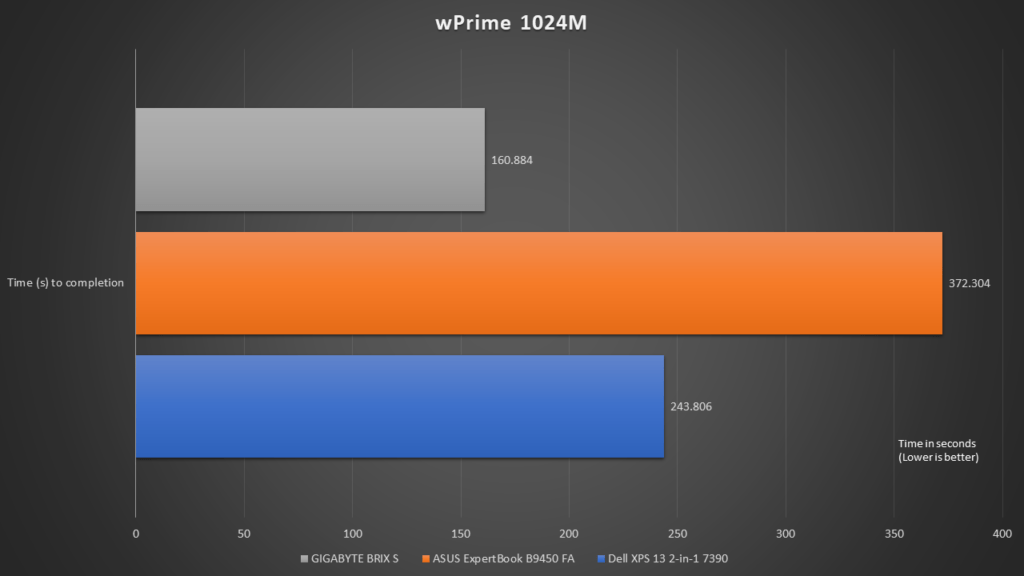 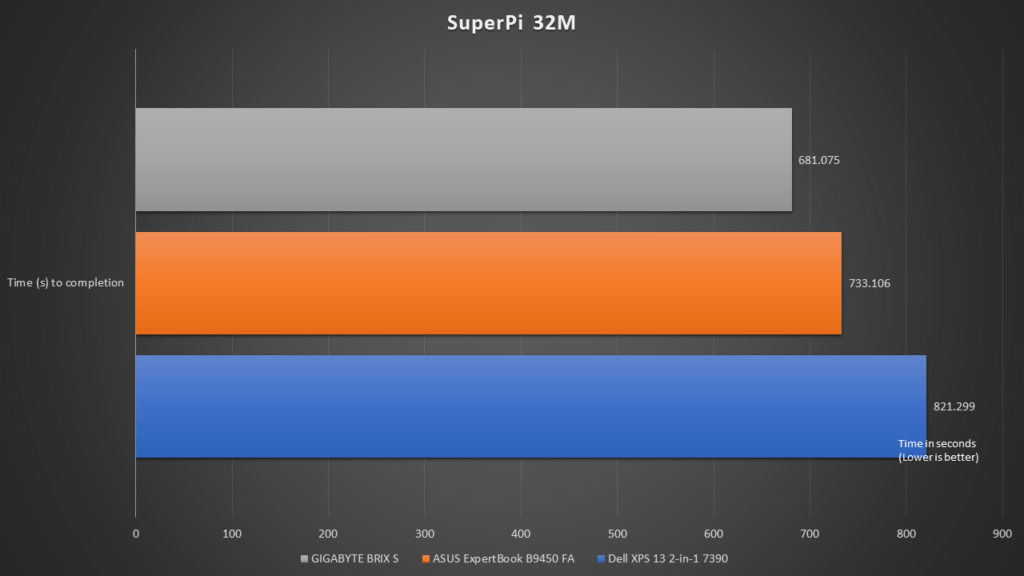 CPU performance for synthetic tests such as wPrime and SuperPi also highlights the performance prowess of the GIGABYTE BRIX S, as it came out on top. 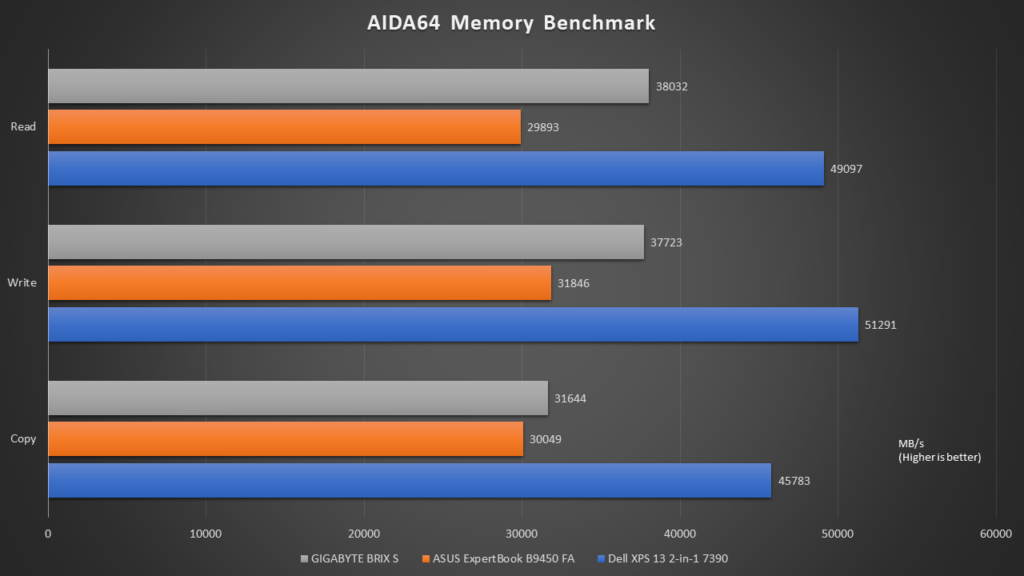 However, when it comes to the AIDA64 Memory Benchmark, we can see that the Dell XPS 13 had a much higher score. This is because it has its LPDDR4 memory running at 3733MHz. This is much higher than the 2400MHz DRAM speed found on the GIGABYTE BRIX S. Regardless, we can also see that perhaps memory performance does not affect the overall system performance too much, as the GIGABYTE BRIX S still had an edge over both the Dell XPS and ASUS ExpertBook in most of the tests.

Based on our tests, the GIGABYTE BRIX S CPU idled at temperature of 50°C. During a Intel Burn Test stress test, the temperature went up to 90°C. CPU frequencies were then dropped in order to keep the CPU cool and prevent any damage to the system.

As for power consumption, the system idled at about 40W. On the same Intel Burn Test load, it jumped to 55W.

We can also see where the GIGABYTE BRIX S falls into within the market. As consumers usually can’t get their hands on the Intel U-Series processors they can only approach brands such as GIGABYTE to get their fix of high-performance, high-efficiency Mini Computers.

If you are looking for a small form factor PC that can perform very well for your daily tasks, the GIGABYTE BRIX S is definitely one to consider. Being equipped with a hexa-core processor as opposed to the usual quad-core processor found in most notebook systems today, the GIGABYTE BRIX S has shown to outperform them in most of the applications. Of course, the improved performance also means higher productivity while working. You can simply achieve more at a shorter time frame.

We are also amazed at the efficiency of the GIGABYTE BRIX S. With its power consumption being maxed out at 55W, it has shown itself to be one of the lowest power consuming desktop computer in the market.

Of course, it all boils down to if you can appreciate the little space that such a mini computer takes up. If you are someone who wants a minimal setup, mini computers are the way to go. Of course, the GIGABYTE BRIX S will be one of the role models in this segment. It is an exemplar of what Mini PCs can achieve.