Tokyo – November 1, 2017 – Sony Corporation (Sony) is today
proud to announce “aibo,” the evolution of its autonomous entertainment robot
that brings fun and joy to the entire family. aibo can form an emotional bond
with members of the household while providing them with love, affection, and
the joy of nurturing and raising a companion. It possesses a natural curiosity,
and we hope it will bring joy into the everyday lives of our customers while
growing alongside them as a partner. 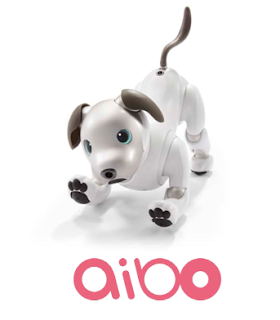 As the latest iteration of the beloved robotic companion,
aibo features an adorable appearance, vibrant movements, and a responsiveness
that is sure to delight. It will also develop its own unique personality
through everyday interactions as it grows closer and closer to its owners.

Its cute, rounded appearance makes you want to reach out
and pet it, while its seamless design is captivating and brimming with
life.
aibo shows its love for its owners through lifelike
expressions and a dynamic array of movements. Its body language is expressed
through a combination of eye, ear, and tail movements as well as different
voice sounds. This lovable behavior brings warmth and delight to the everyday
lives of its owners.
In order to bring aibo to life and allow it to express its
emotions, Sony developed ultracompact 1- and 2-axis actuators. These give
aibo’s compact body the freedom to move along a total of 22 axes and make its
smooth, natural movements possible. Furthermore, its eyes utilize two OLEDs to
allow for diverse, nuanced expressions.

2. The Ability to Bond with its Owners,
Leading to Constant Fun and Discovery.
Not content with merely waiting around to be called,
curious little aibo will actively seek out its owners. What’s more, aibo can
detect words of praise, smiles, head and back scratches, petting, and more,
allowing it to learn and remember what actions make its owners happy. Slowly
but surely, aibo will also become more aware of its environment, and as it
gains confidence it will learn to walk around an increasingly wider area and
respond to situations accordingly.
This adaptable behavior is made possible through Sony’s
well-cultivated deep learning technology, in the form of inbuilt sensors that
can detect and analyze sounds and images. aibo also comes with fish-eye cameras
that utilize simultaneous location and mapping (SLAM) technology, allowing it to
lead its life in close conjunction with its owners.

3. Changes Over Time, Maturing and Growing into a
One-of-a-kind Companion

As it interacts with people over time, aibo’s behavior
slowly changes and adapts in response to its unique environment. It eventually
becomes able to respond to its owners’ affection in kind, and when it feels
loved, it will display even more love and affection in return, nurturing a bond
that only deepens as time goes on.
These perpetual changes are brought about through Sony’s
unique AI technology, which allows aibo to interface with the cloud. aibo’s AI
learns from interactions with its owners and develops a unique personality over
time. Further, with its owners’ permission, aibo can collect data from these
interactions, then connect to the cloud and access the knowledge accumulated
from interactions between different owners and their aibo to become even more
clever. 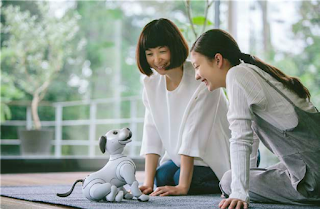 We at Sony hope that our customers will develop precious
and deeply personal bonds with their aibo and create cherished stories that
will last a lifetime.

“My aibo” is an app designed to help owners enjoy life with
their aibo by providing support and convenience. In addition to accessing
system settings and owner information, other features include “aibo Photos,”
which lets users view any pictures taken, a feature to “Play” with a virtual
aibo inside the app, and the “aibo Store,” where users can add additional
Tricks to their aibo. Some of these features are also accessible to users who
do not own an aibo.

1: “My aibo” can be
downloaded from Google Play and the App Store. A web browser version is also
available at http://aibo.com.
2: aibo and “aibo basic plan”
subscription required to fully enjoy all features of “My aibo.”

An aibo Basic Plan subscription is necessary to utilize
aibo. By subscribing to the aibo Basic Plan, you can use a Wi-Fi connection at
home or a mobile connection on the go to enjoy the full arrange of aibo
features. These include aibo being able to access information stored in the
cloud to grow and learn as well as the “My aibo” app (aibo Photos, aibo Store).
Additionally, your aibo’s data will periodically be backed up in the cloud. A
planned future service will allow owners to restore this backed up data onto a
new aibo even in the event of an accident resulting in irreparable damage.

Sony is also providing aibo Support Care, which offers
discounts on repair fees in the event of damage or malfunctions. Subscription
to this service is optional.
・ 50% discount on repair fees
(incl. examination fees, part replacements, and exchanging of broken or
depleted components).
・ 50% discount on checkups
and inspections
*All above fees do not include shipping or taxes

l
aibo will be available for purchase exclusively
through the Sony Store, Sony’s direct retailer.
l
Pre-orders will be available starting from 11:01
P.M. on Wednesday, November 1, 2017 through the Sony Store website (http://aibo.com/en) (Some parts of website only accessible in
Japanese, pre-order numbers are limited).
l
More information about aibo will be made
available through http://aibo.com/en and Sony Store Online.
1: As of the time of this release, product launch is only
scheduled for Japan.
Product Details
Note:
Information is current as of the day of the announcement. Please note that
product and service details are subject to change without notice.
Please visit the product website http://aibo.com/en
for more details.

88 Percent of Java Apps Susceptible to Widespread Attacks from Known Security Defects, According to New Research from CA Veracode