Today, new images of the refreshed Xperia Z5, Xperia Z5+ has been leaked on social media. This has led to speculations that Sony will soon release another series of their flagship smartphone. The Xperia Z5+ was said to be announced together with 2 other of its variants which will be different in screen size. 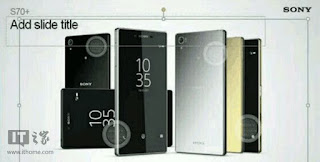 From the leaked image, the smartphone that will be released is codenamed S70+. Judging that Xperia Z5’s codename was S70, it is likely that the new flagship phones will be released as Xperia Z5+. It is also seen that the phone will have a simplistic standard sandwich design of Sony’s Xperia Z series. The the number of ports on the phone is put to a minimum, possibly ensuring that it remains waterproof certified like previous generations of Xperia Z smartphones.

The new smartphone will be available in Silver, Black and Gold colours.

There has not been a lot of news around the internet about the upcoming Sony Xperia Z5+, but it has been made certain that it will have a 5.5 inch screen size. Moreover, previous rumours also suggested that it will be equipped with a 4k resolution display. This means that the Xperia Z5+ will reach a high pixel density of over 800ppi. There have also been speculations that the smartphone will still be using Qualcomm’s 810 processor and not a newer 820 processor. This could deter consumers from getting the new device as an upgrade is deemed as not significant.

Ultimately, all these rumours and questions on the Sony Xperia Z5+ will be answered during the Sony launch event that will be held in early September this year.