Greek based tech site TechCommunity said that HTC is currently testing an enhanced version of the HTC One. To prove their claims, a screenshot showing the specifications of the upgraded smartphone is released. It shows that the new HTC One will be equipped with 3GB memory and a Octa-core processor. It should be Samsung’s Exynos 5 Octa processor which is found in Samsung’s Galaxy Note 3, namely the 5420.

Meanwhile, TechCommunity also revealed that this upgraded version will also introduce new technologies such as “Clear Audio” which improves call quality. Additionally, the phone will also support more network types and standards, covering almost all the world’s networks. However, the camera remains the same at 4 Megapixel with its UltraPixel technology. The new smartphone will also have a upgrade its display glass to the third generation Gorilla Glass to reduce its overall weight. The new smartphone will be preinstalled with Android 4.4 KitKat. 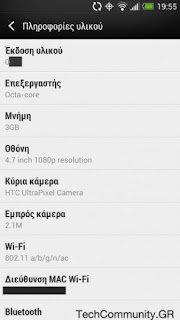 There has always been minimal cooperation between Samsung and HTC, previously only limited to the use of Samsung displays on HTC smartphones. The use of Samsung smartphones on HTC products seemed unlikely. However, there have been rumours that HTC is already working on their next generation flagship smartphone “M8” which is slated to be launched in 2014. We are unsure if the news from TechCommunity is referring to the flagship smartphone or just an upgraded version of the HTC One.