The month of September is getting more exciting and manufacturers are releasing their latest phones into the market for the year. Today, OPPO released their new N1 smartphone and new Color OS that goes right into the new N1. The phone is sold at 3498 yuan (700SGD) and will be available on in the market from October onwards. 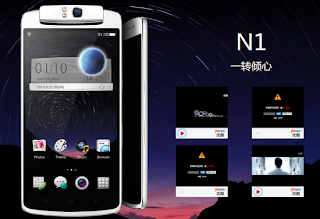 The N1 is an Android based smartphone that comes with a 5.9 inch 1080p display. It is powered by Qualcomm’s Snapdragon 800 processor which is also found on majority of the flagship smartphones on the market which are just released. Also, the back part of the smartphone is also touch sensitive. The feature is called O-Touch and depending on the gesture that you make, the phone is can either play next song, browse the web or do a custom action. For example you can long touch the back of the phone while the camera app is on and it’ll take a shot with the front facing camera. The supported gestures are long press, sliding and double tapping.

One of the core selling points of the OPPO N1 is probably its camera. The N1 is equipped with a 13 Megapixel camera with CMOS sensor and f/2.0 aperture. Oppo’s specially-designed the camera unit in partnership with Fujitsu IPS imaging chip. Oppo dubs the N1 as the first Android smartphone to feature 6 piece lens design. The whole camera module rotates 206 degrees allowing it to act as a front-facing camera as well.

OPPO officially stated that there are already 243 developers and 20,000 beta users who have used the new Color OS. The new OS already has 43 patents.

China to lift ban on Facebook, Twitter and other banned websites - but only within Shanghai free-trade zone