Recently, further information on Android 4.3 Jelly bean has come to the light. The information originally came from a leaked Nexus 4 updated Android 4.3 OS which gave the idea that the update from Android 4.2 to 4.3 will be minimal. 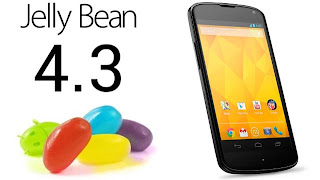 However, to kill the cat, here are the recently leaked features of Android 4.3 :


Open GL For Embedded Systems Version 3.0 –Basically what this means is that the graphical ‘Wow’ factor of games and applications alike will go up by a few notches. Games and Apps on the Android 4.3 Jelly Bean will be able to utilize more effects and process them more efficiently on their mobile architecture, paving Android to become a viable portable gaming system.

Bluetooth Low Energy – According to the leak, this is a confirmed feature in Android 4.3 Jelly Bean. The update improves the usage of bluetooth technology on the phone. It utilizes a very efficient system for Bluetooth Data conventions, effectively increasing your devices ability to endure long instances of data transfer over Bluetooth. This means more usage and less battery life used up in the process.

Wi-Fi Update – The new Android 4.3 Jelly Bean system will allow apps to automatically trigger the Wifi On and Off after you have granted it permission. This will mean less pestering and more peace of mind for apps which toggles the Wifi to get a lock on your location.

T-9 Prediction – Supposedly Android willnow be able to predict the numbers you are about to dial using the T9 or the dial pad, making it an intuitively easier to call people.

Rumored Efficient Ram Usage – There are leaks and also rumors on this feature. 4.3 Jelly Bean will be able to utilize RAM more effectively, meaning that your Android device will lag less and play apps better.

You can read about Android 4.3 features in detail, here from WCCFTech