In order to compete and defeat Apple in the smartphone market, Samsung has strategized and increased their spending on advertisement significantly. This increase is unprecedented in the Advertising space in US.

According to Ad Age, Samsung has spent around 881 million USD in advertisement last year in US. This is an increase of 58% of advertising money spent from previous year. A huge percentage of these advertisement costs are for the Galaxy devices. 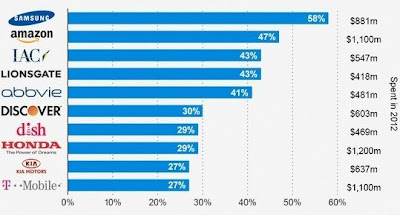 In US’s 100 largest advertisers, it has been seen that advertising costs to the companies has increased by an average of 2.8% to 104.5 billion USD. The highest growth rate is seen in Samsung. Apple’s advertising expenditures amount to approximately 1 billion USD.

Samsung’s US advertising spending accounts to one-fifth of the company’s global advertising expenditure.

In order to expand Kindle line of products and branding, Amazon’s advertising expenditure has also increased by 46.6%, spending around 1.1 Billion USD. In the internet company space, this amount is only second to Google who spent more than 2 Billion USD in 2011.

Procter & Gamble is the largest advertiser, spending 4.8 billion USD last year and 4.9 billion in the previous year. General Motors was ranked second last year at 3 billion. Following on, Comcast at 2.98 billion, AT&T at 2.91 billion and Verizon at 2.38 billion. These companies are the top five advertisers in the United States.