Galaxy S4 to be released on the 22nd April? Images leaked

Home » Galaxy S4 to be released on the 22nd April? Images leaked

Back a few weeks ago, there have been speculations that the next generation Samsung Galaxy device will not come with a Home button. However, it was seen almost impossible for Samsung to remove their iconic Home button from their device and the leaked graphic images were considered counterfeit. 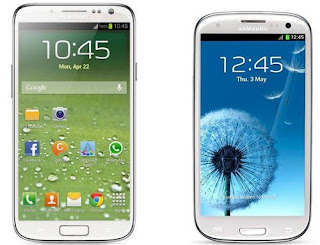 Now, a new Samsung Galaxy S4 graphic design image has surfaced. It seems like the new Galaxy S4 will have a even larger screen compared to the Galaxy S3, and with narrower borders.

Based on current news reports, the Samsung Galaxy S4 will be equipped with a 1.8GHz Samsung Exynos 5 Octa Core processor. Four of the cores, which will be powered by ARM’s Cortex-A15 architecture will be responsible for resource demanding processes, while the rest of the cores, based on Cortex-A7 architecture will focus on the less computational heavy processes, making the whole chip much power-efficient compared to processors of similar class. In addition, Galaxy S4 will also boast a 4.99inch 1080p display, 13 MegaPixel camera, 2GB RAM and support for microSD card expansion. It will also come with built in 4G LTE chip and will also support wireless charging. The S4 will come in the latest Android Operating System at the point of release.

The Samsung Galaxy S4 is also rumoured to be launched on April 22nd this year, on 10.45am (See image). Although these speculations have not been confirmed, these rumours seem to coincide with previous news that the S4 will be launched in April.