Intel will be releasing their next generation Ivy Bridge-E/EP processors in the 2nd half of the year. These chips will be based on the current Sandy Bridge-E/EP architecture with a die shrink, reducing power consumption significantly. 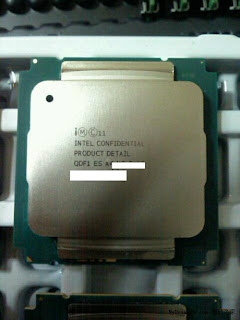 It is reported that the desktop version of Ivy Bridge-E will still come with a 6-core 12 threads design, while the server chips will be raised to 12 core 24 threads design. Specifically, they should arrive in the market in October to November period. Although there may be still a 10 more months before the official release, engineering samples have already surfaced on eBay, for sale at 250USD.

The seller claims that the processor will still be compatible with current LGA2011 motherboards. However, we are uncertain if the chip is a Ivy Bridge-EP or a Haswell-EP chip.

The processor number has been blurred and only the Intel Q-Spec code of QDF1 can bee seen. The seller explains that the chip can be installed on a X79 motherboard, but it ill not boot, probably because of a BIOS incompatibility.

Since the chip has yet to be operational on any motherboard, more specific specifications of the processor has yet to be leaked. The online bids have reached 255USD and is expected to increase significantly.

Galaxy S4 to be released on the 22nd April? Images leaked