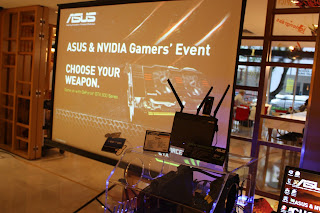 NVIDIA Singapore’s representative, Ngee Seng started off the event by introducing the company and talking about the general trends in the PC gaming industry, as well as touching on their latest technologies from NVIDIA, i.e. Geforce Experience drivers. Hugo, from NVIDIA Taiwan Office then shared various NVIDIA technologies in depth. Some technologies include their famous Phys and TXAA. NVIDIA also claims that their flagship single core graphics card is 4x faster than competition’s,because of the availability of 8 as compared to 2 Tessellation compute units.

ASUS Singapore’s Representative, Jia Kang then presented on ASUS’s own graphics cooling technology available on their NVIDIA offering. Branded DirectCu, the technology allows a direct Copper(Cu) block to be interfaced to the GPU Core, efficiently dissipating heat away and cooling it. DirectCu comes in 3 versions, DirectCu Silent(Passively cooled thermal solution), DirectCu(Single Fan) and DirectCu II( Dual Fan). After his presentation, ASUS then shared their GPU Tweak utility for tweaking and overclocking of different Graphics Card.

Gamers also had the opportunity to interact with the respective representatives from the two companies to give their feedback on their products. Gaming systems were also set up for the gamers to try different games with NVIDIA’s technologies.

Of course, a successful event cannot do without lucky draw. There was quite a number of gamer gears up for grab, ranging from Gaming Mouse Pad to a OCZ Vector SSD worth SGD399.
The event was a success with gamers walking home with lucky draw prizes and a filled stomach. It was heartening to see the vendors willing to listen to their customer’s feedback and implementing better and improved changes to their products. Clearly, ASUS and NVIDIA are companies who are ahead of others in good communication and working relationship with their customers. We look forward to the next event from both brands, and hope to know more about the improvements they will bring to their products in the future.