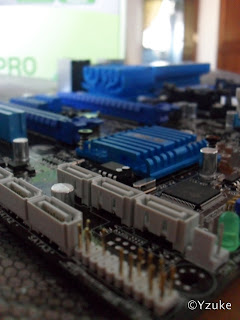 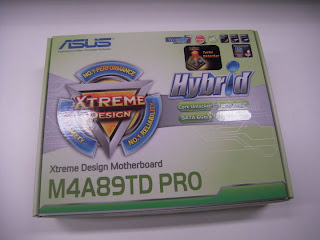 This motherboard features the new AMD 890fx and SB850 chipset. Yes. This means that SATA 6Gbps is finally native on the chipset itself, overcoming possible bottlenecks that were once a problem on the P55 chipset. 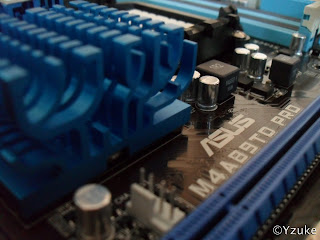 Based on ASUS naming system, I’ll have to emphasize that this is ASUS M4A89TD model and not M4A89GTD model. There is a significant different between these 2 models, with M4A89TD equipped with enthusiast based 890fx chipset while M4A89GTD is on the mainstream 890gx chipset.  I had always thought that Asus sent me a GTD model until I saw on the motherboard box that this motherboard is with a 890fx chipset, then I realised that it was a higher end model of motherboard that I am reviewing. Anyway, here are some of the features that Asus M4A89TD has. 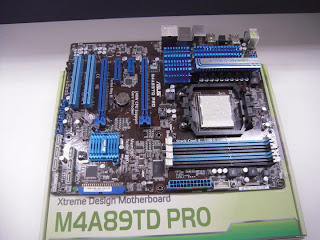 890fx Chipset supports all AM3 processors including Phenom II and Athlon II, including the new 6 core AMD Phenom II x6(This motherboard has support for it. the thuban core CPUs) It supports up to CPU TDP of 140W. That means all the AM3 AMD processors out there are supported. 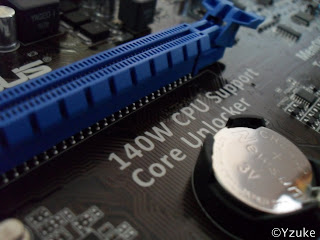 Allow me to introduce you the TurboV EVO processor that is indeed a unique feature compared to the other vendors out there in the market. TurboV processor is exclusive to Asus and is a innovation by them. 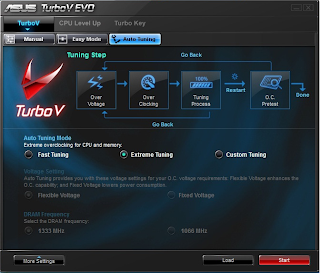 “TurboV EVO processor is a highly specialized micro-processor on the motherboard that makes
overclocking easier and more rewarding. Together with ASUS’s unique Auto Tuning option inside TurboV EVO application and OC Tune option in BIOS as the trigger to this processor, it intelligently tunes the system to a high performance yet stable state based on the potential of the components installed. Unlike other vendor solutions of using limited preset profiles, this intelligent processor is capable of fine-tuning the system performance with extreme flexibility. Users can choose to make a start, and leave the rest for the TurboV EVO processor to complete, or the other way around, all up to the well of users, without the need to change mode or save settings.”
The inclusion of Turbo V processor, a controller onboard M4A89TD gives the motherboard a number of premium features such as core unlocker, turbo key tool, which allows this motherboard to stand out from competitors. Introduction of each various features will be done in the next section. 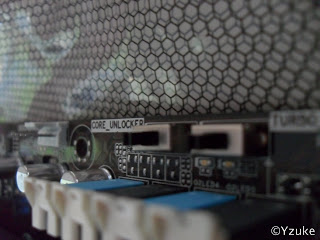 Firstly, I believe that many people are aware that AMD processors are able to unlock extra cores to boost the whole system performance. This feature was enabled with AMD’s ACC(Advanced Calibration Clock) feature on the SB710 and SB750 chipset. However, not many know that ACC feature was actually left out in the newer generations of chipsets from AMD, namely SB850. This have led to motherboard manufacturers like Asus to look out for other alternatives to ensure that cores from AMD CPUs do unlock as well from the newer boards. Asus have always been an innovating company. In fact, there are a higher number of researchers working in Asus compared to the number of people actually doing sales work, technical production and so on. Core Unlocker is a brainchild of Asus. Asus was the first to implement such features to replace ACC. Other motherboard manufacturers simply copied it off. Of course, I am certain that you will get the best unlocking experience from the Asus Core unlocker feature and ensure that your system is stable and running as it should be with multiple cores unlocked.
Unlocking is just as simple as pushing a a switch to enable the TurboV controller on board and the controller will scan for all hidden cores and caches, and unlock only the working ones for the user. 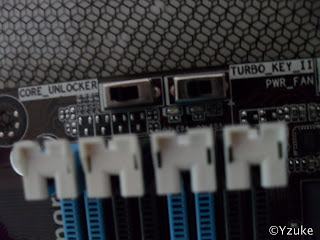 Similar to other motherboard that Asus manufactured, the Turbo Key tool allows automatic overclocking of the CPU to the highest possible frequency with a certain voltage determined by TurboV controller itself. Switching the feature on is similar to switching core unlocker on: with a switch on board.Honestly speaking, I find that the Turbo Key Tool not only allows you to automatically overclock your processor, but at the same time, Novice manual overclockers can use the clocks and voltages provided by the turbo key tool as a reference for a higher clock done manually for the system. It is reliable to use it as reference because Asus ensures that the system is still stable after switching turbo key tool on. 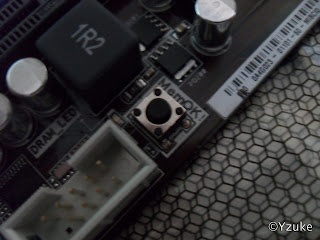 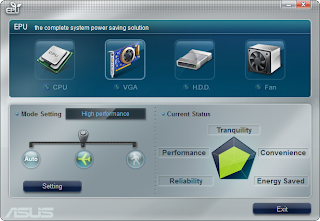 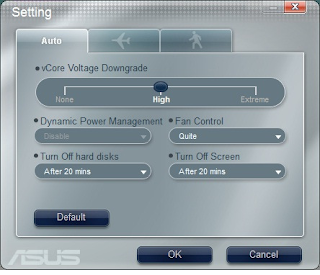 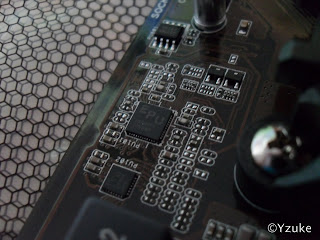 The EPU aims to save electricity by providing stable and clean current flowing through the whole system, and at the same time providing stability to the system. It is an energy saving feature. It also ensures a higher power efficiency. 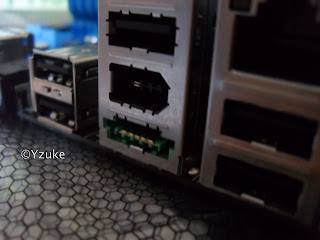 At the back IO ports, there is a eSATA USB2.0 combo. eSATA transfers data 8 times faster than the conventional USB2.0. However, SATA does not bring power(electricity) to power up devices such as external hard drives and thumb drives. eSATA drives requires you to plug an extra USB to power the device and then additionally a eSATA cable to do the data transfer. With the Power eSATA support, your external device will be able to power up even without the extra USB cable because power is already delivered to it since the port is also a USB port as well. It certainly reduces hassle because all you need to do now is just plugging in the device and enjoy seamless transfer rates at 3Gbps. 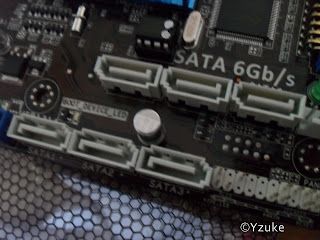 Yes! You’ve got yourself futureproof with Native SATA 6Gbps. With new solid state drives using the new SATA6Gbps because their performance are surpassing the 3Gbps, thus bottlenecking the SATA 2.0 interface there is a need for an improvement in the SATA standard. SATA 6Gbps was introduced not long ago and the implementation of SATA 6Gbps to AMD SB850 will prevent bottlenecking. With transfer rates of up to 750MB/s theoretically, you can transfer a 4GB movie in less than 6 seconds! 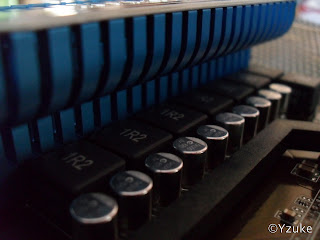 beefy  heatsink at the VRM area

1.Q-Shield(Asus’s backplate)
Firstly, the IO shield is black, greatly improving the aesthetic appeals of the whole system looking from the back. Other than that, Q-shield cancels out Electromagnetic interference. It being padded also reduces vibrations and ensures that your system does not have that extra vibration noise commonly caused by backplates. 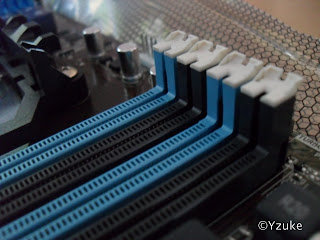 This is actually the first time I’ve seen such a feature in motherboard. Normally, there will be 2 clips to hold each of your RAM dimm. Asus removed one of them because they saw that it is difficult to reach the clip especially with long graphics card like 5870,5890 and GTX480 which is blocking the clips. Now, all you need is to open on clip and pull your whole dimm out. As easy as that, instead of remove your whole graphics card just to get that RAM out. 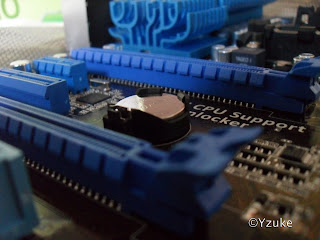 In order to reduce the difficulty of removing large VGA cards from PCI Express slots, while still being able to secure the card in place when been installed, Asus has developed the Universal PCI express slot with auto-lock and easy unlock capability. With the presence of Q-Slot, removing multiple large graphic cards no longer cause headaches no matter how big the cards are. 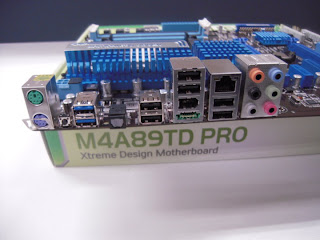 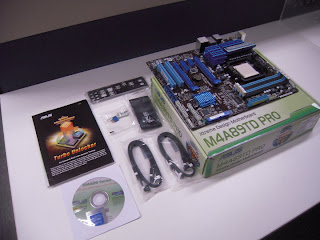 Switching on Turbo V II key on the system, there was an increase of 272MHz overclock on the Phenom II 965(C3). 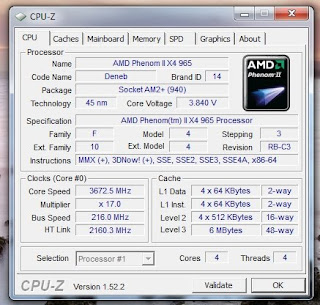 Overclocking your CPU is that easy! 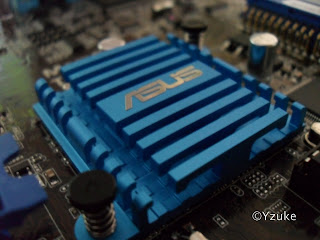 I have done a simple benchmark to show the improvements of the RAID 0 performances on my Solid State Drives comparing SB750 and SB850. Although improvements are not significant, with sata 6Gbps there will be great improvements once they become mainstream. Crystal Disk Mark and HDTune.Here are the results. 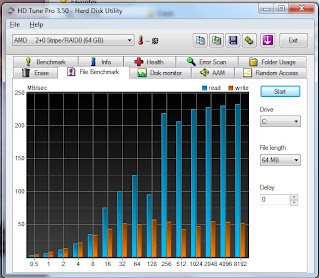 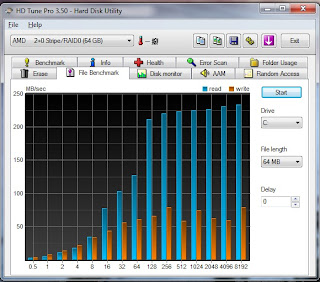 HD Tune Pro had shown that there was quite an improvement on SB850. On 512k read for SB750, there was a significant drop in the readings while for SB850, the graph remained high. 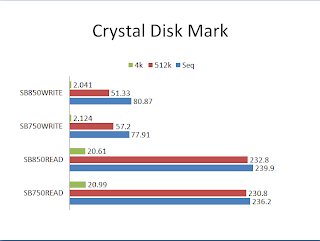 With a flip of the core unlocker switch, I was able to unlock AMD Athlon II X4 620 with an L3 cache. An original 620 didn’t have L3 Cache. 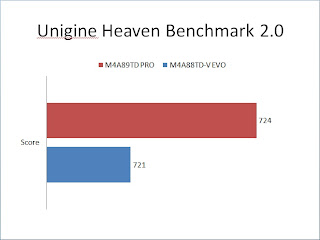 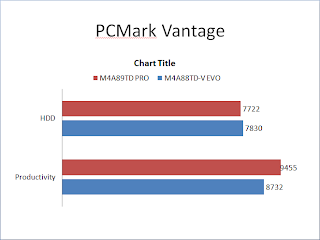 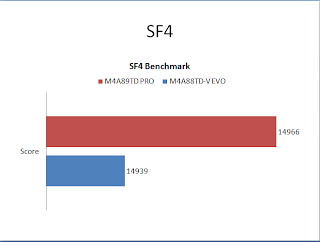 Overall, I will give the board a 3.5/5.0
I love the board because it uses the amd 890fx chipset, and with the great 890fx, an enthusiast platform can be built easily. However, the price is just not that right. I would have spent 50 dollar more just to get the Asus Crosshair IV formula, a better board from a even more premium series of motherboard from asus, Republic of Gamers Series which support quad crossfire. However, I will recommend this board to someone who intends to run a 5970 quad crossfire because the availability of only 2 pci-e x16. Another noticeable downside to this board is the arrangements of the expansion slots. It will be preferred to place the pci-e x1 as the first, instead of the second. This way, putting a dual slot graphics card will not cover the pci-e x1, normally for the sound card. However, the presence of the pci-e x4 solved the problem.