With the launch of the new 12th Generation Intel Core Processors, the PC performance junkies are starting to shift over to the new Z690 platform. Featuring only the latest in technology, such as the support for DDR5 memory and PCIe 5.0 standard, this new platform from Intel is geared towards bringing the best possible performance levels to PC applications and more. Now that we finally see the light with respect to the lack of corresponding components for the Z690 platform, it’s perhaps time to finally make that upgrade.

At the heart of every new desktop system is the system’s motherboard. It brings all the various PC components together, ensuring that they can run at their expected performance levels stably and reliably. ASUS, one of the most popular consumer motherboard manufacturer in the market, has released a slew of products in the market to cater for different targeted segment of users. Previously, we had a look at the gaming-focused ASUS ROG Maximus Z690 Hero motherboard, which is considered a high-end premium product from ASUS. Winding down a bit, the PRIME series of motherboard is targeted for those who are more budget conscious, but still want a feature-rich and reliable motherboard.

In this article, we are going to find out if the new ASUS PRIME Z690-A motherboard meets the mark in terms of features and performance as compared to its similar counterparts. 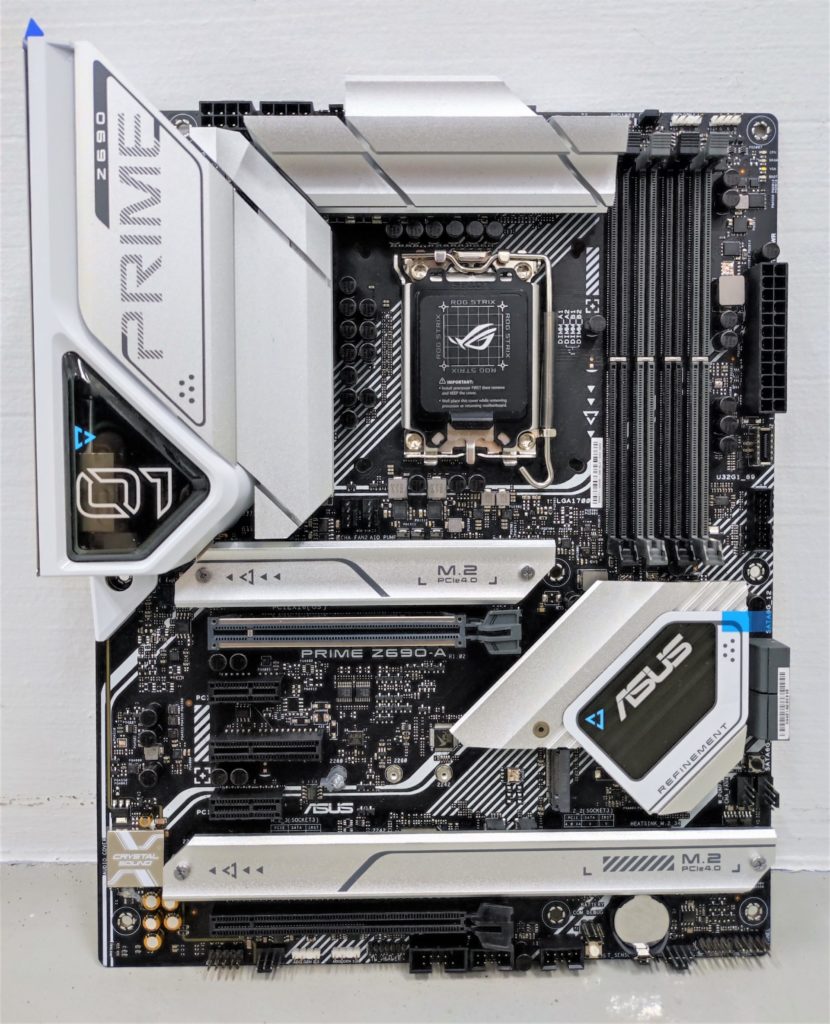 Ever since a few years ago, the PRIME series of motherboard from ASUS has always retained it usual look at design. It has a base black PCB which is then accented by white and metallic heatsinks. While they have tried to keep things simple, it’s subjective as to understand one’s preference over design style. Regardless, we’ve still got to say that the overall design still looks considerably decent. Regardless, when purchasing this series of motherboard, what we would rather focus on is its features and performance. 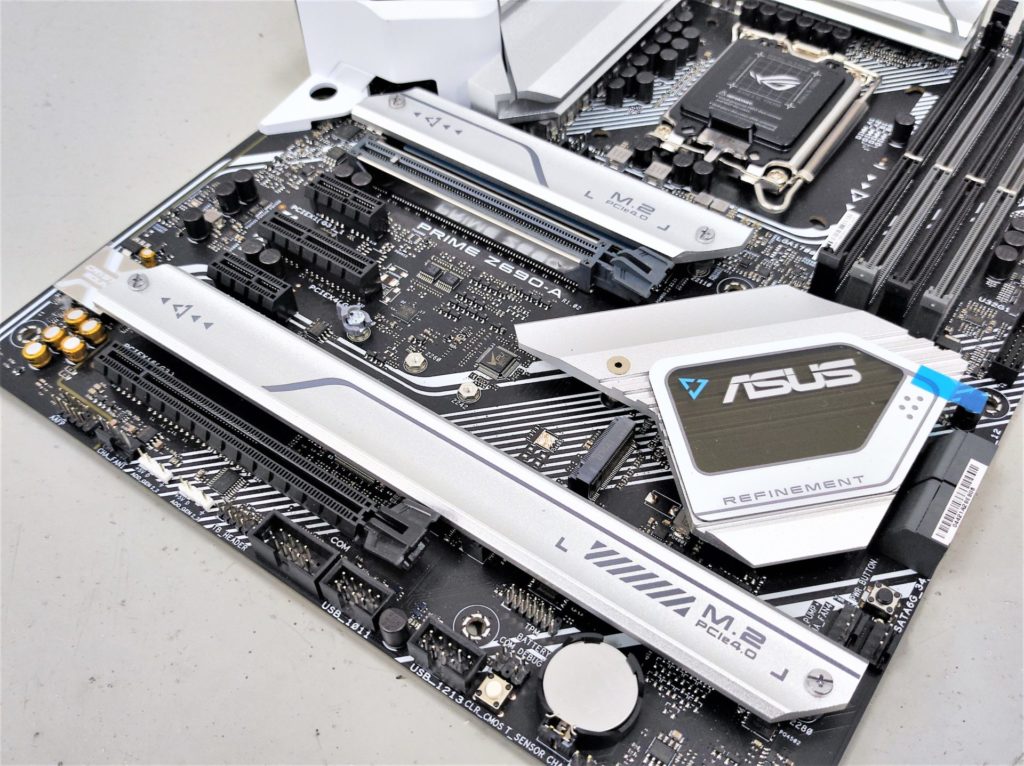 The motherboard has got heatsinks over key areas which needs them the most. At the south side of the motherboard, we spotted heatsinks covering 3 out of the 4 M.2 slots, as well as the chipset. 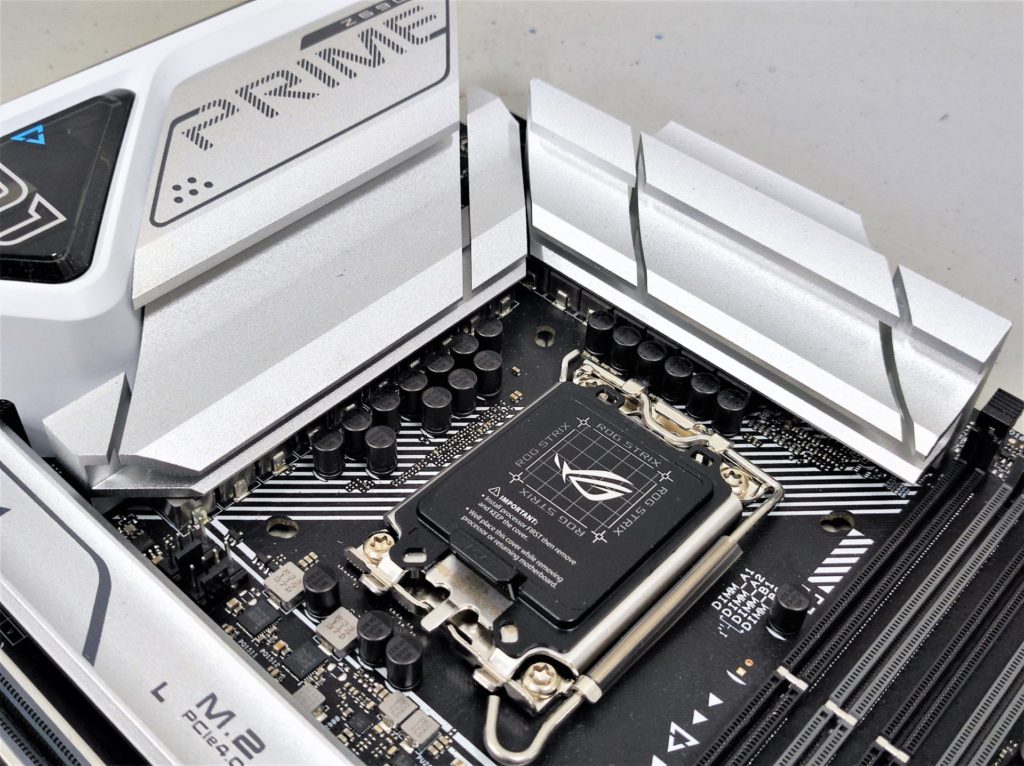 To properly cool the power delivery circuitry on the motherboard, a beefy two-part heatsink design is also adopted. This passively cools the 16+1 DrMOS setup to ensure that the motherboard can function adequately even with the top of the line Intel Core i9 12900K processor installed. ASUS also uses the Digi+ voltage regulator module to deliver digital and precise control over the circuitry’s stability. Digi+ enables quick reactive to voltage droop to prevent unintended system malfunction, or can even manage switching frequency for more responsive electrical response. It also have the capabilities to manage power-efficiency on the motherboard. 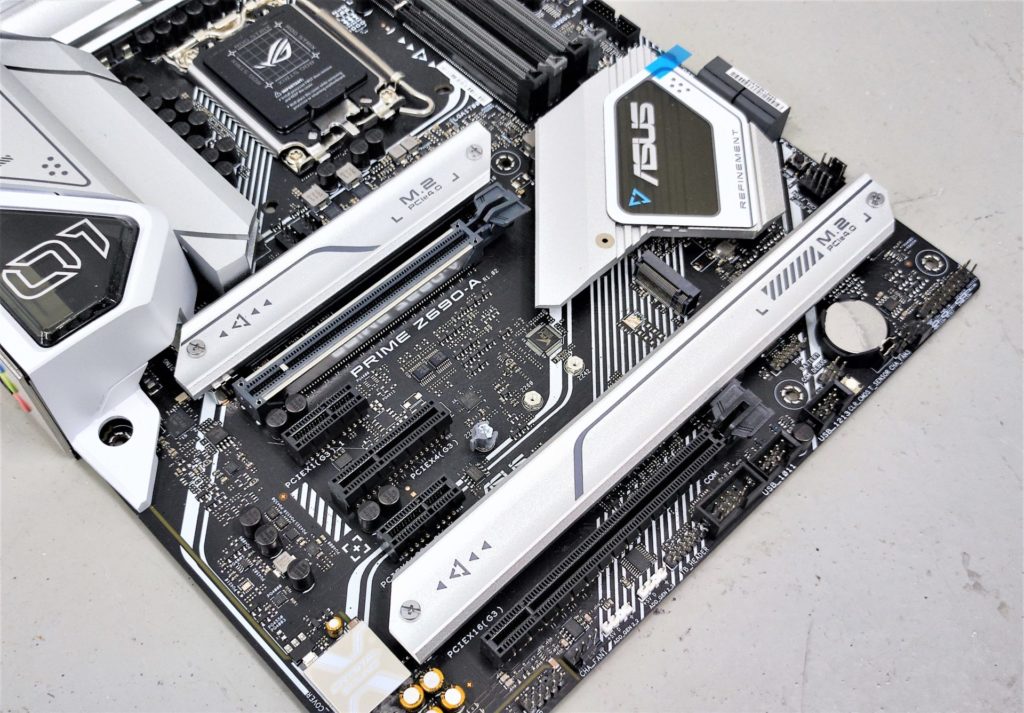 The ASUS PRIME Z690-A is probably designed to only support a single main graphics card. As such, there is only a single PCIe 5.0 x16 slot on the motherboard to allow the graphics card to run at its full expected bandwidth. The most bottom PCIe x16 slot only runs based on the PCIe 3.0 standard, and only utilizes x4 PCIe lanes instead. This means that despite it being physically a x16 slot, its bandwidth allocated could be quite limited.

Regardless, you can still add quite a number of expansion cards to the motherboard as it still have 2 x more PCIe 3.0 x1 slots and 1 x PCIe 3.0 x4 slot. We would have preferred it if more bandwidth is allocated to a secondary PCIe slot to support another graphics card, but I think we’ve got to give at take at a motherboard that’s positioned at a mainstream level. 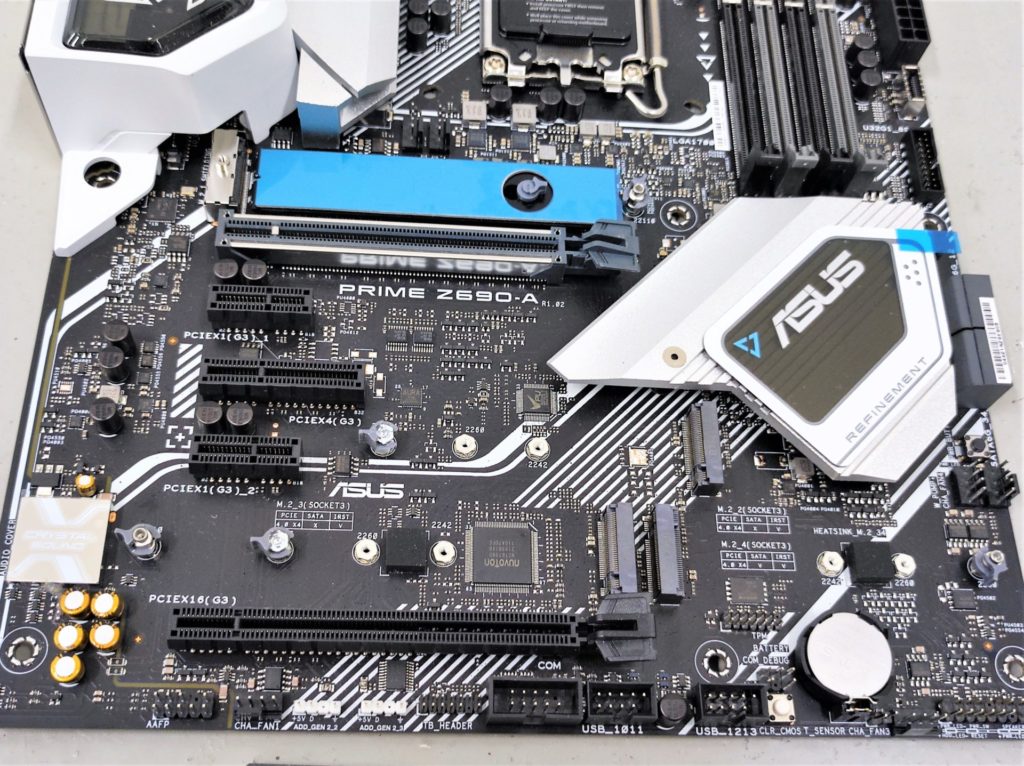 Like all other motherboard in the new 600 series motherboard from ASUS, we appreciated the “tool-free” method of installing M.2 SSDs onto the motherboard. The M.2 Q-Latch makes it extremely straightforward to install our M.2 drives. It’s also worth noting that the ASUS PRIME Z690-A has quite a big number of M.2 slots – 4 in total. The motherboard also features 4 x SATA 6Gbps ports. We would have preferred if there were more, but it’s also understandable that the number of ports could have been reduced as there are already quite a number of M.2 slots. 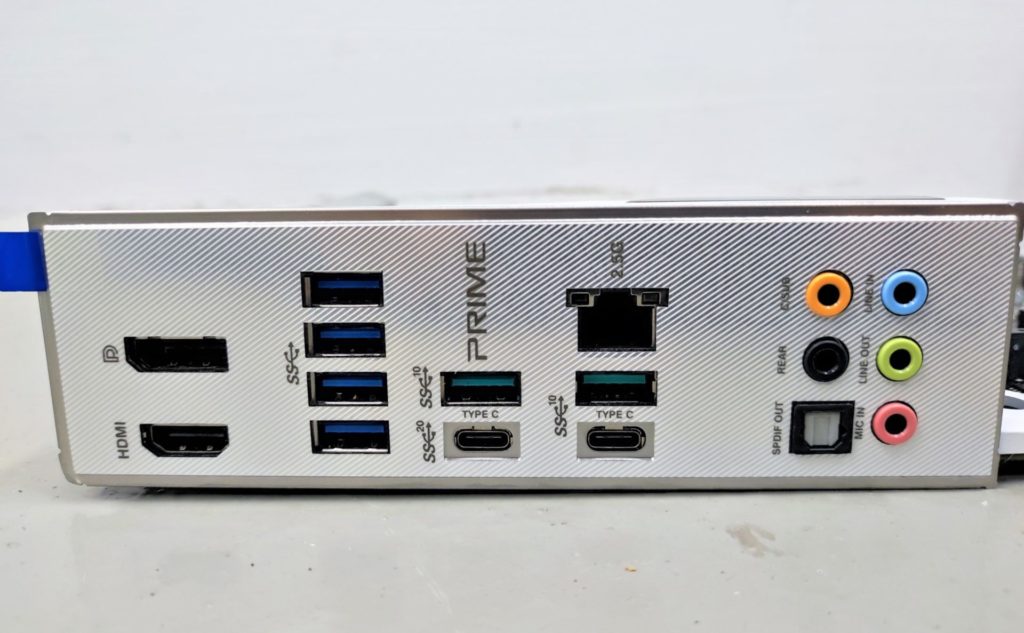 Since the new 12th Generation Intel Core Processors (non F versions) has got a integrated graphics processor, the motherboard also comes with a Display Port and HDMI port output. The motherboard also spots quite a number of USB Type-A ports. There are 6 of such ports in total. 4 of them are are USB 3.2 Gen 1 ports, while the other 2 are USB 3.2 Gen2 ports. On top of that, there are also two more USB Type-C ports. One of it is based on USB 3.2 Gen 2×2 (20Gbps), and the other is a USB 3.2 Gen2 port.

Another interesting point to take note is that the ASUS PRIME Z690-A motherboard comes integrated with a 2.5Gigabit LAN ethernet interface instead of a typical 1Gbps interface. It should be a interesting consideration point for users who have fast network connectivity at home or in office.

Further to the right, we can see the audio input and output jacks. 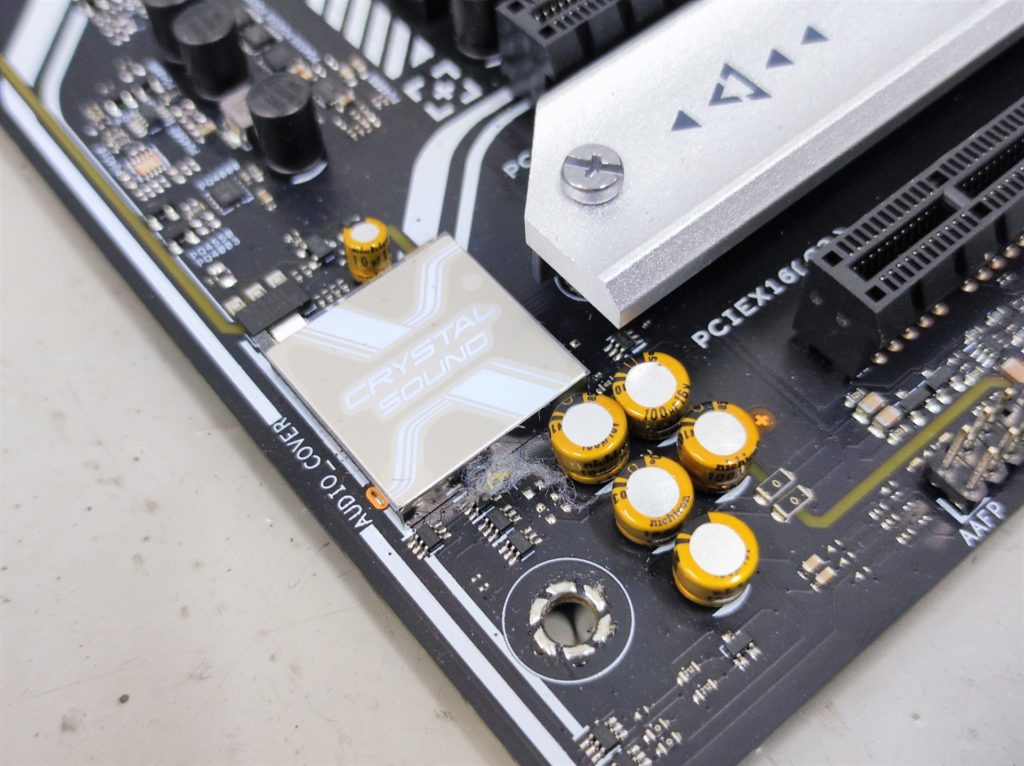 This setup is made possible by the use of audio shielding features, power pre-shielding, premium audio capacitors and a de-pop circuit. Understanding that the audio circuitry is sensitive to noise from the main power and data circuitry, dedicated audio PCB layers is designed to ensure that analogue also signal noise is kept to a minimum. We will put the ASUS PRIME Z690-A motherboard to the test and compare it to other Z690 motherboard, the latter of which is positioned to be of a more premium class. This way, we will understand if there is actually any difference in terms of performance between a premium class and a mainstream motherboard.

However, do take note that we had the ASUS PRIME Z690-A tested with a better CPU cooler instead, so that we could be certain that the system can run at it’s full intended performance level without any thermal throttling.

The tests were conducted with the following settings configured: 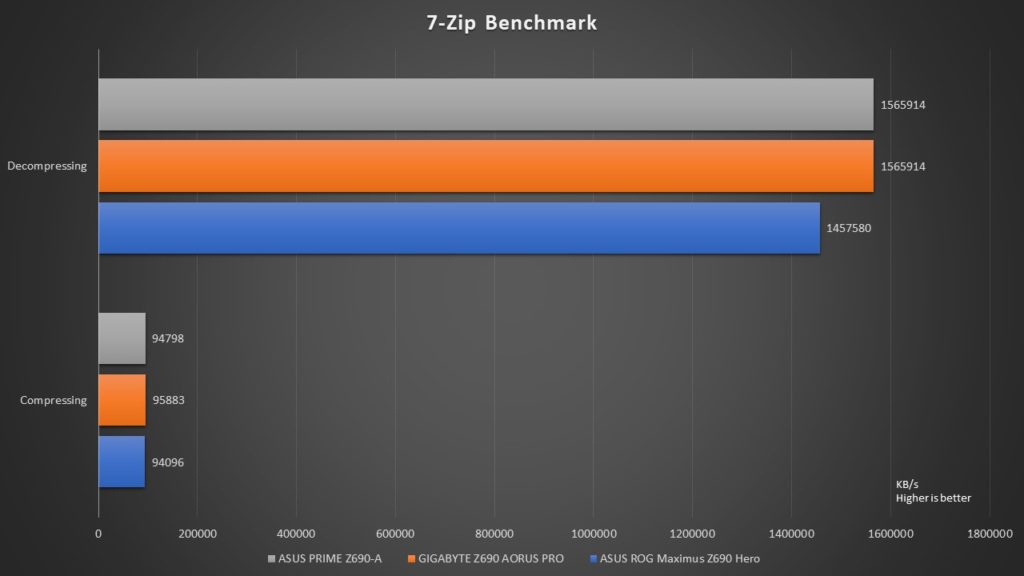 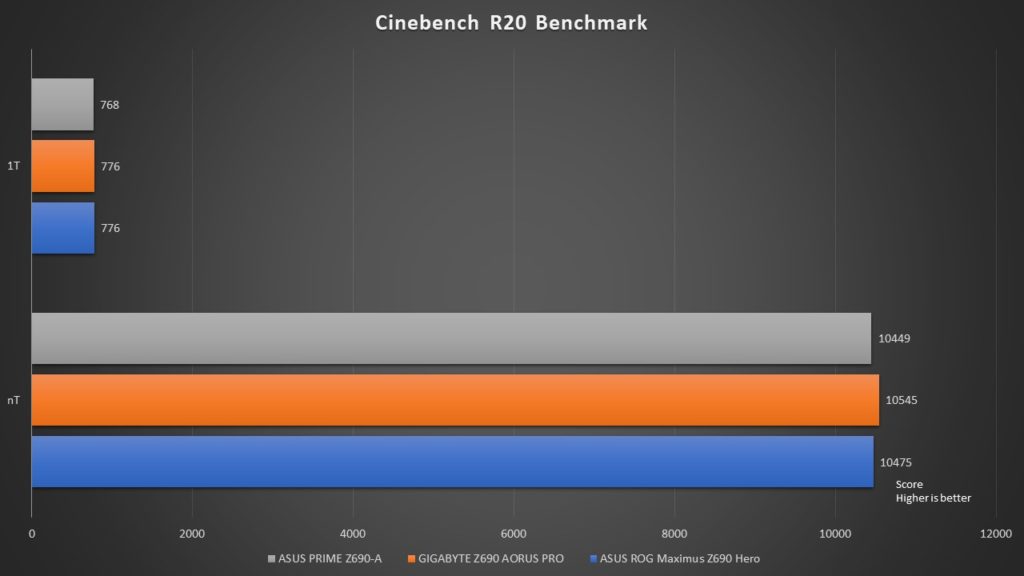 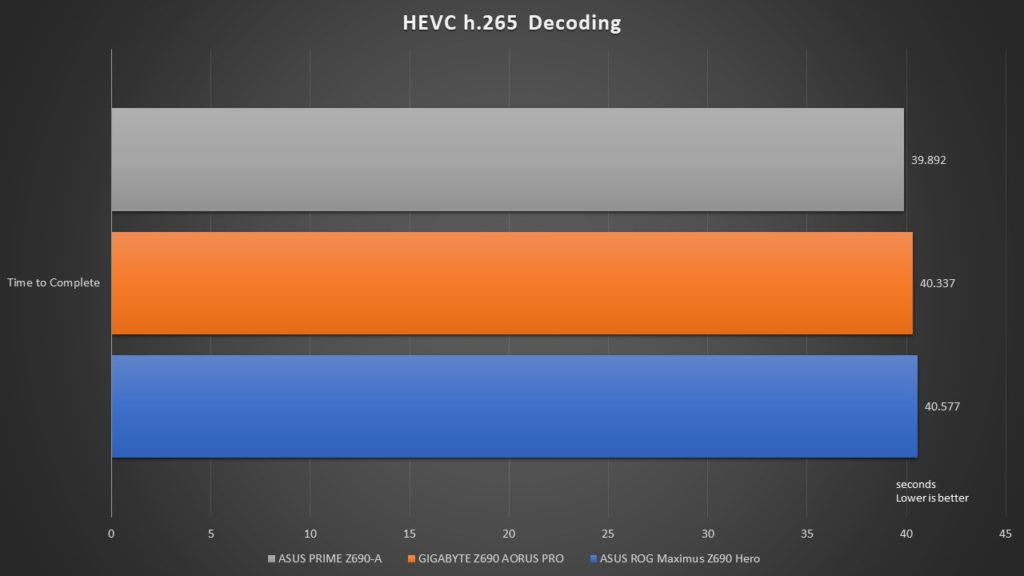 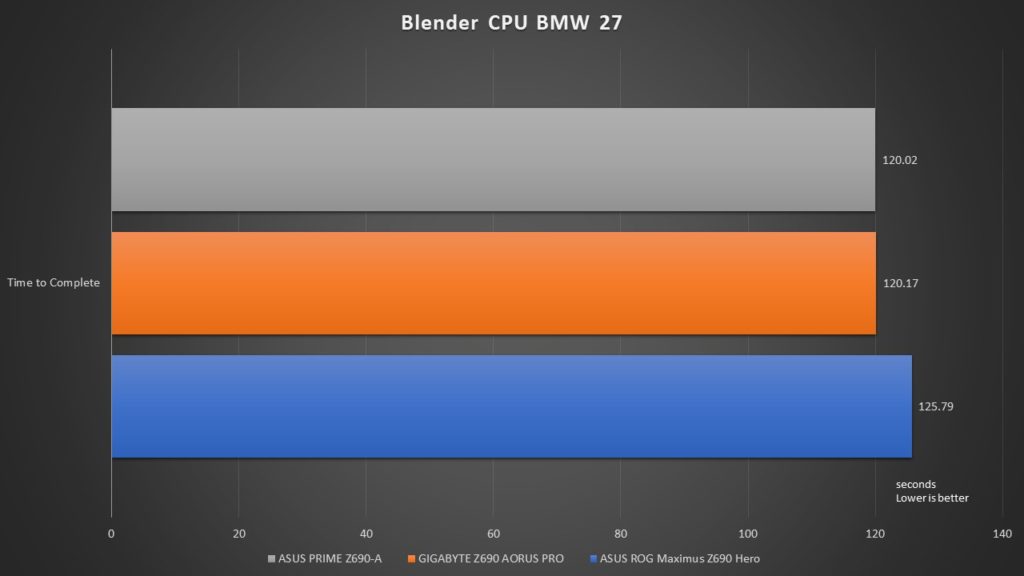 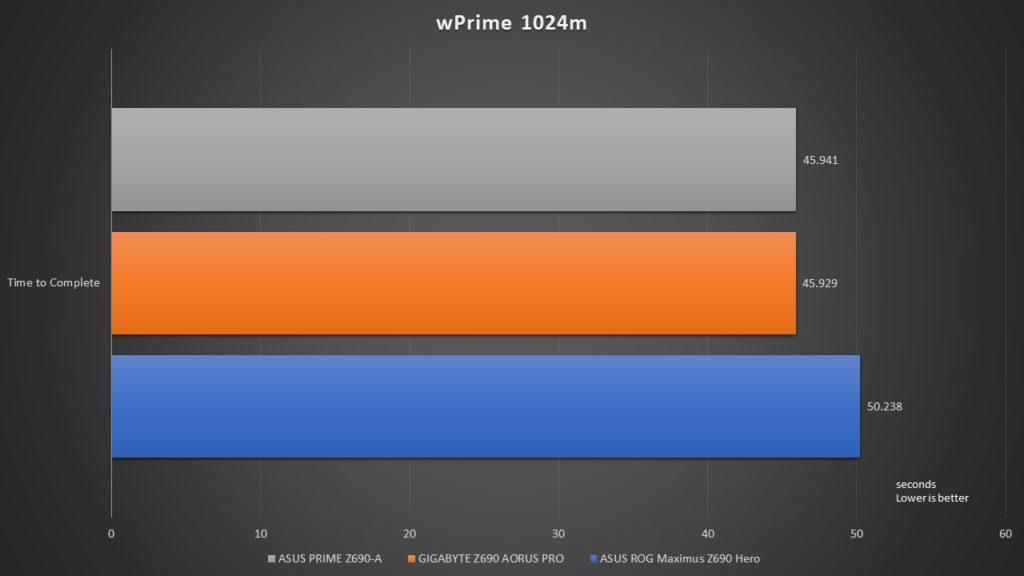 In terms of performance, we saw that the ASUS PRIME Z690-A was able to perform similarly to both other motherboard in comparison. Generally, as there are lesser components on the ASUS PRIME Z690-A, such as additional RGB lighting and other third party chips, the motherboard runs more efficiently than the other motherboard compared. Interestingly, the VRM temperature on the ASUS PRIME Z690-A was also lesser than that of the GIGABYTE Z690 AORUS PRO. Its VRM is cooled adequately, but it just isn’t as good as what’s found on the premium ASUS ROG Maximus Z690 Hero. 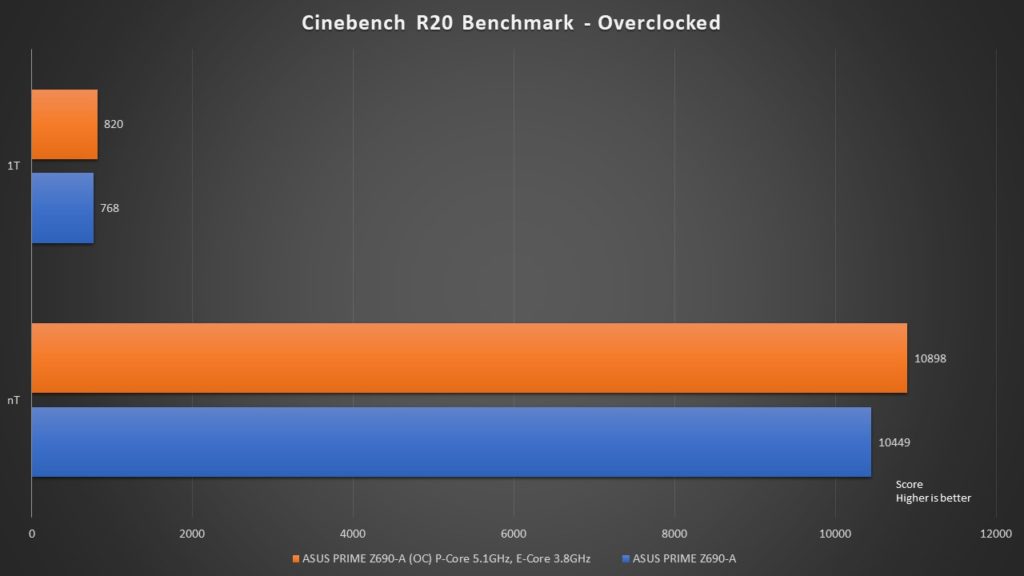 We applied ASUS’s AI overclocking, which takes in the consideration of the performance level of the CPU cooler to apply a higher frequency to the CPU. This has allowed the Intel Core i9 12900K in our test to run at 5.1GHz at its P-cores and 3.8GHz at its E-Cores during our tests (multi-threaded). For the single threaded test, the P-core could reach an even higher single core speed of 5.4GHz.

The overclocked system showed improvements in both the single threaded and multi threaded tests, showing the capabilities of the motherboard to also overclock a power hungry Intel Core i9 12900K CPU.

So what’s the actual difference between a premium and a mainstream motherboard? In fact, our tests have shown us that in terms of performance, they don’t differ a lot. The key differences for these motherboard are in fact the various features on them. Premium motherboard usually features a lot more high-end features and funkier design, which adds up to the cost.

The ASUS PRIME Z690-A is more than capable of handling the new 12th Generation Intel Core processors. Its feature set is also not too shabby either, and has got all bases covered. If you are looking at a new motherboard to take advantage of the performance gains from new technologies adopted on the new Z690 platform, the ASUS PRIME Z690-A is certainly a motherboard to consider.