When choosing a new notebook computer, performance usually isn’t the only thing that matters. Those who are always on-the-go would rather have something that’s lightweight and portable, even though there may be tradeoffs in terms of performance. That’s when the ASUS ZenBook Ultralight comes into the picture, trying its best to strike a great balance between portability and performance.

Don’t get me wrong. The ASUS ZenBook 14 Ultralight isn’t a gaming notebook computer. What it tries to achieve is to produce the best performance within a 1KG weight limit. When we mean performance, we don’t just refer to usual compute performance, but also graphics performance. By taking the advantage of both the new 11th Generation Intel Core processors and NVIDIA GeForce MX450 graphics card, the ideals of a decent day-to-day usage machine has been made within reach. 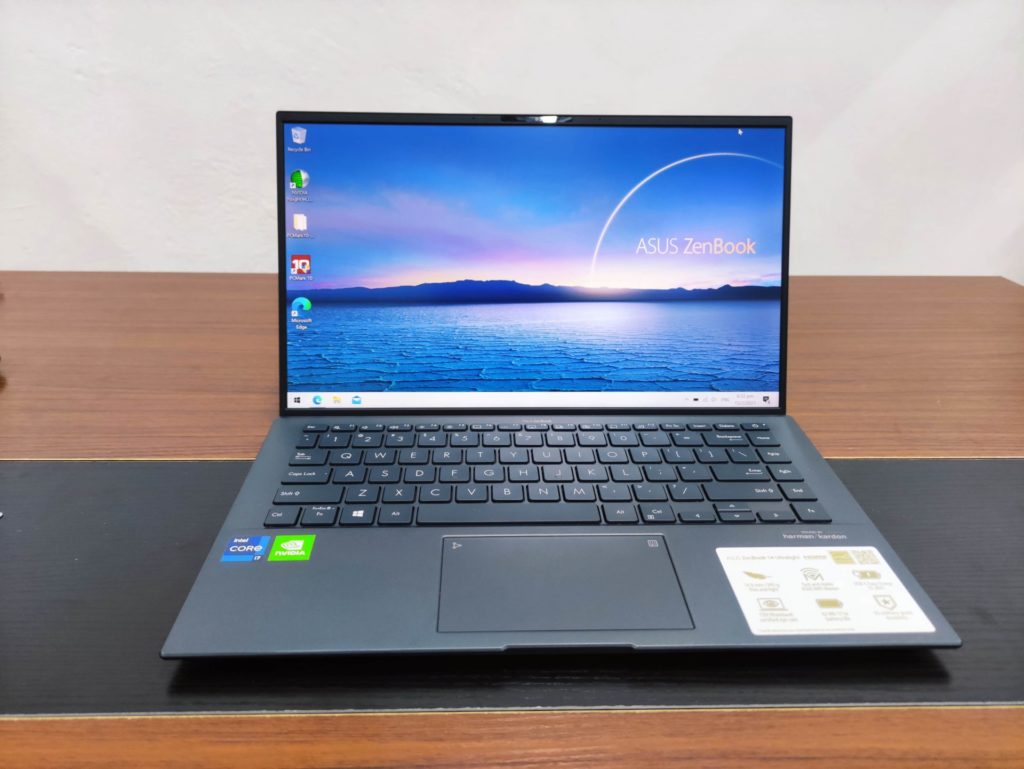 As the name suggests, the ZenBook 14 Ultralight only weighs 995g. Despite weighing this light, it still manages to pack in an Intel Core i7 processor, a dedicated NVIDIA GeForce MX450 graphics processor and even a 67Wh capacity battery. 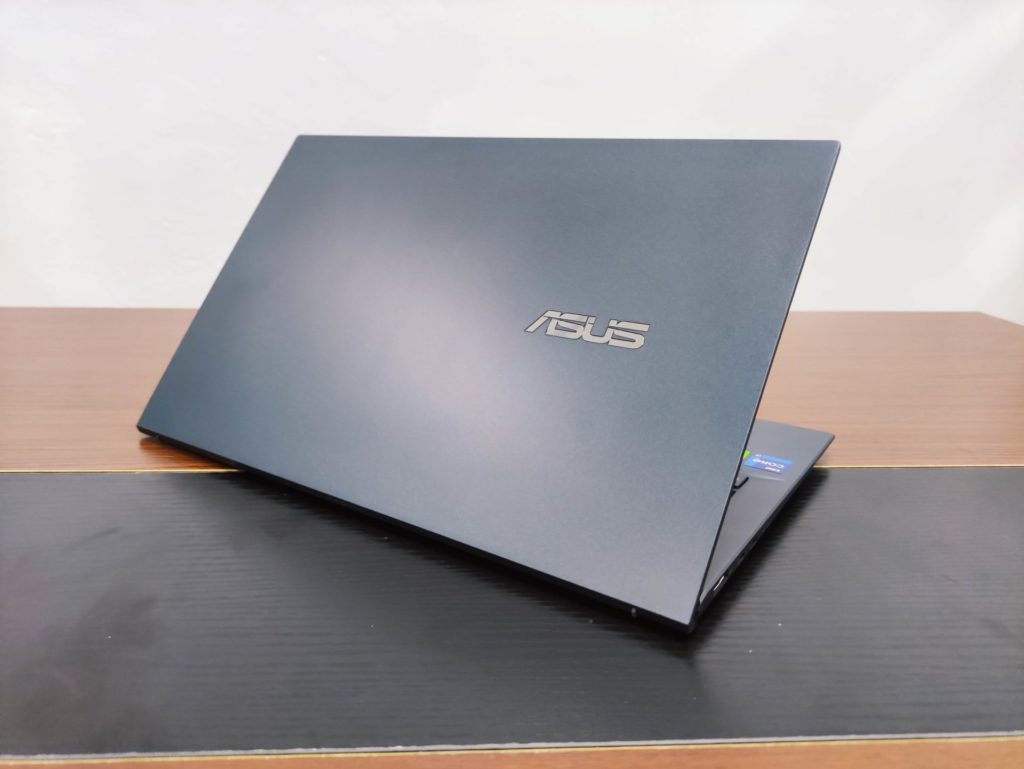 The ASUS ZenBook 14 Ultralight has been specially engineered with the use of a magnesium lithium alloy body, which also explains why it can weigh so light. Magnesium lithium alloys are amongst the lowest density metallic materials. Even though it’s light, this material is still very durable and strong, making it very suitable for notebook computers. This is perhaps also why the ZenBook 14 Ultralight can still pass the MIL-STD 810G certifications, which is a United States Military Standard. This means that the ASUS ZenBook 14 Ultralight is even able to withstand drops or bumps and operate in harsh environments. Being able to receive such a certification is also a testament of the benefits of the usage of such materials in notebook computers.

Also, one of the reasons why the ZenBook notebooks are so popular is because of its minimalist design. There just isn’t anything too fancy about the notebook, but its pursuit of perfection in design does give the products a certain image. For example, in order for the notebook to appear sleek, ASUS has pushed the limits to make sure that the bezels on the ZenBook 14 Ultralight as are slim as possible. While aiming for this feature, they did not leave out the usability of the notebook, and still managed to install a Webcam that supports Windows Hello on the unit as well. It’s such kind of persistence in perfection that sets the brand apart from competition.

Even though there isn’t a lot of expandable options on the ZenBook 14 Ultralight, it’s still very usable. Minimally, ASUS has managed to squeeze in a 3.5mm audio combo jack, full-sized HDMI port and USB Type-A port. This should already fit the requirements of most users. In fact, you probably don’t need to worry about forgetting to bring your dongles just to get your notebook computer hooked up to a external mouse, projector and headphones. Everything that you need is probably already there.

Furthermore, there are still two Thunderbolt ports on the ZenBook 14 Ultralight as well. If you really need to further connect this notebook to other external peripherals, you can easily do so too. Also, for further storage expansion, the notebook also comes with a MicroSD card expansion slot. 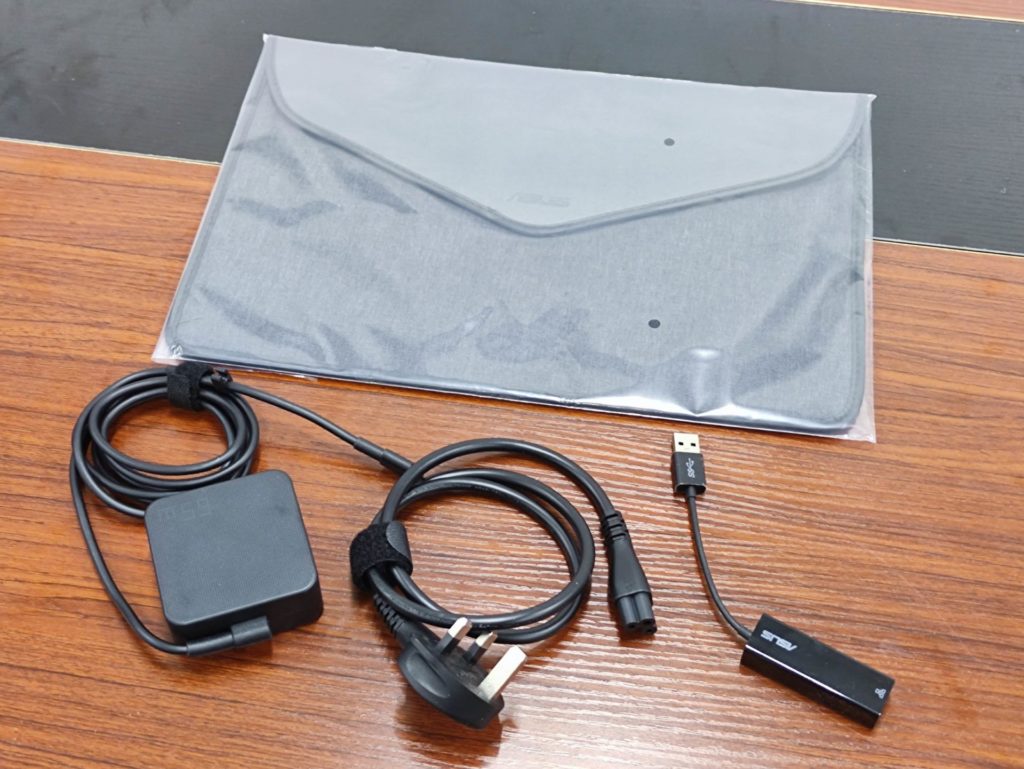 Inside the box, the notebook also comes with a sleeve case, a USB Type-A to Ethernet port and a 65W USB Type-C power adapter.

It exceeds my expectations in terms of its battery life and multimedia capabilities. The choice of using a matte surface for its display also makes the notebook suitable for both work and entertainment, and I found the speakers to perform exceptionally well for a notebook of this thinness and size. 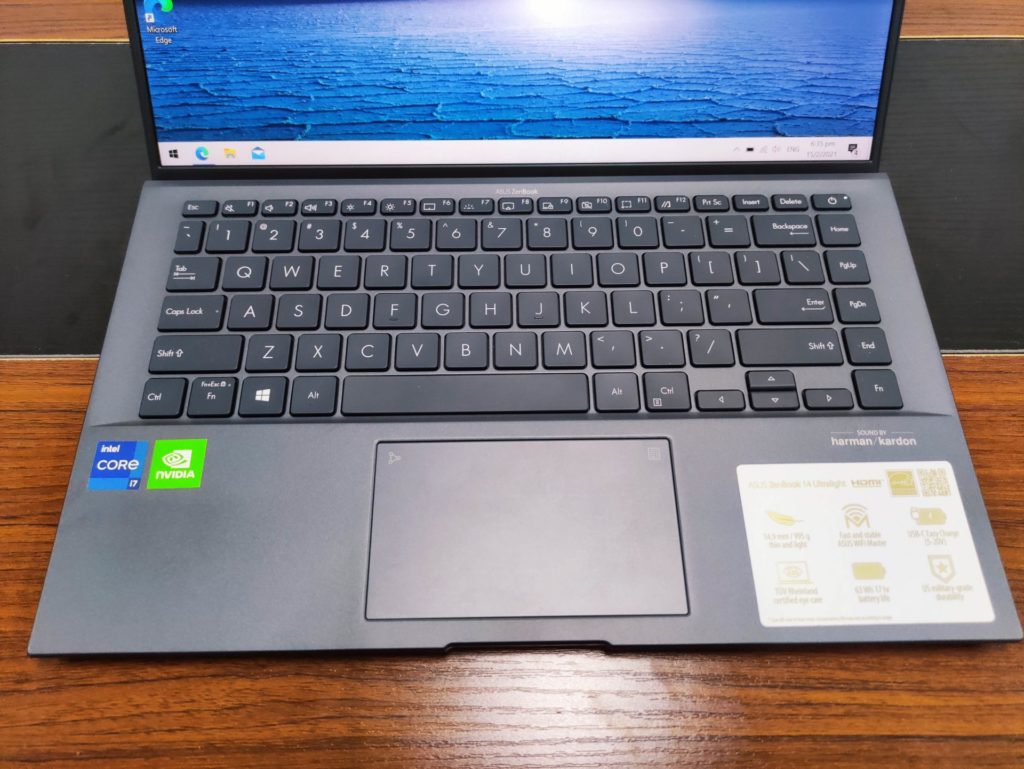 It was also a pleasure typing on this keyboard layout, as I was able to get up to speed fairly easily. However, one thing that I really hate about the keyboard is that I can’t understand why ASUS decided to place some rarely used keys on the extreme right side of the notebook. This has caused many mistypes, as for example, most people will look out for the “backspace” or “enter” key on the right end of the keyboard. Instead, they would have accidentally typed on the “page down” or “home” keys instead. Honestly, I would rather that they remove these keys totally, or make use of the function keys to enter these keys instead. Perhaps, with the extra column of space by removing these keys, they could space out or increase the size of each keys to provide an even better typing experience.

I’ve always liked the Number Pad that comes up on the trackpad. It adds a lot of convenience when using applications like excel or even the calculator. It’s probably the best implementation of a number pad with limited space. 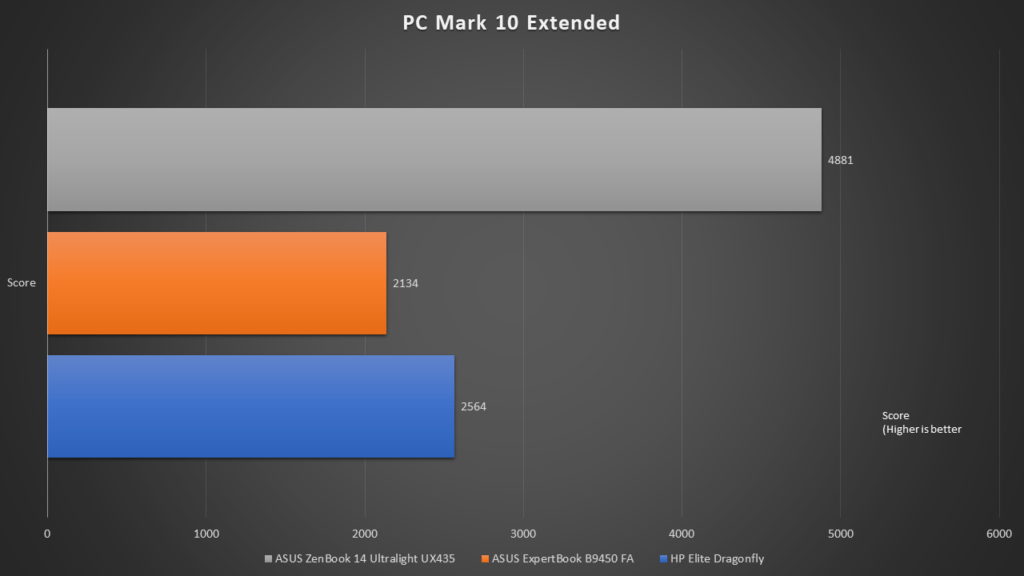 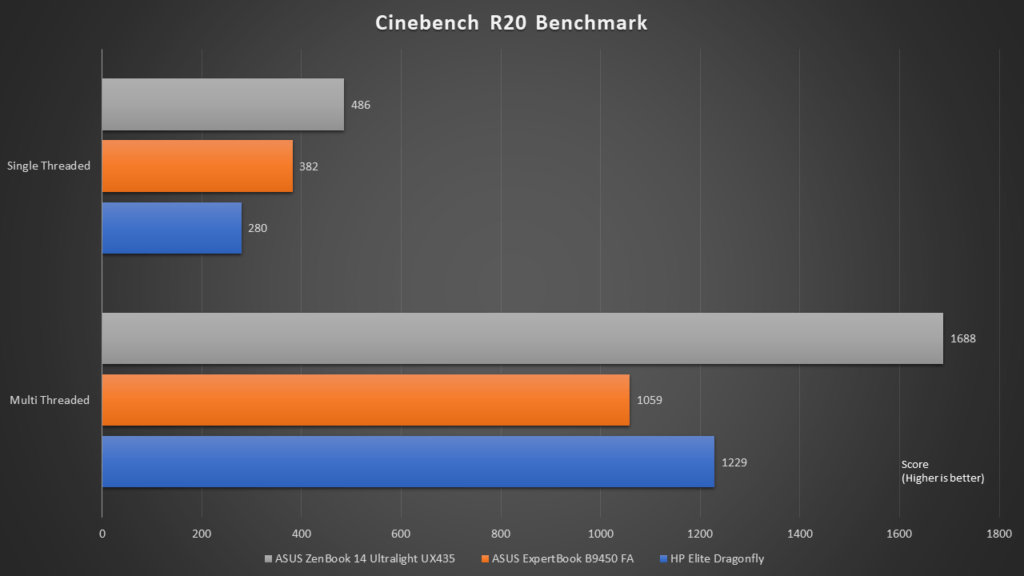 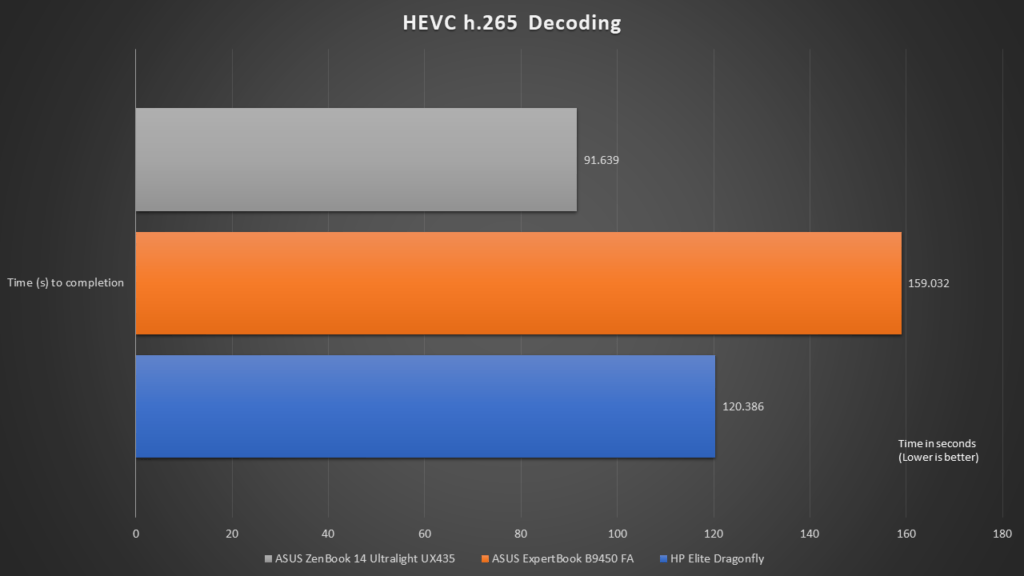 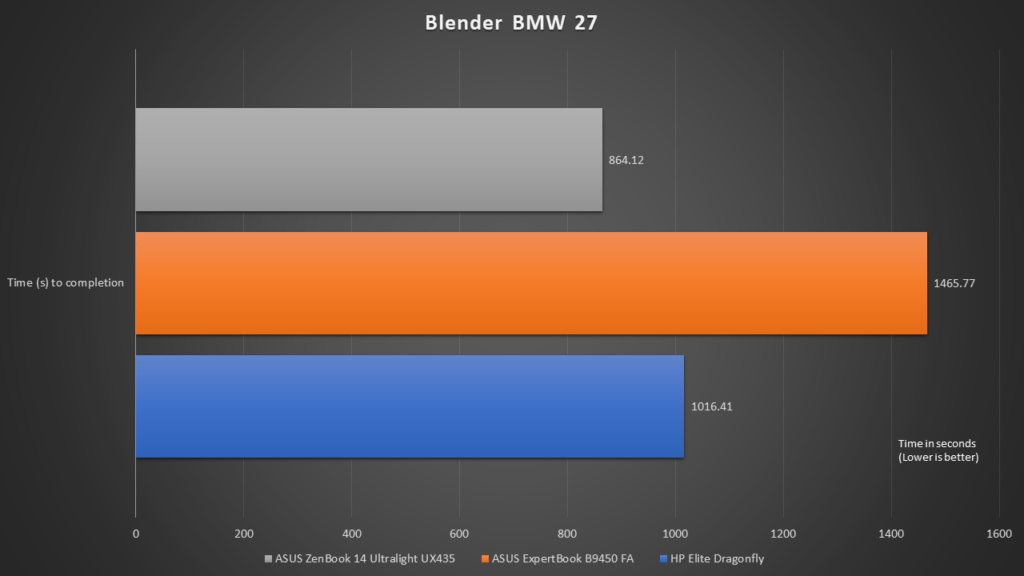 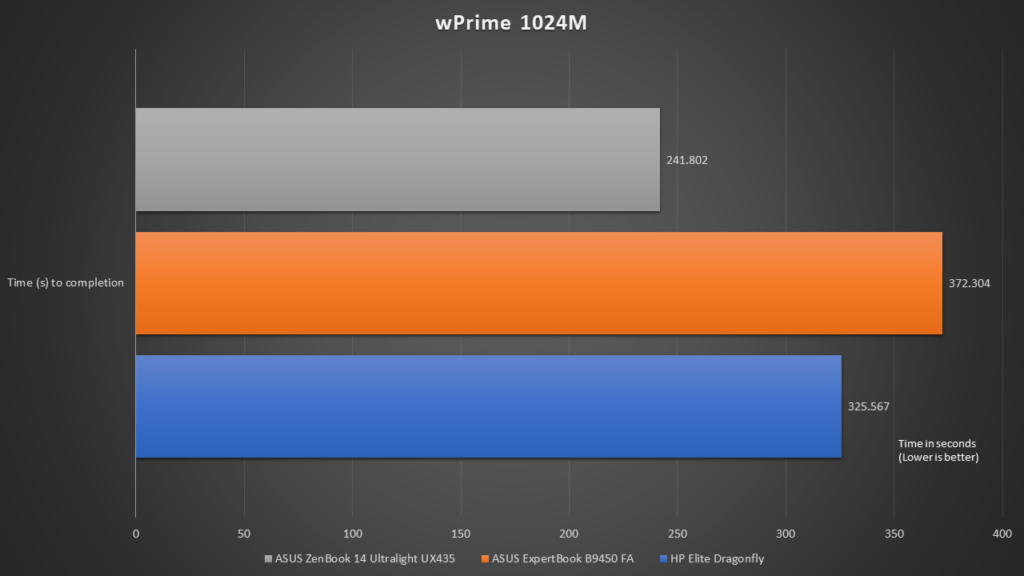 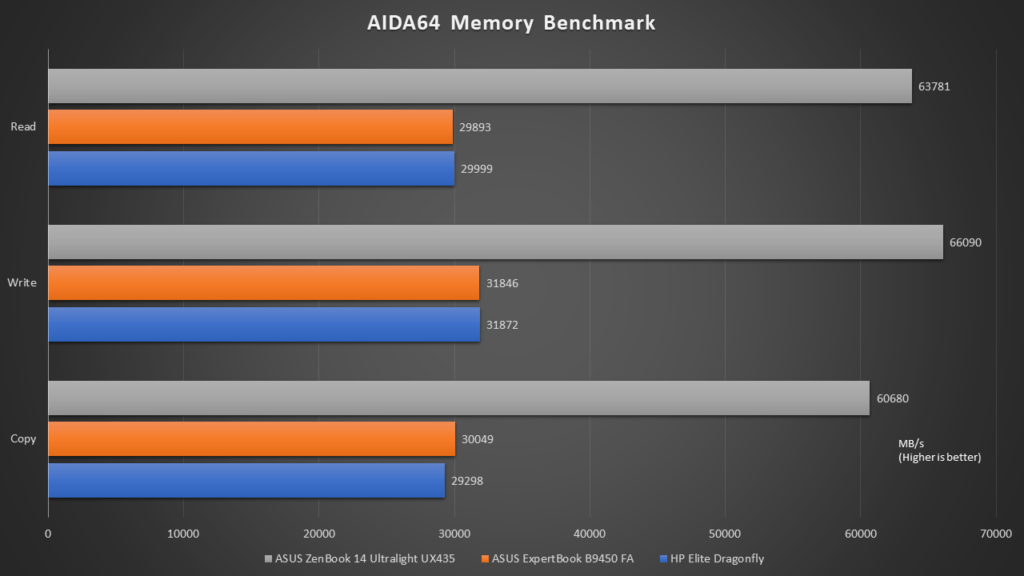 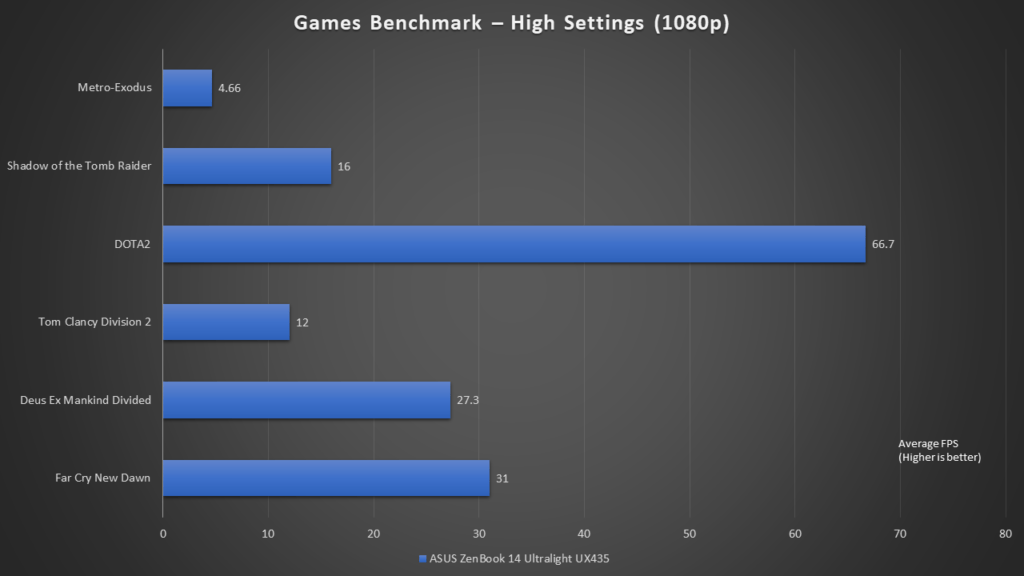 With much improved hardware components and better thermal management, the ASUS ZenBook 14 Ultralight UX435 was able to outperform the ASUS ExpertBook B9450, but is also another sub-1KG ultra lightweight notebook computer. Also, thanks to the NVIDIA GeForce MX450 dedicated graphics processor on this notebook, it was also able to run some games at decent speeds. While most of the AAA 3D games still can’t be played at a decent framerate at high settings, it could still be playable at lower settings. Well, at least you can minimally run these games without them crashing!

While stress testing the CPU of the ASUS ZenBook 14 Ultralight with Intel Burn Test, we saw the Intel Core i7 1165G7 spiked up to a temperature of 92 degree Celsius once the test started, up from an idle temperature of 50 degree Celsius. This really showed that the lack of a decent cooling solution like that found on larger notebook computers. We can’t complain too much, as it’s a tradeoff that must be made to ensure the notebook’s light weight and thin form factor.

In this scenario, the CPU had no choice but to thermal throttle. The temperature then stabilized at 72 degree Celsius.

The ASUS ZenBook 14 Ultralight also performed rather well with a battery life of 9 hours 42 minutes on the PC Mark 10 Battery – Modern Office Test. It’s more than enough for us to continuously use this laptop throughout the day, and we have no complains for it at all.

The ASUS ZenBook 14 Ultralight managed to attain a sweet spot between performance and portability. Thanks to it being equipped with the latest hardware components, it was able to improve on previously shortcomings, such as those found on the ASUS ExpertBook B9450, and excel in what it wants to be.

If you ask me if the ASUS ZenBook 14 Ultralight could be my everyday laptop, I would confidently nod my head. However, we must also put it out there to say that it’s probably not as affordable as other ZenBook models that are just a few hundred grams heavier. At a price of S$2398, you will probably have to think twice before making your purchase. But if weight is all what you care about, there’s nothing that comes near to the ZenBook 14 Ultralight in terms of its performance and practicality.