AMD Zen 3 based CPUs has been getting a lot of hype since its announcement on the 9th October 2020. Further improving the microprocessor architecture and design, these new processors are said to take over the reign of gaming performance leadership that has traditionally been held by Intel.

AMD claims that the new Zen 3 architecture delivers a 19% generational increase in instructions per cycle (IPC). Added that the current Ryzen 3000 series processors based on the Zen 2 architecture is already considerably competitive, the release of the new Ryzen 5000 series processors today will also mean a new era of CPU performance leadership from AMD. This will path the way for the future of CPUs in the consumer space.

The AMD Ryzen 5000 Series for Singapore

From tomorrow onward, four shiny new AMD Ryzen 5000 series processors will be available at retailers across the island and online. The key specifications and local pricing are summarized in the table below

Moreover, some motherboard manufacturers also announced that they will be releasing new BIOS updates for their AMD 400 series chipset motherboards to support the latest AMD Ryzen 5000 series processors as well. As a result, you probably don’t need to upgrade to a new motherboard just use the latest Ryzen 5000 CPU. Well, the main consideration should rather be if the new AMD Ryzen 5000 CPUs’ improved performance levels are worth your upgrade.

The new AMD Zen 3 Core architecture that is featured on the AMD Ryzen 5000 Series processors differs from Zen 2 in these areas:

AMD mentioned that Zen 3 is in fact a ground-up redesign with major performance and functionality improvements. They have learned from their high-performance Zen and Zen 2 architectures to further push the boundaries of CPU performance for Zen 3. The fact that the Zen 3 micro-architecture is still based on the same 7nm process from TSMC, the performance improvements on the new processors are largely attributed to the new design.

While on paper, nothing much has changed between the two classes of CPUs. Between them, we can now see that the Ryzen 9 5900X does not come with a thermal solution within its box, and that the Ryzen 5 5600X got upgraded with the Wraith Stealth instead of Wraith Spire cooler.

Similarly, both Zen 3 based processors also had a 100MHz drop in base clock, but a 200MHz bump in Max Boost Clock. The processors are also equipped with Precision Boost 2.0, which automatically drives the cores into its highest possible frequency based on the limits in power and temperatures. Not to mention, a higher max boost clock will also mean higher performance while running applications.

While it would be sensible to compare the AMD Ryzen 5000 series processors with the current offerings from Intel, we would like to give a different perspective instead. As AMD has already gotten significant market share in the x86 CPU market, I’m quite sure that many Ryzen 3000 series desktop CPU owners will be wondering if upgrading to the new Ryzen 5000 CPUs will be worthwhile. Furthermore, since their current motherboard will most likely be already be compatible with the new Ryzen 5000 CPU, upgrading will be as straightforward as just replacing the CPU. It’s certainly a proposition worth considering. 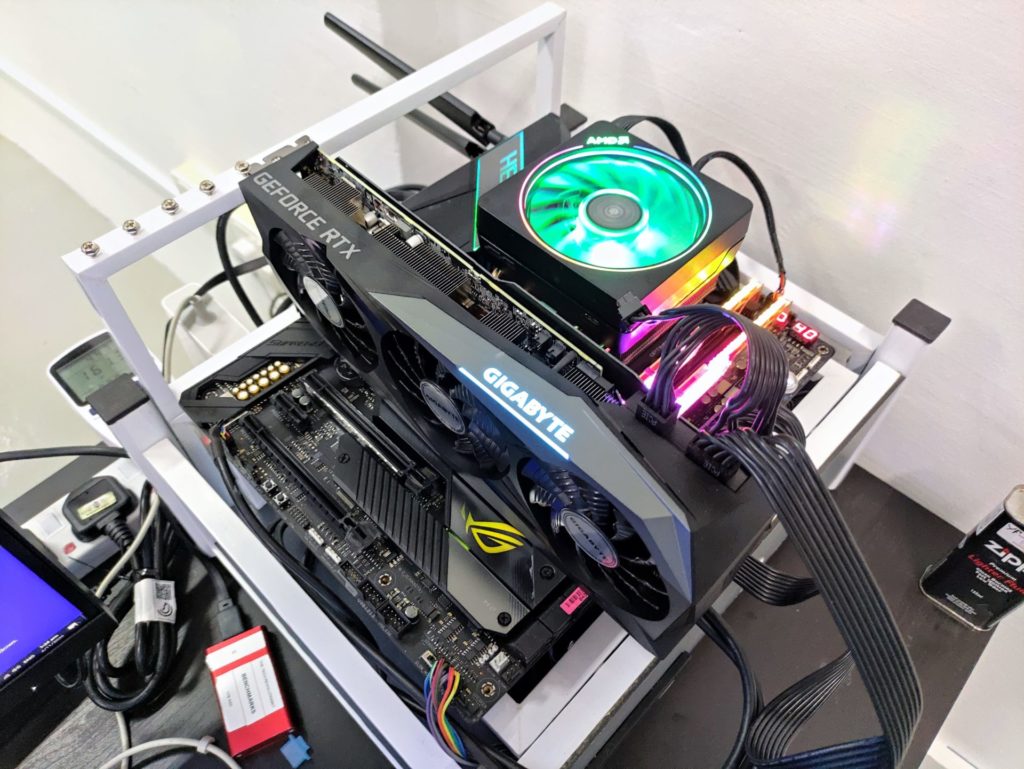 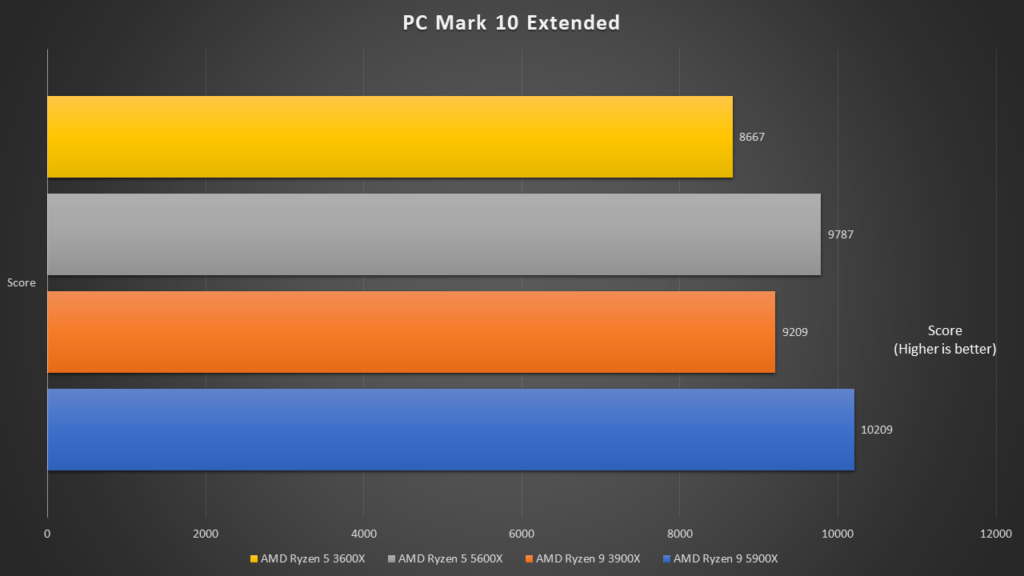 PC Mark 10 Extended tests the overall system performance by simulating various kinds of PC usage scenarios. What’s interesting in the results is that it’s shown that the 6Core/12Threads Ryzen 5 5600X actually surpasses the performance of a much more expensive 12 Core/24 Threads Ryzen 9 3900X. This certainly has shown how much the Zen 3 processors have grown in order to achieve such a significant feat. Nonetheless, we must keep in mind that the PC Mark 10 Extended tests focuses only on simple software applications. As some software application may not take advantage of the multi-core advantage of the Ryzen 9 3900X over the Ryzen 5 5600X, and that the Ryzen 5 5600X is able to perform more work in a single clock due to its higher IPC, this could explain the lead.

The PC Mark 10 Extended test has also shown us how having more cores does not mean that the system will run faster. It’s still highly dependent on the type of applications you are running on the computer. 7-Zip is a document compressing and decompressing tool. This application is heavily multithreaded, and reflects how more cores can result in faster decompression and compressing. While the new Ryzen 9 5900X remains on top, it’s noteworthy to see how much improvement the Zen 3 based processors have over the Zen 2 processors. 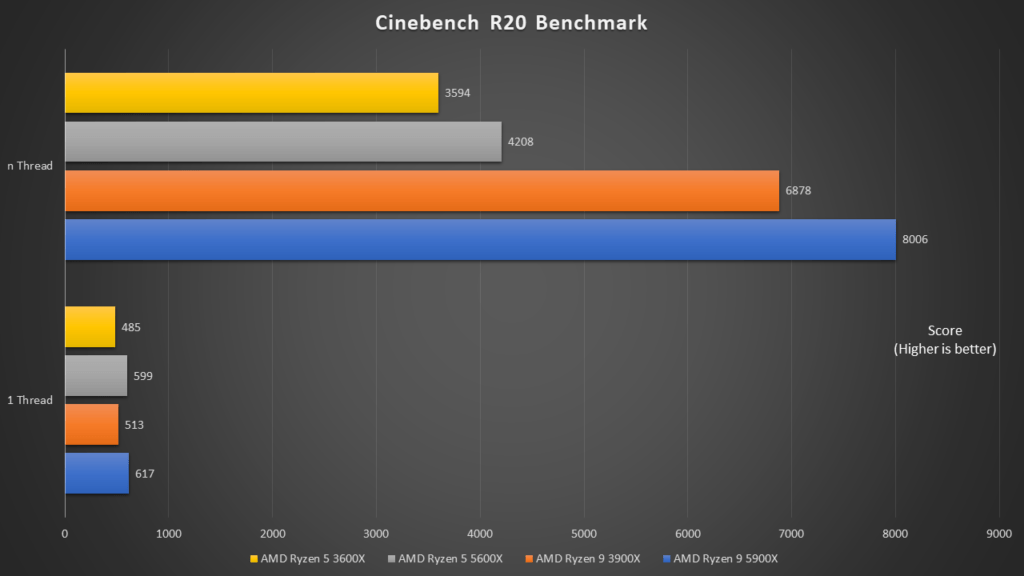 Cinebench R20 is a graphics rendering tool which is commonly used to measure a CPU’s single and multi-threaded performance. In the single threaded tests, we can see how the Ryzen 5 5600X and Ryzen 9 5900X works so well, achieving scores much higher than its predecessors. This performance level is also directly translated into the multi-threaded tests. 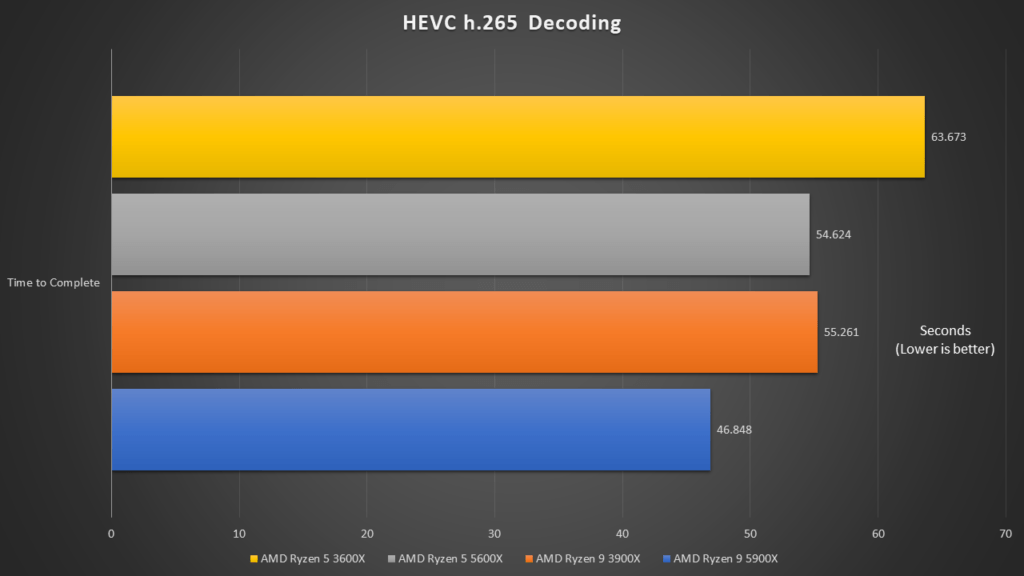 Yet again, the Ryzen 5 5600X was able to perform faster than the Ryzen 9 3900X in this H.265 media decoding test. There is no doubt that the AMD Zen 3 Core architecture will also bring about significant performance and productivity increase when running these kinds of media processing applications. 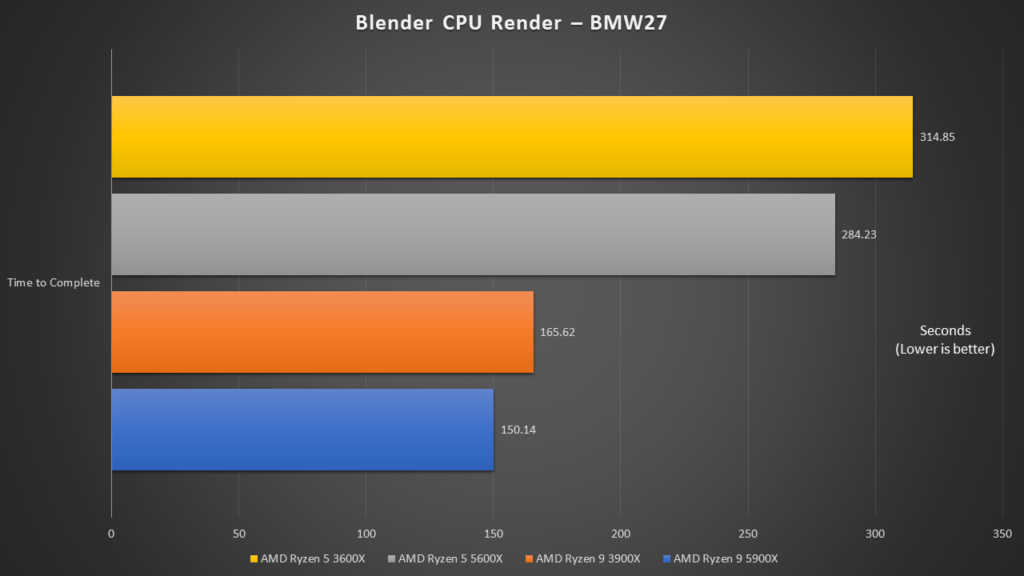 The Blender rendering test also showed the prowess of the new Ryzen 5 5600X and Ryzen 9 5900X. Both processors were able to shave off previous seconds to complete the rendering tasks faster than their predecessors. 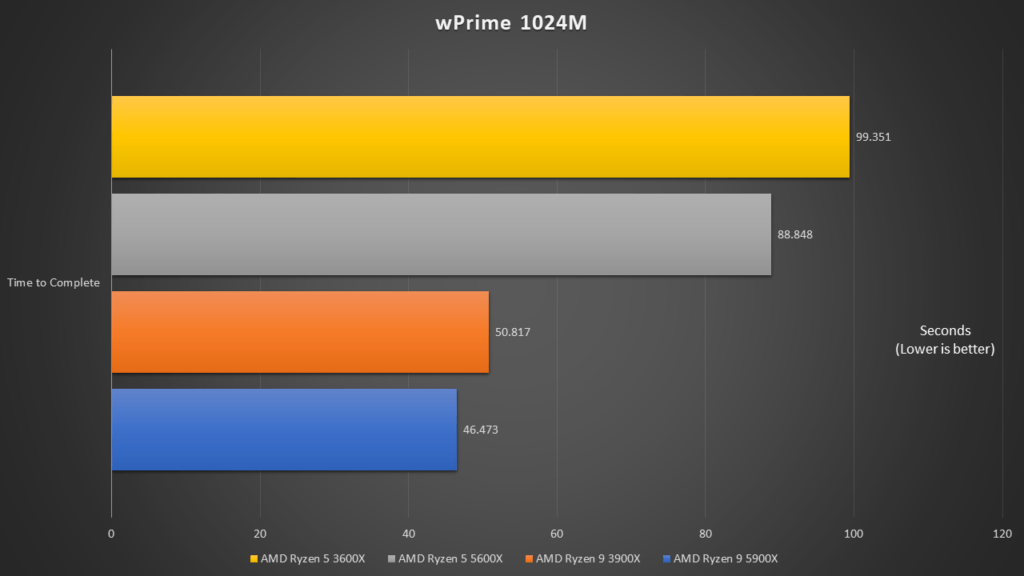 wPrime, a multi-threaded synthetic Prime number finding benchmark test, is used to test the performance of multi-threaded CPUs. Similarly, the tests have shown that the new Zen 3 processors came up ahead in the tests, flexing their prowess in such computation. 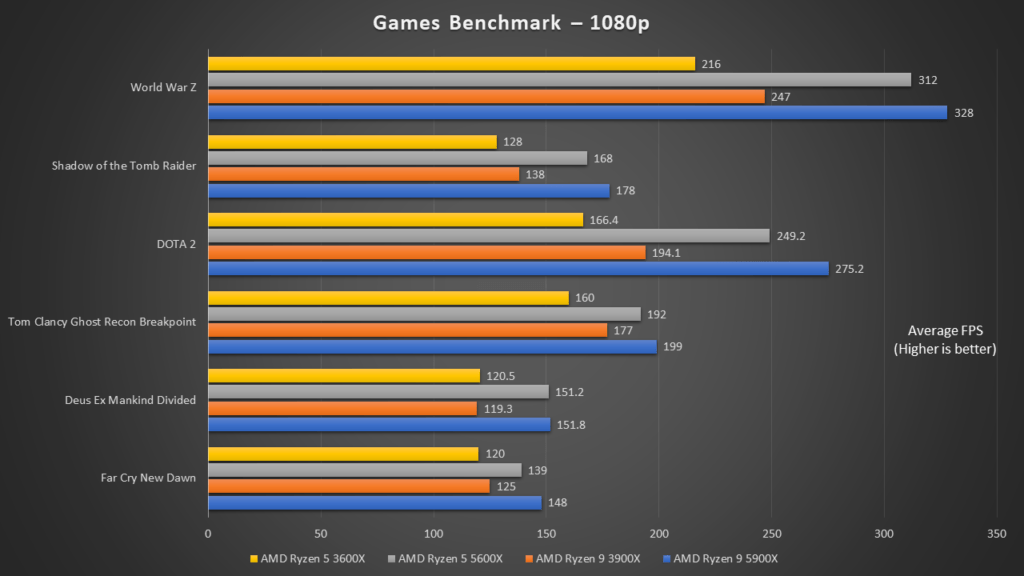 I think we have a clear winner here. When it comes to games, the number of cores on a processor usually matter less. In our 1080p gaming test, where performance results are CPU bound, we could finally see how CPU performance levels could have such a high impact on gaming experience and performance. The AMD Ryzen 5 5600X and Ryzen 9 5900X had a clear lead and advantage over their older Zen 2 brothers. 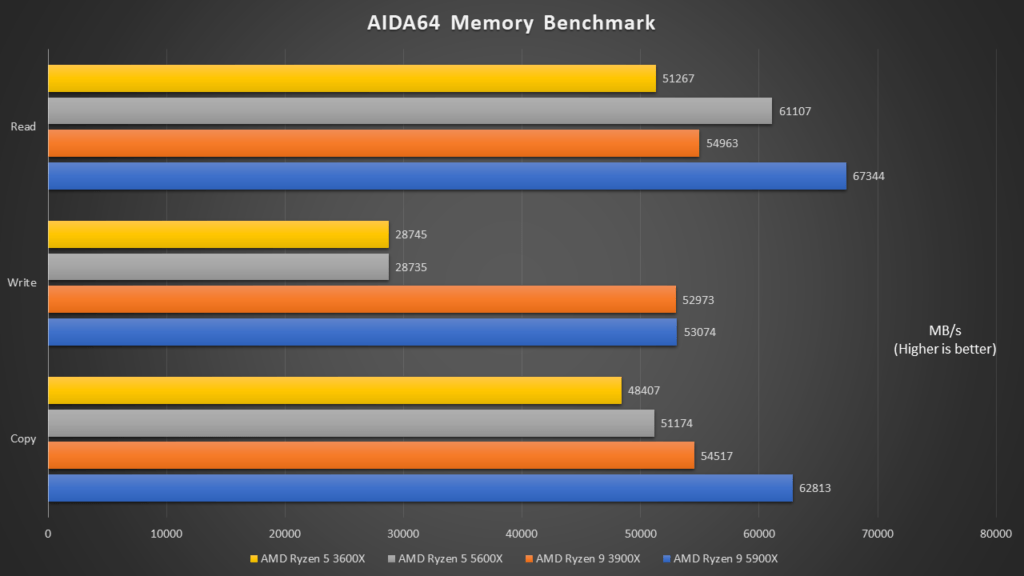 Moving on to memory performance, we can see how the Zen 3 based CPUs has an advantage over memory read performance. This is related to the improved memory access architecture that’s found on the new Zen 3 architecture.

As for the write test, the performance remained similar. As the AMD Ryzen 5 5600X and 3600X CPUs are only configured within a single CCD, they only have a single communication lane to the I/O die, which results in the lower memory write speed as compared to the Ryzen 9 processors. 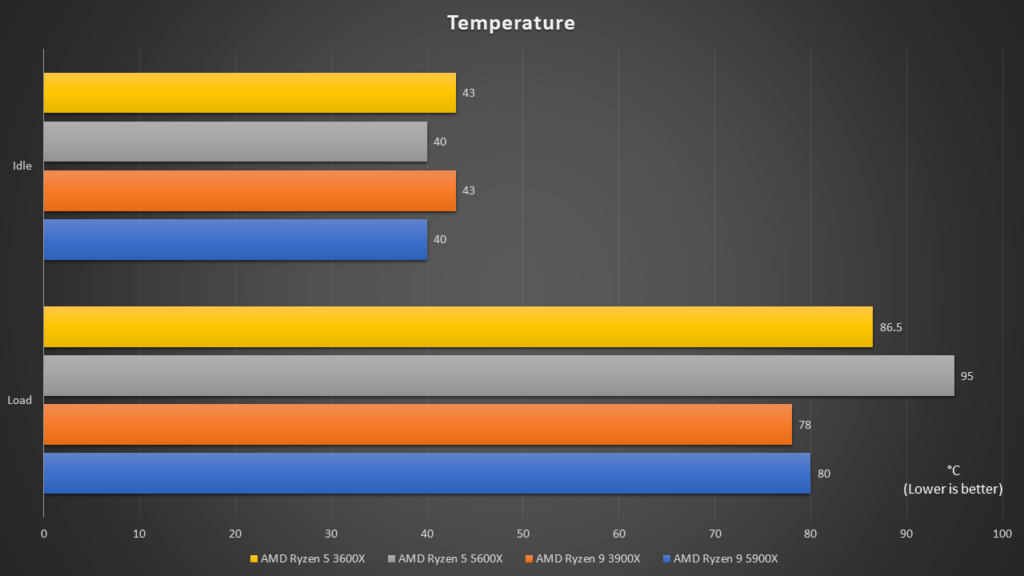 Both newer Zen 3 based processors idled at a slightly lower temperature. This could be due to their slightly lower base clock speed as compared to the Zen 2 parts. However, when on load, processors behaved rather interestingly. The AMD Ryzen 5 5600X hit a high temperature of 95 degree Celsius, as it was clocked at a higher frequency due to precision boost 2.0. With the Intel Burn Test, the Ryzen 9 processors even recorded lower temperatures from 78 to 80 degree Celsius as they have their core frequency limited. 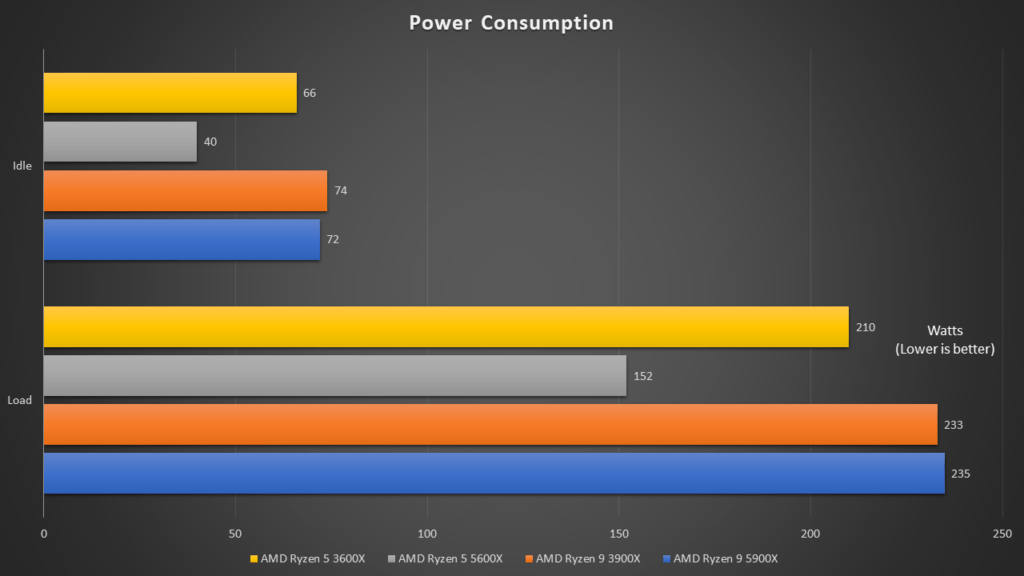 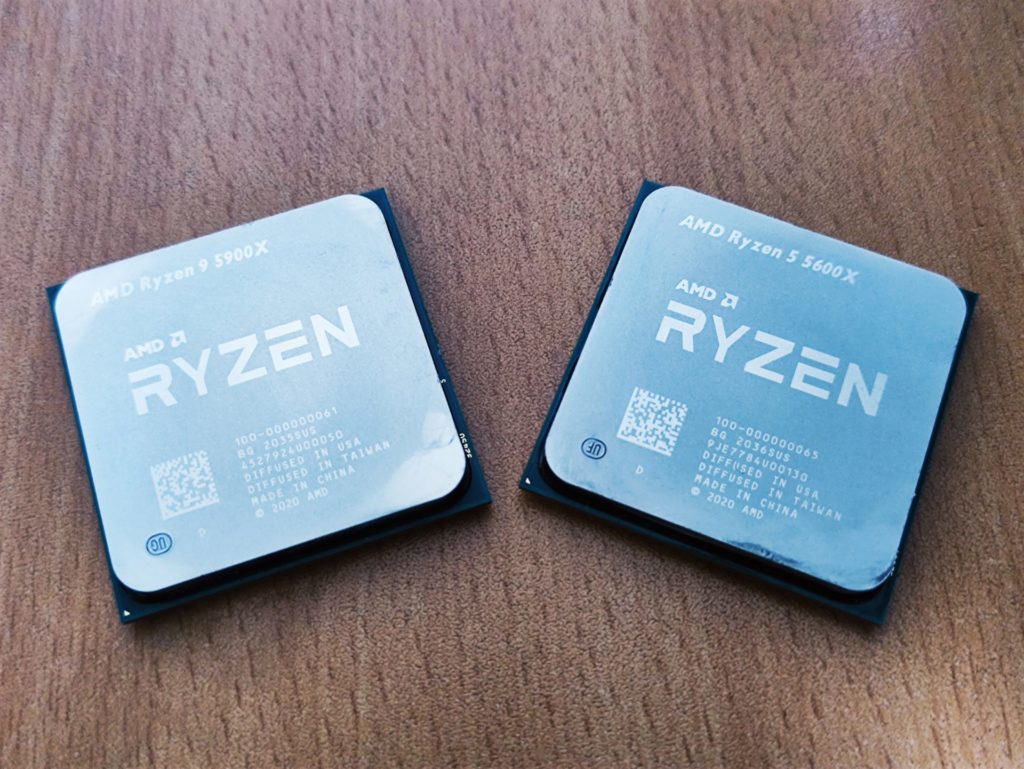 It was a pleasure testing both the AMD Ryzen 9 5900X and Ryzen 5 5600X. Both processors have shown how well they can perform, and there is no doubt that we would recommend these new processors to anyone who are building a new computer system. Even though they are priced higher than what they were used to, we still think that the premium you pay is not unfounded. You are certainly achieving more than what you would be used to paying.

As for current users of AMD Ryzen 3000 series processors, will it be worth the upgrade? More likely than not, we would recommend it. The performance gains in games and other applications are considerably significant across the board. If you are seeking for more performance, the new AMD Ryzen 5000 series processors is the way to go. Moreover, you probably don’t even need to spend too much, as you can simply reuse all of your existing PC components and only change the CPU. AMD certainly made it very compelling for an upgrade.

AMD has certainly done a great deal of work when it comes to improving their CPU product offerings. Just within a short period of 1 year, they managed to release a new processor which has much more performance improvements. While competition have their innovation bugged with process woes, AMD was able to make full use of their partnership with TSMC to enable continued innovations and improvements.

The introduction of the new AMD Zen 3 Core architecture is a defining moment in the x86 CPU space, as AMD takes the crown from competition and becomes the performance King. They have taken a clear lead when it comes to showing what the Zen architectures are capable of, now that it is in its third iteration. Now that Zen 4 architecture is also in the works, it makes us wonder just how much more performance you can push out from a small CPU. That’s something which we’ll look forward to, hopefully in the near future.

We’re also just surprised that the Zen 3 reiteration on the 7nm node could bring about this much performance gain. It makes us wonder what Intel has been working on, judging that they have been on 14nm for the past 6 years.

As the competition gets heated up, it would be certainly interesting to see how the CPU wars unfolds in the coming years. Just like a game of Avalon between the Red and Blue faction, you will never know who will be the final winners until all the cards are unveiled.