The first AMD CPUs that are based on the Zen 2 architecture were first released in July 2019. These are the third iteration of the popular Ryzen CPUs. However, instead releasing a full lineup, AMD only announced the Ryzen 5 to Ryzen 9 processors, leaving the Ryzen 3 out. Almost a year has gone, and riding on the success of the 3rd Generation Ryzen processors, the Ryzen 3 3300X and 3100 are finally here.

Not to be mistaken with the Ryzen 3 3200G, which is still based on the Zen+ architecture, the new Ryzen 3 3300X and Ryzen 3 3100 are the two new processors that are based on Zen 2 to make it to the market. Unlike its predecessors, the Ryzen 3 3300 and 3100 has Simultaneous Multi-Threading enabled. These new 4 core CPUs can work on two threads on each core each. With the increased parallelism, they are expected to perform much better than before.

In this review, we are going to take a closer look at the performance of the two new Ryzen 3 processors from AMD. We will also find out what are the key differences between these two processors, and how well they can overclock.

The 3rd Generation Ryzen have made their name to be one of the best processors in the market, even surpassing their rivals whom had held the crown for many years. The new AMD Ryzen 3 processors are expected to bring even more value to the table, allowing gamers to choose from an ever variety of products that suit their budget.

Even though the new Ryzen 3 3300X and 3100 are said to be “entry level” products and cost significantly lesser than their big brothers, they are designed to perform just as well for games and other applications. Do check out the performance of these products below. 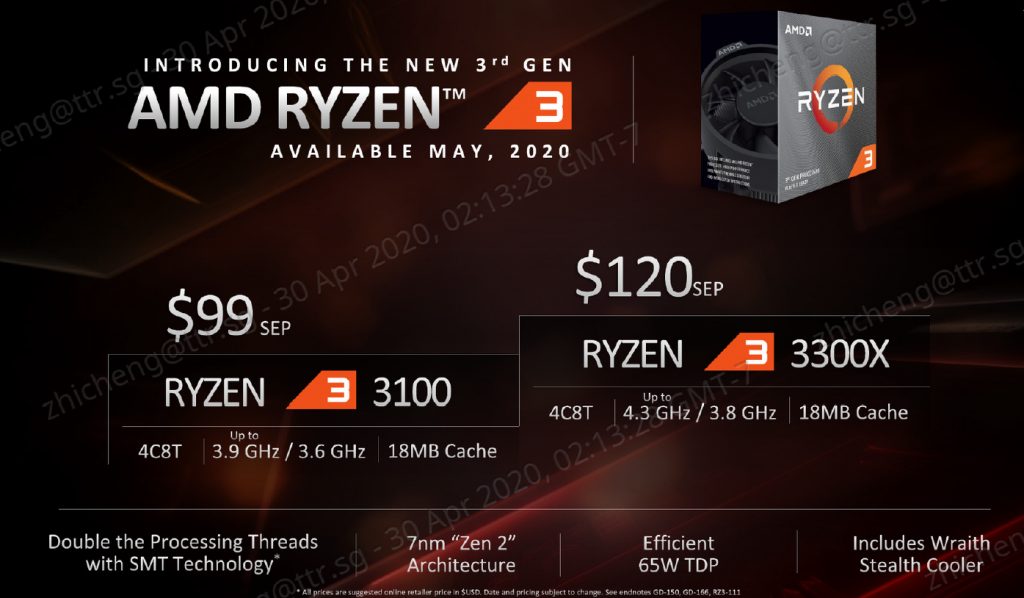 As you would expect, a higher number in its model number most probably means that it should perform better. Indeed, the Ryzen 3 3300X is clocked at a higher speed than the Ryzen 3 3100. However, even it is so, they should be considered as two very different processors. 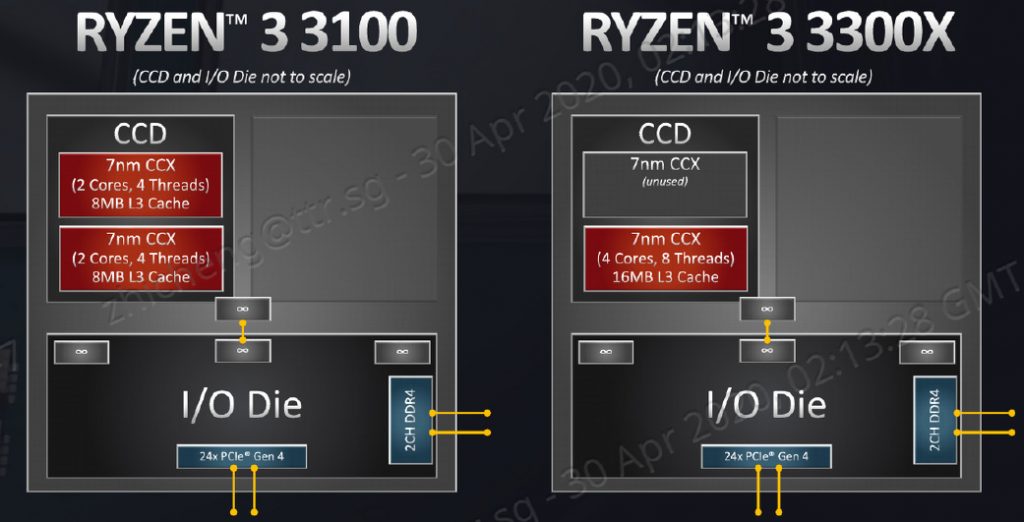 As we understand, all 3rd Generation Ryzen processors comes initially with 16 cores. These cores are housed in two separate CCD (Core Chiplet Die). Each CCD contains two CCX (Core Complex), which each will have 4 core. A Ryzen 3 processor, each with 4 cores, will have their cores coming all from a single CCD. A Ryzen 3 3300X will have all 4 cores from a single CCX, while the Ryzen 3100 will have 2 cores each coming from 2 CCX.

This means that even though they both come from the same brand name, the Ryzen 3 3300X should perform better than the Ryzen 3 3100 when clocked at the same speed. This is because the Ryzen 3 3300X will benefit from lower latency during processing. It also has an unified 16MB L3 cache for all cores and threads. This architecture should bring about high performance.

In our tests, we will compare the two new Ryzen 3 3300X and 3100 with its predecessors, namely the Ryzen 5 3400G. The Ryzen 5 3400G is based on the older Zen+ architecture, and is created with the 12nm processor technology. As 7nm processors, the Ryzen 3 3300X and 3100 should carry a much expected advantage over its predecessor.

The specifications of the setup is shown below. Do also take note that the Ryzen 5 3400G ran tests only on its integrated Vega 11 graphics. Therefore, only CPU related performance results should be relevant. 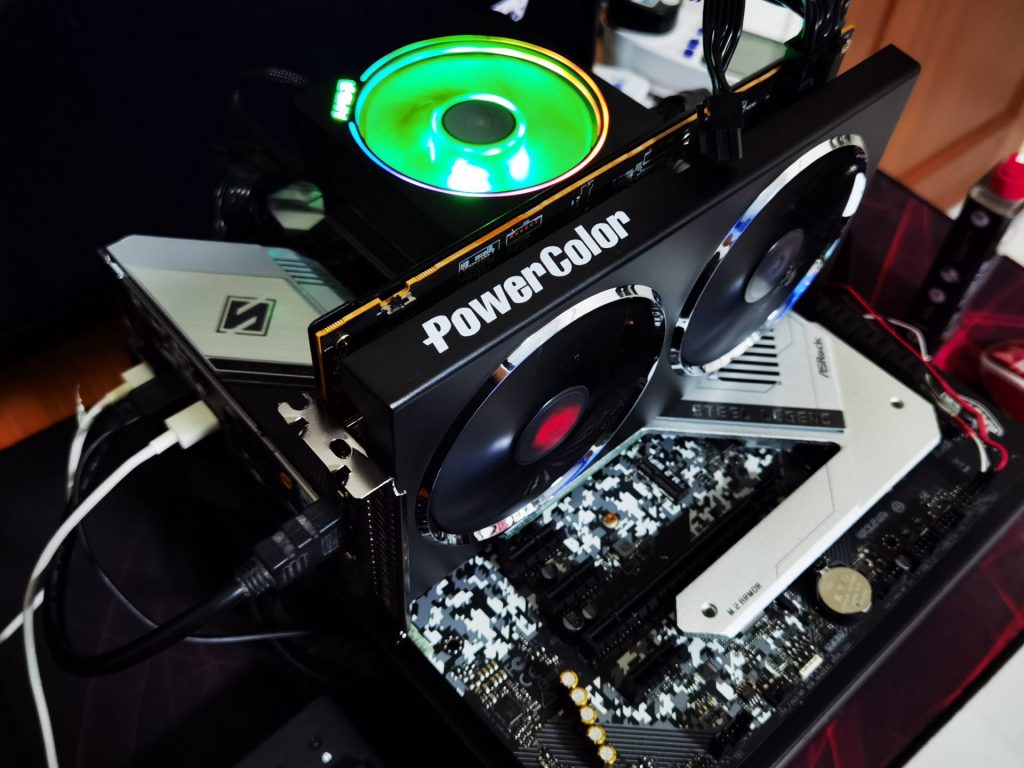 The settings of the benchmark tests are as follows: 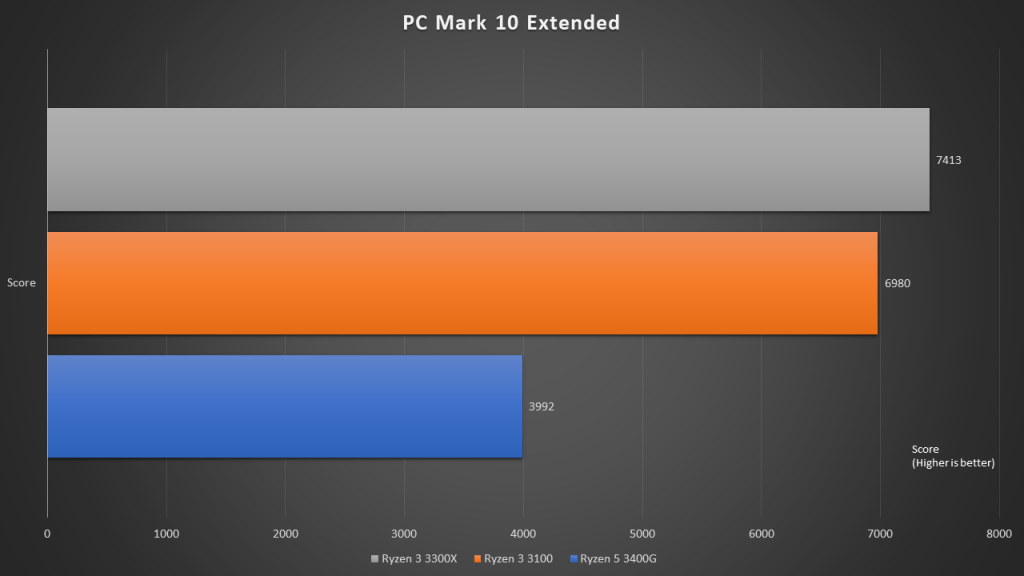 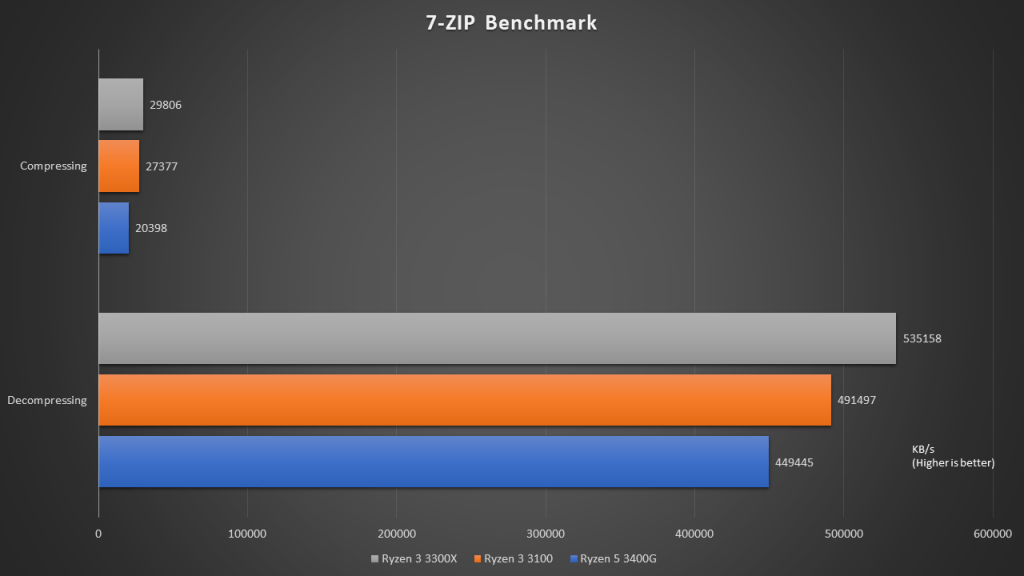 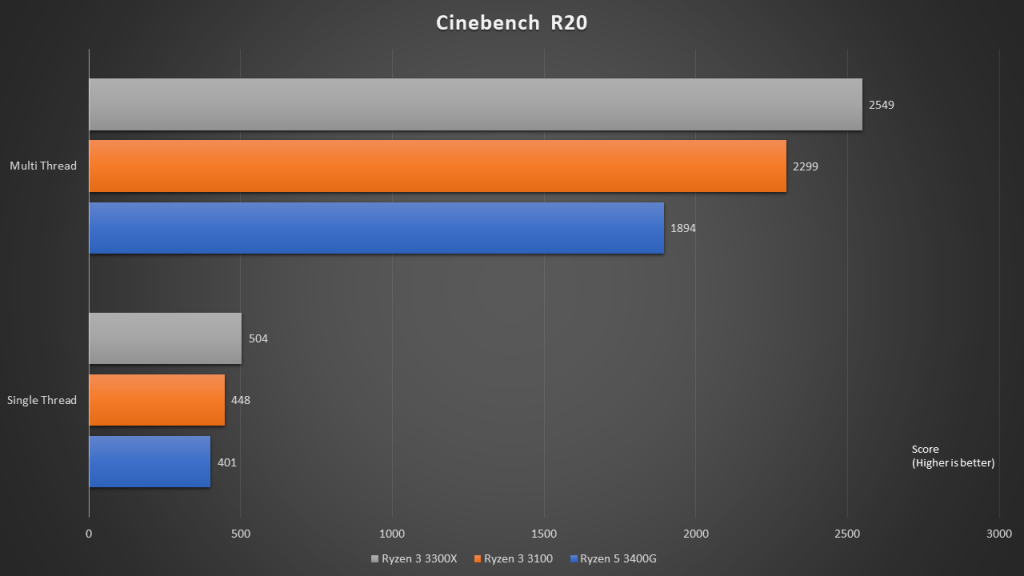 Similar results were seen in the Cinebench R20 test. The Ryzen 3 3300X still came up on top. This time, the performance difference between the Zen2 and Zen+ processors were even more apparent. Also, comparing between the single threaded and multi threaded benchmark scores, we also realised that the 3rd Generation Ryzen processors scaled better with the increase in the number of cores and threads – This means that the ratio of Multi-Threaded Score to Single-Threaded score for the respective CPU was higher for the 3rd Generation Ryzen processors. 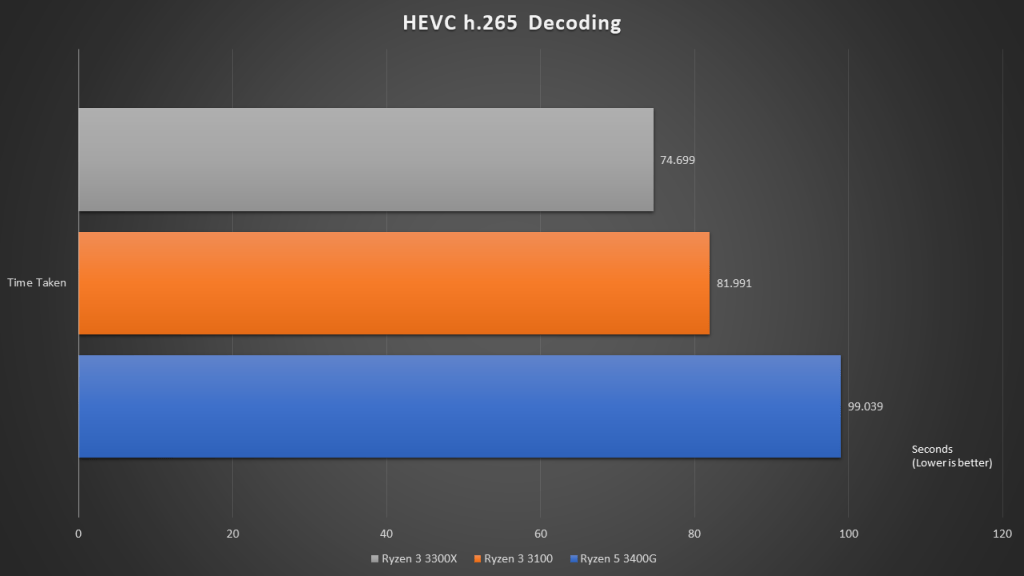 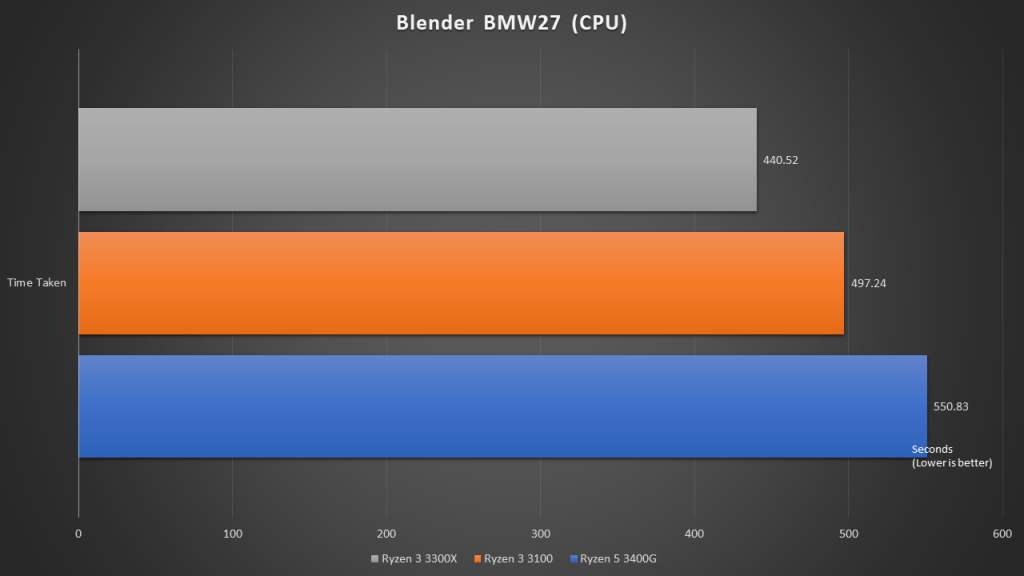 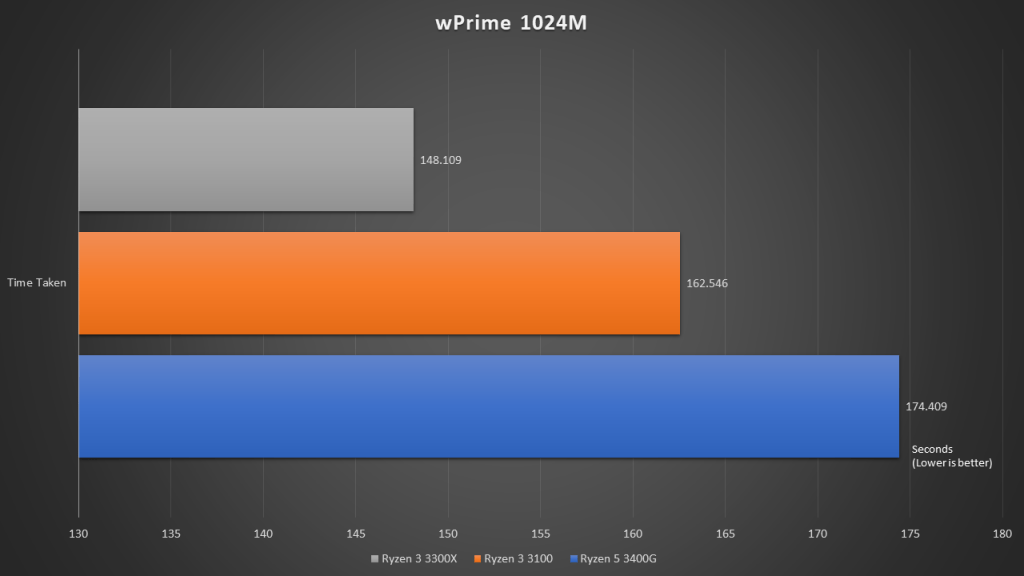 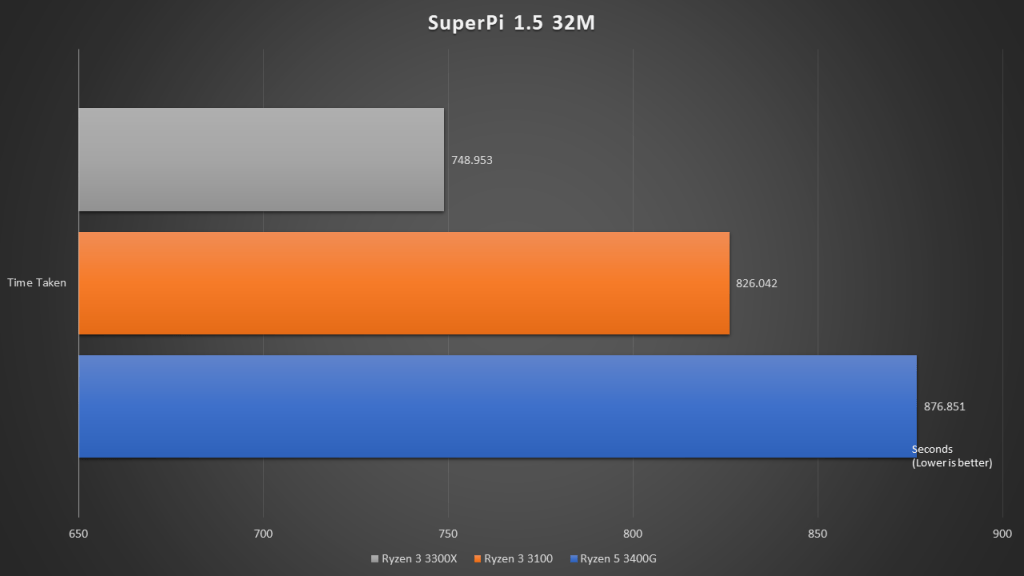 The other tests also showed similar results. There is no doubt that at stock speed, the AMD Ryzen 3 3300X is a great processor. It surpasses the performance of both the Ryzen 3 3100 and Ryzen 5 3400G. Also, we took note that despite the Ryzen 3 3100 was running at a lower frequency than the Ryzen 5 3400G, it had a higher score in all our tests. It really shows the improvements AMD had made to the new Zen2 CPUs over its previous generations. 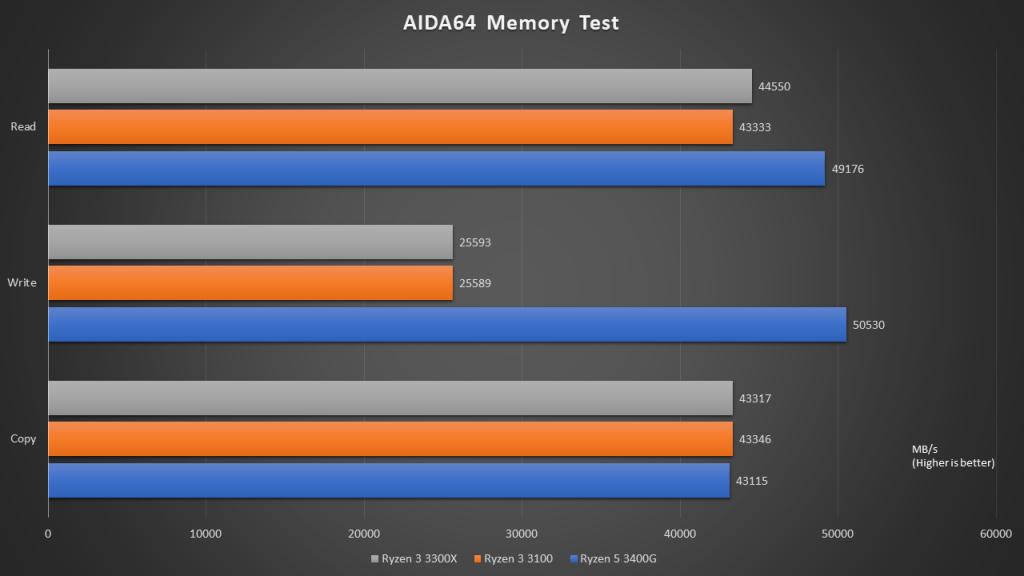 The memory benchmarks had results that showed us otherwise. This time, the Ryzen 5 3400G had the advantage over both the new Ryzen 3 processors. This is because the 3rd Generation Ryzen 3 processors only run on a single CCD(as mentioned above). The link between the CCD and IOD(I/O Die) writes at only 16B/cycle, down from its 32B/cycle in previous generations. This has allowed AMD to save power and area within the package to improve in other more tangible performance.

Since the new 3rd Generation Ryzen processors doubles the available L3 cache to overcome its higher memory latency, performance was not impacted as much. This is because, with the larger L3 cache capacity, there is a lesser need for the system to write to the RAM in the first place. 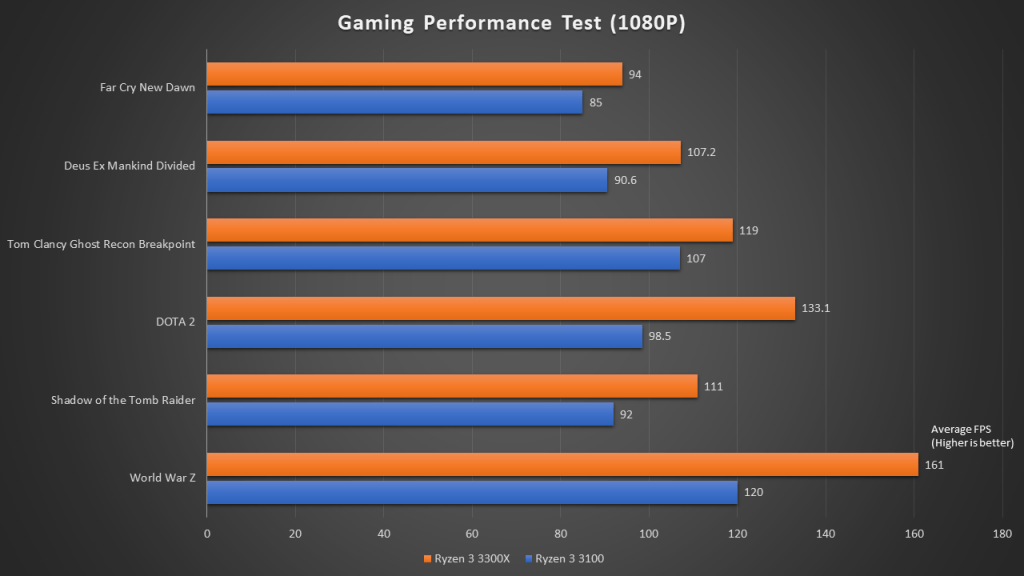 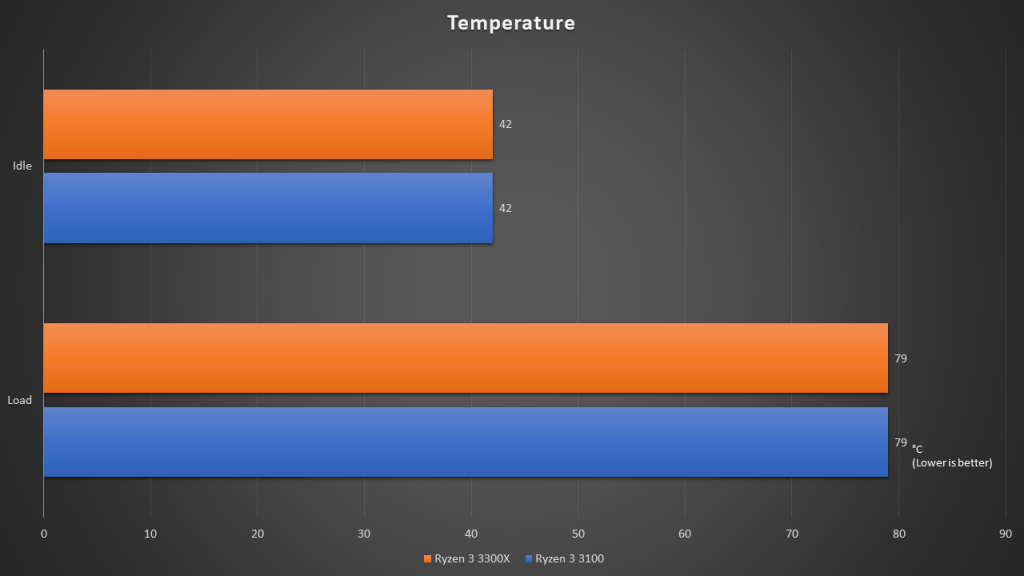 Even though both the Ryzen 3 3300X and Ryzen 3 3100 were clocked at different speeds, they both had similar thermal signatures. Both CPUs were recorded to be at the same temperature levels on load and during idle state. 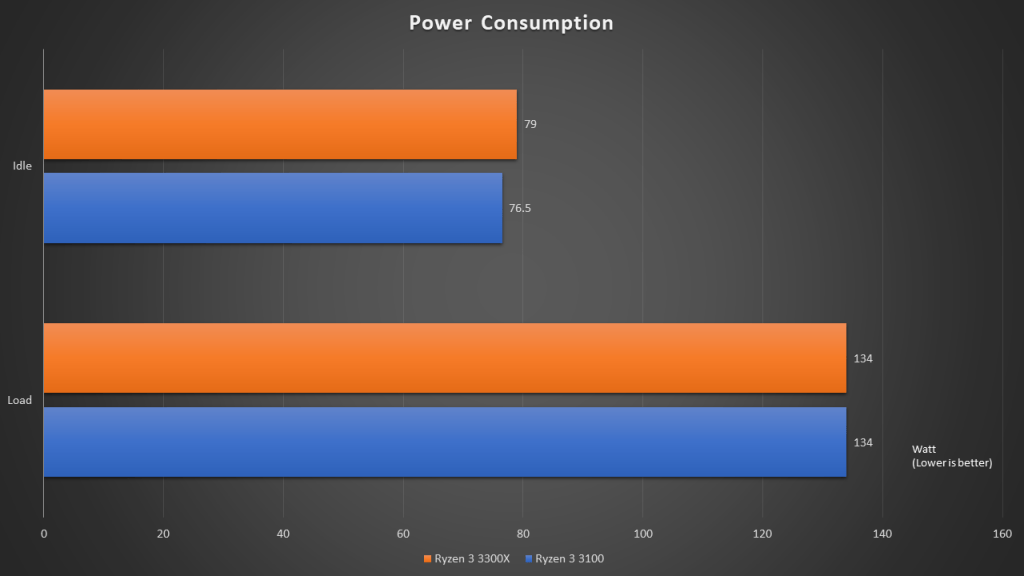 Both CPUs which are rated at 65W also had similar power consumption at both idle and on load situations. 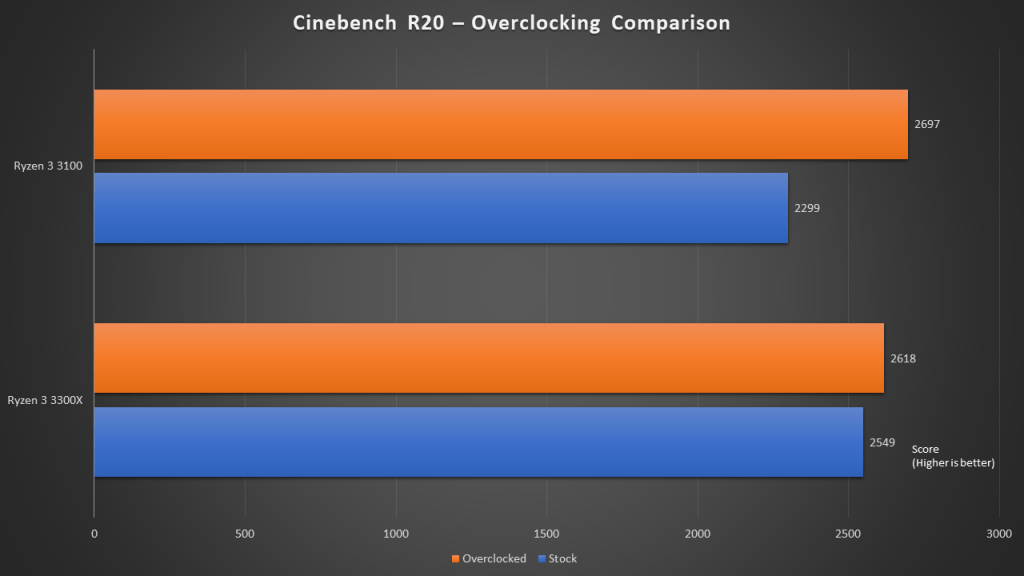 Based on the above sustained clock speeds, the Ryzen 3 3100 had a modest 17% performance increase. The increase of CPU frequency of the Ryzen 3 3300X yield less significance.

Please do take note that every CPU reacts differently when it comes to overclocking. Your mileage may vary.

Based on what we’ve seen in our tests, they are quite the performer. Both CPUs were able to perform very well in all our tests, and is capable to handle any type of workloads handed off to them. 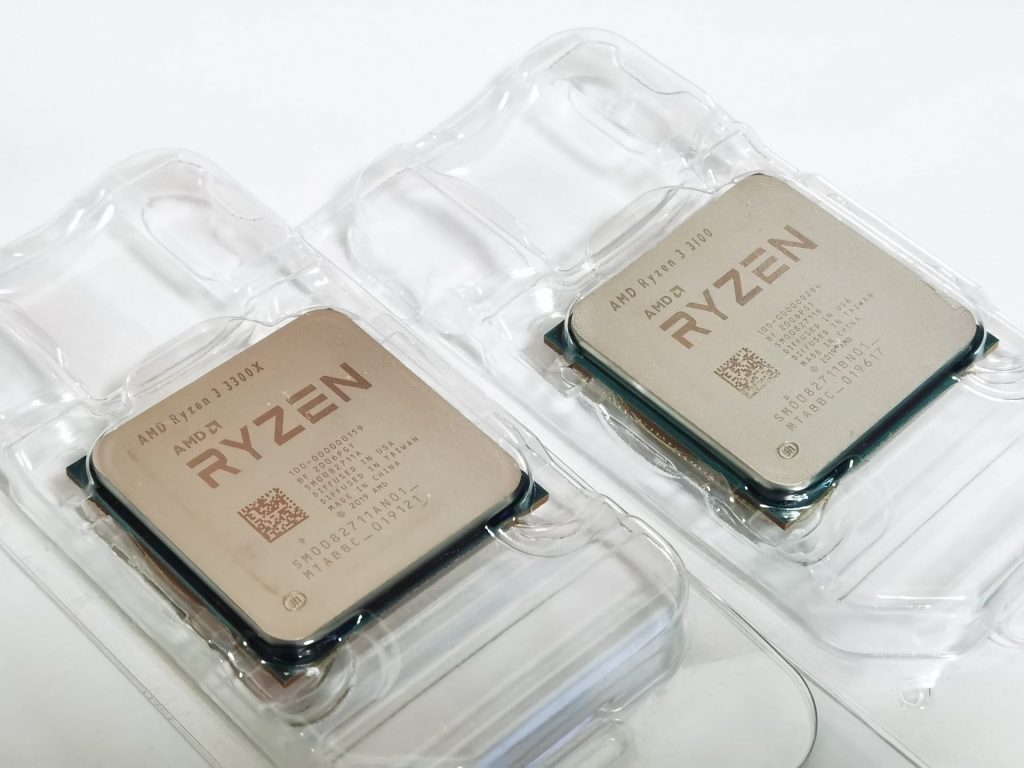 In our opinion, if you are building a new PC for gaming, the Ryzen 3 3300X is the obvious choice. Its higher core frequency allows it to have an advantage to produce higher FPS in games.

Both the Ryzen 3 3300X and Ryzen 3 3100 are compelling entrants to the market. They have just raised the bar of what it means to be an entry-level product. The new 3rd Generation Ryzen 3 processors are obvious choice to new PC builders who want to have someone with a tight budget.

Dell XPS 13 2-in-1 Review - One of the best Convertible Notebooks around?