Intel just released their new 10th Generation H-Series Core mobile processors. Prioritizing performance, these processors are set to change the landscape in mobile computing. On top of that, NVIDIA also announced their flagship GeForce RTX 2070 SUPER and GeForce RTX 2080 SUPER graphics card for notebooks. Bringing these two technologies together, we can truly expect unparalleled experience in compute and gaming.

ASUS Republic of Gamers is at the pinnacle of gaming technology innovation. Of course, with the new Intel and NVIDIA CPU and GPU, ASUS ROG gaming notebooks are set for an upgrade. Let’s take a look at what they have got in store for us. 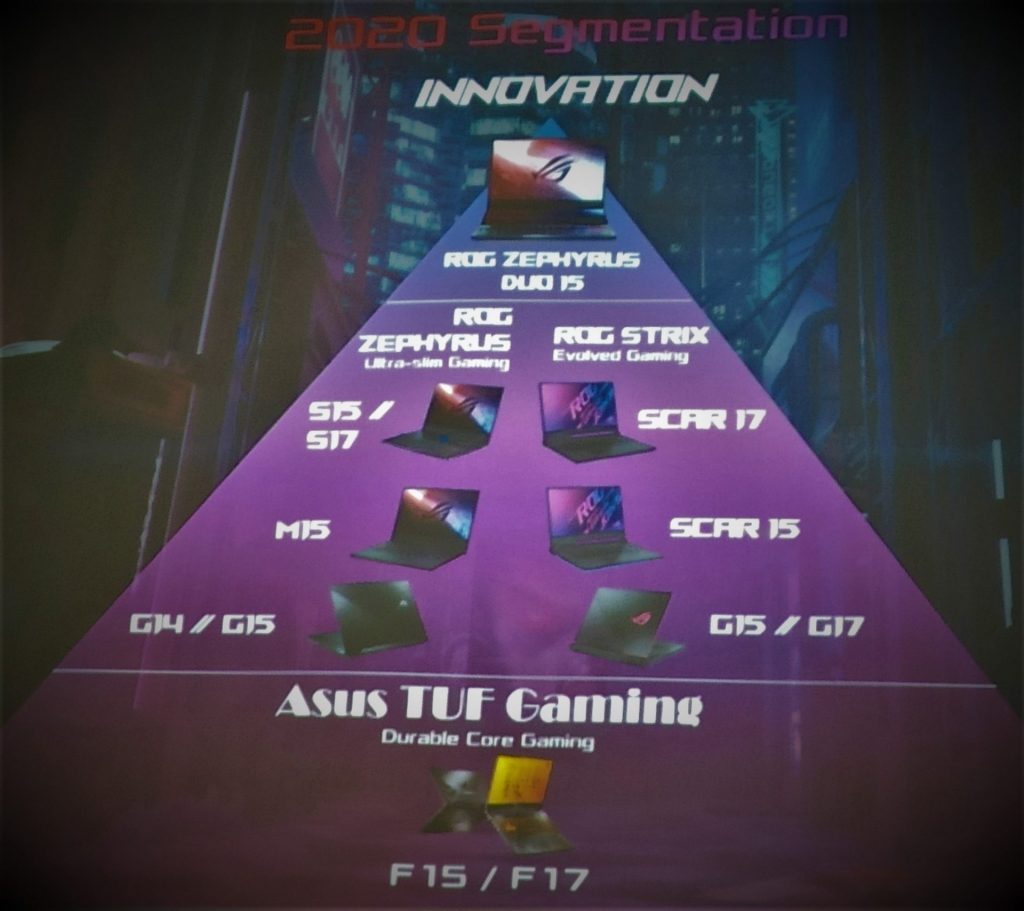 The new ROG notebooks are clearly segmented to meet the needs of users of different profile. At the top of the pyramid, boasting never seen before innovation and technology is the new ROG Zephyrus DUO 15.

Moving down the line, the ROG Zephyrus and ROG STRIX series is there to meet the specialized needs of users. Be it gaming or professional work, there will be suitable system available for selection.

Of course, for those who want a notebook computer that is well equipped with the latest hardware, but don’t have too much money to spare. the ASUS TUF Gaming is one of the most affordable notebooks series out in the market.

The new Zephyrus Pro Duo is the new flagship product from ASUS that builds on from the current innovative technology that’s only available from the company. If you remembered the ASUS ZenBook Pro Duo which we’ve reviewed last year, you will be familiar with the dual screen concept. With an additional screen installed on the notebook, users can be more productive by placing windows on both sides of the screen.

After listening to feedbacks from users, ASUS has went back to the drawing board and made this design even more usable. By lifting the secondary display on the Zephyrus Pro Duo, users can view content even more easily. Moreover, this design also helps with heat dissipation – the fans are found at the bottom of the secondary display, and exhaust heat is expelled through the space beneath.

We’ve tested the new tilted display design, and found it to be very sturdy, despite it only being supported by two hinges. Do take note that the secondary screen is mechanically tilted while flipping the lid of notebook. There isn’t an option to push the display down while the notebook is open. It’s actually quite sensible, as you can see that the tilted secondary display does not block any part of the main display at all.

If you are looking for something more conventional, the new Zephyrus M15 could be a good choice. This is a notebook that retains a clean and minimal design, even though it’s equipped with the latest high performance components like the Zephyrus Pro Duo. The Zephyrus suits many usage scenarios, be it for productivity work or games.

Finally, users won’t feel out of place when placing a high performance notebook on the meeting room’s desk. The design of the Zephyrus M15 looks professional, and we are sure that many will also find it to have a certain appeal.

While the notebook is designed with a considerably thin and slim profile, ASUS did not compromise on expandability. The ASUS Zephyrus M15 still comes with 3 full sized USB Type A ports, HDMI port and even a Gigabit Ethernet port.

Other than introducing new hardware, ASUS is bringing a new style of design to the Strix G series. The series will be accentuated with pink. Unlike the ROG PNK LTD line of pink ROG peripherals which screams pink, the new Electro Punk Pink colour in the Strix G series notebooks is more conservative. ASUS uses pink highlights as the main contrasting colour to the base metallic black.

The ROG logo, which is usually in red, is now replaced with the new Electro Punk pink. There is also a pink stripe the surrounds the front three sides of the notebook. The WASD and the outline of the trackpad also spots pink accents.

The ROG STRIX G17 comes from the same series as the G15. The main difference is in its display size, as this notebook comes with a 17-inch display. The main talking point from the photos above is the notebook’s unique colour scheme. This STRIX G17 is available in a sophisticated Glacier Blue, which could be a hit or miss with users. The rest of the design elements are largely similar to those found on the G15.