We have first seen the Gigabyte B450 AORUS PRO WIFI Motherboard that is equipped with the latest AMD B450 chipset at COMPUTEX 2018. Last week, we managed to get our hands on the actual unit, and learned more about the different features that sets this motherboard apart. But when it comes to the actual performance of a motherboard, we are going to figure out what actually matters.

In this review, we finally put the Gigabyte B450 AORUS PRO WIFI to the test with our AMD Ryzen 2 2700 CPU. Since we didn’t have the chance to power up the motherboard in the previous articles, we can now take a look at the aesthetics when the RGB lighting comes into play. Next, we will focus our efforts on testing the baseline performance of the system and find out how much further we can push the processor and memory with this motherboard.

Any Motherboard of 2018 can’t go without RGB Lighting

Following the trend of having RGB on everything tech related, the B450 AORUS PRO WIFI also has its fair share of RGB lighting. Thankfully, Gigabyte decided to place RGB LED only at specific areas, thus allowing the motherboard to show off its “natural” beauty as well as the branding of the motherboard. We feel that this amount of lighting on the motherboard is just right. Any more than this, it would be too much.

There are 3 main areas where RGB LEDs are found on the Gigabyte B450 AORUS PRO WIFI.

1. On top of the VRM Heatsink 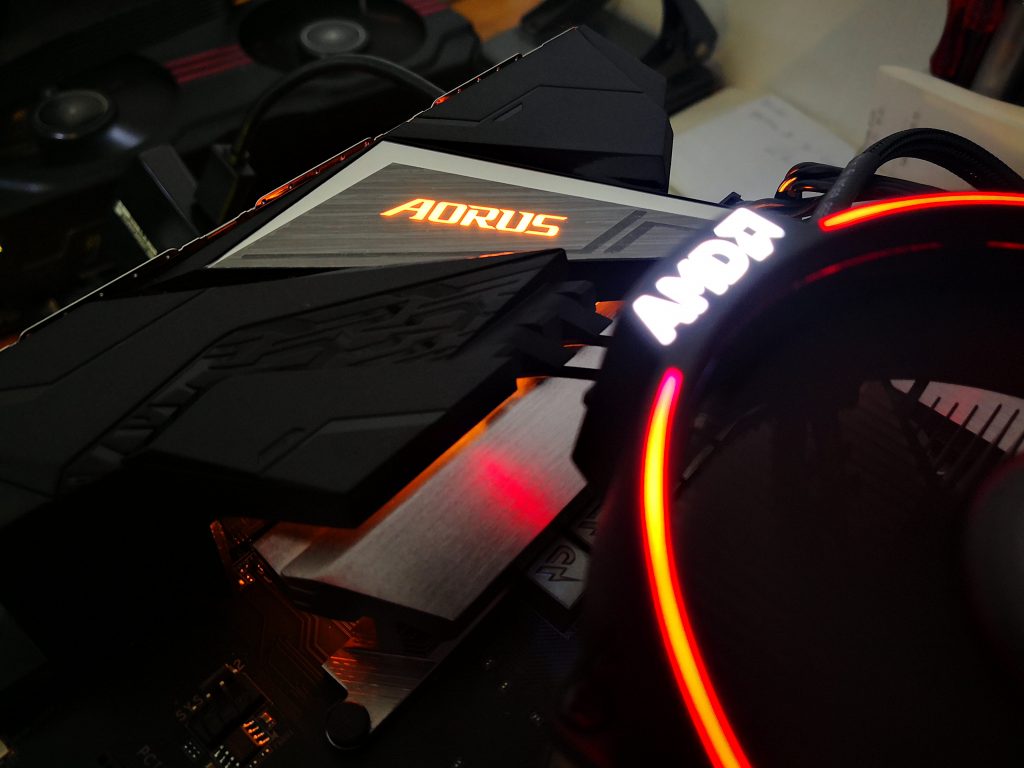 2. On top of the Chipset Heatsink 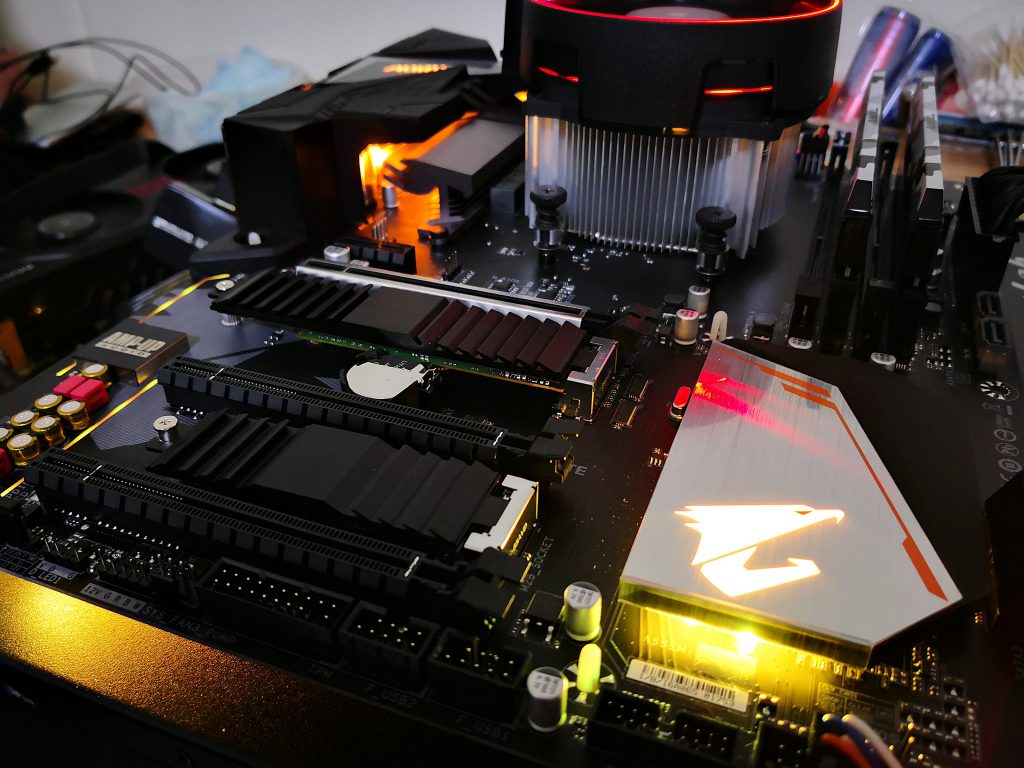 3. LED Trace at the Audio Chipset area and bottom of this area 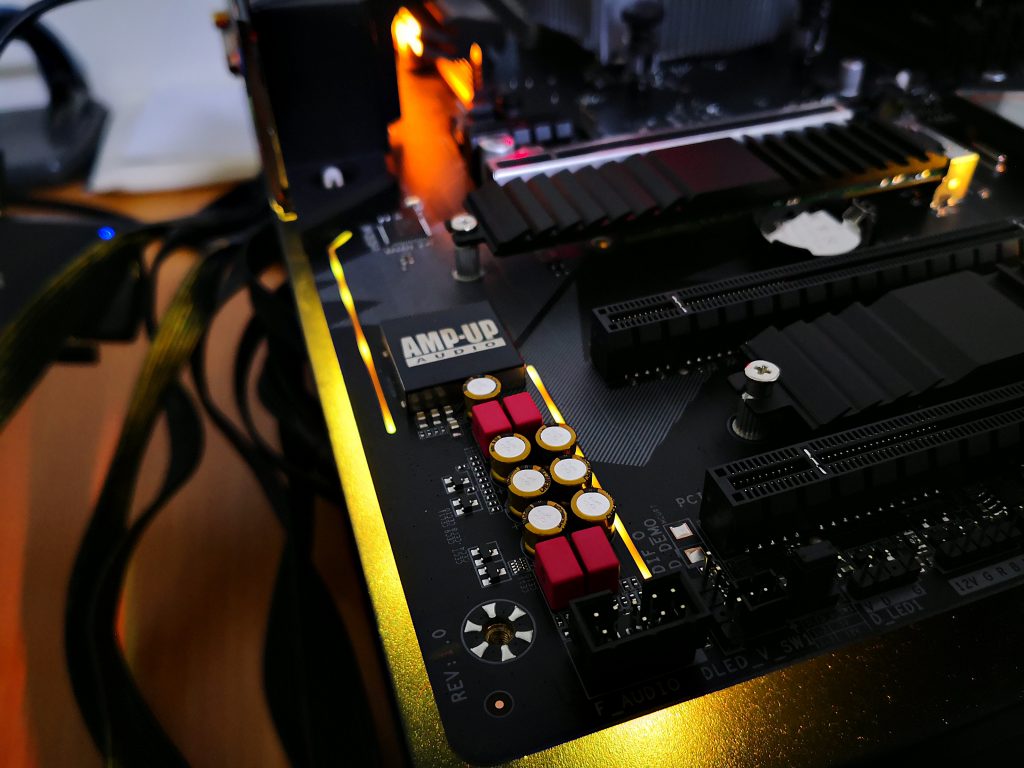 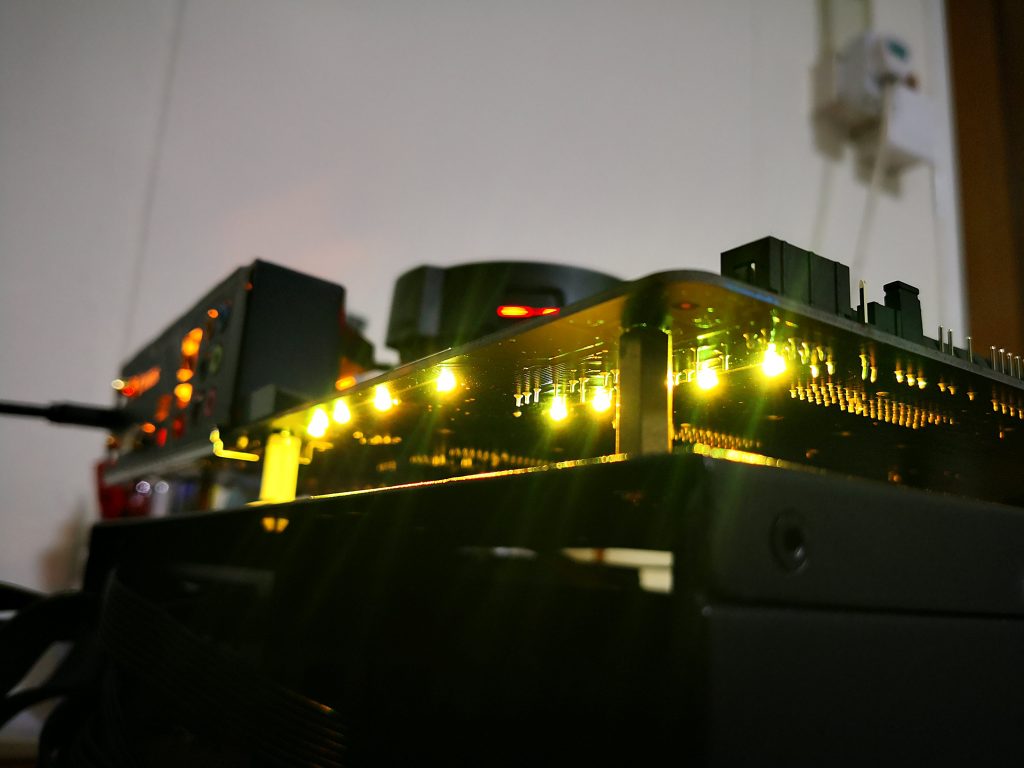 Since there are also some RGB LEDs that are placed at the bottom of the motherboard, the B450 AORUS PRO WIFI should fit well in cases with a black motherboard tray. These LEDs can add a certain background lighting to the whole motherboard, making it the focus within the case.

The colours of the LEDs can also be adjusted directly from the BIOS of the motherboard, while supporting multiple effects and modes. 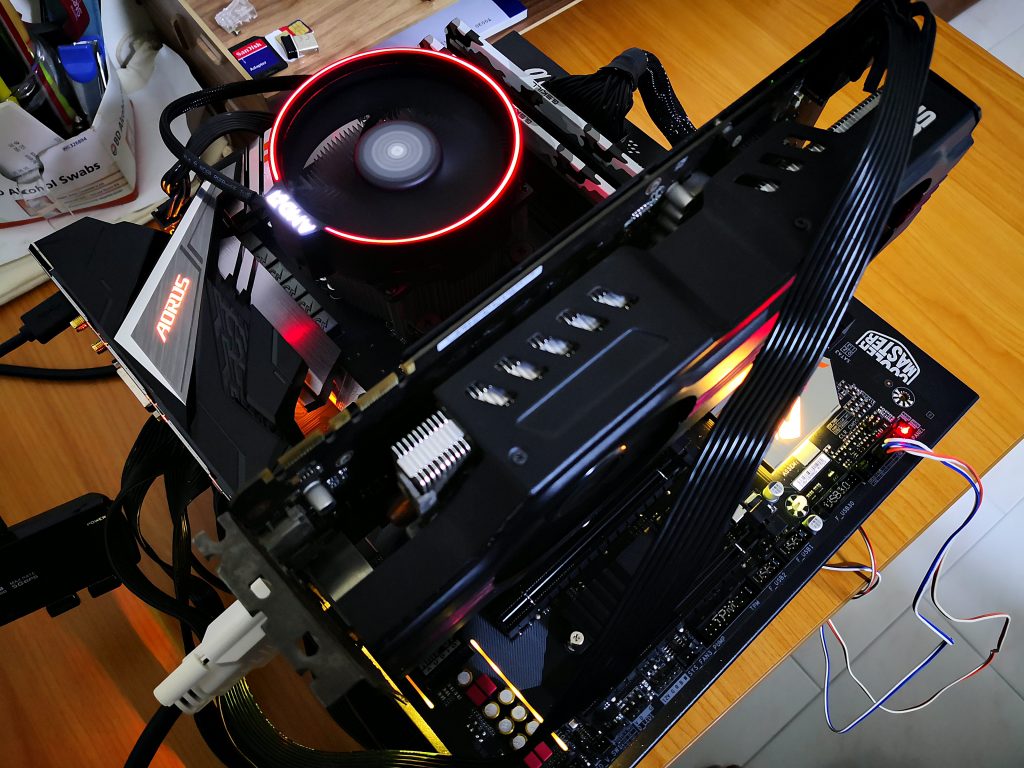 We will focus our efforts on running benchmarks that focuses on CPU performance and memory performance, as these are fundamental to the overall performance of the system. As such, our favourite Cinebench R15 benchmark and AIDA64 memory benchmarks are chosen.  The initial set of tests will be based on the settings above. 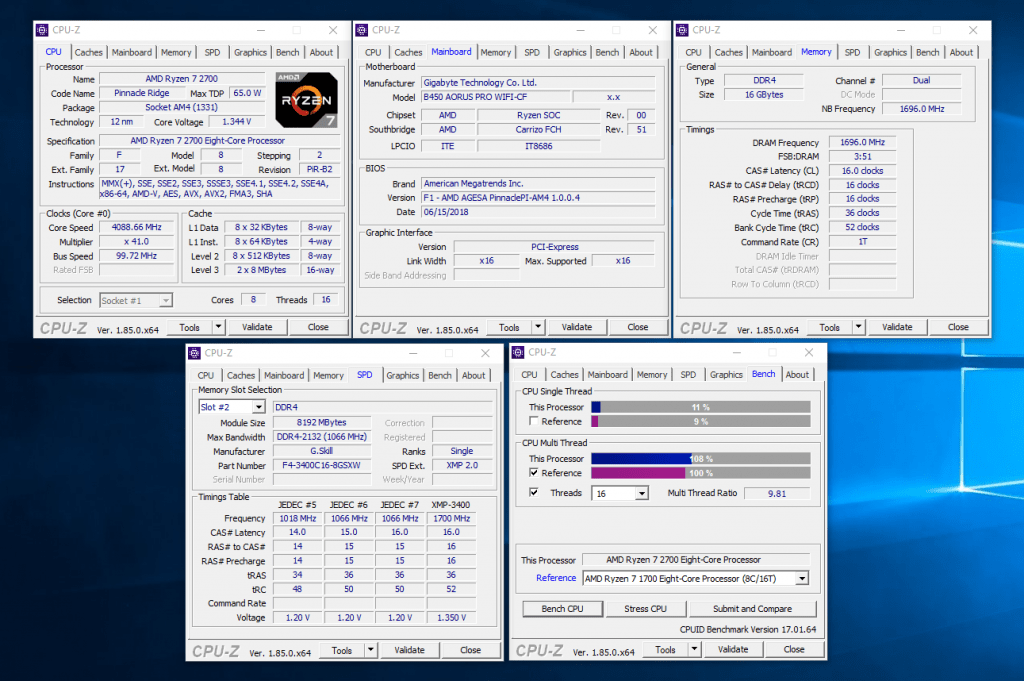 With AMD graciously not locking their processors from overclocking, we were able to easily overclock our Ryzen 7 2700 just by increasing the CPU multiplier. As for memory, we applied the XMP profile to apply the overclock.

Many people may face problems with their initial setup of their system if they intend to have their memory speeds to run at advertised rates. Thankfully, Gigabyte designed their motherboard to improve compatibility with XMP profiles (XMP is actually an Intel technology). In order for us to reach the DDR4 3400 speeds, we had to set the motherboard to accept our RAM’s XMP profile. Then, without any hiccups at all, the system was ready to go! We really appreciated this feature, as it would make it a lot easier for novice system builders to get the expected memory performance from their motherboard.

We also wanted to find out the compute performance we can get just right out from the box. To achieve this, we used the stock cooler for our overclocking efforts. To our surprise, the AMD’s Wraith Coolers performs quite well, and was able to tame the CPU even when all cores are running simultaneously at high clocks. We ended up with a speed of 3.925GHz with the Gigabyte B450 AORUS PRO WIFI.

To be frank, we wished that the Gigabyte B450 AORUS PRO WIFI could have provided more advanced settings to allow for a better overclocked. Even their maximum amount of voltage increase are limited, which resulted in a limit to overclocking capabilities.

The performance gained from overclocking the system memory was extremely significant. Just by setting the XMP profile of the RAM, memory performance increased by about 60%. This really shows that the investment in faster memory for the computer system does make a difference. Just by having the Ryzen 7 2700 run on stock settings, we achieved a score of 1556 points on Cinebench. Do take note that at times, with AMD XFR and Precision Boost technology, the CPU will boost beyond its base speed of 3.2GHz and to up to 4.1GHz. However, not all cores can reach such speeds depending on the thermal capabilities of the CPU cooler. 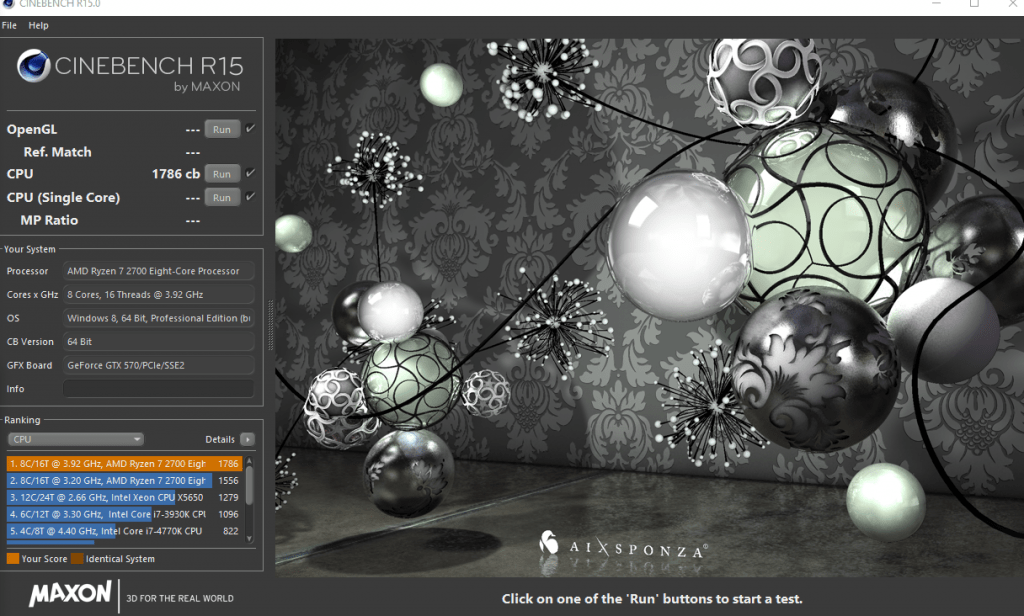 By overclocking the Ryzen 7 2700 to 3.925GHz, we simply had all cores of the CPU to be fixed at this frequency for the benchmark. It was also apparent that the Ryzen 7 2700 was able to scale well with frequency, and that performance increase was definitely seen based on the Cinebench R15 benchmark. In the end, we managed a score of 1786 points. This is about a 15% increase in CPU performance.

The Gigabyte B450 AORUS PRO WIFI will be well-liked by many system builders because it is made to be simple. Allow me to clarify:

However, we would have much preferred it if Gigabyte allowed an additional toggle that opens up even more configurations for CPU overclocking. As a more advanced user, I wished that discrete settings on voltages and base clocks can be made available as well. Get free drinks if you use Ez-Link cards at Taman Jurong Food Centre!