Sharp Announces
Release of AQUOS 8K in Japan, China, Taiwan, and Europe
World’s First(1) 8K-Compatible TVs and
Displays Bring On-Screen Reality Closer Than Ever
TOKYO,
Aug 31, 2017 – (JCN Newswire) – Sharp Corporation announces the release of the
AQUOS 8K Series of 8K-compatible TVs and displays, a world first(1). Positioned
as the core of the 8K Ecosystem, Sharp’s key medium-term strategy, these
products will be released in China in October, in Japan in December, in Taiwan
in February 2018, and in Europe in March 2018.8K is a revolutionary technology for
ultra-high-definition images with 16 times the resolution of full-HD which
could not be expressed with 4K images. It reproduces images at ultimate
reality, with ultra-fine details even the naked eye cannot capture. Apart from
displaying TV broadcasts and other media contents, 8K will dramatically impact
many aspects of our lives: medicine, business, security, signage etc.

Sharp has been leading the industry by releasing
8K-related products in Japan. In October 2015, the company released an 85-inch
8K monitor using an 8K LCD panel, and the advanced wideband digital satellite
broadcast receiver compatible with 8K ultra-high-definition (UHD) broadcasts in
2016, followed in June 2017 with the release of a 70-inch 8K monitor.

Sharp is also complementing its 8K TVs by
accelerating development of 8K broadcast receivers, 8K cameras, and other 8K
products to lead the world by establishing an 8K Ecosystem. 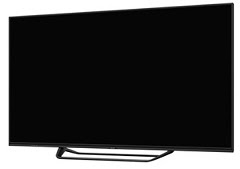 Sharp Corporation (TSE: 6753) is a worldwide
developer of innovative products and core technologies that play a key role in
shaping the future of electronics. As a leader in liquid crystal displays
(LCDs) and digital technologies, Sharp offers one of the broadest and most
advanced lines of consumer electronics, information products and electronic
components, while also creating new network businesses. For more information,
please visitwww.sharp.co.jp