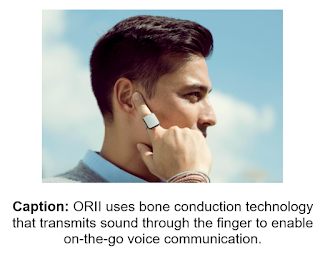 Revolutionising the
wearable technology
market is the world’s first voice-powered smart ring called ORII.
Launching on Kickstarter at 8pm (EST) today, the ring turns the hand into a
smartphone using cutting-edge bone conduction technology to transmit
sound. Users can make calls, send messages, or command a voice assistant, such
as Siri or Google Assistant, by simply placing their fingertip to their
ear. Founded by four Hong Kong-born university friends, the
technology start-up is redefining how users interact with their
smartphones, marking a notable shift away from a screen-based world.
The wearable technology market
forecasts robust
growth as
consumers seek for easier, more functional and stylish ways to unlock the capabilities of their
smartphones. According to a CCS Insight report, 2020 will see the market worth
close to USD 34 billion. Taking connectivity to the next level, ORII represents a move
towards voice based wearables that let users seamlessly communicate with their
phones and intelligent voice assistants..
According to ORII CEO Kevin Johan
Wong, ORII is designed to make lives simpler yet simultaneously more productive
in an age where consumers are tied to their screens.
“Designed to become an
integral part of your life, ORII paves the way for a more screen-free lifestyle
while giving you instant on-the-go connection to your smart devices. Our
inspiration came from my dad who has been visually impaired from a young age.
He set out to develop voice and text-based technology to help others like him
and is a pioneer in his field with eight patents under his name. Integrating the
same technology used in hearing aids, ORII uses bone conduction to send sound
discreetly to your ear, creating a device which allows freedom from
screen-based interaction.”
Recognised by Hong Kong
Business Magazine as one of Hong Kong’s top 10 Hottest Startups in 2017, ORII
represents the city’s rising talented generation of innovators, signaling the
next wave of unique hardware products coming out of Asia for a global audience.
How does ORII work?
●
Bone
conduction: used
in medical-grade hearing devices, ORII’s bone conduction technology delivers
clear audio with complete privacy by sending sound vibrations through the
finger and directly into the wearer’s ear.
●
Enabled
by Siri/Google Assistant: ORII
has dual noise cancelling microphones that lets wearers make calls, send
messages and access Siri or Google Assistant without needing to take out their
phones.
●
Built
for everyday life: ORII’s
sleek ring design is engineered to be comfortably worn on the hand all day for
instant access to Siri or Google Assistant, and seamless on-the-go
connectivity.
‘Congratulations
to Origami Labs team on the success launch of ORII Ring. Seeing our
start-ups achieving each milestone along their entrepreneurial journey is the
greatest return to Cyberport’s efforts in igniting innovation and nurturing
digital tech entrepreneurs. We are happy to witness the development of ORII
Ring, which is a true demonstration of how technology is bringing a positive
impact to our lives.’ Herman Lam, CEO of Cyberport. 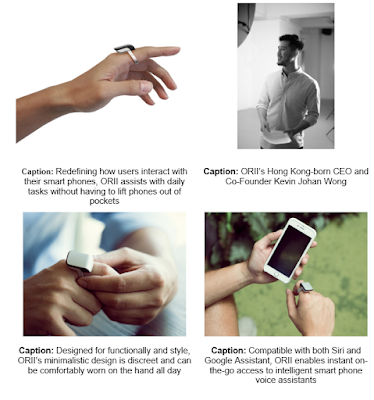 About ORII
ORII has been developed
by Origami Labs, a maker of connected devices that uses creatively applied
technology to improve daily life. Taking inspiration from accessibility design,
Origami Labs builds voice-enabled hardware to transform the way consumers
communicate with today’s electronic and smart devices. ORII is company’s first
product, the world’s first voice-powered smart ring that uses bone conduction
technology to turn the finger into a smartphone. By connecting to an iOS or
Android smartphone via Bluetooth, ORII enables instant on-the-go access to intelligent
voice assistants such as Siri or Google Assistant. Users can take calls, send
and receive messages or add an event to their calendars without touching their
phone. With the ORII app, users can set custom alerts using LED lights and
vibrations.
Origami Labs was founded
by four Hong Kong University of Science and Technology MBA students in November
2015. Kevin Johan Wong, CEO and Co-Founder of Origami Labs, leads the team’s
innovation, investor outreach and R&D. Having grown up with a visually impaired
father who devoted his career to voice and text-based technology, Kevin was
inspired to develop the world’s first voice-powered smart ring for a
screen-free lifestyle.
Connect
with ORII:
Website:         http://orii.io/
Facebook:
https://www.facebook.com/ORiiOfficial
Instagram:
https://www.instagram.com/oriiofficial/
Twitter:
https://twitter.com/oriiofficial
shortened this
Think the black & white one is
better

Neural Coding Your Business: How Analytics Can Guide You to Sell Better