The Samsung Galaxy S8 was unveiled
at the Samsung UNPACKED event held in New York today. Samsung has effectively
positioned their flagship smartphone to redefine the whole idea of what a
smartphone is all about. Equipped with the latest and greatest Qualcomm
Snapdragon 835 SoC, the new flagship is poised to outperform any competition in
the market. As expected, Samsung is the first manufacture to bring an actual
smartphone with the Snapdragon 835 into the market.
As compared to the previous
Qualcomm Snapdragon 821, the Snapdragon 835 features many improvements.
Specifically, the Snapdragon 835 is designed with Virtual Reality in mind. It
is the first ever mobile chipset that is fabricated on the 10nm process node.
This essentially means better performance at a lower electrical consumption.
With this improvement, the mobile chipset is geared much better improvements.
In fact, the Snapdragon 835 is developed by Qualcomm in collaboration with
Samsung. We can also expect much optimized performance from the chip on the
Samsung Galaxy S8.
*The Samsung Galaxy S8 and S8+ are available in both Samsung Exynos 8895 and Snapdragon 835 processors. The smartphones are configured with different processors for different regional markets. 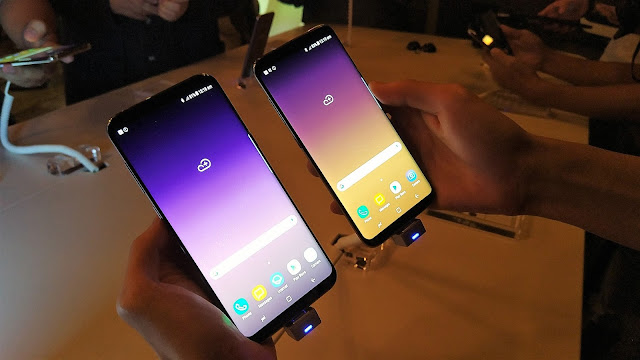 ·
CPU Performance
The
Snapdragon 835 chipset holds a Octa-Core processor. More specifically, 4 of
these cores runs at 2.45GHz for workload with higher computational
requirements, while the other 4 runs at 1.9GHz for better efficiency. This is
greatly improved from the previous quad core configuration of 2 x 2.35GHz / 2 x
1.6GHz.
·
Graphics Performance
The
Snapdragon 835 package comes with an upgraded Adreno 540 GPU. This new GPU has
been upgraded to support the latest OpenGL ES 3.2 API. Generally, the GPU is also
pumped to reach better graphics performance. This means better gaming
performance and smoother graphics.
·
LTE X16
With
the new LTE x16 modem, smartphones can be connected to their 4G LTE network and
enjoy up to speeds of 1Gbps. While you may not know, such cellular network
capabilities are already under the trial in Singapore, and will subsequently be
rolled out to the rest of the country.
·
Bluetooth 5
The
Bluetooth 5 technology is the next generation low power wireless connectivity
for devices. As compared to Bluetooth 4.2, Bluetooth 5 is faster, has longer
range, and can transfer more information. This hardware also prepares the
Samsung Galaxy S8 and S8+ with IoT devices as well.
·
·
Quick Charge 4.0
Qualcomm
says: Five minutes of charging for give hours of battery life. The new Quick
Charge 4 not only charges faster than previous quick charge methods, but it is
also designed to let charging run cooler and more efficiently. As compared to
Quick Charge 3.0, it is 20% faster.

GeForce GTX 1060 added to the "Prepare for Battle" bundle