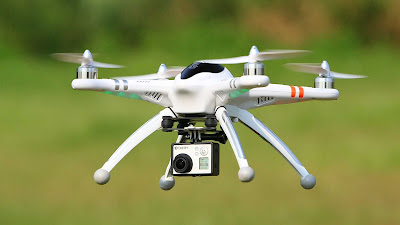 Just
when many investors are running for the exit, having burnt their
fingers with toy drones and the like, IDTechEx reveals a much bigger
picture with considerable potential for the level-headed. The new IDTechEx report, Electric UAV Drones: Autonomous, Energy Independent 2017-2027
invites us to consider the trends to larger drones increasingly with
autonomy of navigation, task and energy. This confers with further
benefits in aspects such as such as:
Autonomy of navigation, task and power are the end game: These leverage
each other. Drones are overcoming problems of direct human involvement
in dirty, dangerous, boring, slow and imprecise operations that need to
be done better and they will even be used for currently impossible
tasks. IDTechEx forecasted the price collapse of toy versions but we reveal the huge opportunities in specialist hardware and most software and services elsewhere.
Drones
of all sizes are receiving billions of dollars of investment, notably
directed towards military small ones that will swarm and large ones
doing surveillance and communications from the upper atmosphere.
Facebook has something similar that will deliver the internet.
Multi-billion dollar markets in hardware and services are emerging. Electric UAV Drones: Autonomous, Energy Independent 2017-2027 is an exciting read because it contains so much that is rarely or never reported elsewhere. For example TwingTec
autonomous tethered drones generate 100kW of electricity and several
others hover for weeks doing surveillance thanks to a power cable down
to ground.
The report
finds that swarming theory and endowment of curiosity will transform
security and other applications. For instance small drones will
investigate intrusions into secure areas such as ports and collaborate
to investigate and control the situation. Virtually all civilian drones
are electric but the minority of military ones that are electric is
increasing now swarming drones are being launched from aircraft and
other options investigated.
It
is the only report encompassing all of this, based on new research
worldwide carried out by multilingual PhD level analysts. For those
wanting even more on specifics, there are related reports on robotics,
electric vehicles, agribots and so on and all IDTechEx reports have 30
minutes of free consultancy attached.
The report presents densely packed but easily understood Powerpoint infograms,
forecasts and roadmaps involving over 400 players with the most
significant work identified using a profusion of images. There is an
executive summary with the technology and evolving uses crisply
explained followed by comparison of players, market forecasts and
roadmaps. The
market forecasts are for six drone categories and encompass numbers,
prices and market values. Forecasts by others are presented for
comparison.
The
introduction chapter looks at definitions and briefly introduces key
aspects that are more fully analysed in the subsequent chapters on
applications, possibilities and next technologies. Electric UAV Drones: Autonomous, Energy Independent 2017-2027
does not have the madcap enthusiasm that mars so many other
publications. It records the collapse of the toy market, Alphabet
(Google) abandoning its Titan upper atmosphere solar drone, the $517
billion Northrop Grumman solar powered, autonomous surveillance airship
being cancelled and the commoditisation of simple drones for photography. IDTechEx then
forecasts disillusion setting in with postal delivery by drone in dense
urban environments, giving reasons. On the other hand the report
reveals many gaps in the markets that are opening up including several
technologies and applications not reported in any other drone
publications.
Because
IDTechEx has carried out deep research on allied subjects such as
autonomous, energy independent and electric vehicles in general and new
sensor technology, this report benchmarks relevant things going on
outside the drone business. It avoids the tunnel vision of other
commentators. Learn where there are better alternatives for some drone
applications but huge opportunities for others soon to be trialled, such
as autonomous, helium-filled aerofoils carrying heavy freight across
continents and postal drones demonstrated in remote areas that avoid
most of the problems by dropping parcels not landing. How will we get
the necessary ultra-efficient powertrains? What is the route to new
regeneration creating on-board electricity instead of wasted heat and
movement? How do we make viable the new forms of energy harvesting of
ambient energy such as sun and wind? It is all here. The report ends with examples of insightful interviews recently carried out across the world.
For more see www.IDTechEx.com/drones.