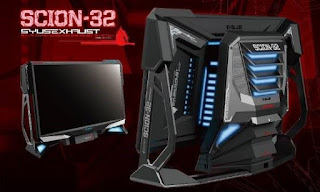 Las
Vegas, United States – 2017 January remarks a milestone to E-BLUE who
unveils two extraordinary products at Consumer Electronic Show (CES) at
Las Vegas, defining the new perspective of gaming reality. The new
launched products have successfully hit the eSports industry while
exceeding everyone’s expectation including PC and gaming developers, as
well as gamers.
With years of R&D effort, E-BLUE proudly presents the world’s first Hybrid-Tower Monitor, SCION-32
to public. This revolutionary all-in-one masterpiece unifies the
mainframe computer with HD monitor, unleashing limitless gaming
experience. SCION-32 is a custom-built station, users can flexibly build
in their favorite PC components to enhance the performance. It supports
Micro-ATX and Mini-ATX, highly compatible with most of the display
cards while preserving sufficient ports for multiple devices and USB
connection. It builds with two hard disk slots, one for HD and the other
for SSD.
To
ensure superb heat dissipation, SCION-32 is well-equipped with a 3D
air-piping system and double silent fans of 1500RPM, air is ventilated
like no others, providing gamers the coolest performance in the
battlefield. 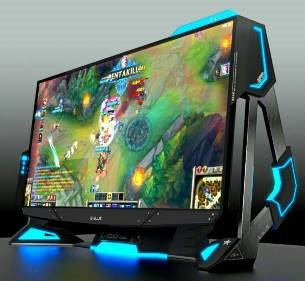 While
the 32” HD monitor (2K, 2560×1440) would absolutely take your breath
away, the panoramic view is as incredible as the mega screen in theater,
gamers would just intensely immerse into the fictitious world. The
monitor can be flexibly adjusted to any angle, thanks to the highly
durable damper bearing which can stand for 50K abrasion resistance. LED
illumination on the sides further stimulates the cybernetic mood.
How
does this hybrid of monitor and PC case would look like in addition to
all the remarkable features? Visitors of CES described SCION-32 gets
“the most chic, futuristic and coolest outlook” that they have never
seen in other PCs before. Yes, innovative design is always the core
competence of E-BLUE that wins the hearts of its fans. SCION-32 bears an
imaginative design that put into reality, more than an epic, SCION-32
rewrites the history of PC.
”SCION-32
is an outcome of creativity, innovation, inspired craftsmanship,
meticulous details, passion and tremendous R&D effort, it represents
a revolution. We at E-BLUE do not want something ordinary, we are keen
on breaking the boundary and revolutionize the typical PC format that
would uplift the user experience and industry’s standard. This is the
reason why we are here”, said by Mr. Jason Lo, Managing Director of
E-BLUE.
SCION-32
will be firstly available in US in first quarter of 2017 and will be
expanded to global markets subsequently. It will be the most hero
product among the brand’s gaming line. 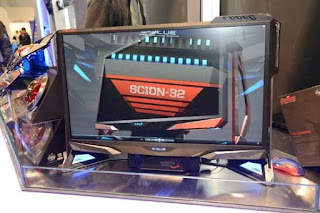 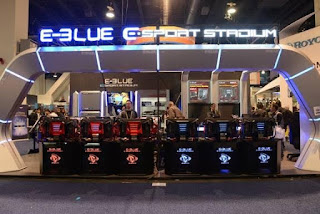 Another
big fascination at CES is the paradigm of E-Sport Stadium setting up at
the exhibition hall, which is the flagship project of E-BLUE that
seduced thousands of guests coming to experience and discussing about
collaboration. E-BLUE E-Sport Stadium is a ground-breaking
concept that chains up gamers, stadium owners, game publishers, sponsors
and advertisers in one platform. With the ambition to uplift users’
experience in eSports world, the brand takes a big stride transforming
traditional cyber café business into high-standard eSports stadium, and
the good news is, everyone can own their stadium too! As E-BLUE has
formulated a successful system to replicate E-Sports Stadium across
different countries. The concept was launched in late 2015, since then
there are over 200 stadiums opened in US, Asia, Europe and Middle East,
more stadiums are confirmed opening in 2017.
“The
E-Sport Stadium concept is an extremely brand-new concept in US, we
look for business partners to open stadiums in their cities and chains
them up. All stadiums are constructed with standard design idea, from
decoration, fixture to peripherals, they are using E-BLUE products. As
our product lines are extensive, we are able to cover almost every stuff
inside a stadium. Business partners are amazed by the fast installation
time while the effect is unexpectedly futuristic and cozy. We received
feedback that many gamers not only game at home anymore, indeed they
stay long in the stadium that helps generate more business, because they
cannot find gaming environment like here, they love gaming together
with their peers and combat against other teams or simply come for
training.
We
have expertise, experience and core competences which are undoubtedly
the first in the market, while providing abundant resources to support
the stadium owners, yet they can enjoy high degree of management
flexibility and a faster capital return. Next, we are looking ahead to
organize E-BLUE tournaments locally and nationally, as well as putting
up our own eSports team. We have been sponsoring many teams and
tournaments internationally, there are many excellent gamers out there,
we think perhaps it is the right time to run our own team that can
represent E-BLUE”, as said by Mr. Gary Lo, Sales Director of E-BLUE, US
Headquarter.
Change
the way you game – is the spirit of E-BLUE, it is determined to
creating opportunities and worthy value to all the stakeholders in the
eSports industry, it keeps its promises to uplift the whole industry and
thrive together. CES is the best platform to endorse the brand’s
conviction and direction setting the trend.
About E-BLUE
E-BLUE
has been founded in Hong Kong since 1995, with 21 years of experience
innovating and manufacturing PC and gaming peripherals, including mouse,
keyboards, headsets, gaming chairs and storage media. E-BLUE has
developed a remarkable branding that dominates the market and wins
massive followers around the globe, due to its unbeatable design,
professionally made, superior quality and surely its unstoppable
innovative spirit. It has a strong global presence, its products are
marketed over 87 countries across USA, Europe, China, South East Asia,
Middle East and Africa etc. Its
close partnership with MARVEL since 2013, the renowned comic publisher,
for the Ironman and Marvel collection have rocked the market and
further made the brand well known globally.
Website: http://www.e-bluegaming.com/
Facebook:    https://www.facebook.com/eblueinternational/ https://www.facebook.com/EBlueESport/
Instagram:       #ebluegaming