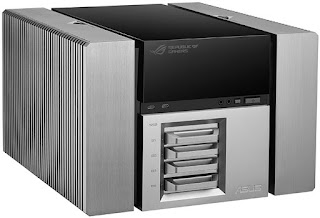 Unveiled
today for the first time was ROG Avalon, a proof-of-concept build that
envisions the future of gaming PCs beyond the standard form-factors. Product
revealed includes Rampage V Edition 10, a celebratory refresh of ROG’s flagship
gaming motherboard, and G31 and GX800 — respectively the world’s
most-powerful compact gaming desktop and gaming laptop. Also shown for the
first time were Swift PG248Q, a super-narrow-bezel gaming monitor with an
overclockable 180Hz refresh rate, the Centurion gaming headset that delivers true
7.1-channel surround sound, and XG Station 2, an innovative external
graphics dock.
Strix was
also introduced as the newest recruit to Join the Republic, with ROG Strix GeForce®
GTX 1080 revealed as the first gaming graphics card to carry the ROG Strix
branding. Commenting on ROG’s decade at the top, ASUS Chairman Jonney Shih,
said: “I’m incredibly proud of ROG’s achievements over its first 10 years, and
today’s announcement demonstrates that our commitment to extreme performance
and gaming superiority is undiminished. I guarantee that ROG’s second decade
will be every bit as exhilarating. Today is a celebration of our success — and proofs
that ROG’s epic innovation and dominance continues at full strength.”
“Intel
and ASUS have been working together for nearly three decades to deliver premium
computing experiences, and for the last ten years we have been proud to power
amazing Republic of Gamer desktops and laptops,” said Gregory Bryant, Corporate
Vice President and General Manager, Connected Home and Commercial Client Group,
Intel. “As gaming continues to grow, Intel is excited to deliver the power and
performance to help push innovation forward for amazing new experiences.”
ROG Avalon: The prototype motherboard/chassis
hybrid for enhanced DIY
experiences
To
celebrate ROG’s 10 glorious years of pioneering motherboard design, we
have dedicated ourselves to raising the bar — with ROG Avalon. This is the first step to our vision of the future of
DIY, built around an all-new motherboard and chassis design. By rethinking the limits of the ATX form-factor and
redesigning the motherboard and case as a single entity, rather than as two
items in tandem, we were able to optimize the layout to alleviate the most
frustrating parts of the DIY process. Avalon features SSD, PSU and graphics-adapter
boards for plug-and-play simplicity without messy cabling, and simultaneously
brings each component to the forefront for easy access. Avalon’s Z170 chipset-based motherboard
also comes with a modular rear I/O for customized connectivity options to fit
every need. Join us and Avalon to forge a better future for PC gamers.
ROG Rampage V Edition 10: Extreme-performance gaming
motherboard
Rampage
V Edition 10
is a celebratory refresh of ROG’s flagship extreme-performance motherboard
designed to let gamers break every limit. Based on the Intel® X99
chipset for the new Intel® Core™ i7 processor family for
socket LGA 2011-v3, the new motherboard sets fresh industry standards. It
features the ultimate RGB lighting scheme with five independently-controlled onboard
LED areas plus one 4-pin RGB header, and all can be synchronised by the all-new
Aura software for stunning aesthetics. ROG has also teamed up with well-known
RGB strip-makers and case manufacturers, including CableMod, IN WIN, DEEPCOOL,
BitFenix, and Phanteks — helping gamers to light up as easy as RGB wherever
they see the Aura Ready logo.
The
new motherboard is equipped with multiple exclusive technologies to aid extreme
overclockers. These include Extreme Engine Digi+ voltage-regulator module (VRM)
for the cleanest, smoothest power, ASUS-exclusive T-topology technology for maxed-out
DDR4 performance, and 5-Way Optimisation for easy and stable overclocking with
one click, including Fan Xpert 4 for ultimate cooling. 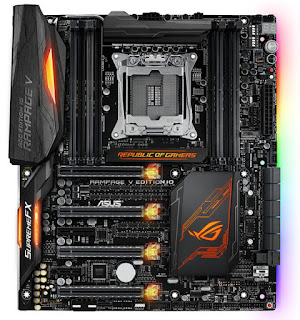 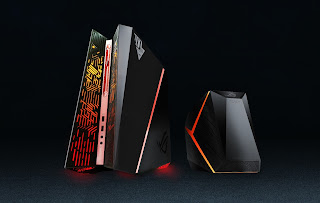 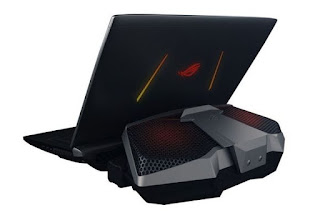