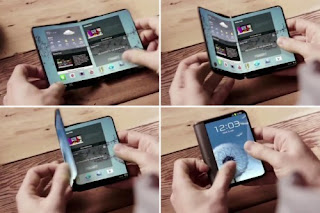 Last year, Samsung was said to be developing a new device with a foldable display. The project, codenamed Project Valley, is rumoured to be available in the market next year.

According to sources, this new smartphone will be equipped with OLED display technology. To put it simply, users can fold the device into a smaller form factor and use it like any other phones in the market right now, or unfold the device to use it as a tablet device.

From the previous concept images, the device will appear to be as thin as a wallet after folding in, making it highly portable. Its flexibility also makes it extremely fitting for different user scenarios. It has also been stated that Samsung has already successfully developed such displays and are in the midst of talking to their partners to adopt the technology.

It is speculated that the initial model will be a 5 inch smartphone when folded, and a 7 inch tablet when unfolded. Gone were the days where smartphones transform into tablets with docks. In the near future, your smartphone and tablet will be the same physical device.

Xiaomi Max revealed - To be launched on 10th May