In order to rate a new smartphone to be “good”, it must have a decent camera. Photos captured must be crisp and perform well in various lighting conditions in order to capture the hearts of buyers who have now replaced their usual digital camera with camera phones. The Sony Xperia Z Ultra has got a rear camera which can capture photos of up to 8 megapixels in size. It also has a front 2 megapixel camera for your usual video chat and selcas. Will the photos taken be up to the standard of the instagrammer? Will food look better than what they actually are? We will put the Sony Xperia Z Ultra to the test and capture some sample shots and compare it to a BlackBerry Z10 device, which I feel is the minimum requirement for how a good camera from a smartphone should perform.

Other than photos, we will also take different video shots on both smartphones to see if 1080p recording capabilities really mean high definition videos that are being produced. We will also test both devices under different lighting conditions. 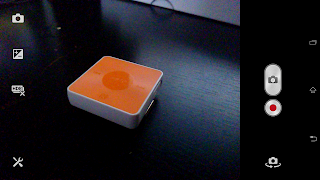 Of course, before taking a look at actual photo samples, we have to take a look at the camera app itself. Honestly, the app preview does not represent the actual quality of the photos. In low light conditions, the camera preview looked extremely grainy and noisy. This can be seen from above. However, the actual photo taken will look better. The same sample photo can be seen in the section after this. 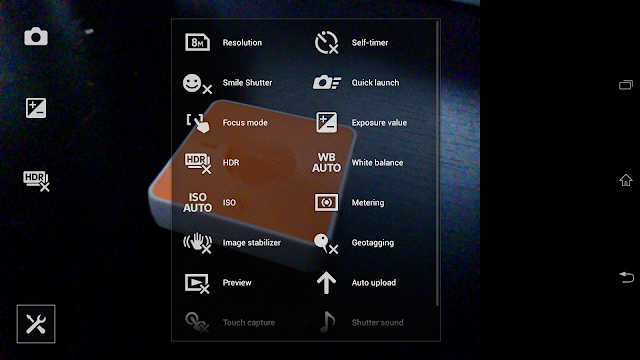 Under the settings section, we are exposed to quite a number of things which we can change to get our perfect picture. This includes the resolution, white balance, exposure value, ISO, timer and Image Stabilization feature. From here, you can also realise cool features like smile shutter which takes a photo when it detects a smile, as well as High Dynamic Range feature for better photo quality. 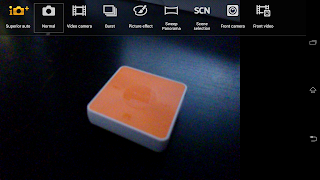 You can also put the camera into different modes, just like those settings which you can find on your usual digital cameras. The Camera app also allows the taking of panorama images. Burst images are also supported, allowing users to capture every moment of a fast paced action. 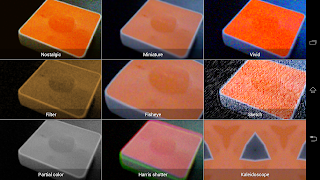 Many photo filters and effects can also be selected. These added on layers will be previewed live and you can choose the one which suits your style best. 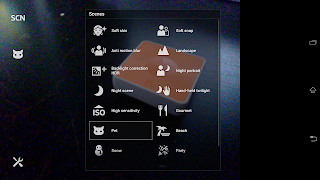 The application also allows the selection of different scene which automatically configures the best settings for each scenes.

Under low light conditions, light in the photos taken from the Sony Xperia Z Ultra is more concentrated as compared to the BlackBerry Z10, resulting in an image that seems to be doctored. They have placed in unnecessary focus to make photos brighter and with higher contrasts, resulting in unnatural colours. However, I still have to agree that the colours looks more vibrant and not as “washed out” as the BlackBerry Z10.
In daylight conditions, the photos from the Sony Xperia Z Ultra bring about an overall more vibrant and natural lighting and color as compared to the Blackberry Z10. As expected, the skies looks much more blue and greens are reproduced in a more adequate shade.
Do also take note that the Sony Xperia Z Ultra has a wider lens and is able to take a wider scene capturing from the same distance. However, Sony Xperia Z Ultra does not have any hardware flashlight on it and the fact that it performs poorly in low light conditions makes it less viable for someone who takes a lot of photos and demands crystal clear images. However, a workaround is also possible. Since there are lanyard holes for the Sony Xperia Z Ultra, one can simply buy a LED torch with a lanyard and attach it to device.

Comparing 1080p footages taken from both phones, we realised that they had similar qualities. The BlackBerry Z10 had a overall brighter video captured as compared to the Sony Xperia Z Ultra. However, we found that footage from Sony Xperia Z Ultra were clearer. For example, the leaves on the tree looks more distinct and also sharper. There were minimal differences in video capturing capabilities.

*Apologies for the partial covering up of Sony Xperia Z Ultra video footage.

We found that the photo quality on the Sony Xperia Z Ultra to be decent, but still not up to standard for a high end phone. It could also be a software issue, meaning that future firmware upgrades may result in better photos taken. However, the lacking of flash built into the unit is a huge deal breaker. Overall, photos taken from the Sony Xperia Z Ultra is just like any other usual smartphone and would still be far from the quality of a high end camera device like the Nokia Lumia 920/925/1020. As for the video capture, there weren’t much to be said as differences were small. Both produced decent footages.