At CES 2022, AMD announced the new Radeon RX 6500 XT graphics card targeted for budget-conscious gamers. The Radeon RX 6500 XT is said to be the most affordable graphics card that is capable of running games at 1080p resolution. Announced at a suggested retail price of USD$199, it could be a real contender for graphics cards in this segment, especially when competition’s latest budget offering, the RTX 3050 comes in at USD$249.

Previously, we mentioned in our review of the RX 6600 XT that it could be too expensive a graphics card just for 1080p gaming, and that it was more than capable of powering games at 1080p. We wished for a cheaper and less performing alternative, and sure enough, it’s here.

While the product may sound great for the majority of gamers who still run games at 1080p resolution, the actual performance of the card is what matters. Would it be able to meet the expectations of gamers, or will it fail miserably due to performance issues? We will learn more by putting the PowerColor FIGHTER Radeon RX 6500 XT 4GB GDDR6 Graphics Card to the test. 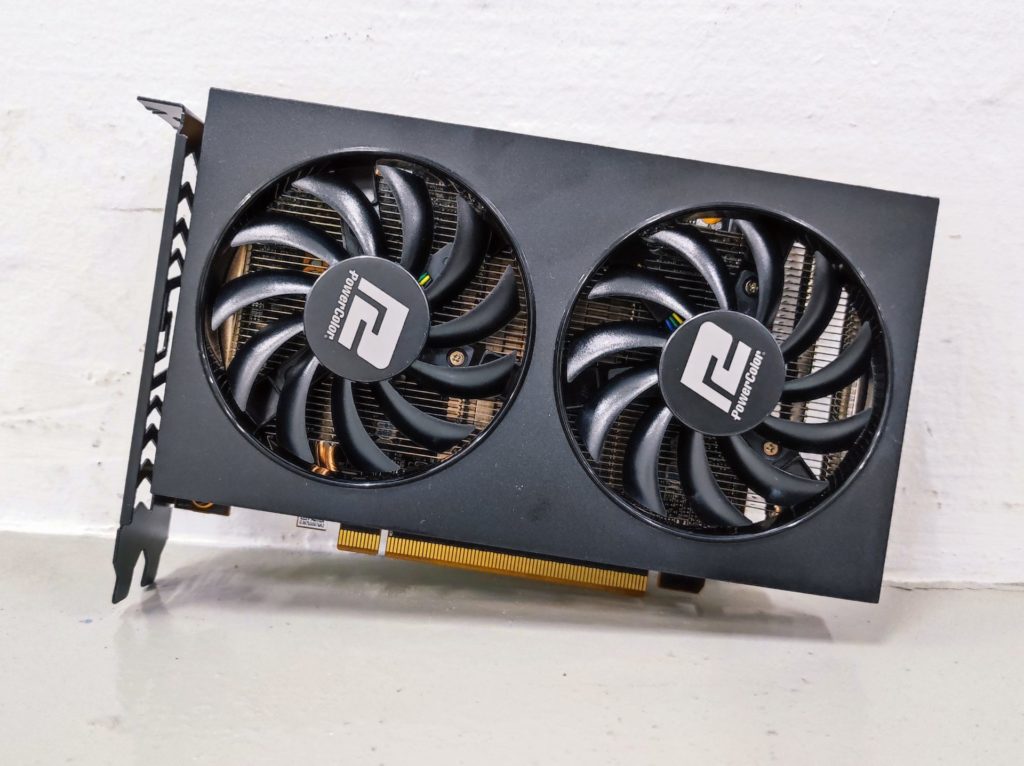 The PowerColor FIGHTER Radeon RX 6500 XT is created with a very simple design. It is equipped with 2 x 80mm fans to optimally cool the graphics card when required. As this graphics card is based on the latest generation RDNA2 architecture, it should also perform rather efficiently as compared to predecessors, and it is expected that it will run cooler as well. 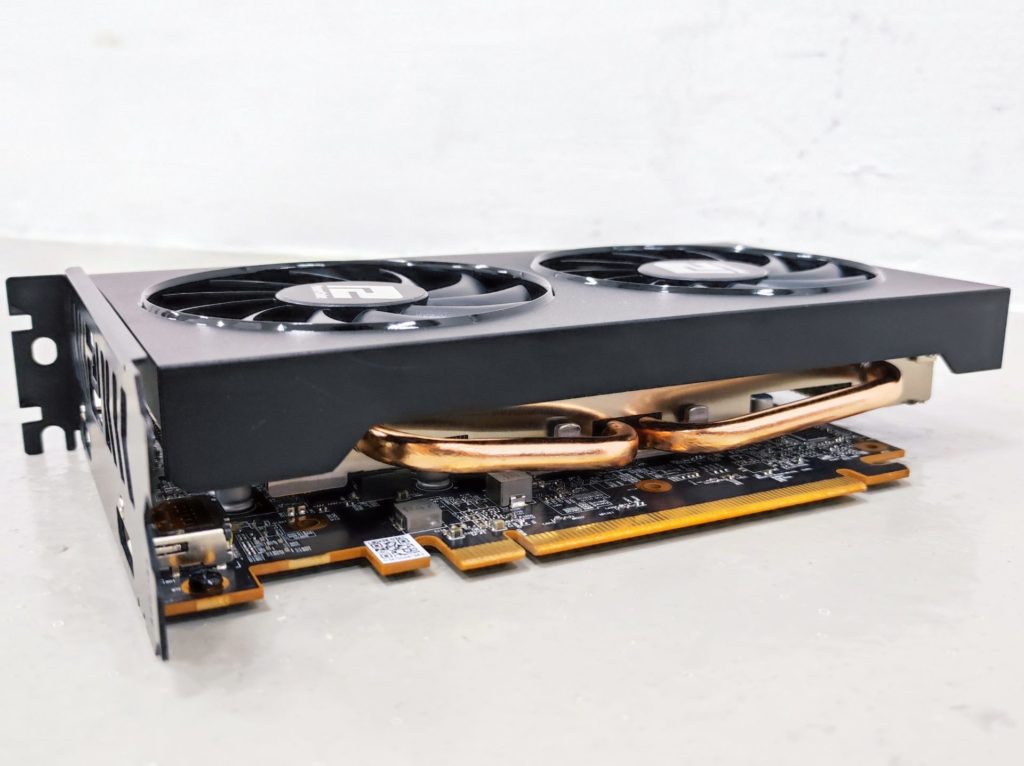 Despite it being a rather simple and straightforward graphics card, the PowerColor FIGHTER Radeon RX 6500 XT is still paired with a decent cooling system. The card is attached with a large heatsink that is connected with two heatpipes to properly cool the GPU and its surrounding components. 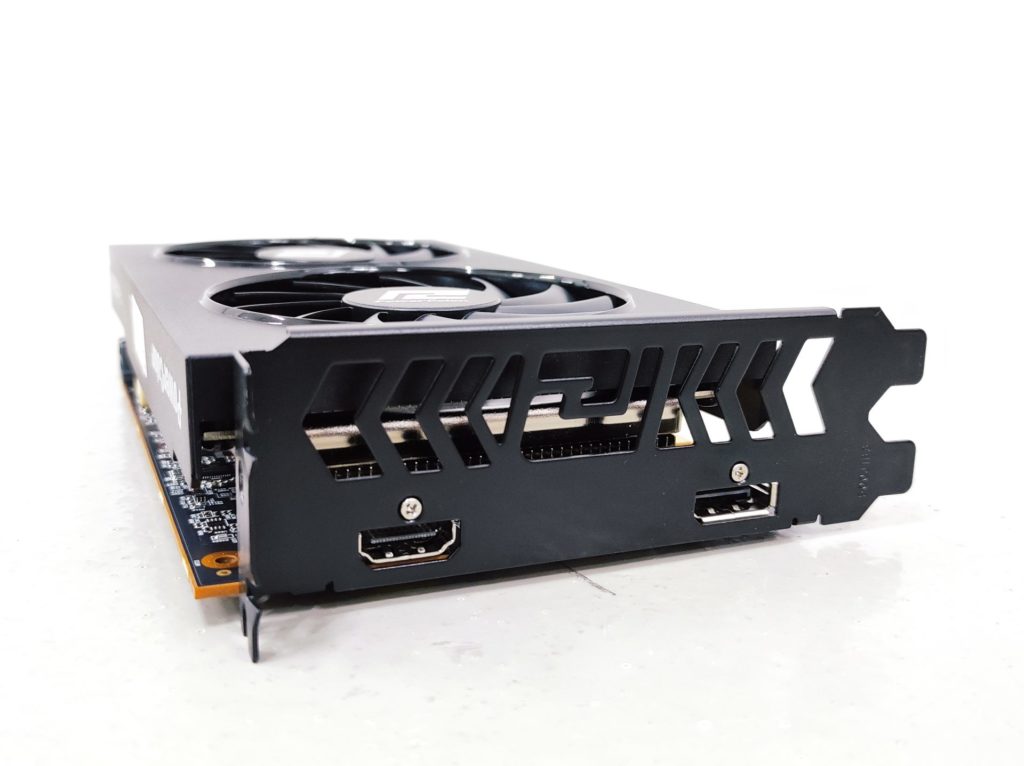 This card is quite limited in its graphics output, as it only has a single HDMI port and Display Port. We would have preferred if more display output ports were available on this graphics card. This would be useful for those who seek an inexpensive graphics card just for display output in a multi-monitor setup, and don’t require a powerful graphics card for graphics processing. 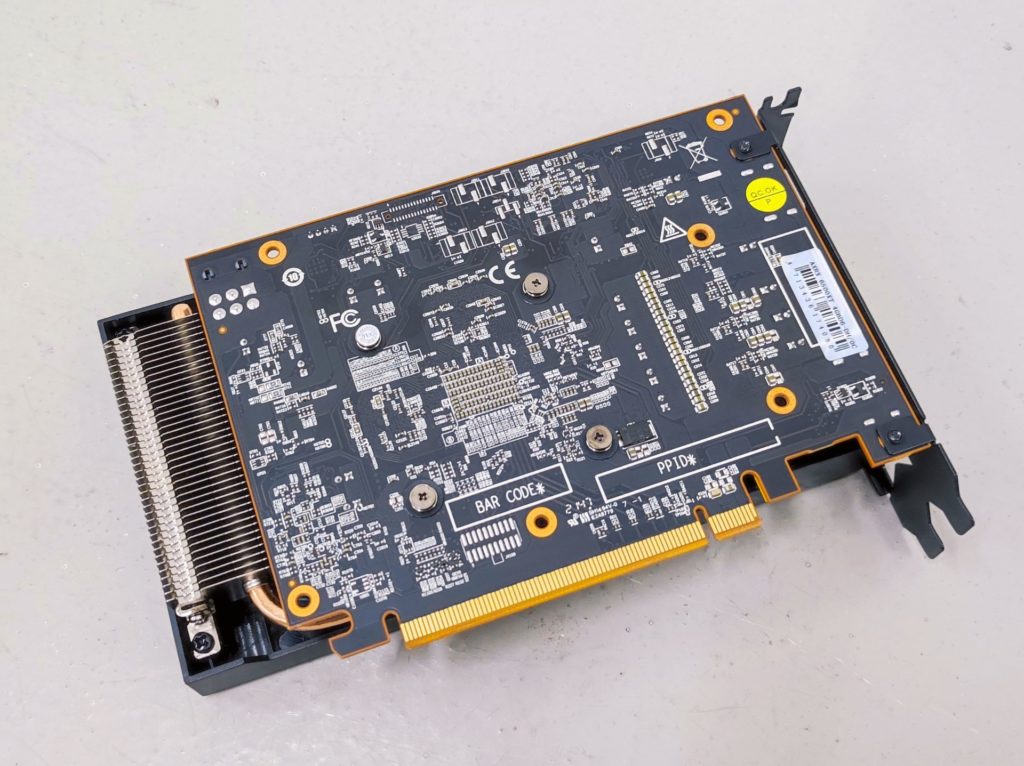 As expected of an inexpensive graphics card, the PowerColor FIGHTER Radeon RX 6500 XT also does not come with a backplate. It’s an logical exclusion, as the weight on the main PCB is considered insignificant to warrant additional physical support to the graphics card.

Putting all the speculations aside, let us put our hypothesis to the test, and find out if the RX 6500 XT could really be as bad as it seems on paper. 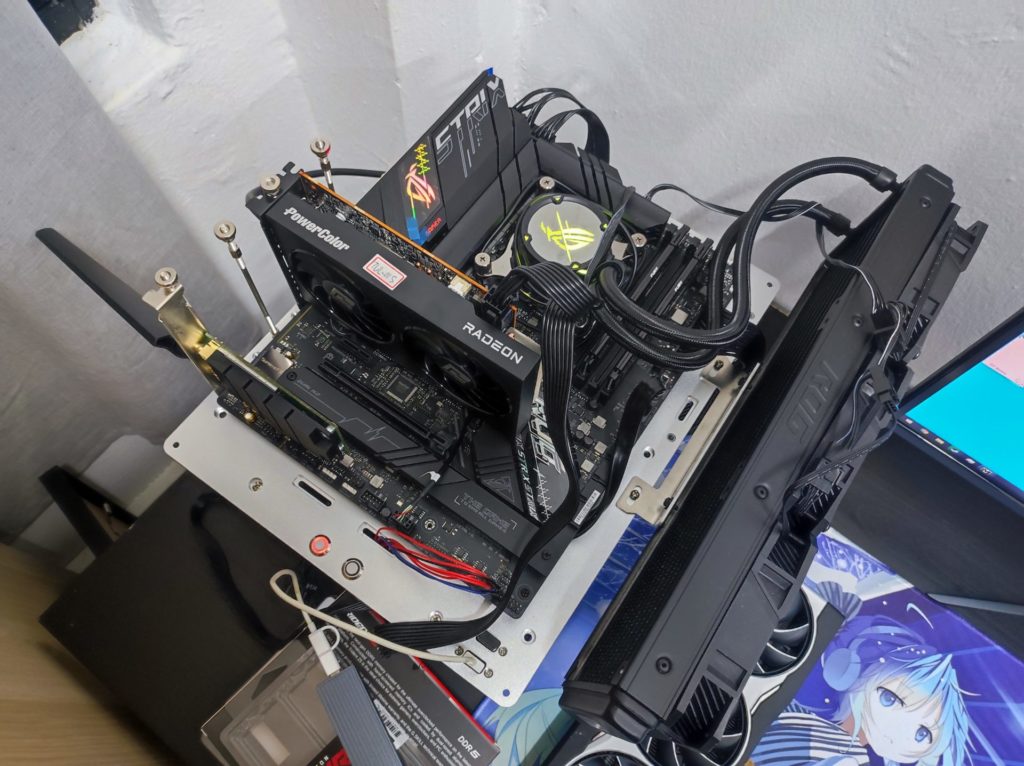 In our tests, we are going to put the PowerColor FIGHTER RX 6500 XT 4GB Graphics card to the test and compare it to its predecessor, the RX 5500 XT. Furthermore, we will also add the RX 6600 and GTX 1650 into the mix, to understand the performance difference between what’s next in line, as well as what’s still available from competition. The synthetic benchmarks give us a good sensing of the performance levels for each of the graphics card. The PowerColor FIGHTER RX 6500 XT comes in second, showing that it’s faster than its direct replacement, the RX 5500 XT, and competition’s GTX1650. However, we can also see the huge performance difference between the RX 6500 XT and RX 6600, which makes us wonder if it’s actually worth it to just get the RX 6600 instead. 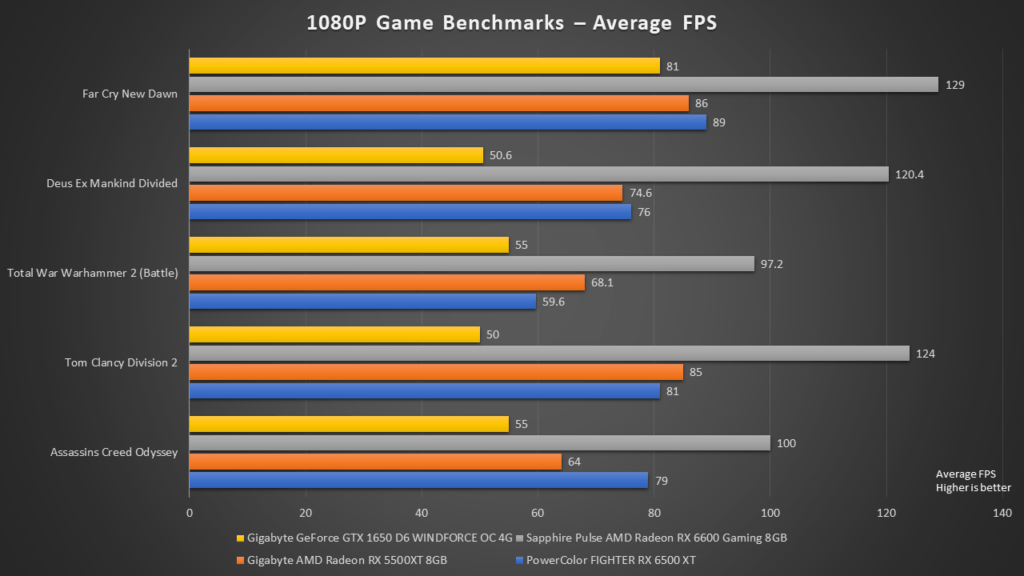 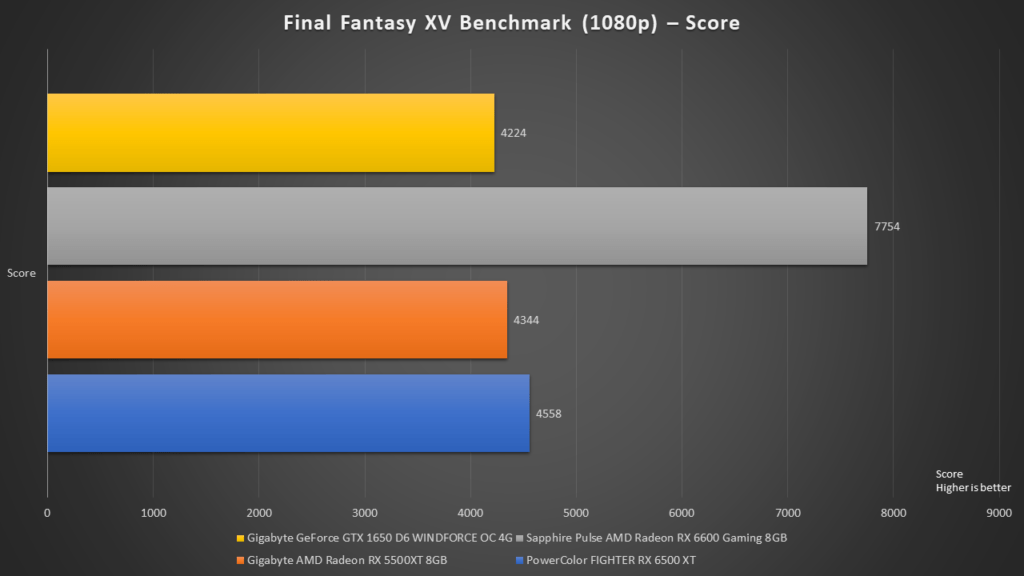 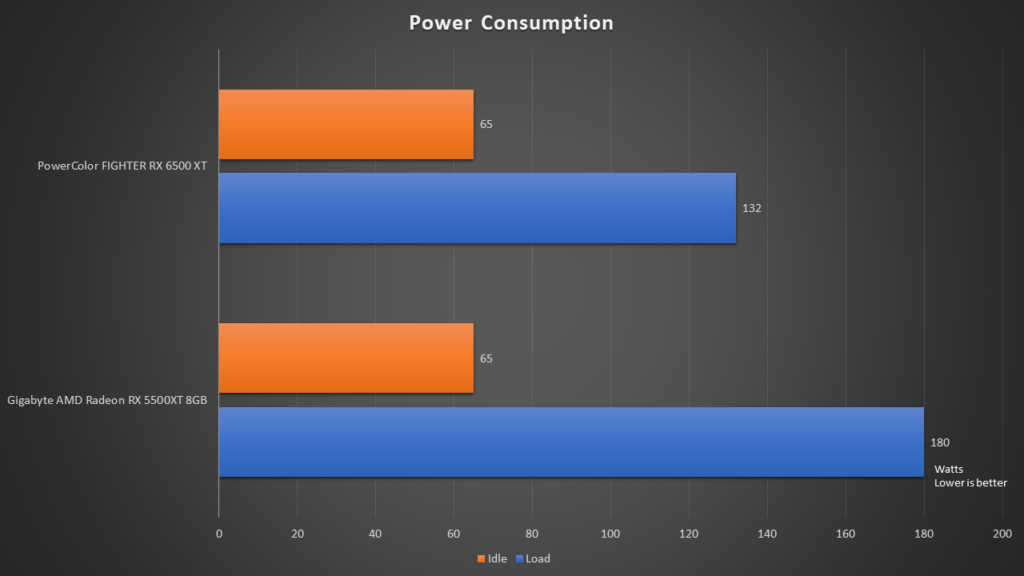 There is no doubt that the RX 6500 XT performs with better efficiency. Not only does it has a lesser number of compute units, its improved RDNA2 architecture also helps in compute efficiency. 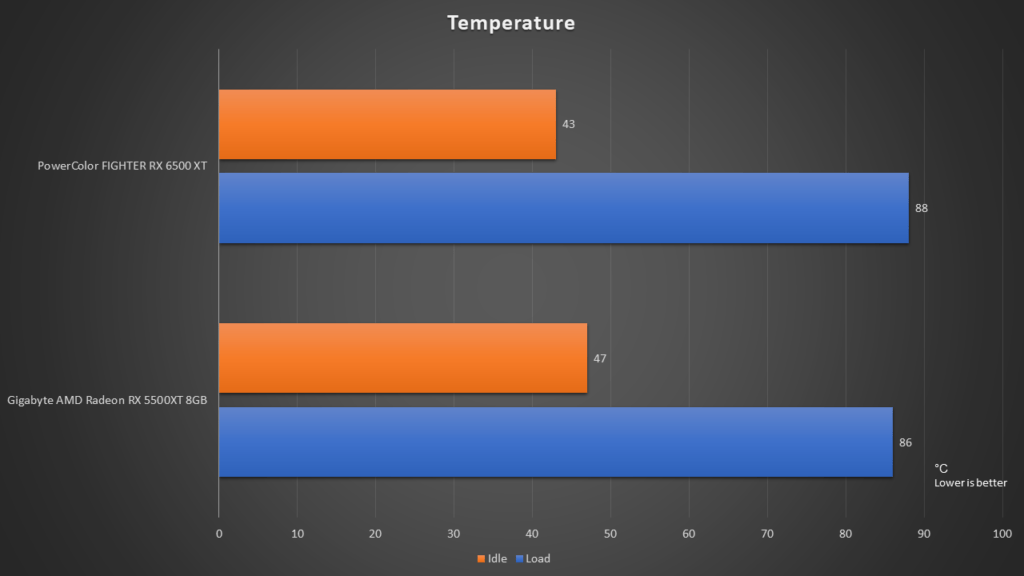 As for temperatures, both cards had similar idle and maximum temperatures recorded. Both cards utilize a “stop-fan” feature, which allows the card to be only passively cooled while on idle. This allows the card to remain silent when not running intensive graphics applications. Regardless, the PowerColor FIGHTER RX 6500 XT still remained quite quiet even when the fans are at 100%.

In terms of performance, the PowerColor FIGHTER RX 6500 XT didn’t really leave us with an impression. It’s only marginally faster than its previous generation RX 5500 XT, and the fact that it has only 4GB of dedicated video memory worries us, as some games do require that additional video memory for it to perform even at 1080p resolution. In fact, even the RX 5500 XT did come with 8GB of dedicated video memory, so we weren’t sure why the decision was made to reduce the video memory on a newer generation of product.

The main benefit of the RX 6500 XT is that is indeed far better than the RX 5500 XT in terms of energy efficiency, thanks to its improved graphics architecture and reduced number of compute units. To be honest, we wished that the RX 6500 XT could be even more competitive by featuring a higher number of compute cores and more VRAM, so that it would be an obvious choice for gamers. Now that the performance results have shown us that there isn’t any significant performance uplift over its predecessor, I can’t get over the thought of me getting something of similar performance at the same price of a previous generation card.

Nonetheless, by seeing what’s available in the market, the RX 6500 XT still possesses certain value. It runs most games at 1080p smoothly, and perhaps that is what all matters.  It’s neither an obvious nor amazing product, but it works as it suggests. We just have to say that AMD has played a rather weak hand in this round of the GPU wars, even though they were already on the losing end.

This makes us even more excited and curious about the NVIDIA RTX 3050 graphics card, which doesn’t raise any red flags based on its specifications. Even though it’s USD$50 more than the RX 6500 XT, it would be an even more compelling product if it hits the performance sweet spot between the RX 6500 XT and RX 6600.