Not known to many, the NVIDIA GeForce GTX 1650 was actually refreshed earlier last month. The new GeForce GTX 1650 now comes with newer and more efficient GDDR6 memory, instead of its previous GDDR5 memory. Everything else remains largely the same. It is still based on the TU117 GPU, has a TGP of 75W and is expected to retail at the same price.

Not to confuse buyers with the two different variants, NVIDIA placed both cards at the same performance level by changing the new GeForce GTX 1650 GDDR6’s clock speeds. As expected, the higher memory bandwidth will bring about higher performance. To make sure that both cards have the same performance, reference core clock speed of the refreshed model has been reduced from 1485MHz to 1410MHz. Its boost clock has also been reduced from 1665MHz to 1590MHz.

The Gigabyte GeForce GTX 1650 D6 WINDFORCE OC 4G is one of the new cards that’s currently available in the market. In this review, we are going to take a look at the performance of this card and how it fairs with games running at 1080p resolution. As the GeForce GTX 1650 is expected to be an entry to mainstream graphics card, this review should be a good reference point for the budget conscious bunch seeking to purchase a new graphics card for their computer system. 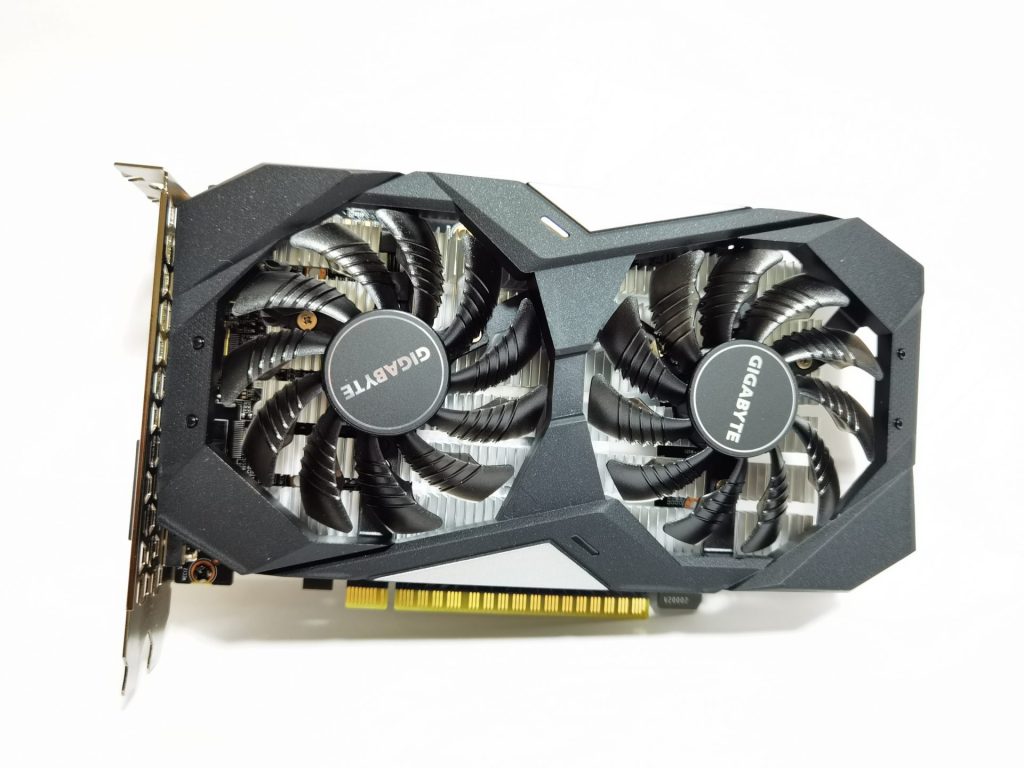 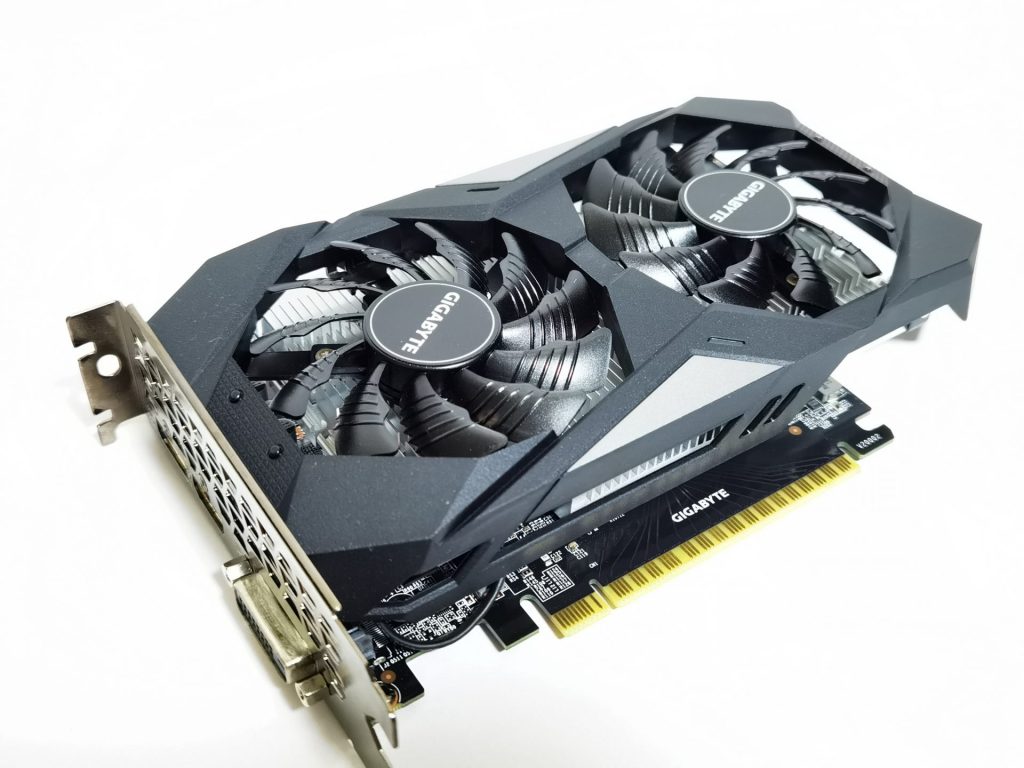 The Gigabyte GTX 1650 D6 WINDFORCE OC 4G graphics card comes with a rather simple design. It utilizes the Windforce 2X cooling system, which features 2 x 80mm fans that actively cools the graphics card. Interestingly, you may have also realised that the fans spin in opposite direction from one another. Gigabyte says that this design ensures a smoother airflow through the heatsinks, thus enabling a improved heat dissipation over traditional designs.

The cooling system on the Gigabyte GTX 1650 D6 WINDFORCE OC 4G can also perform silently. When there is low graphics requirements from the system, the fans on the card will remain off. This gives users a complete silent operating environment. Cooling is done only passively by the heatsink. When doing more graphics intensive work and the GPU heats up, the fans will automatically turn on to cool the graphics card to a desired state. 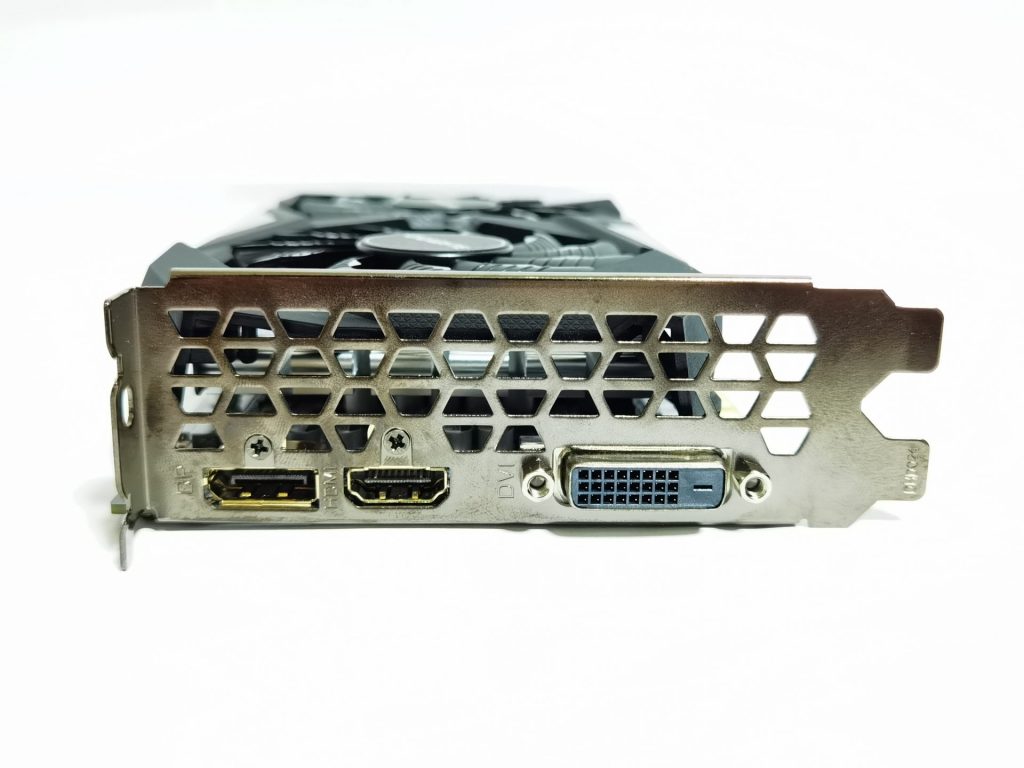 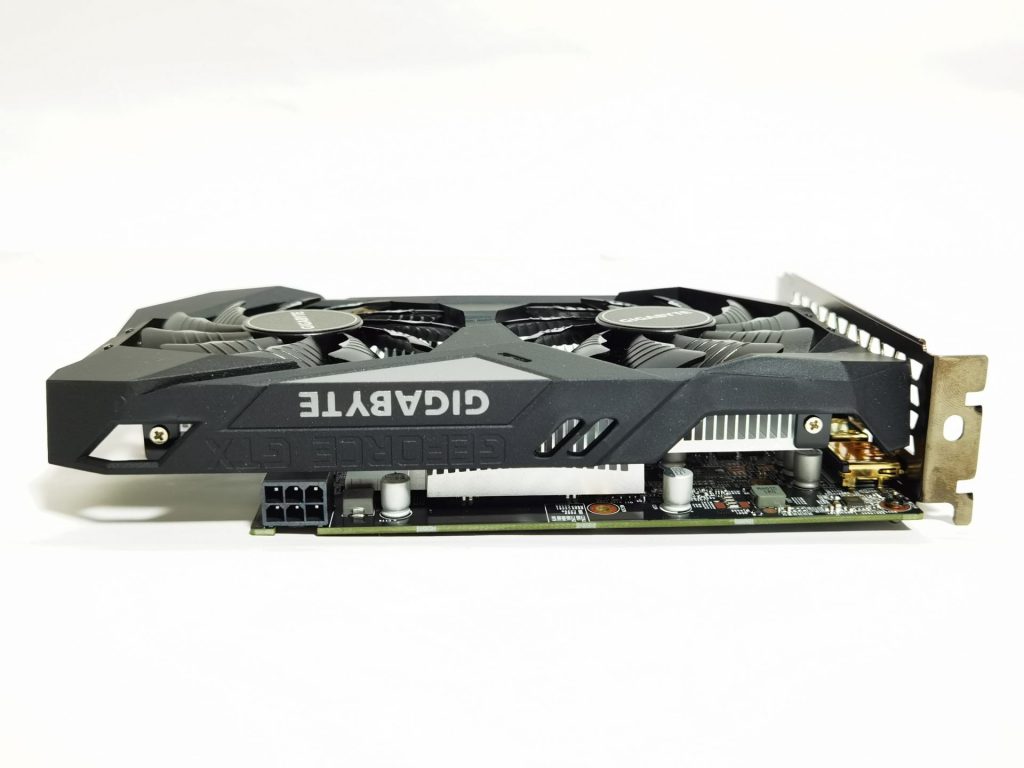 The GPU core is cooled by a single aluminum heat sink. As the GPU is only rated at 75W TGP (Total Graphics Power), we don’t expect that this card will heat up too much in the first place.

Also, we took note that the Gigabyte GTX 1650 D6 WINDFORCE OC 4G requires a single 6-pin PCIe graphics card connector to power it. Most GTX 1650 in the market today which are based on reference clock speeds does not require this additional power port. If you are planning to build a low power system and do not have an available 6-pin power cable, this card may not be suitable for you. We’ve tried to run the graphics card without the 6-pin power connector attached, but it did not run. 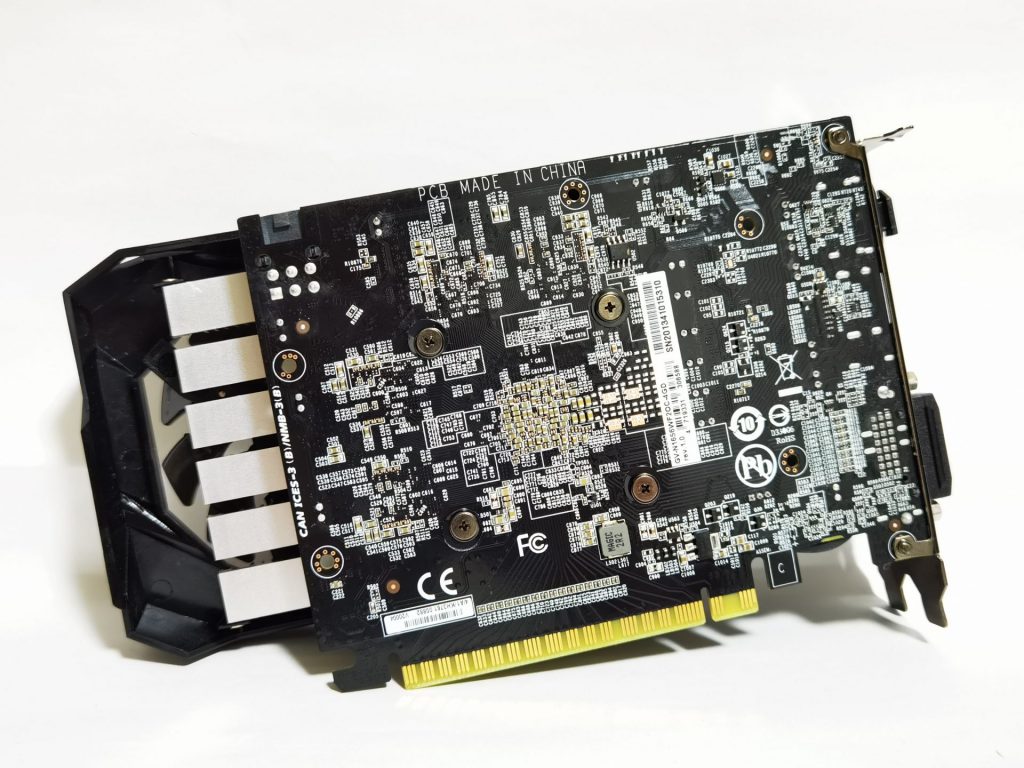 The graphics card also does not come with a back plate. This is considered to be appropriate for a graphics card of this low heat output, size and weight.

The Gigabyte GTX 1650 D6 WINDFORCE OC 4G also comes with the AORUS Engine software. This software helps users to monitor their graphics card’s status. It is able to constantly track the card’s temperature, GPU and memory clock speed. It also provides users with an easy way to overclock their graphics card by either increasing the GPU Boost clock speed or memory clock.

To ensure that the card stays cool even in an overclock state, AORUS Engine can also allow users to set the fan curve profile on the graphics card. There is also a useful tool that is used for ensuring that the latest software and drivers are also installed. It checks for the latest software and driver versions, and helps you to download them directly. 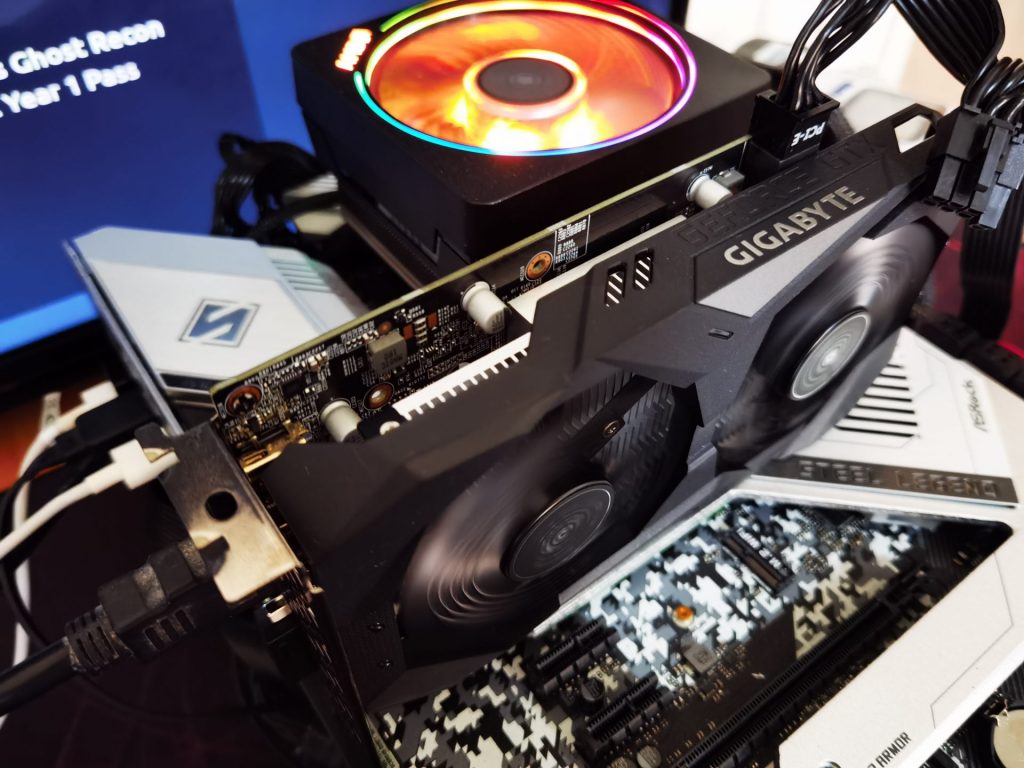 The gaming focused benchmark tests will be carried out based on the following settings:

Based on synthetic benchmark scores, we can see that the GDDR6 variant performs slightly better in both 3DMark Time Spy and 3DMark Fire Strike tests. While the score difference in the the DirectX 12 benchmark was minimal (Time Spy), there was a larger performance difference in DirectX 11 (Fire Strike). 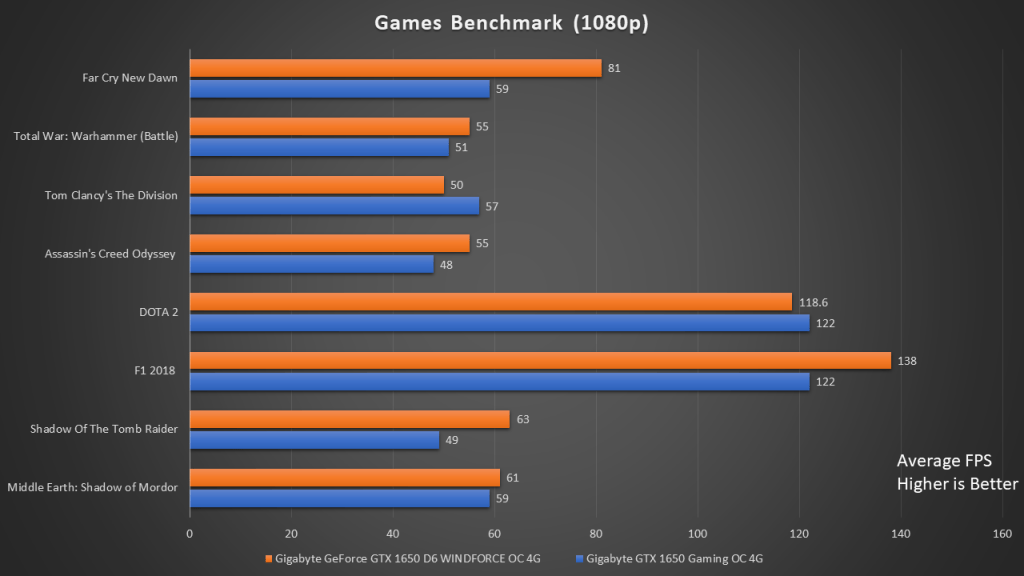 It’s apparent that the GDDR6 memory configuration was beneficial to the GTX 1650. While some of the performance difference can be attributed to CPU differences used in the test setups, the Gigabyte GTX 1650 D6 WINDFORCE OC 4G with GDDR6 memory was seen to perform better regardless.

Similar results are shown in the Final Fantasy XV and World of Tanks EnCore benchmarks as well. 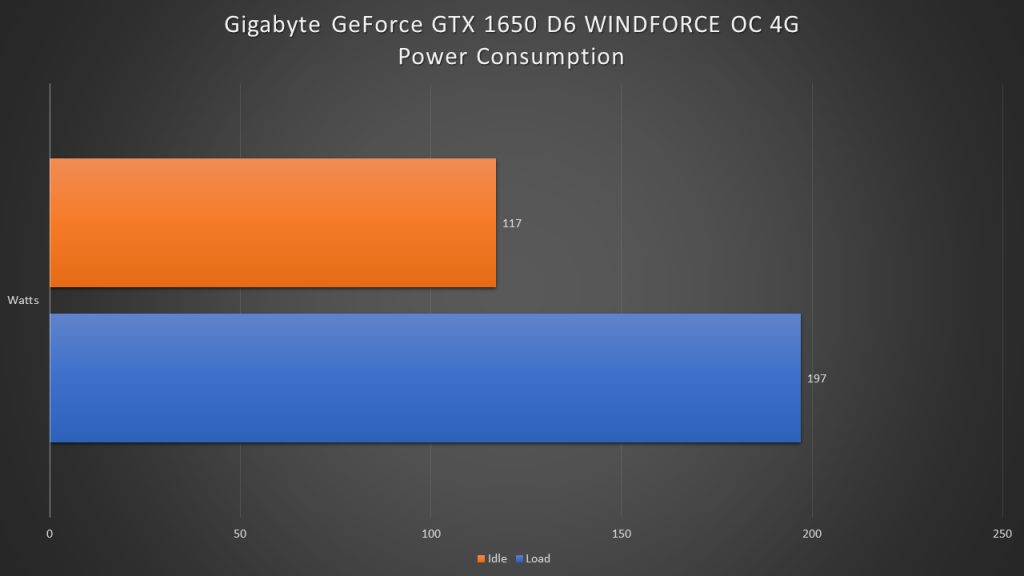 As the system is paired with a Ryzen 9 3900X CPU, we can expect that the power consumption could be rather high for a start. This computer system idled at about 117W. When we opened up Furmark and stress tested the Gigabyte GTX 1650 D6 WINDFORCE OC 4G, the power consumption rate raised to 197W. This is an expected value, judging that the Gigabyte GTX 1650 D6 WINDFORCE OC 4G is rated to have a Thermal Graphics Power of 75W. 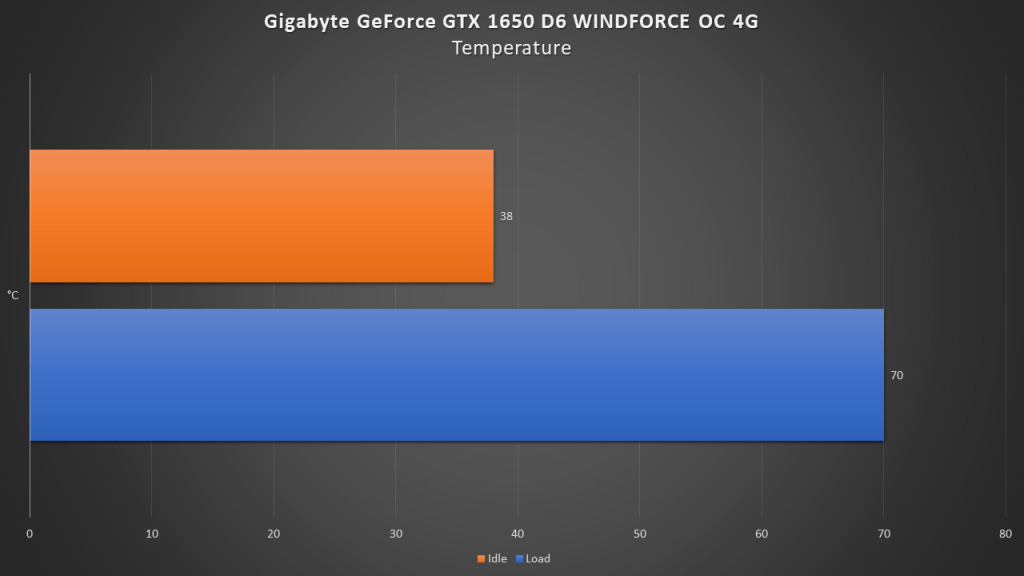 As the Gigabyte GTX 1650 D6 WINDFORCE OC 4G cools the GPU core in passive mode when not stressed, it could have a higher idle temperature than usual. We recorded an idle temperature of 38°C. When stressed in Furmark, its temperature raised to 70°C. This is still considered to be very acceptable. 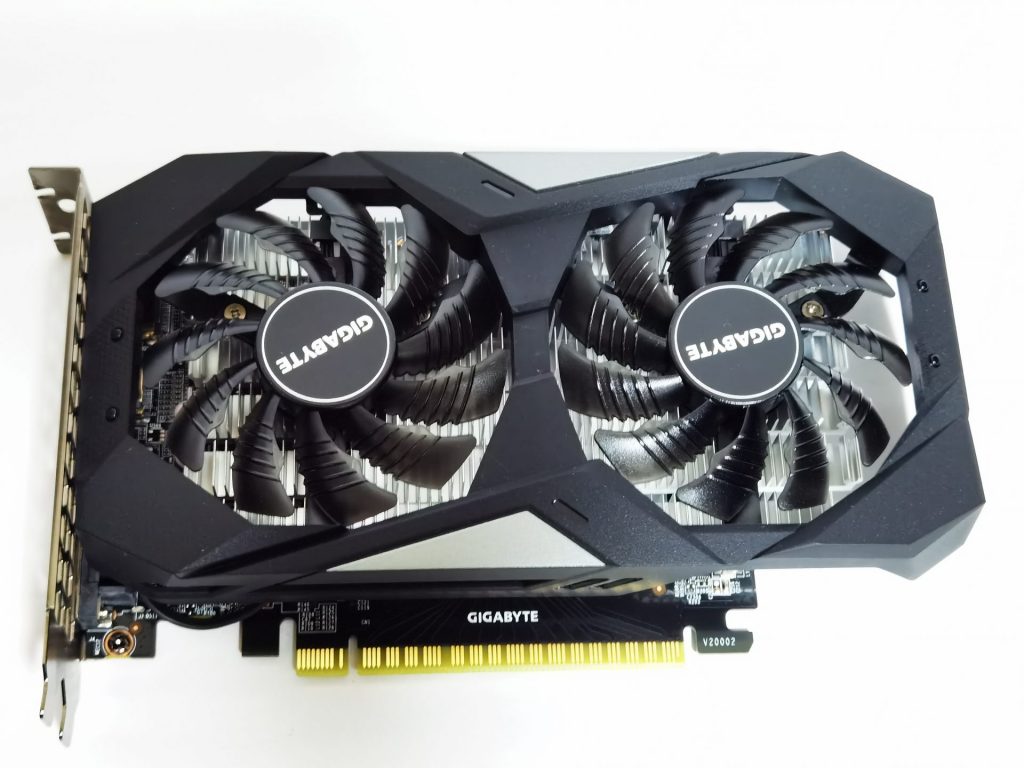 Based on our expectations that we should always play games in high settings, and the expected average refresh rate should be above 60FPS, we can see that the Gigabyte GTX 1650 D6 WINDFORCE OC 4G still has quite a bit more to go. It is able to achieve the expected frame rates on some of the less demanding games, but its performance is still not optimal for AAA game titles like Assassins Creed and Shadow of the Tomb Raider.

However, there is no doubt that the addition of the new GDDR6 memory has increased the performance of the GTX 1650 slightly.

The GeForce GTX 1650 graphics is placed in an awkward position in the market. The GeForce GTX 1650 SUPER, which is only priced tens of dollars more, provides much more value for its worth. Unless you are tied to a strict budget, we would recommend that you can go a level higher for something better for better gaming experience at 1080p.