With the launch of the Turing architecture last year, NVIDIA have been successful with introducing a range of new graphics card and technology to the market. While the initial set of RTX cards were focused for the gamers who seek the best of the best, NVIDIA also released the GTX 16 series, to meet the mid and low tier markets. These segment of users usually just game on 1080p resolution and will be happy as long as their games can run smoothly.

The GeForce GTX 1650 is the most affordable graphics card from the whole Turing based GTX series. Even though it costs the least in the whole Turing lineup, it should also be able to handle most common game titles today well thanks to the improvements in graphics technology. Well, instead of having our doubts on this card, let’s run some tests on this card to see how well (or badly) it actually performs.

On our test bed today, we have the Gigabyte GTX 1650 Gaming OC graphics card. This is one of Gigabyte’s key GTX 1650 variant which focuses on good cooling capabilities, silent operations and superb performance (this card is factory overclocked).

The Gigabyte GTX 1650 Gaming OC is designed to run fuss free for gamers. Gigabyte has taken care of all the engineer and design work to keep this card well tamed. Firstly, it comes with WINDFORCE 2x cooling system, which essentially refers to the two fans on this graphics card. Interestingly, you can also see that the two fans spin in opposite directions from one another. Gigabyte claims that such a design will be able to better dissipate heat away from the heat sink.

With the use of 2 composite copper heatpipes that’s in direct contact with the GPU, the heat is more effectively spread to the extended parts of the heatsink. Together with the fans, the whole cooling system should perform more than adequate for the whole graphics card.

Unlike the higher end models which has a metallic based back plate, the Gigabyte GTX 1650 Gaming OC comes with only a protection back plate. Since this back plate is not metallic, it does not help in cooling of the card, but more on enhancing the structure and sturdiness of the card. 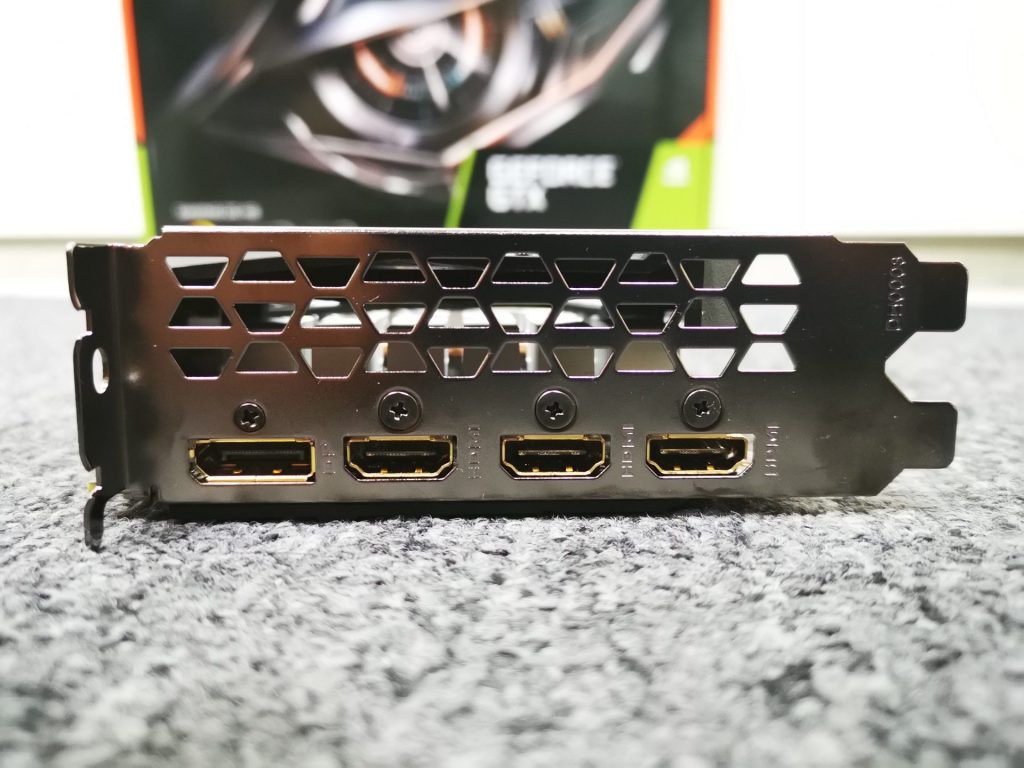 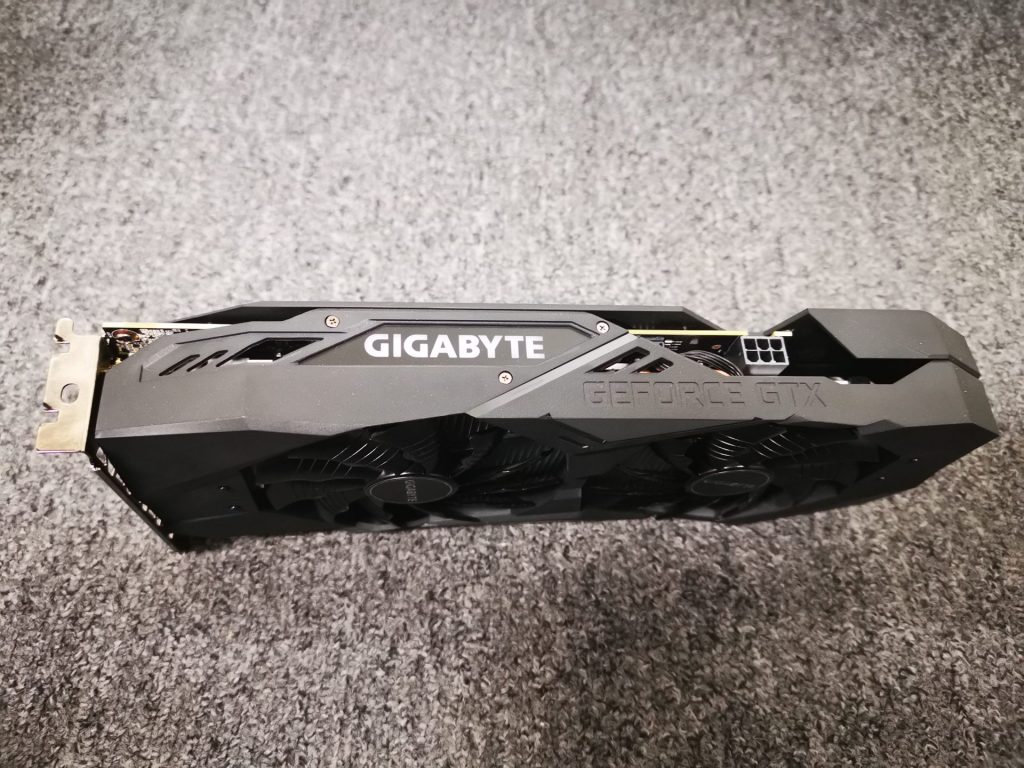 This graphics card does not take up too much power, as it only requires a single 6-pin connector. Gigabyte stated that a 300W power supply will be sufficient to power the whole system together with the GTX 1650. Oh yes, not to forget, the top GIGABYTE logo also lights up in RGB colours. The colour can also be controller via the RGB Fusion 2.0 software that can be downloaded from their website. 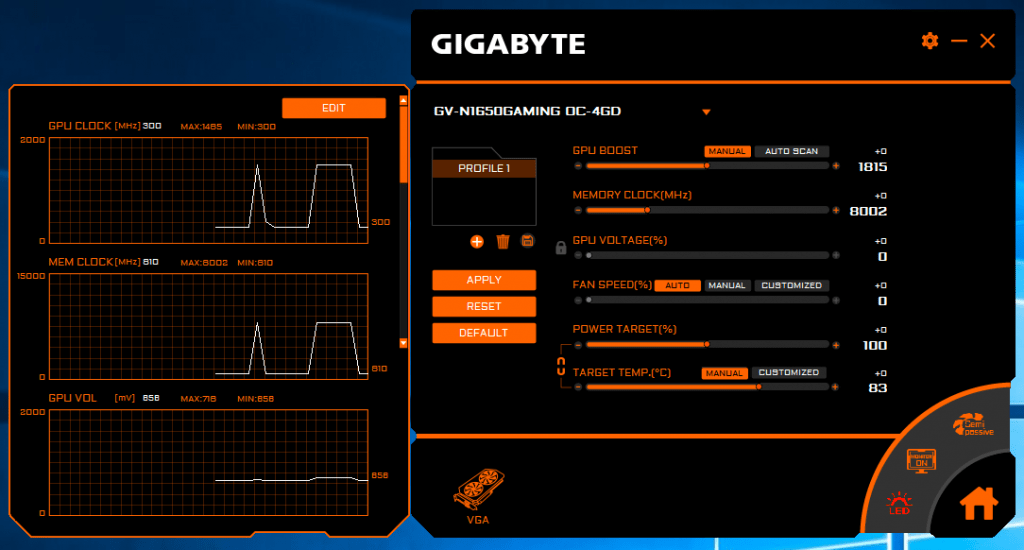 The AORUS Engine software from Gigabyte is the main software that is used to control and monitor the Gigabyte GTX 1650 Gaming OC graphics card. It captures the key vitals of the card, such as GPU core clock, memory clock, fan speed, usage percentage and many more. This software can also be used to overclock the card by increasing the core and memory clock of the card. 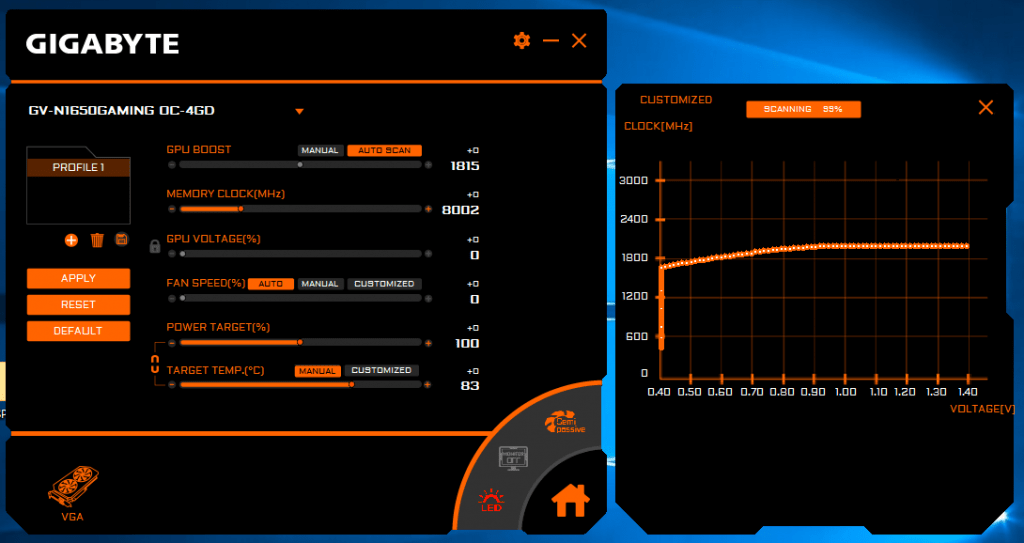 AORUS Engine also comes with an AUTO SCAN feature. This feature determines the highest frequency the graphics card can go while voltage increases. Based on profile which AUTO SCAN produced, we can see that the card works best at 0.9V with a core clock of about 1900MHz. Sadly, the software does not tell us the exact settings of the card at those voltages. We can only guess and estimate the frequency reached with the specific voltage. 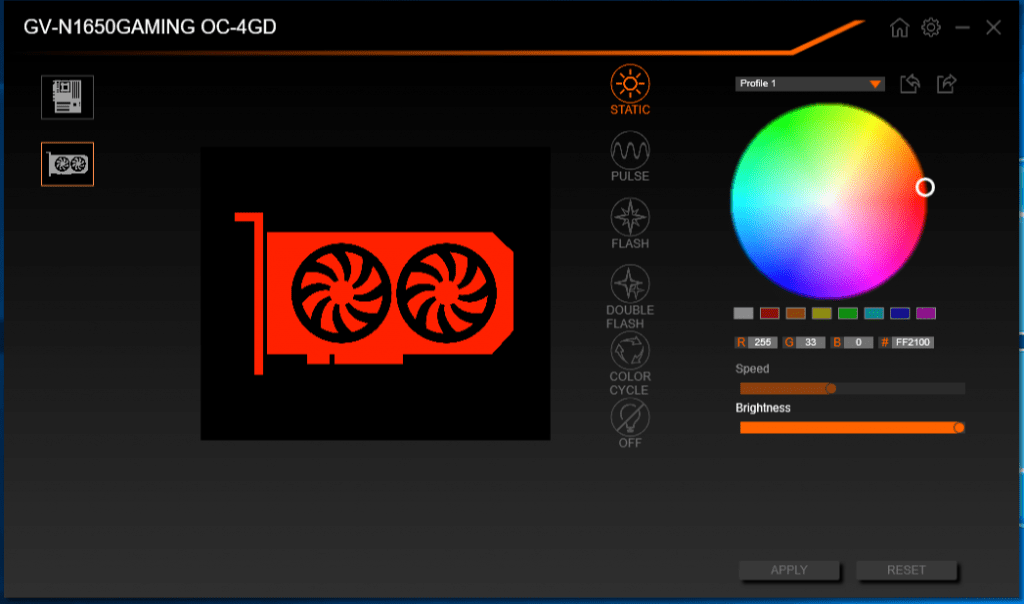 RGB Fusion 2.0 software is used to control the RGB lighting effects on the graphics card. From this software, we can control the colour, effect, speed and brightness of the RGB LEDs on the card. 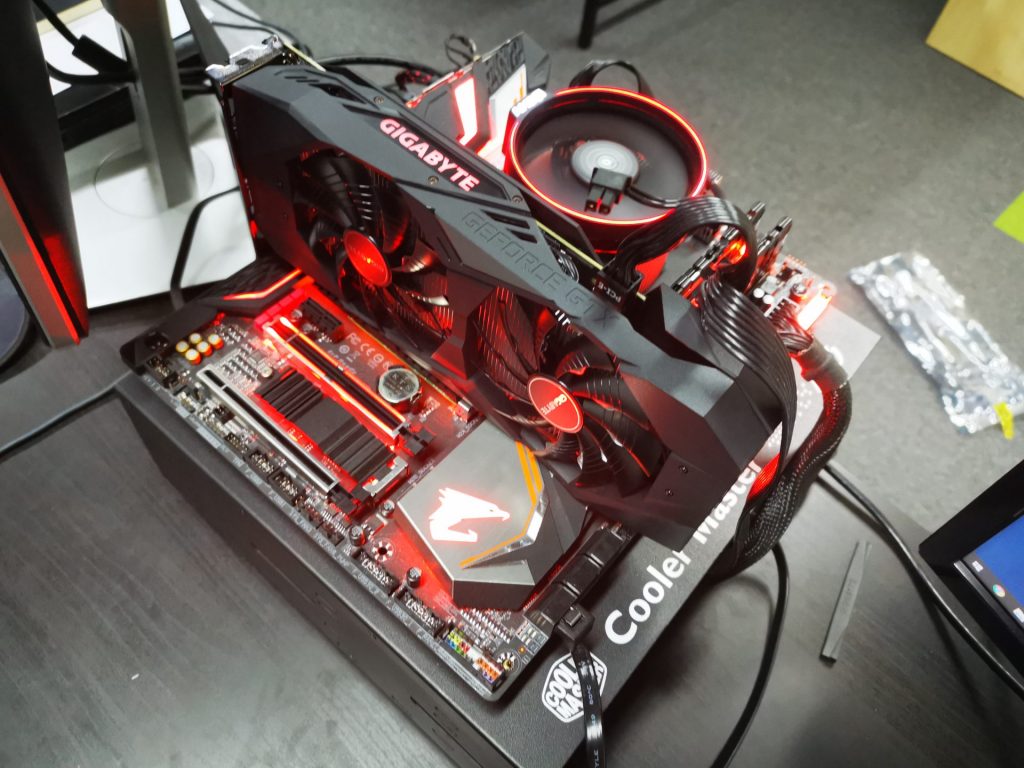 The gaming focused benchmark tests will be carried out based on the following settings: 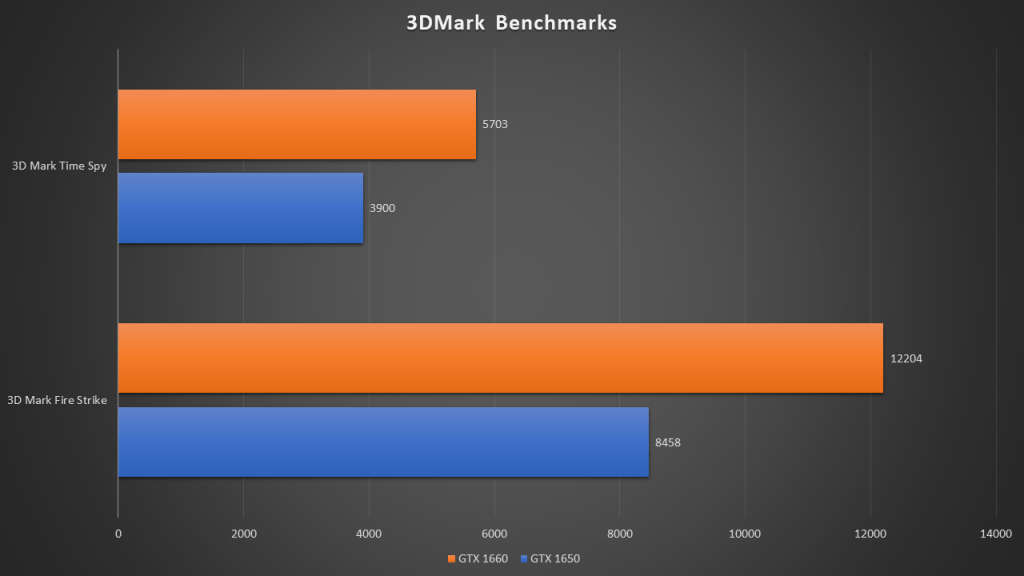 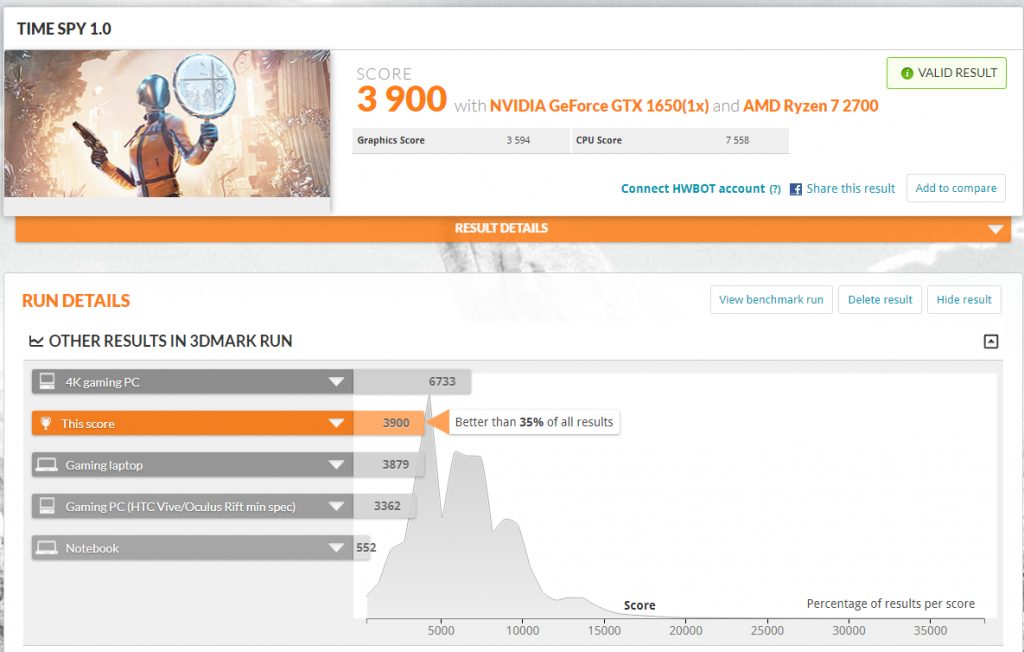 For the Time Spy benchmark, the result of 3900 places the PC in the range between a usual gaming laptop and a 4K gaming PC. As expected, the GTX 1650 is simply not made to run games at 4K resolutions. 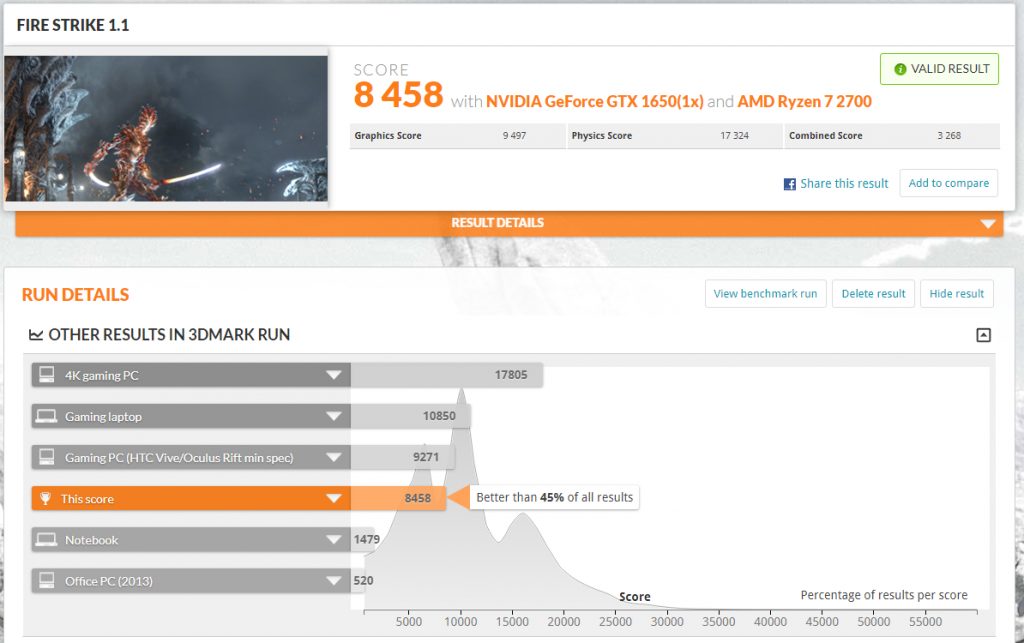 As for the FireStrike benchmark, we also saw that the scores were also comparatively lower than expected. This system will not be suitable for VR games, based on the minimum specifications of HTC Vive and Oculus Rift.

Putting the synthetic benchmarks aside, let’s take a look at how this system performs in games. 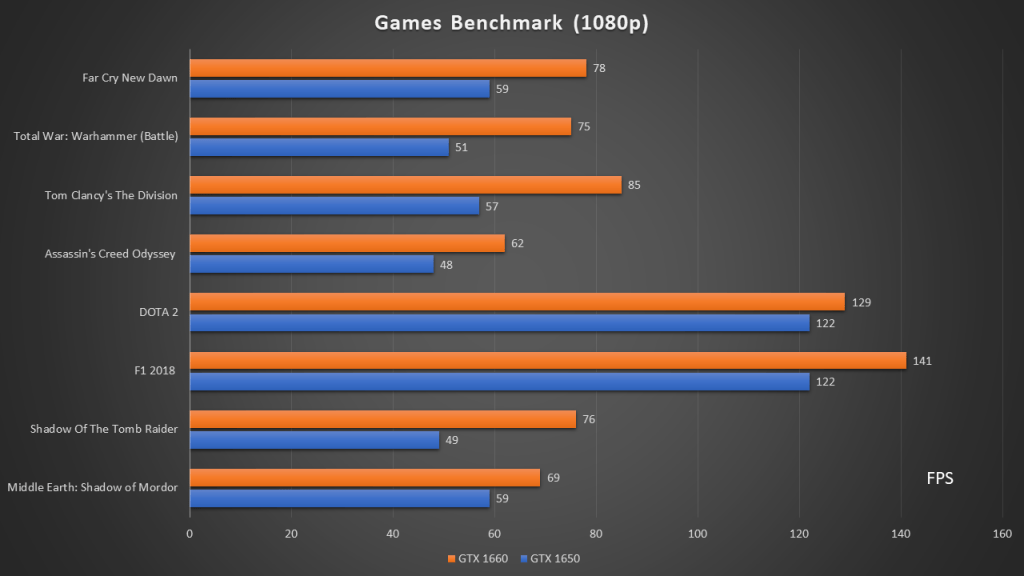 For games in the high settings, we saw that the Gigabyte GTX 1650 Gaming OC struggling to reach the bare minimum requirement of 60FPS for smooth game play. Unless the games you play are non-graphics intensive, such as DOTA 2 and F1 2018, the GTX 1650 is not as suitable as its higher end counterpart. 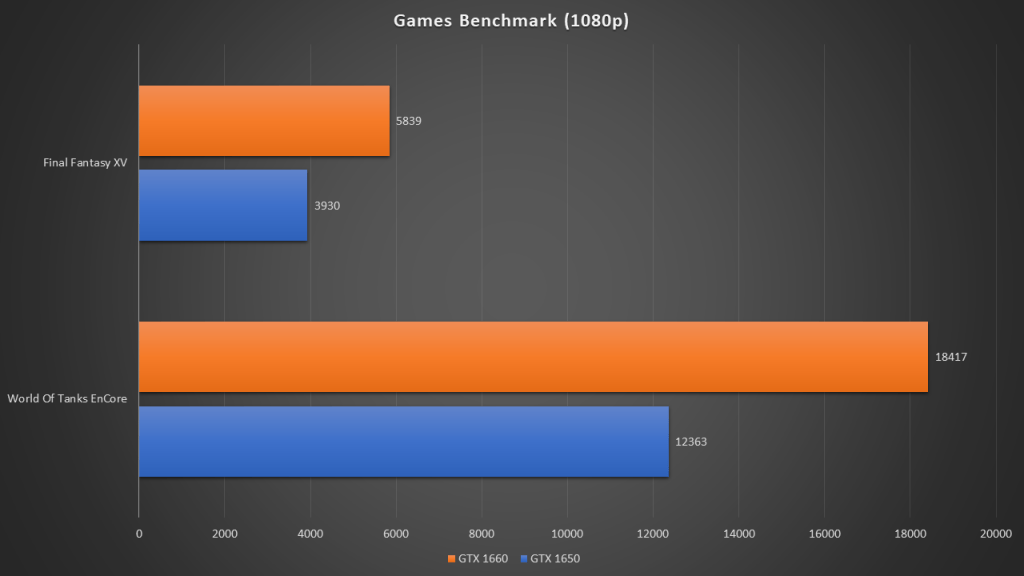 Similarly, the scores on Final Fantasy and World of Tanks EnCore also showed similar results, where the GTX 1650 was quite a bit slower than the GTX 1660.

If you are fine with playing on a lower setting, or wouldn’t mind choppy gaming experience on your gaming setup, the GTX 1650 could still be a sensible choice. However, it seems to us that a GTX 1660 graphics card is the bare minimum to play today’s games at 1080p resolution and high settings. 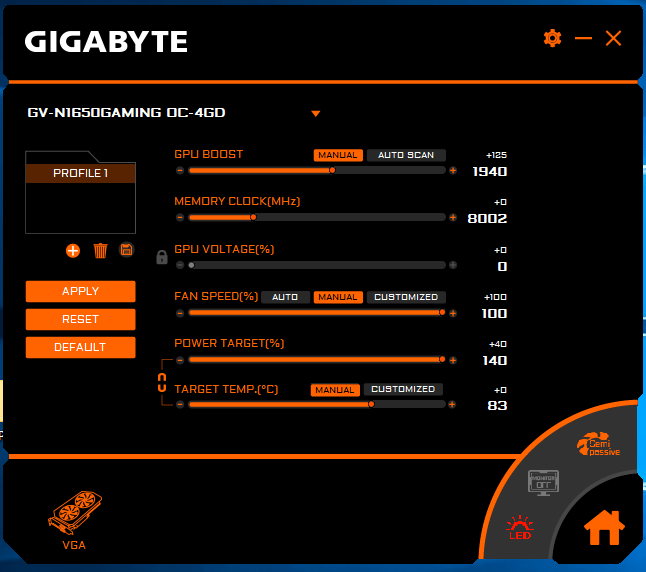 We increased the GPU Core speed on the Gigabyte GTX 1650 Gaming OC in hopes of better performance. With the Gigabyte AORUS Engine software, overclocking can be done easily. Also, with reference from the core clocks shown in the AUTO SCAN feature, we decided to increase the core clock from its default 1815MHz to 1940MHz. The frequency increase also resulted in higher performance of the card for games. However, while some games managed to surpass the 60FPS mark, most games still performed slightly below it. The good thing was that the graphics card was able to maintain such a high frequency well. It’s a win for the gamers who wishes to squeeze that few FPS out from their graphics card without trading off stability. 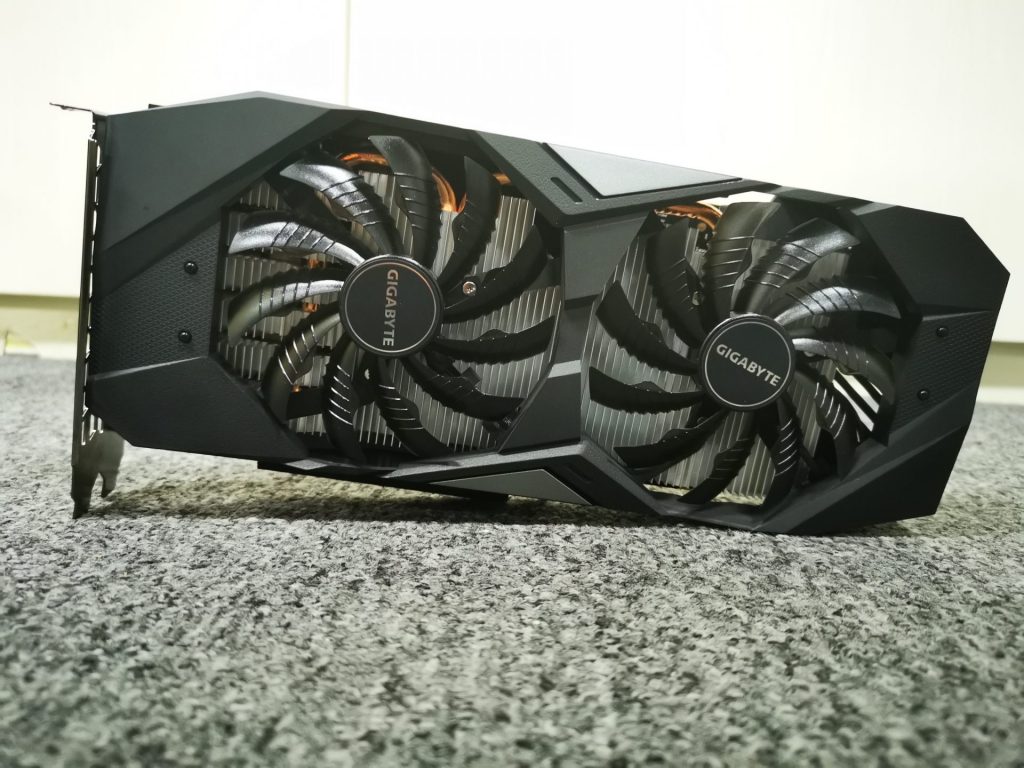 Judging that the GTX 1650 is about S$100 more that the GTX 1660, the purchase of the Gigabyte GTX 1650 Gaming OC may not seem that outrageous after all. In the end, it really matters the system builder’s budget. If all you want is smooth gameplay at 1080p resolution at high settings, then go for the GTX 1660. If you can live with medium settings, or don’t play too much graphics intensive games, the GTX 1650 will be good enough.

The Gigabyte GTX 1650 Gaming OC is a great graphics card for any gamers who are looking for something new, affordable and power efficient. It has a place in the market, but is just slightly lacking in terms of performance to be considered as acceptable. In our opinion, perhaps a previous generation graphics card from either the red or green camp could provide better performance at a lower price. Therefore, unless you are looking for something newer or more power efficient, it might be better to look for alternatives in the market.