AMD Radeon RX 6800 Performance Review – Can RDNA2 live up to its expectations?

Home » AMD Radeon RX 6800 Performance Review – Can RDNA2 live up to its expectations?

The new AMD Radeon RX 6800 series are based on the new RDNA2 architecture. Even though they are manufactured based on the same 7nm process node as compared to it’s predecessors, they are packed with significantly better performance. With the new graphics architecture, this leads to more efficient and graphics processing optimizations . 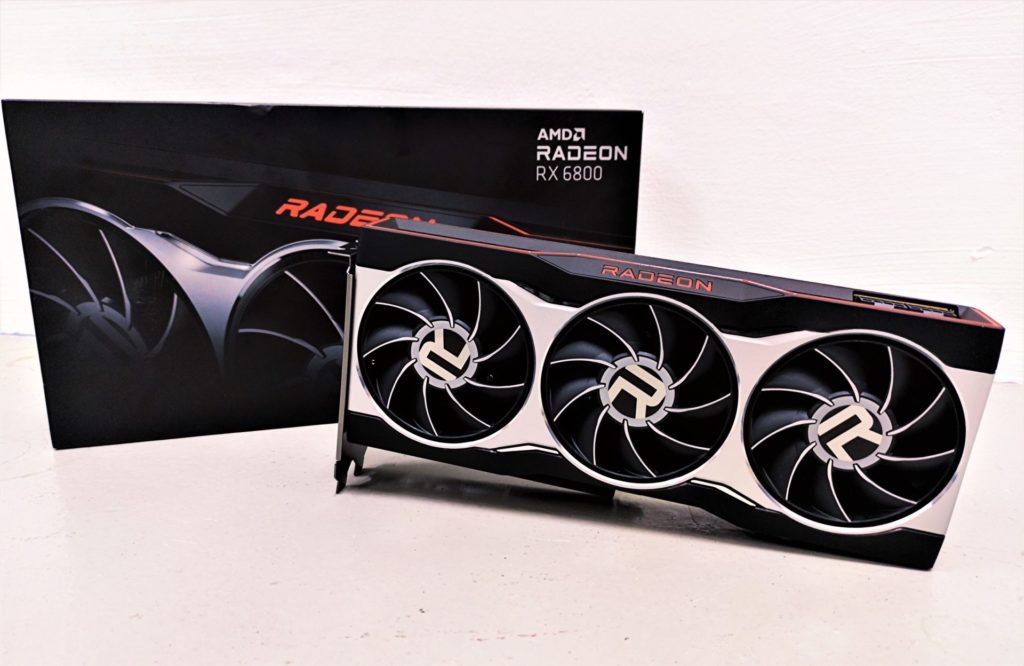 Since the NDA for the AMD Radeon RX 6800 series have lifted, we can finally share with you what the hype is about. We will focus on the the performance of the Radeon RX 6800 in games at various display resolutions, effects of AMD Smart Access Memory on our system, power consumption levels and temperature profiles.

Alternatively, if you looking to understand more about Radeon RX 6800’s design, ports, and specifications, please visit our “AMD Radeon RX 6800 First Look and Unboxing” article. We will also take a deep dive into the new RDNA 2 graphics architecture in a separate article in the near future.

Choosing the right graphics card in 2020 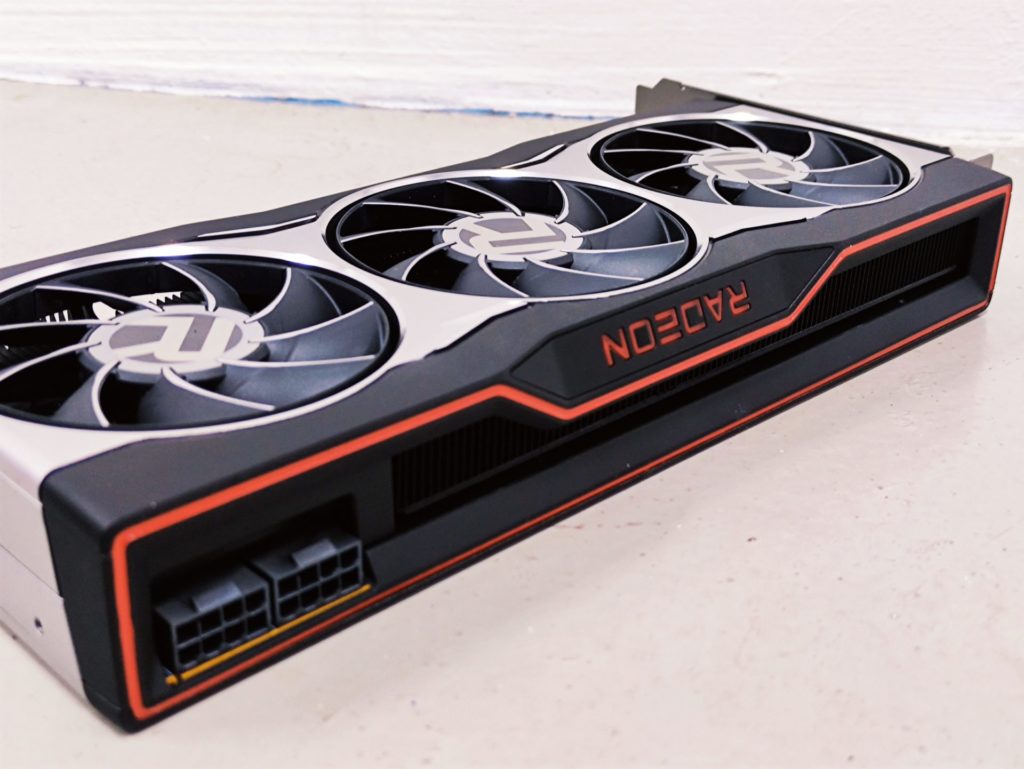 When choosing a new gaming graphics card, we typically want to make the decision based on the price and performance. We want to find out which graphics card can provide more value; whereby you pay less and have more performance. Here are the products that are available in the market right now from both AMD and their main competitor, NVIDIA:

Just to give a quick introduction (we will explain more in our RDNA2 deep dive article in the future), AMD Smart Access Memory enables the main system’s processor to access the full GPU video memory directly. Currently, processors can only typically access a small fraction of GPU memory (usually 256MB), resulting in a lot of inefficiencies in data transfers, thus limiting GPU performance. With AMD Smart Access Memory, the CPU can have direct memory access to the GPU’s VRAM, removing the bottleneck. However, do take note that Smart Access Memory is only compatible with a AMD Radeon RX 6000 series GPU with a AMD Ryzen 5000 series processor on a 500 series motherboard. 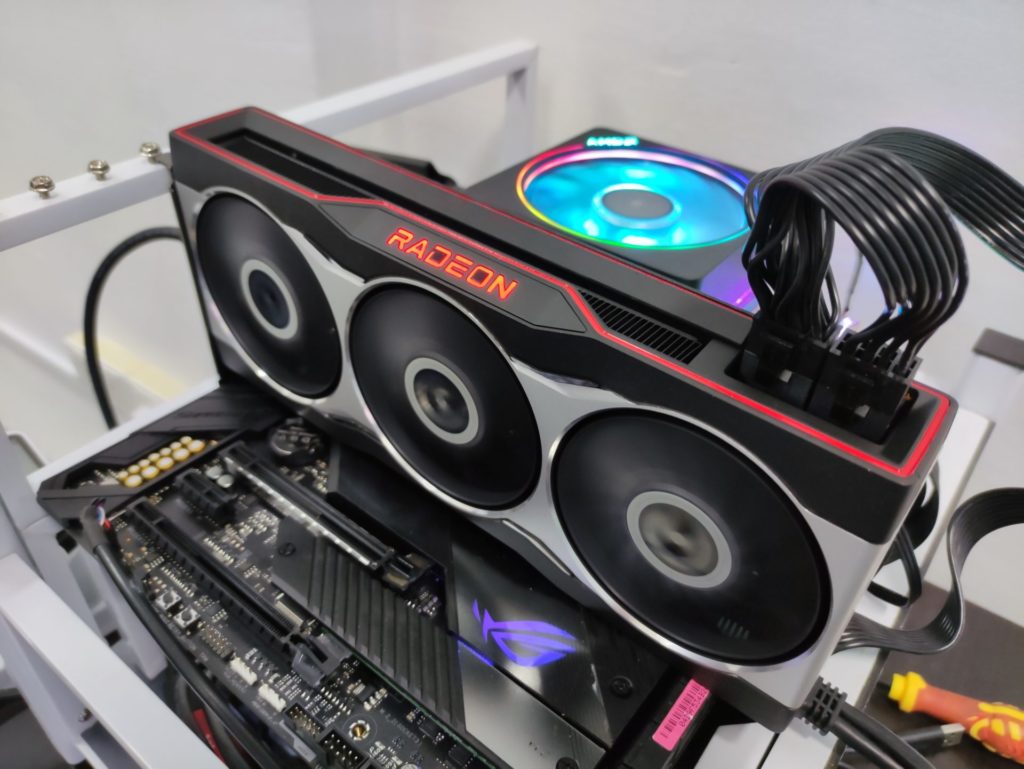 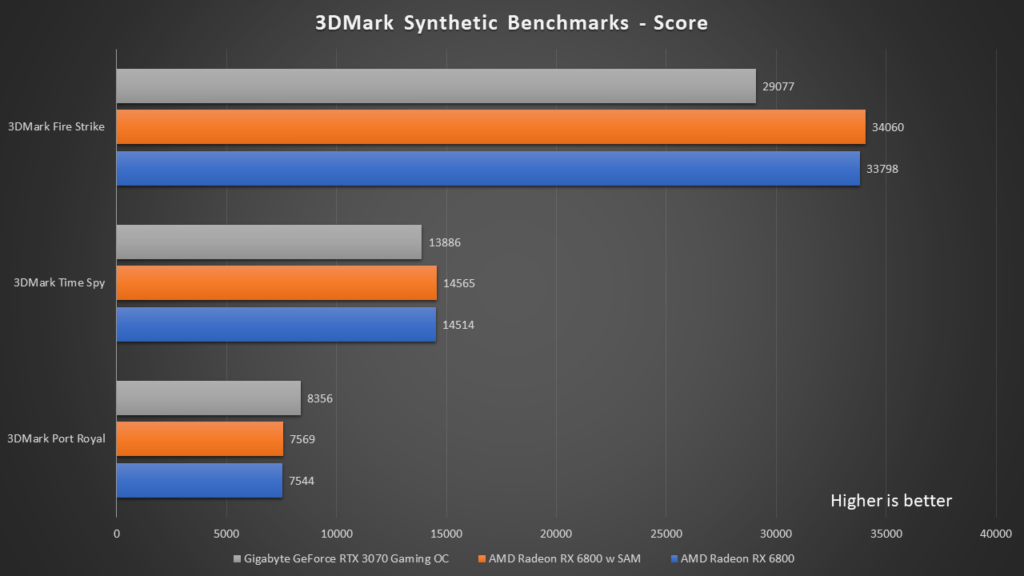 In the 3DMark Fire Strike and Time Spy tests, which focuses on DirectX 11 and DirectX 12 API respectively for graphics processing, we can see that the AMD Radeon RX 6800 comes out on top. By enabling Smart Access Memory, performance gains were also achieved, even though it’s not as significant as expected.

However, it’s clear in the tests that the AMD Radeon RX 6800 still loses out when it comes to Ray Tracing performance. This is shown in the 3DMark Port Royal test, which focuses on ray tracing. We will look into more details of both gaming and ray tracing performance of the RX 6800 below. It’s clear that the graphics card today handle 1080p resolution without breaking a sweat. It is hard to conclusively determine which is actually better but rather boils down to whether the games themselves are optimized to whichever graphics card’s architecture.

There are times where the AMD Radeon RX 6800 comes out significantly faster, but the RTX 3070 also has its fair share of lead as well.

Despite of the results, it’s certain that the AMD RX 6800 can run games in 1080p resolution extremely well. There’s just no doubt about that. 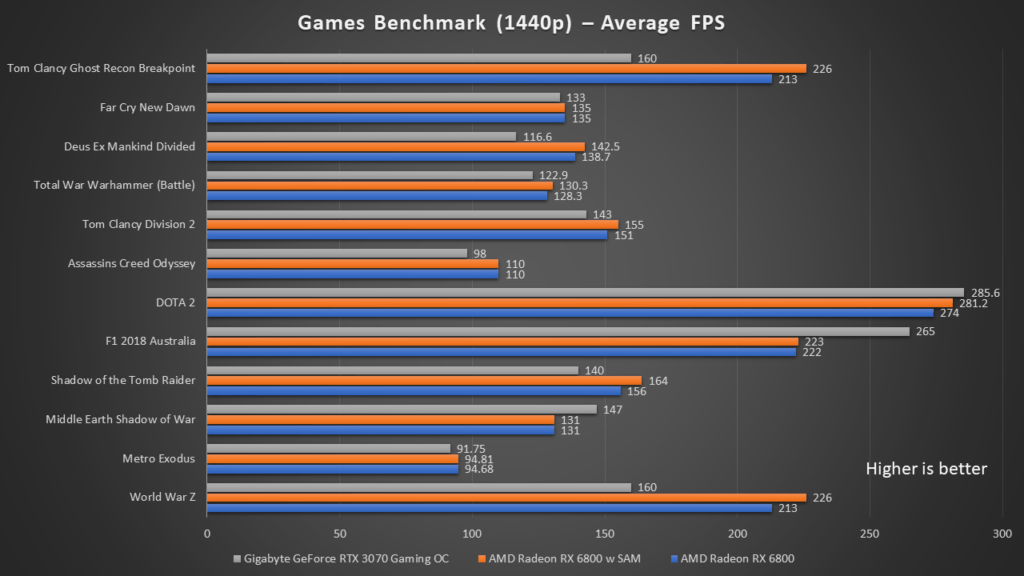 Moving up a notch, while playing games in 1440p resolution, the differences in performance results are more apparent. This time, in most of the tests, the the AMD Radeon RX 6800 comes out on top. Depending on the games played, enabling Smart Access Memory also resulted in a significant increase in performance. The difference in performance is shown in the 4K gaming test, as the AMD Radeon RX 6800 came out rather consistently on top. The performance gaps are rather significant, where Radeon RX 6800 had an advantage in more than 10FPS in quite a number of the games.

As the GeForce RTX 3070 only has 8GB of GDDR6 VRAM, it might not be enough to game at 4K resolution. On the other hand, as the Radeon RX 6800 has twice the amount of VRAM than the RTX 3070, it wasn’t limited by memory bottlenecks. This is where the amount of video memory equipped to a graphics card matters.

Moreover, we have only set graphic details to High for most of the games. If you were to increase graphics quality even further, you can expect a even bigger performance gap between these two graphics card. 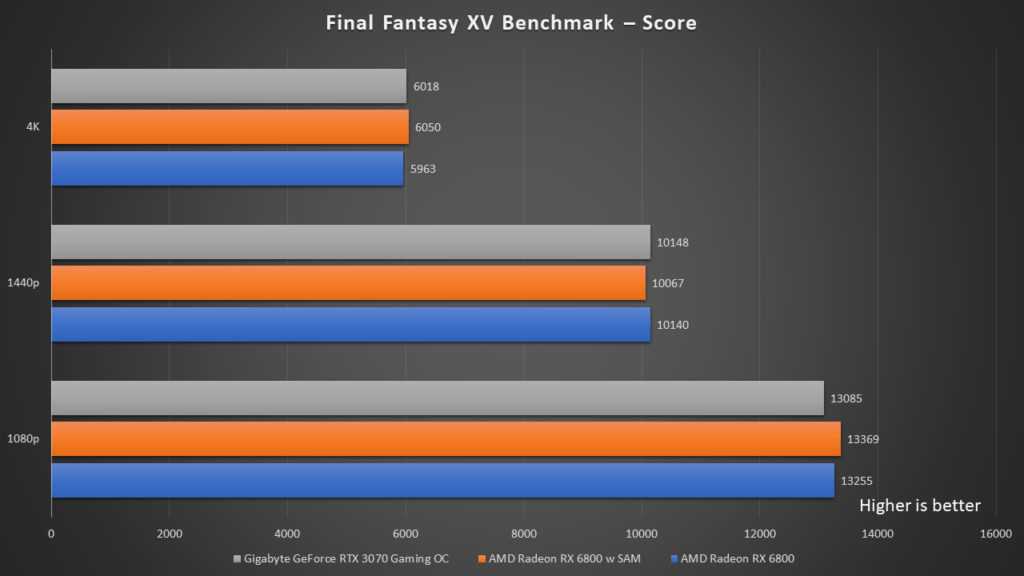 Performance results for the Final Fantasy XV and and World of Tanks enCore also showed similar results to the other games as well. With the launch of the RDNA2 architecture, it is the first time that Ray Tracing can be hardware accelerated on a AMD graphics card. However, AMD still has to catch up with the Ray Tracing performance of the RTX 3000 series graphics card. In the 3DMark DirectX Ray Tracing feature test, we can see the AMD Radeon RX 6800 trailing behind competition. 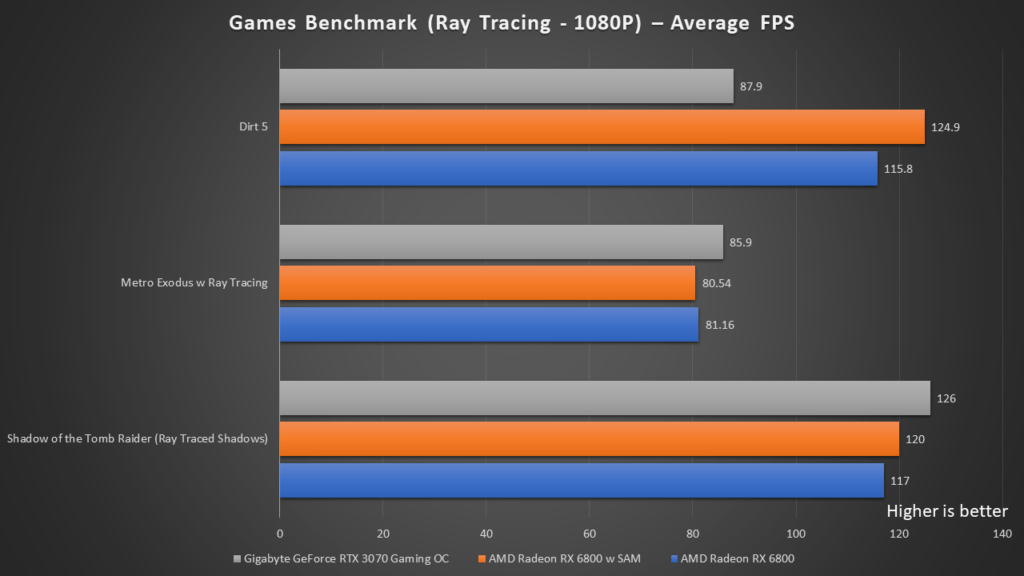 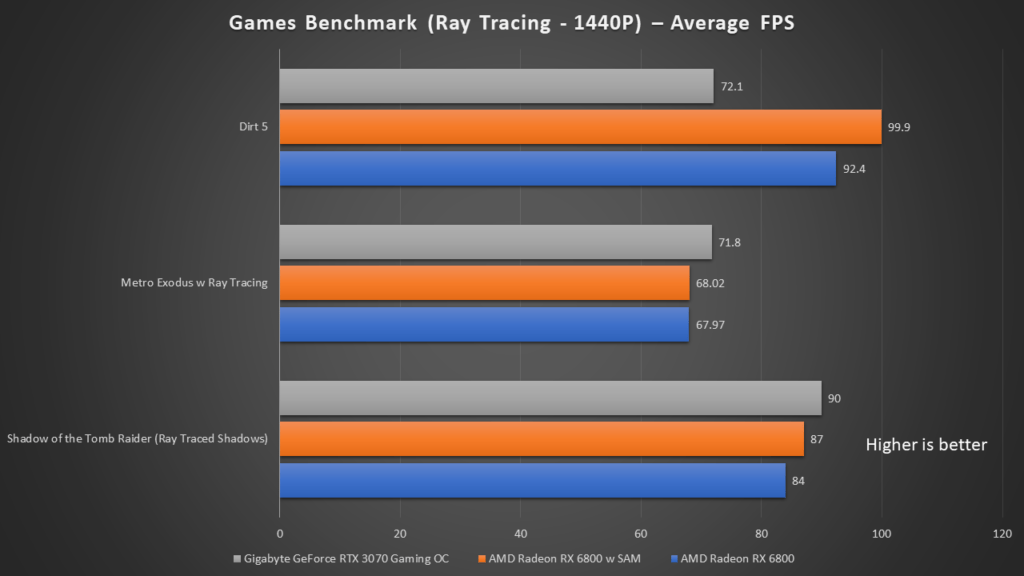 When on load, the AMD Radeon RX 6800 runs quite a bit hotter. We also took note that the RTX 3070 in our test today has a custom cooling solution, which is expected to perform much better than something that’s of a reference design. Of course, when AIB partners also design their custom cooler on the AMD Radeon RX 6800 series graphics card, we also do expect that the temperature of the card to be lowered as well. Gone were the days where AMD graphics card are known to be power hungry, poor performing and hot. With the release of the AMD Radeon RX 6800 graphics card, AMD has redeemed themselves and proved what the company is really capable of. What’s surprising is that the huge jump of graphics processing performance and capabilities are all done with the same process node as its predecessor. This means that most of the performance gains come mainly from GPU architecture improvements – that’s something that’s really commendable, and we applaud the team from AMD to achieve this feat.

However, coming back to the review, we must be honest and say that deciding to purchase a AMD graphics card now isn’t as straightforward what it was like a year ago. Previously, if you want more performance at a good price, AMD is the way to go. This time, because the NVIDIA GeForce RTX 3070 is priced lower, and yet still provides a comparable performance level when it comes to gaming in 1080p and 1440p resolution, it makes us think twice before making the choice.

Nonetheless, there is no doubt that the AMD Radeon RX 6800 is going to perform much better in 4K gaming as compared to the RTX 3070. Its 16GB of dedicated video memory positions the card to perform well in that area.

In the end, it should boil down to the prices of the graphics cards when it actually reaches the shelves here in Singapore. Perhaps, local pricing of the AMD Radeon RX 6800 from AIBs would be similar to the RTX 3070, making it clear for us on which card to choose. If just based on my opinion, I’d purchase the Radeon RX 6800 if I game on a 1440p or 4K monitor. If gaming on a 1080p display, a graphics card that’s more affordable will make more sense.

Samsung’s most affordable 5G smartphone to launch in Singapore