When AMD first introduced support for PCIe 4.0 in their X570 chipset at COMPUTEX 2020 last year, many manufacturers started to release new PCIe Gen4 based SSDs into the market. Particularly, we have tested the GIGABYTE AORUS NVMe Gen4 and Seagate FireCuda 520 SSD which were shown to perform superbly. They were dubbed as some of the fastest consumer SSDs in the market, being able to utilize the additional bandwidth provided by PCIe 4.0 interface.

We have gotten our hands on the 500GB version of the Samsung 980 PRO. This M.2 SSD comes in a rather simple design, with all components only appearing on a single side of the PCB. The back of the PCB is bare, which could possibly aid in ensuring that the SSD remains cool for optimal operation.

The Samsung 980 PRO is equipped with a S4Lv003 controller, which is built in-house. This controller is also known as “Elpis”, and is custom designed just for the 980 PRO. Additionally, Samsung also designed this SSD with a 512MB LPDDR4 DRAM for improved performance. The K4F4E3S 4HFBGCH chip is also made by Samsung (as seen on the SEC naming on the chip – Samsung Electronics Co).

As for the NAND storage flash, Samsung is also using their own TLC V-NAND, which is a 3-bit MLC. Two of these NAND flash chip are found, which also means that they are 256GB each. Samsung has probably also rated this SSD at 500GB, as the missing 12GB is used for over-provisioning.

While Samsung claims that this drive can deliver speeds of up to 7,000MB/s, we know that we must get our hands on this SSD to verify their claims. Moreover, the performance of a SSD is much more about practical usage than just raw sequential read/write performance. We need to run through multiple tests to fully understand how it compares to the competition.

In this review, we will put the Samsung 980 PRO up against both the GIGABYTE AORUS NVMe Gen4 and Seagate FireCuda 520, so as to understand where this new product from the almighty Samsung stands. 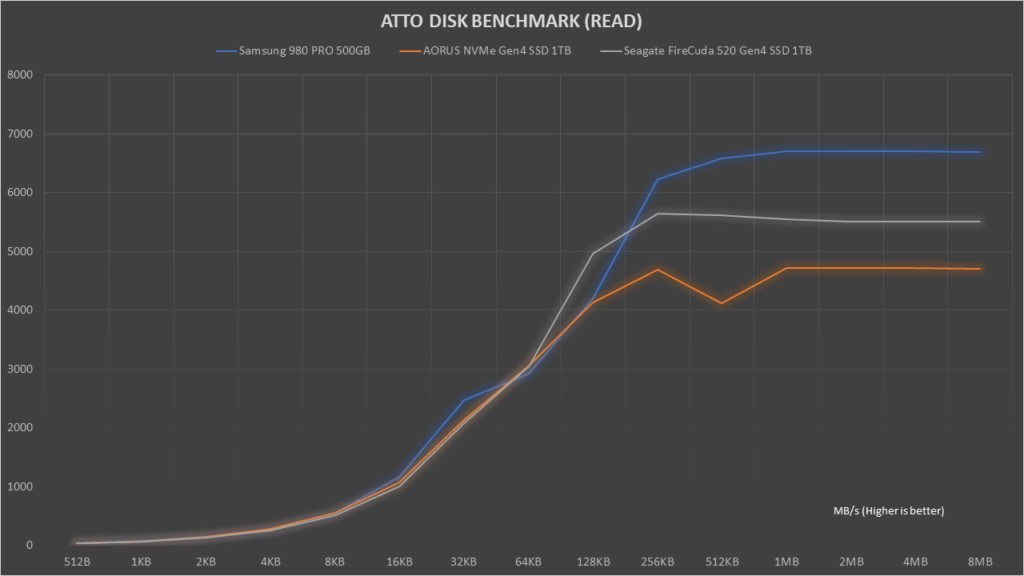 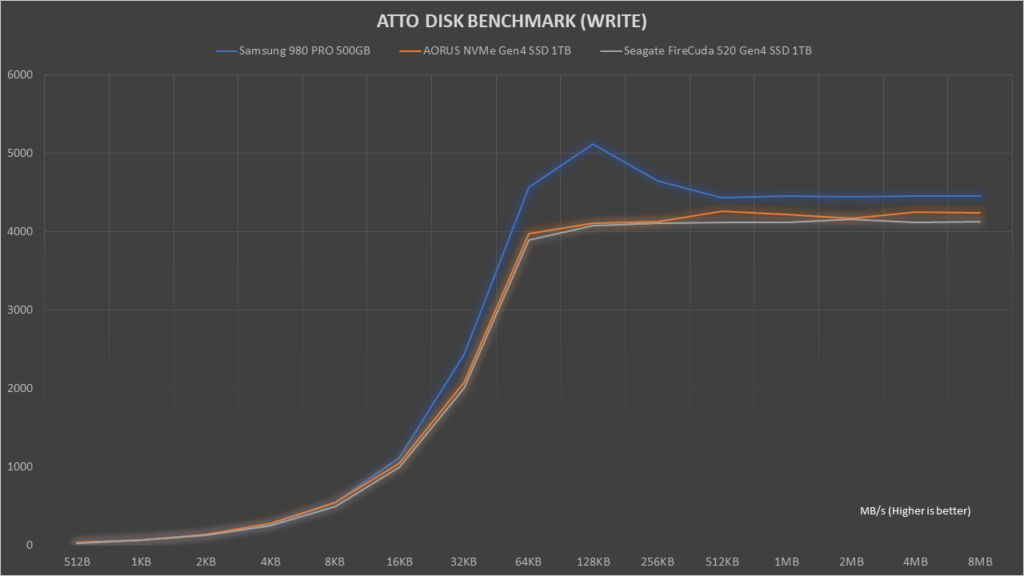 The Samsung 980 PRO’s performance looks very well in the ATTO Disk Benchmark, as it has shown its raw performance when reading and writing data to and from the SSD. Just on sheer sequential read and write, we can see that this SSD can reach speeds that the other SSDs could not reach. We have to also take into consideration that the Samsung 980 PRO we have on hand is a 500GB model, while the other two competing products are 1TB models. 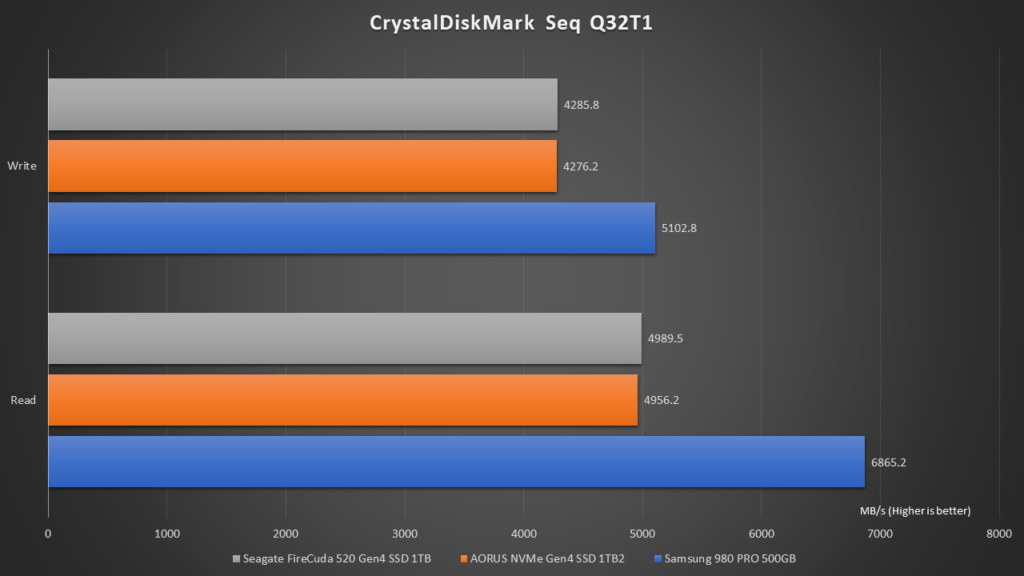 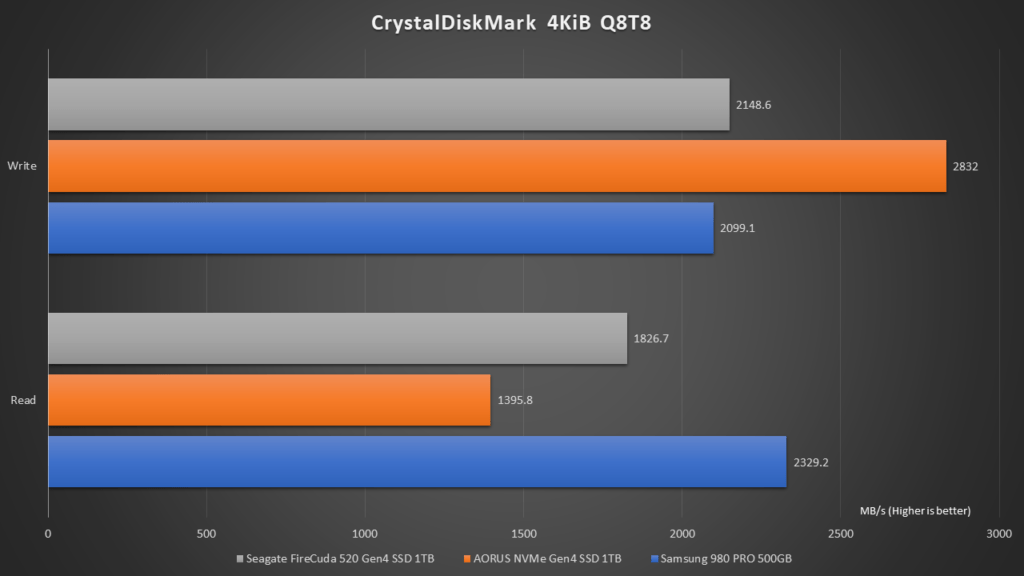 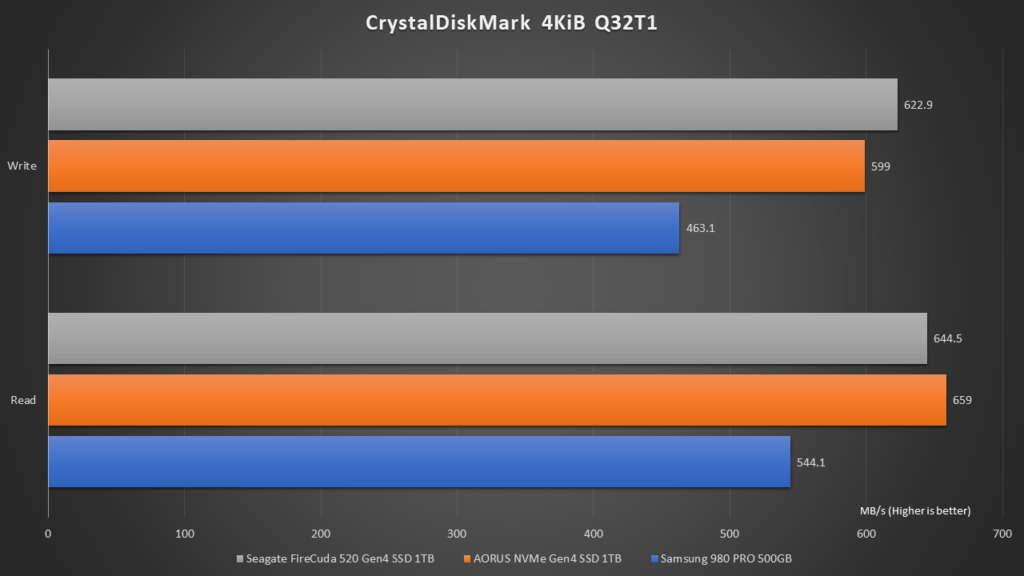 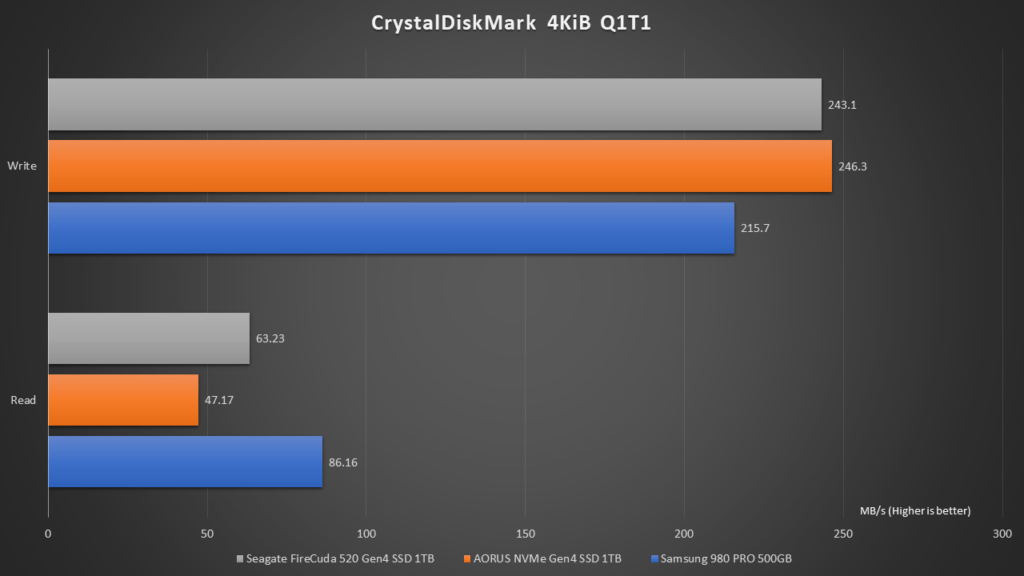 However, things aren’t as rosy when we tested the drive with random read/write operations. While the drive still performed very well, we could see that it was lacking behind the AORUS and Seagate drives under the above workload settings. 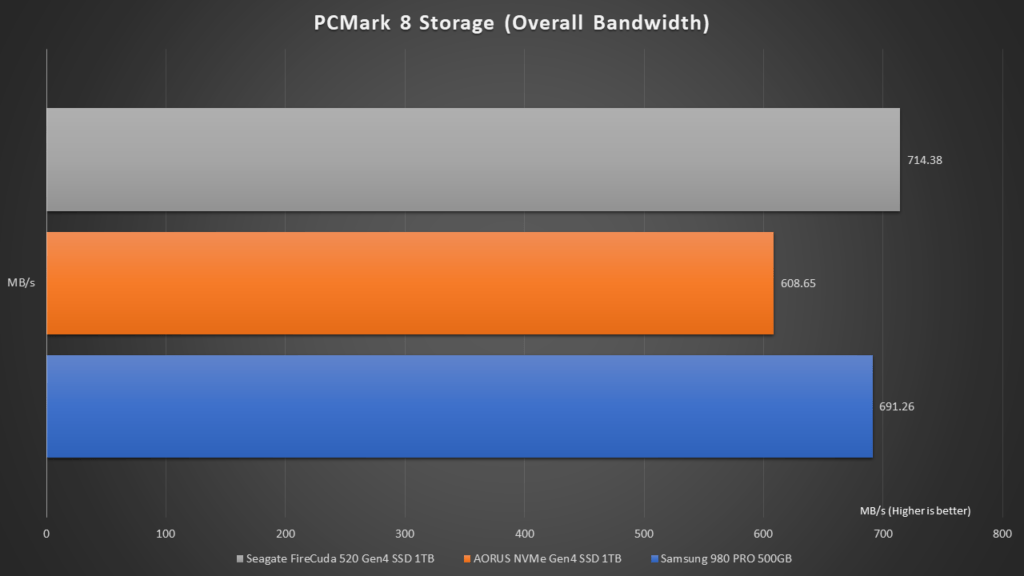 PCMark 8 Storage puts the SSD to the test by running different kinds of applications. Overall, it had the Samsung 980 PRO performing between the Seagate FireCuda 520 (faster) and the AORUS NVMe Gen4 (slower).

While the Samsung 980 PRO could really reach very high maximum speed that other SSDs could not attain, its high performance was not replicated across different types of SSD storage operations. There are times when the Samsung 980 PRO performed well, but also times where it lacked behind. Despite it being a PCIe Gen4 SSD, and coming from a very reputable brand, we cannot conclude that it is the fastest SSD in the market. Perhaps, Samsung also didn’t create the 980 PRO to take the crown of performance in SSD, but rather just as a new product to properly compete in the market.

We must also say that despite certain small shortcomings in performance, the Samsung 980 PRO SSD is still an extremely fast SSD drive, surpassing the performance of many other competing products in the market. Furthermore, the SSD is also very competitively priced, making it a sensible choice for many who are seeking for a new PCIe Gen4 SSD.