The competition in the graphics card race is heating up. While the high performance/high resolution gaming graphics card market is largely dominated by NVIDIA, AMD is making strides in the mainstream graphics card segment. Understanding that a majority of gamers game on 1080p, AMD has decided to focus their efforts into pushing products for this audience. Following on the Radeon RX 5500 XT launched last month, here comes the new Radeon RX 5600 XT.

AMD is positioning the Radeon RX 5600 XT as the best graphics card you can get for gaming at 1080p resolution. In Singapore, the Sapphire Pulse Radeon RX 5600 XT retails at S$440. This places the card in price range similar to a custom factory overclocked GTX 1660 SUPER. So which card will perform better? 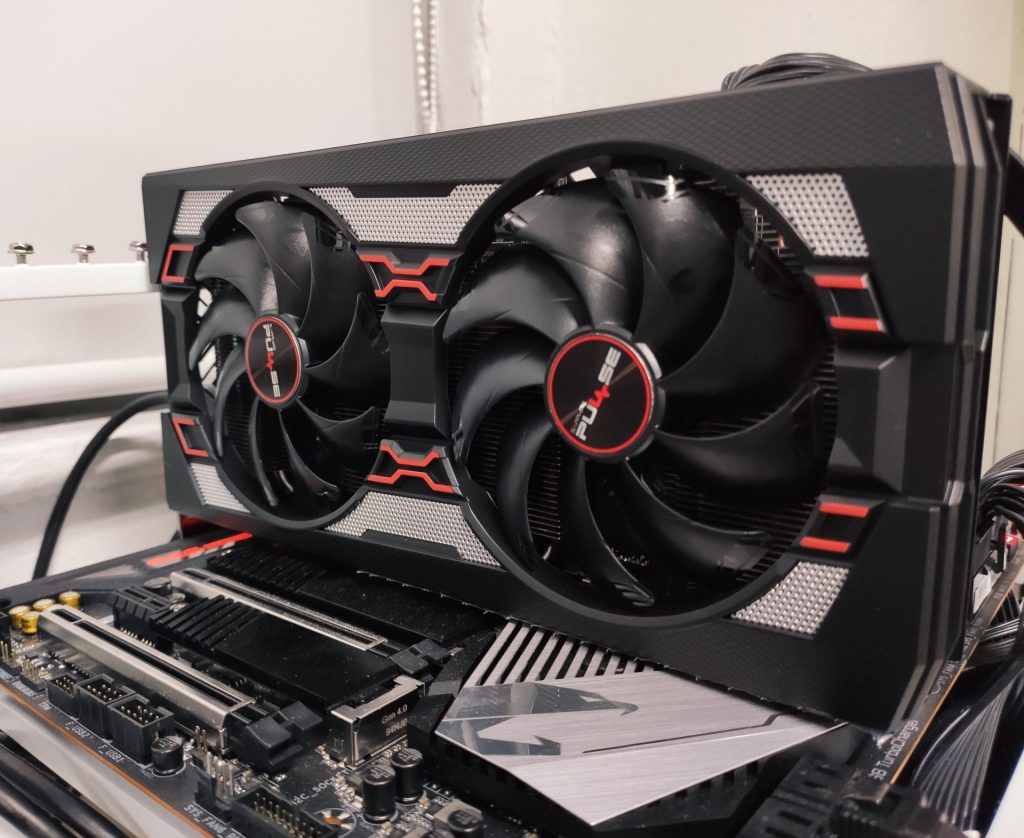 Particularly for the Sapphire Pulse Radeon RX 5600 XT graphics card in this test, there are two new vBIOS available. They are known as the Performance BIOS and Silent BIOS. As the name suggests, the Performance BIOS have higher game and boost clock, and would bring out the best possible performance on this card. On the other hand, the Silent BIOS aims to keep the whole system quiet with reduced fan speeds.

How to Update vBIOS

While most of the AMD Radeon RX 5600 XT on sale today will have their vBIOS already flashed to the latest version with improved performance, there is still a handful from the initial batch which was shipped with the old vBIOS. AMD has worked with AIB partners to roll out the latest vBIOS to consumers via the individual graphic card’s official support page.

In the case of the Sapphire Pulse RX 5600 XT, the information on the vBIOS is already online. Users can follow the instructions provided on each manufacturer’s site to upgrade their vBIOS to the latest version, unlocking the real potential of the RX 5600 XT.

We will be running our standard suite of synthetic graphics and gaming benchmark tests to understand the performance difference between the RX 5600 XT, RX 5700, as as well the GTX 1660 SUPER. Particularly for the RX 5600 XT, the same tests will also be iterated three times, but with different vBIOS (original(stock)/silent/performance). By comparing between their test results, we aim to arrive at answers to these questions:

The specifications of our test bench is as such: 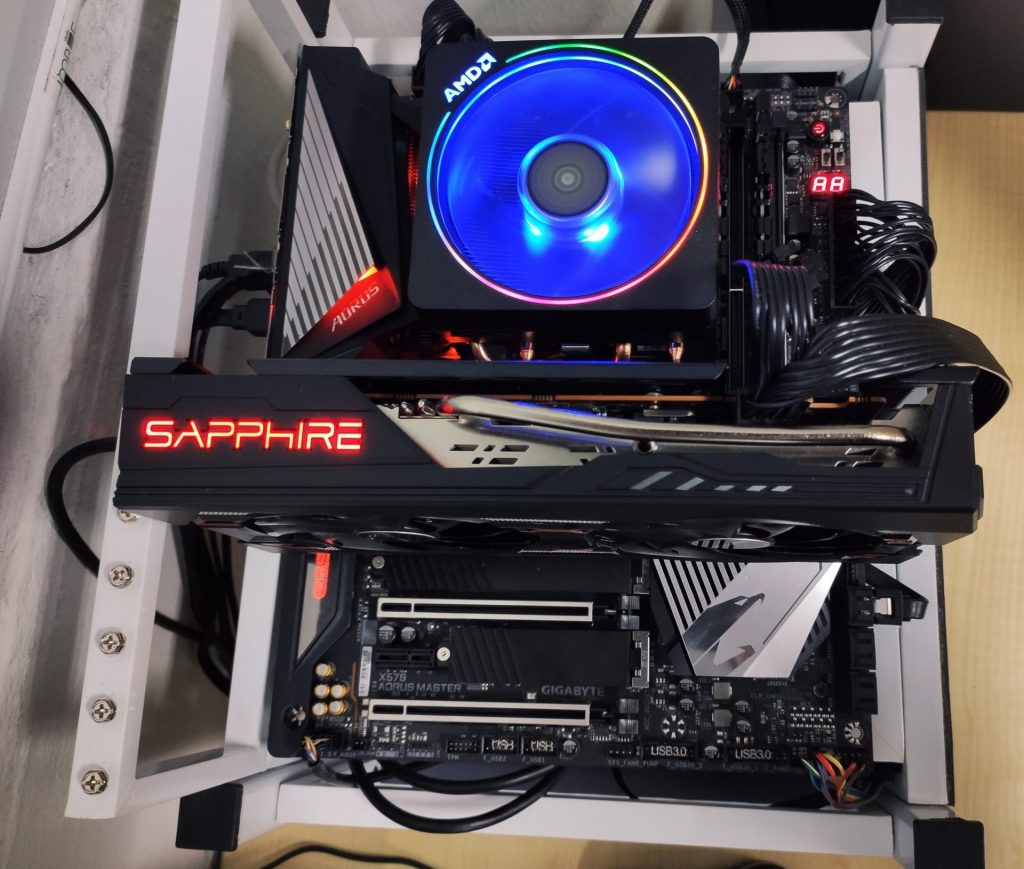 The following benchmarks and performance tests will be executed in the settings stated below. All tests are conducted with 1080p resolution. 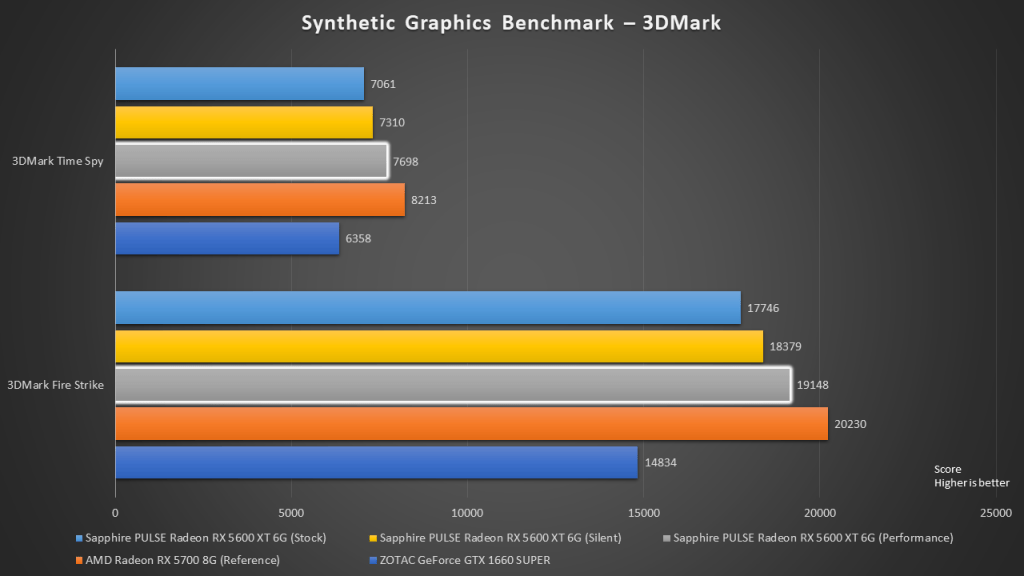 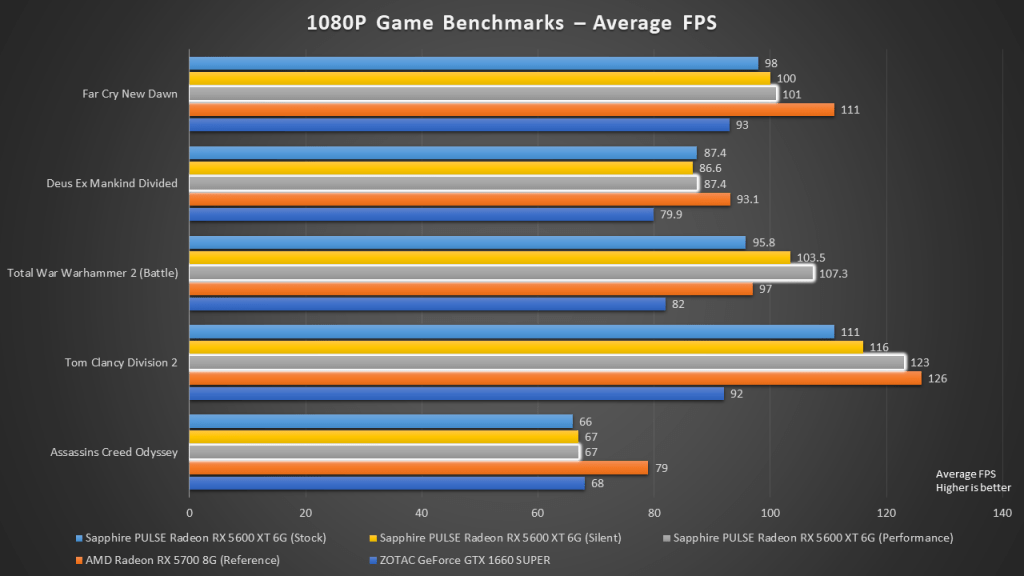 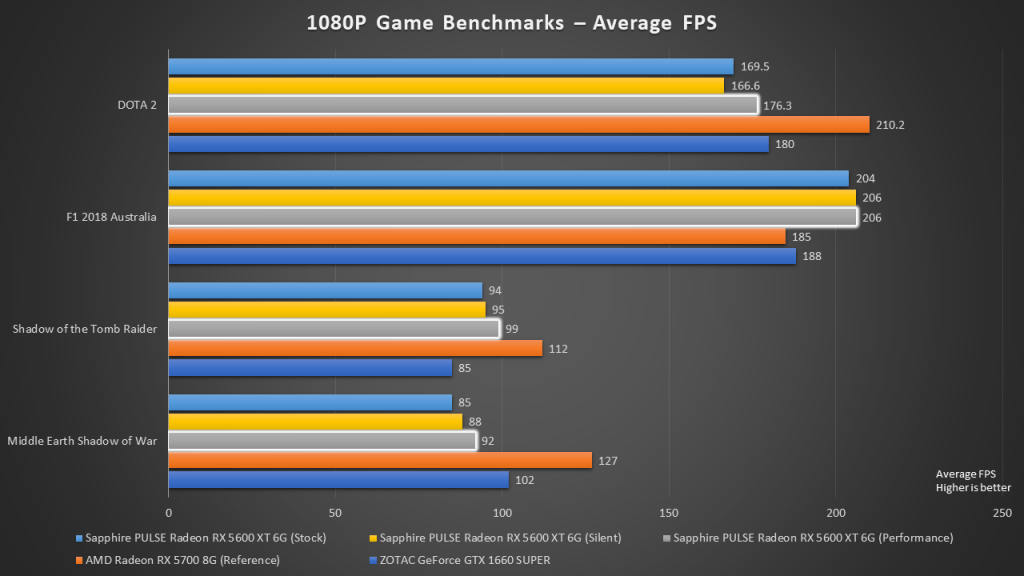 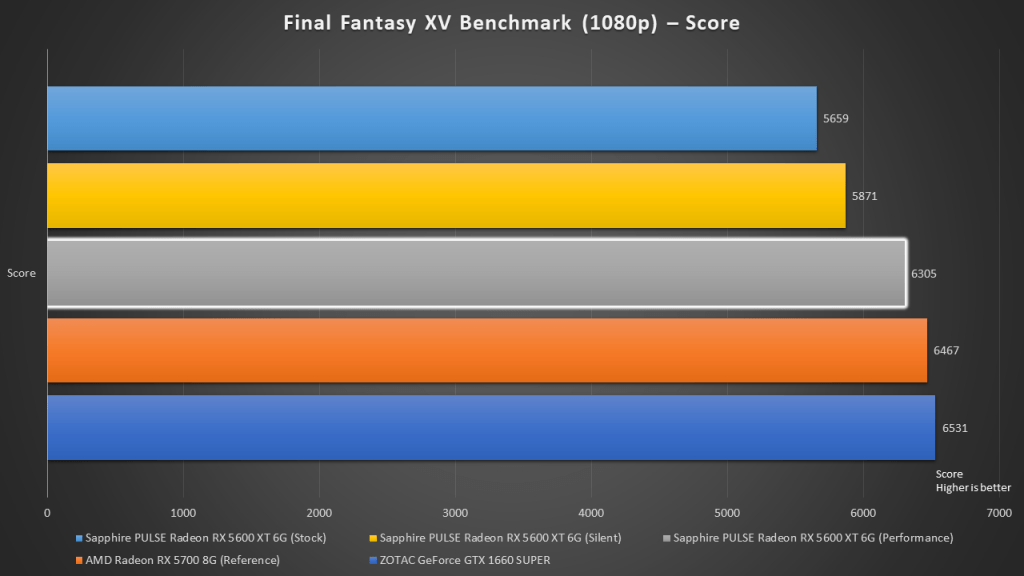 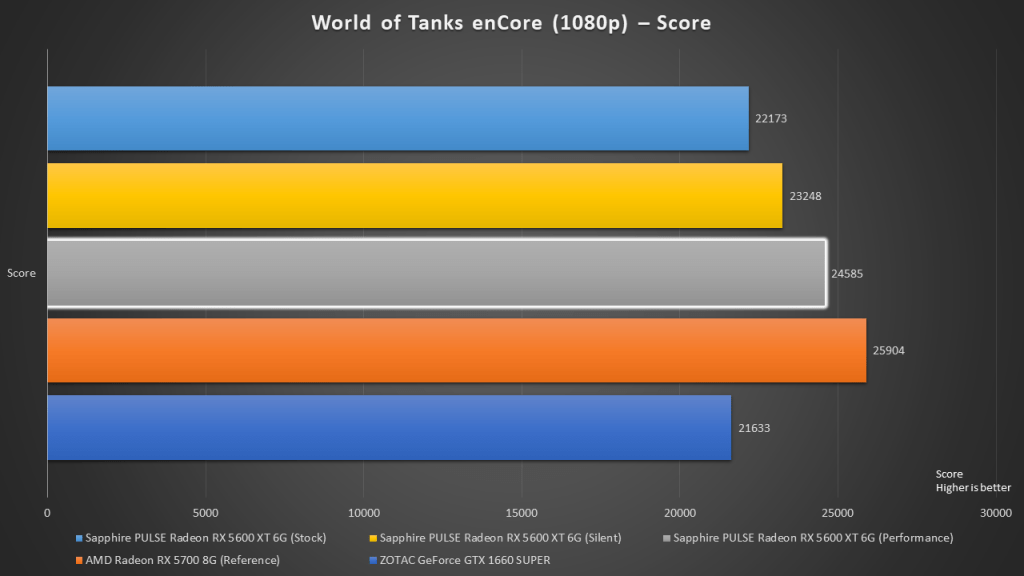 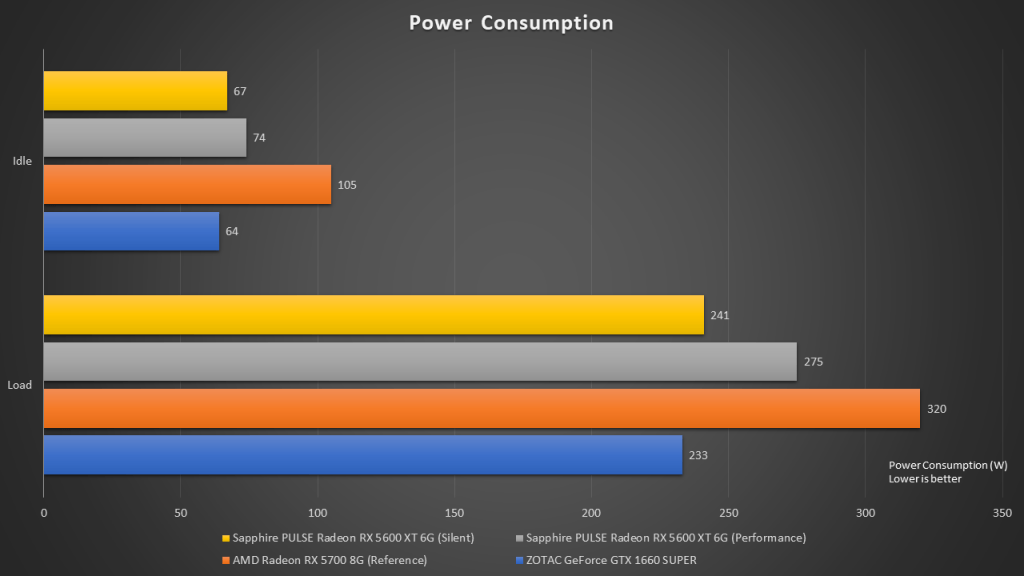 The Radeon RX 5600 XT that’s  flashed with the performance vBIOS had a higher TDP at 160W compared to 135W for the slient vBIOS. As expected, we are seeing a higher power consumption on the card flashed with higher clock speeds than one that aims to run silently. Depending on the usage of the RX 5600XT, you should flash the most appropriate vBIOS accordingly.

Despite having a 7nm advantage, the RX 5600 XT consumed more power than the GTX 1660 SUPER. This comparison also tells us that AMD could have done better to optimize their graphics card to make it more efficient. 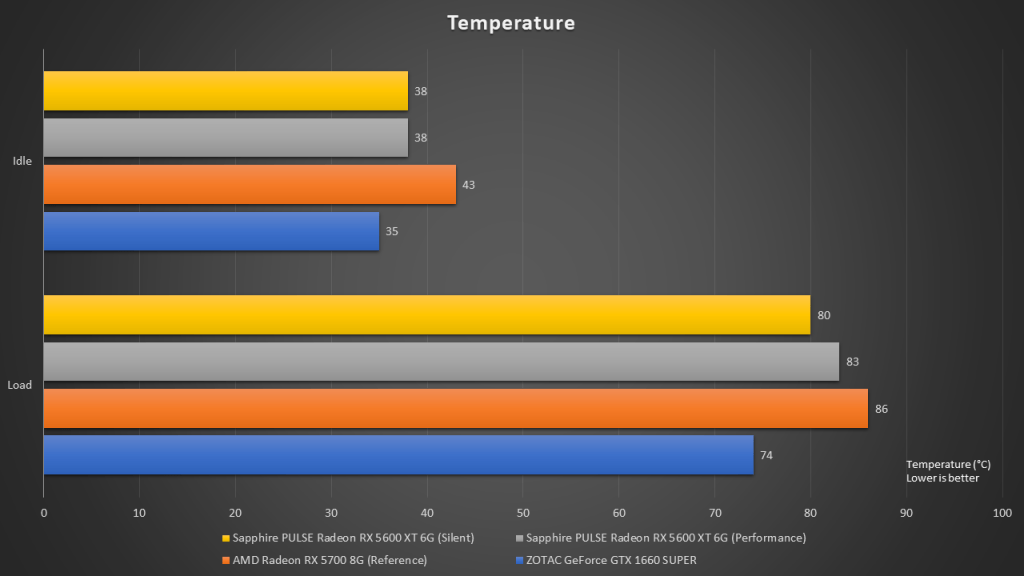 The Sapphire Pulse RX 5600 XT is considered to be well equipped with a decent cooling solution. Even so, the temperature of the card when on load is shown to be higher than the GTX 1660 SUPER. This tells us that much of the power consumed is converted into heat directly. This is energy wasted to the environment, instead of properly utilized by the graphics card.

As for the RX 5600 XT, when on load, the graphics card reaches a maximum of 83 degree celcius. While there are still some slight head rooms for overclocking, we are already more than happy with the performance of the RX 5600 XT.

The AMD Radeon RX 5600 XT performed very well in the suite of benchmark tests. In most games and tests, the RX 5600 XT was able to take the lead when compared to the similarly priced GTX 1660 SUPER.

Despite being significantly cheaper, RX 5600 XT’s performance also comes close to the higher tiered RX 5700. If budget permits, it would be a no-brainer to choose the RX 5600 XT for gaming at 1080p, as it brings more value for each dollar paid. However, it must be noted that the RX 5600 XT’s memory configuration may not be sufficient for gaming at a higher resolution. This is where the Radeon RX 5700 series shines.

AMD’s strategic decision to include a new vBIOS for the new Radeon RX 5600 XT has allowed the product to stand out from the crowd. It has made it easier for consumers to choose the right graphics card for their needs.

With a strong product lineup and new features released in Radeon Software Adrenaline 2020, there is no doubt that AMD is really back in the graphics card game. We’ll have to wait and see what other surprises that the company is going to offer, particularly in the high performance graphics card segment.