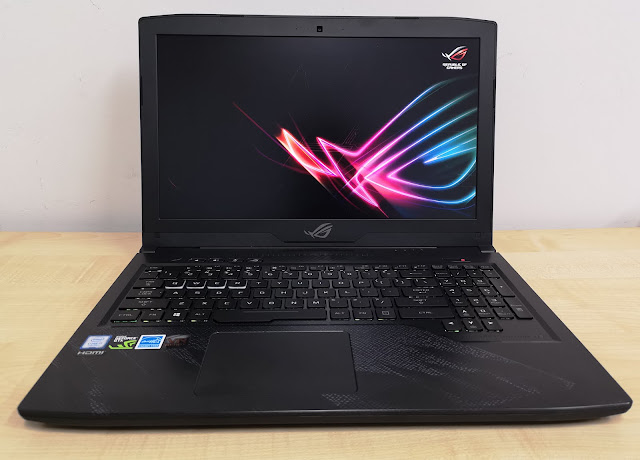 Priced competitively in the mid-to-high range of gaming laptops (SGD 2698), the ROG Strix Hero Edition has the expected specs of a laptop near the $3000 price range. Flaunting its components and its gaming design, the Hero Edition does look good on paper. Let us find out if it has aged well since its release, with its next refreshed model looming on the horizon.

I/Os That Got You Covered

With the annoyance of dongles becoming a norm in the recent years, not just in laptops but also in smartphones, ASUS’s ROG Strix throws that out of the window with its I/O ports being plentiful for your choosing. Here is a brief look at what it has.

Weighing in at a decent 2.5kg, the Hero Edition is surprisingly portable for a gaming laptop at this price. Although it cannot compare with other ultra-slim laptops in terms of weight and thinness, the ROG Strix is built to perform. 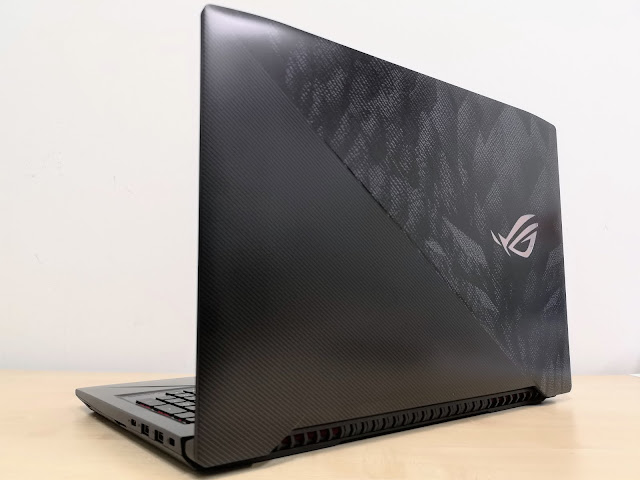 CPU
It houses Intel’s 7th Gen Core i7-7700HQ which comes with four processing cores and Hyper-Threading. This means respectable performance when it comes to typical workloads and gaming, as you will get to see later. However, its capabilities will be overshadowed by Intel’s latest release of its 8th Gen CPUs which features 2 more physical cores, bringing a theoretical increase in performance of 50% with improved multitasking. We are expecting a refresh of the ROG Strix lineup in the near future, just like the Zephyrus and its younger brother – the Zephyrus M.
Graphics Card
In the graphics side of things, the laptop comes with Nvidia’s GTX 1060. This particular graphics card features 6GB worth of GDDR5 VRAM, which is overkill when it comes to gaming in the 1080p resolution. What is not overkill is the high performance needed to hit a stable 120 frames per second (fps) to be able to make full use of its 120Hz display. Unfortunately, its display does not come with G-Sync, so some tearing is to be expected.
Storage
The storage capabilities of the Hero Edition do mirror the ones that DIY PC builders typically have. One fast storage medium (SSD) for the OS and some games, and a slower but cheaper HDD for storing media. Like the former, it uses a 128GB M.2 NVMe PCIe 3.0 x4 SSD for extremely fast loading of games, and a reduction in stutters. (which occurs when the game is streaming in textures from the storage)
Although, one concern would be its capacity as it might not be large enough to store multiple games in at once, with games possibly taking over 50GB these days. Thankfully, the target audience for this particular laptop is MOBA players, and most MOBA games do not take up as much storage (e.g. Dota 2 and Heroes of the Storm).
The Hero Edition also comes with a 1TB Seagate FireCude SSHD for other work and media related usage, which is faster than the typical HDD to say the least.
Cooling
With all these power-hungry components, there is bound to be some heat produced. The heat is also magnified when housed inside in a laptop, where there is lesser airflow due to tighter fit of its components. Thankfully, the smart placement of the exhaust port and its heat-producing components are positioned near its rear, keeping the heat away from its user. Its 12V fans are also able to provide the much-needed flow of air circulation to its internals. 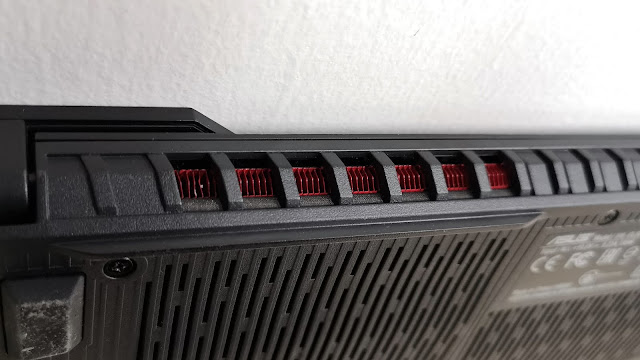 With all things said, the ROG Strix Hero Edition does cover most use cases apart from gaming. Need something portable enough, while needing the horsepower for video editing? The i7-7700HQ and GTX 1060, together with its IPS display graded with 100% sRGB gamut will help you to get the job done. Want to do some gaming on the side? It has the components to handle most games at the highest settings. This laptop trumps other ultrabooks in most aspects.

To make full use of its 120Hz display, games have to run at a stable 120fps or above. To put the machine to the test, we fired up two of the most played MOBAs in the market – Dota 2 and Heroes of the Storm. 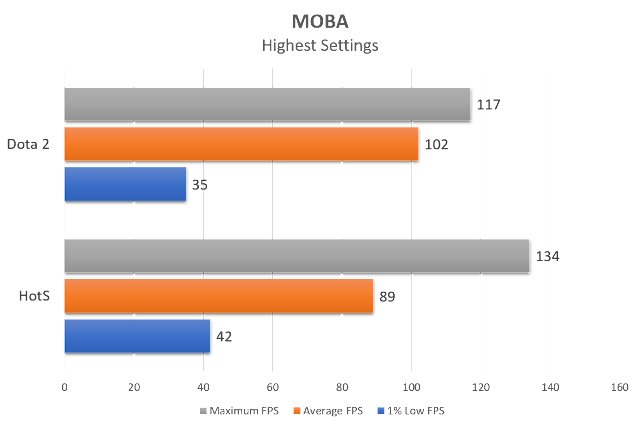 At the highest settings, the Hero Edition manages to go well beyond the 60fps mark with the average fps nearing the 90-100 zone. However, it was unable to achieve a stable 120fps without lowering some graphical settings. Even then, the display’s high refresh rate was able to help the laptop redeem itself as the games still felt more responsive than when playing on a 60Hz monitor.
Just for kicks, we also fired up some AAA games just to have a sense of how well the machine performs in demanding games. 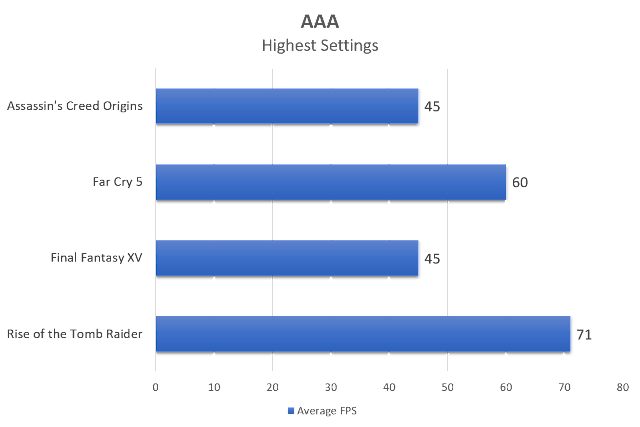 As expected, the Hero Edition is able to (barely) handle games that murders even the highest end of PCs. If you are intending to play more demanding games, apart from MOBAs, lowering some graphical settings should allow the laptop to run these games at a stable 60fps.

What Makes This Special?

At first glance, the ROG Strix Hero Edition on paper looks like a mid-end gaming laptop that can hold its own when it comes to gaming. Some may gloss over its 120Hz display, but it really affects how the laptop feel. It makes not only gaming but also any interactions with it a lot smoother, as compared to other typical laptops with the typical refresh rate of 60Hz. It is also able to keep heat away from the user with its thermal design, allowing for a comfortable gaming experience through and through. 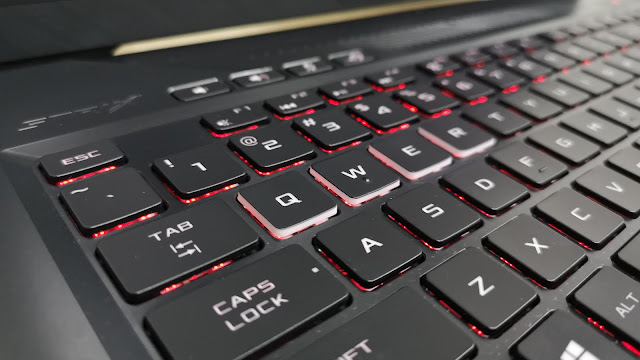 However, what really gives the Hero Edition its unique flair is in its keyboard, specifically its highlighted “QWER” keys. This makes the re-placement of your fingers a lot quicker, which can save you precious seconds in the competitive eSports scene of MOBAs.
All in all, ASUS’s ROG Strix lineup is well-designed to perform in gaming scenarios as well as other demanding workloads. You will be getting what you paid for, but it would be best to wait for the next iteration as Intel’s latest 8th Gen Core i7s is right around the corner.
For the LATEST tech updates,
FOLLOW us on our Twitter
LIKE us on our FaceBook
SUBSCRIBE to us on our YouTube Channel!