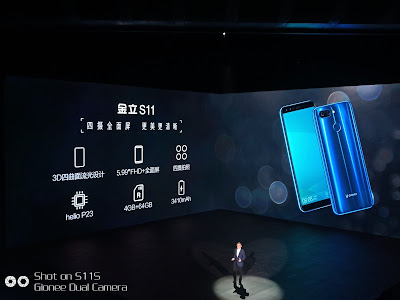 2017 has been the year of bezel-less, full-screen display
phones, with every handset maker unveiling at least one product with an
edge-to-edge display. However, with its recent launch of eight new products,
Gionee has become the first smartphone manufacturer to offer a dazzling
FullView display on all of its new handsets. This smart strategy puts the
company at the forefront of the industry’s most
significant technological innovation in recent years.
FullView’s Broad
Appeal
Gionee’s
FullView* display – now available on its new S11 and S11 lite, the latest
generation of its popular international S-Series – provides a more satisfying
interface for watching videos, playing games, browsing the Internet, reading,
taking and sharing beautiful photos. With a 5.99-inch, FullView display with 18:9 aspect
ratio and 2160×1080 resolution, S11 has a higher screen-to-body ratio and
bigger vision than most competitor models. The S11 lite has a 5.7-inch, 18:9
FullView display with 1440×720 resolution that is impressive in its own right.
Designed
for the smartphone generation
FullView display is expected to attract many new and
returning customers to the brand in both China and global markets. The
competitively priced ￥1,799 (S11) and ￥1,299
(S11 lite) will appeal especially to tech-savvy young consumers who think of
smartphones as not just a necessary device, but also an extension of their
personality. To better meet their needs, Gionee has equipped both phones with
technologies and features that better enable things like taking beautiful
selfies and sharing with friends on social media, all while looking like a
style icon.
Say No to Same-Same Design
As impressive as Gionee’s
FullView display is, its seamless integration with S
Series’ attractive and fashionably slender body
design helps it stand out in a market crowded with boring “same-same” designs.
S Series’ curved body shape perfectly fits in
the hand, providing a secure sense of grip. You won’t want to let go of it.
Crafted
using nine types of manufacturing innovations, including a 20-step engraving
process with micro- and nano-level surfacing, the body
surface reflects light with prismatic 3D effects that dazzle the eye. Moreover,
these models are finished in attractive, on-trend colors. S11 is available in blue, gold and rose gold finishes,
and S11 lite comes in dark blue, black and gold.
Taking Selfies to the Next Level of S11’s “Beauty-4”
If you want your selfies to win the Internet, you need a
phone with pro-shooter capability. To that end, Gionee equipped the S11 with
its flagship Beauty-4 camera that includes 16MP + 8MP dual camera in the front,
16MP + 5MP dual camera in the rear and real-time hardware-level bokeh that will
recognize you as the object and blur the background, like it was taken by a
portrait photographer.
The new
function Group Beauty Selfie on S11 supports face beauty and offers everybody
facial enhancement, while allowing more people to join the selfie.
Meanwhile,
S11 lite offers 13MP + 2MP dual camera in the rear, and has a 16MP selfie
camera in the front that can realize the bokeh effect through the software
algorithm, delivering shots that are sure to attract a lot of ‘likes’.
S11’s camera capability doesn’t stop with selfies. With
intelligent shooting scene recognition and automatic switching between
ordinary, HDR and night modes, you can shoot in a backlight environment
outdoors and the background will be crisp, the outline of the subject will be
clear and the light on the face will be soft. It’s easier than you thought
it would be.
Knowing
that people and objects aren’t always close, Gionee also equipped
S11 with Crystal Clear Zoom, which ensures far away objects are still clear.
Personalization
goes ‘next-gen’ with it’s amazing Gionee Amigo 5.0
Worried
about security? You’re not alone. Thankfully, S11 and S11 lite are equipped with
Gionee Amigo 5.0, an intuitive user interface based on Android 7.1 OS, enabling a plethora of
personalization functions, such as the Private Space  you can add contacts, messages, call records,
photos, files, apps, notes and recordings. By making them invisible, your
personal information and data safety can be secured.
In
addition, Gionee Amigo’s Game Mode prevents incoming calls and messages from
interrupting gaming and optimized the gaming experience. Its Eye Protection
feature filters out blue light to protect the user’s vision and prevent eye
strain.
Multi-tasking
Marvel
You don’t need to be a super-hero
to have quick reflexes. The S Series excels at quick operations, such as using
a specific fingerprint to rapidly open photo, recording and torch, and various
fingerprints match various functions. Enjoy chatting while watching videos? Who
doesn’t? Split
screen makes it possible for the user to handle two different things in one
screen at one time.
Higher,
better, faster, stronger
To
support higher workload demands, S11 offers 6GB+64GB memory, expandable up to
256GB, and S11 lite offers a 4GB+32GB memory, which is more than capable of
handling a typical workload and is expandable up to 256GB. That means both
phones run faster and smoother when multi-tasking, processing and switching
apps. They also have plenty of space for photos, files and videos.
S11’s built-in new-gen MTK
Helio P23 64-bit Octa-core 2.5GHz processor provides a superb shooter
experience, supported by new-generation image technology. Meanwhile, S11 lite’s built-in Qualcomm
Snapdragon 64-bit Octa-core 1.4GHz processor also provides a smooth gaming
experience.
The S11’s “brain power” is
stronger too, supported by a built-in 3410mAh battery combined with Gionee
exclusive Smart Power Consumption Management System, which supports all-day
battery life. You’ll wonder why you carry a Power Bank.
Making
Smiles Worldwide
“At Gionee,
we strive to ‘Make Smiles’ with each new technological innovation and beautifully designed,
feature-rich product,” said Liu Lirong, Chairman of Gionee Group. “With this aim in mind, we are very excited to introduce our new S
Series phones –
sure to make smiles
around the world.”

* “FullView display” is a marketing name of Gionee which described
Full-Screen or All-Screen.