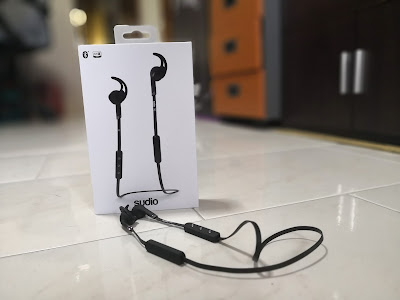 We have always been the fans of Sudio audio products because of their well-known audio performance and design. Last year, we were totally blown away by their Sudio Vasa Bla with its optimized audio profile and wireless capabilities for the price that it is offered at. Up until today, even with the new contenders in the market, we still felt that the Vasa Bla is one of the best wireless earphones that we have tested.
Fast forward to Q4 2017, Sudio has continuously expanded their product line into headphones, as well as earphones for sports. Today, we have the new Sudio Tre wireless earphones for review. This set of earphones are designed for active users, as it has features that are specifically made for this aspect. Will it live up to the name of the brand? How does it perform when we put it to the test? Read on to find out more. 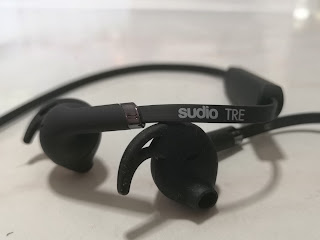 The Sudio Tre is created for sportsmen/women who wants to listen to their music while exercising. More importantly, the Tre is designed to make sure that it fits well and securely in the ears, so that it does not fall out even while you are exercising. To achieve this feat, Sudio has equipped the Tre with a wing-tip design that hooks onto your ear bone.
We do see many similarities between the Sudio Tre and the Sudio Vasa Bla. The Tre has adapted its design largely from the Vasa Bla. It continues to have the flat style of cables, which cleverly reduced the chances of entanglements when the earphones are placed in your pocket. This design consideration also ensures the strength and durability of the earphones. This has been thoroughly tested, as the Vasa Bla was my main set of earphones, and it is still functioning very well even up until today. 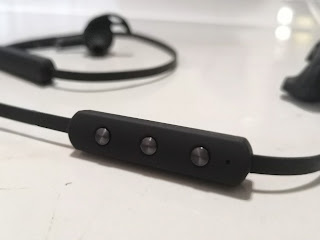 The Sudio Tre also has 3 quick access buttons for the control of soundtracks, volumes and Bluetooth pairing. We did not have to read the instructions manual at all to get started, as it was really intuitive. To turn on the unit, simply hold down the middle button. Pairing uses the same button, but you will have to hold the button down even longer until the pairing prompt is heard in the earphones. During playback, the same button is used as the pause/play button. Alternatively, the other two buttons operate similarly as well. Hold on to them to skip track, or tap for volume controls. You can finally control the songs on your playlists without even taking out your phone/media player! 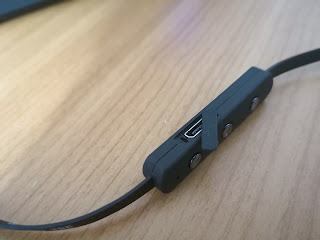 The Sudio Tre uses a micro-USB port for charging. It has also been noted that Sudio has managed to increase the battery capacity on their wireless earphones, as it now can reach up to 9 hours of music time on a single charge, as opposed to 8 hours on its predecessor. This has inadvertently slightly increased the bulk on the earphones, as it now has two “blocks” (assumed to be batteries) that is connected to the same wireless earphone line. Regardless, the physical design does not affect quality or portability in any way.

Putting it to the test 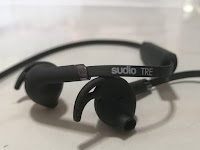 The Sudio Tre is made to perform. Based on our test and preference, we totally enjoyed our time on the Sudio Tre. As expected, the sound profile is well balanced across all frequencies, with crisp highs, clear mids and thumpy lows. Such a sound profile should be largely likable to mainstream listeners, who do not want to lose details in every aspect of the music. Every segment of the music can be effectively articulated through the drivers and into your ears, allowing the listener to really “live in the music” and immerse in it thoroughly. 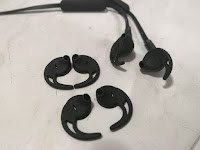 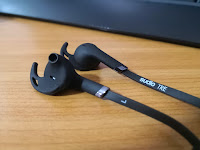 How does it fit while using it for jogging? Honestly speaking, saying that “one size fits all”, or more specifically, “one design fits all”, does not apply for the Sudio Tre. Even though Sudio has included 3 different wing-tip sizes to make the earphones secure on the ears, the earphones still felt loose with a tendency for them to drop off. However, we do appreciate the wing-tip design, as opposed to a more secure in-ear design, as an active person will still want to be able to listen to the surrounding and environment when exercising. Using an in-ear earphone design would largely impact the exercise experience, which would have impacted Sudio’s decision process. Well, we can only say that we do expect a new and improved design in the future. 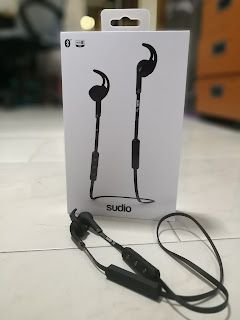 The Sudio Tre has definitely lived up to the expectations of the brand. Its audio quality was great, and performance also was similar, if not better, than its predecessors. Its simple and elegant design makes it a great set of earphones all the different occasions. We felt that the only downside was that its wing-tip design was not as secure as it is supposed to be, as the earphones still felt loose and had the tendency to drop.

SUDIO Tre retails at $139 (SGD) and is available in Black, Classic Blue, Pink and White. 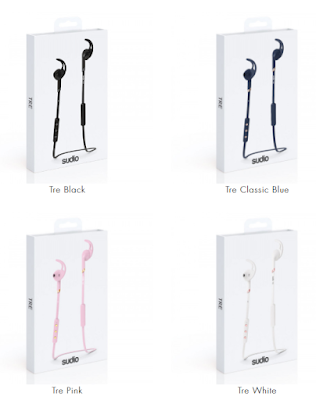 SUDIO earphones can be purchased online at http://www.sudiosweden.com/sg/earphones-collection. SUDIO has a dedicated site for Singapore purchases.

As supporters of The Tech Revolutionist, you can simply input the “techrevo” promo code at checkout to get a 15% discount off the products from SUDIO.