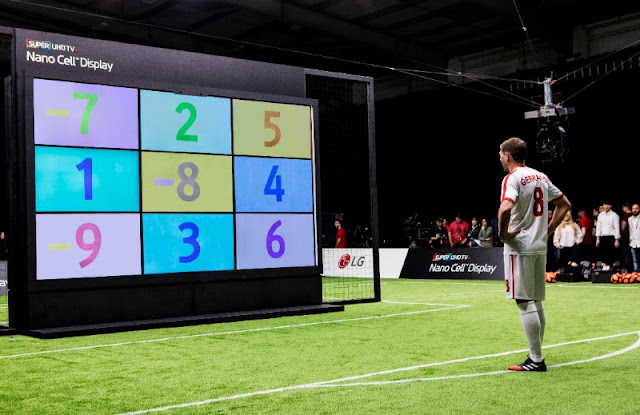 BERLIN, September 6, 2017 — LG
Electronics (LG) successfully
concluded its LG Nano CellTM Super Match, which pitted international
football stars Steven Gerrard and Adam Lallana against one another in a unique
shootout competition, and generated over 100 million views and over 4 million social interactions
on YouTube, Facebook
and Instagram channels. LG’s popular video campaign
also topped the Viral Video Chart of Advertising Age in the second and third weeks of August.
The LG Nano Cell Super Match elicited passionate
social media responses, and this
high level of engagement for its campaign was due to a combination of factors.
Firstly, the LG Nano Cell Super Match leveraged the brilliant football skills
of Steven Gerrard and Adam Lallana. Secondly, several YouTubers who maintain
massive online audiences, such as Ali-A, ChrisMD and Freekickerz, participated
and commented during the Super Match. But most important of all, the success of
the Super Match hinged on LG’s experimental arena, which demonstrated how LG
Nano Cell TVs’ accurate colors from any angle provide a key benefit both on the
pitch and in the living room.
In a video (Link)
that has been watched millions of times around the world, Gerrard and Lallana show
off their world-class football abilities by skillfully aiming the ball at small,
numbered squares on a screen positioned at a 60 degree angle from the
footballers. The uniquely designed pitch was split in half and divided by a dual-sided
screen, which displayed a range of numbers indicating point values with alternating
plus and minus signs. During the challenge, both Gerrard and Lallana had difficulty
achieving high scores on the side equipped with displays of a conventional LCD
TV because they could not correctly read the positive and negative signs on the
screen.
However, this did
not happen on the side of the pitch equipped with LG’s Nano Cell-enabled SUPER
UHD TVs, as both players could view LG’s Billion Rich Colors from any angle in
the arena. Nano Cell displays can maintain excellent picture quality consistently
at angles of up to 60 degrees. In contrast, other LCD TVs with narrow viewing
angles suffer from image degradation, which results in faded colors and even
the omission of some visual content when the screen is viewed at an angle of more
than 30 degrees off-axis.
“When I checked
the score board after the first round using LG’s SUPER UHD TVs with Nano Cell,
I wondered what had happened to Lallana’s football abilities on the other
side,” said Gerrard. “But once we switched sides, I realized it was actually a
lot harder to figure out which targets to hit. The interesting arena taught me
that being able to clearly see what’s there and what’s not, even at extreme
angles, is important for scoring goals and when watching TV in the living
room.”
The ability of a
TV to render images consistently across a range of viewing angle is receiving
more attention from experts as an important factor in determining overall
picture quality. Though other LCD TVs claim the ability to render billions of
colors, viewers can only experience these benefits when seated directly in
front of the TV’s center. This is because colors, contrast and brightness on
these displays can vary depending on the user’s viewing position or angle. However,
according to a study conducted by IPSOS, on average only four percent of
viewers in the U.S. and France watch TV while sitting directly in front of
their TVs, while more than half of viewers watch their LCD TVs from off-axis
angles.
“As a
mid-fielder, maintaining a wide view of the entire pitch is essential for
making accurate passes and taking advantage of shooting opportunities,” said
Lallana. “This experimental event showed me that wide viewing angles of a TV
are just as important as having a wide view of the pitch for football players.
This is a key advantage when watching sports on TV with your family or
friends.”
LG’s 3rd-generation
2017 SUPER UHD TVs with Nano Cell display technology can deliver more accurate,
richer colors at wider viewing angles than conventional LCD displays. What this
means is that friends and family seated on a long couch will experience no
difference in perceived color whether seated directly in front of LG’s SUPER
UHD TV or at a 60-degree angle. With wider viewing angles, accurate colors and
enhanced motion handling, LG SUPER UHD TVs are also the ideal platform for consumers
to watch any content – live sports in particular – while helping them see all
the information on the screen in perfect detail from any angle.
“We are thrilled that LG’s Nano Cell Super Match drew
such a positive reaction from the global online community,” said J.S. Lee, vice president of the LG Home
Entertainment Company Marketing Department. “With the success of our social media
campaign, the company hopes to bring greater attention to the distinct disadvantages
of conventional LCD TVs and their limited viewing angles, which degrade a
viewer’s overall experience. The Nano Cell Super Match video will also allow more
consumers to understand the importance of wider viewing angles when they are
choosing a TV for their living room.”
Visitors at IFA 2017 in Berlin experienced the visible
difference that wide viewing angles have on watching TV. Participants dropped
by the LG Booth for an interactive experience which simulated what the football
stars could and could not see during the Nano Cell Super Match. Additional
details about the campaign can be found on www.lg.com/NanoCellSuperMatch