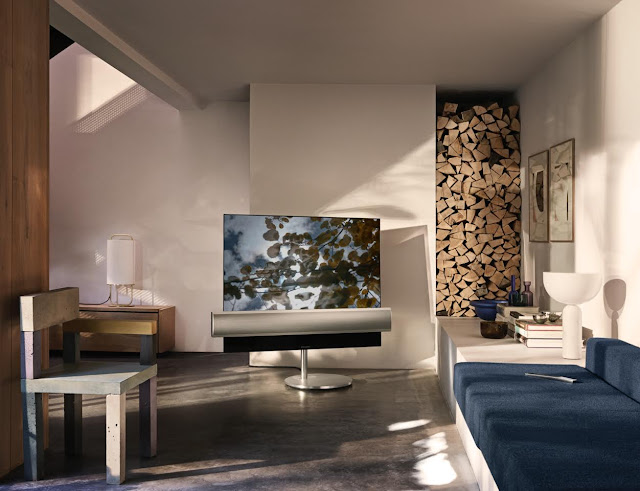 Collaboration Between Two Iconic Home Entertainment Companies Results In
TV With Unsurpassed Picture Quality, Audio, Design and Craftsmanship
BERLIN, August 30, 2017 — LG
Electronics (LG) and Bang & Olufsen unveiled the result of their first
collaborative effort in the home entertainment space with the unveiling of the BeoVision
Eclipse TV to the world for the first time at IFA in Berlin.
The new BeoVision
Eclipse TV, which will push the boundary of the premium TV experience,
signifies the beginning and the very essence of the strategic partnership
between LG and Bang & Olufsen, first announced in March 2016. LG’s
groundbreaking OLED technology continues to amaze video experts and consumers
alike while Bang & Olufsen’s celebrated design aesthetic and acoustic
precision continues to excite audio enthusiasts all around the world. The
marriage of LG’s OLED technology with its perfect blacks and superior picture
quality and Bang & Olufsen’s sophisticated approach to audio is perfectly highlighted
in the beautiful BeoVision Eclipse.
The collaboration
between LG and Bang & Olufsen on the BeoVision Eclipse TV commenced in 2016
with a completely clean slate. Two teams of engineers and designers worked
across the nearly 8,000 kilometers and seven time zones separating Struer,
Denmark and Seoul, South Korea to develop the first OLED TV to carry the
coveted Bang & Olufsen name. The final product, as visitors to IFA 2017
will see, is truly a work of art.
“Consumers
all over the world will immediately recognize LG’s unrivaled OLED and video
processing technology inside this beautiful television crafted by Bang &
Olufsen, a company with a strong heritage in design and sound,”
said Lee Sang-woo, vice
president of business strategy at the LG Electronics Home Entertainment Company.
“We are looking forward to further developing this relationship going forward.”
The collaboration with LG Electronics marks
the beginning of Bang &
Olufsen’s strategy of expanding its technological
capabilities and scale through
partnerships. This allows Bang & Olufsen
to focus on core capabilities within acoustics, design and craftsmanship, while
further optimizing the company’s supply chain, development, production and
service to improve the long-term profitability of the company.
“Bang &
Olufsen and LG both share a long tradition of innovation and craftsmanship,” said
Stefan K. Persson, executive vice president at Bang & Olufsen. “The
strategic partnership between the two companies demonstrates the mutual desire
to continuously push the boundaries when it comes to merging world-class design
and cutting-edge technology. The result of this collaboration, the BeoVision
Eclipse, is a true example of that.”

Google Wifi is Finally Here in SG From 31 August! - Only Available at Starhub