Open work-space setups are starting to become common for new offices. However, such new designs decreases the privacy between individuals, thus making it extremely difficult to hold private video conferences without affecting colleagues. The idea of huddle rooms came about because of such a limitation. Huddle rooms allow employees to have their privacy to carry out their video conferences and other meetings. 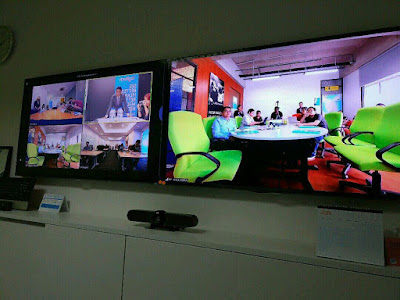 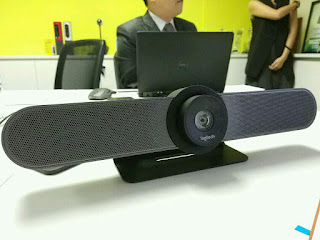 1. All-In-One solution that is easy to setup 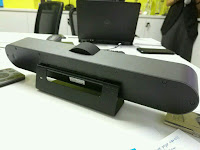 Instead of having multiple equipment with cables running around the whole meeting room or Huddle room, the MeetUp is an all-in-one solution that only requires 2 cables, one for power and one for the connection to the PC. This give all users an almost seamless plug and play experience, as MeetUp device will automatically be detected and installed on any Windows or Mac computers. The single USB connection connects all microphones, speakers and webcam unit from MeetUp to the computer!

Logitech is one of the leading designer and manufacturer for consumer speaker system. With their experience in the area, they were able to bring in the best possible designs to MeetUp. The speakers in MeetUp are custom tuned, and are specifically optimized for voice clarity in small conference rooms. There are also three microphones within the small MeetUp package, allowing beam-forming capabilities for optimal noise cancellation and isolation of voice inputs. The whole system is also Microsoft Cortana certified for precise voice command on an Windows 10 system.

Based on our first impressions with the Logitech MeetUp, we were pleasantly surprised by its performance and interference blocking capabilities. Despite having a conference meeting across four areas, namely Singapore, Manila, Philippines and Malaysia, and with varying internet speed and bandwidth, the Logitech MeetUp was able to drop all echos and feedbacks effectively for a disruption free video conference.

Logitech has 20 years of experience in making webcams, and all the goodness of webcam technology are built into the Logitech MeetUp. Firstly, Logitech has utilized a wide 120 degree angle lens, so that everyone in a meeting room can be captured by the camera. Even if someone is sitting very near to the blind spots of common cameras, they can still be captured by the camera. Moreover, the Logitech MeetUp also supports 4K video recording, and is ready for ultra high definition video conferencing in the future.

The Logitech MeetUp is simply a very feature-packed hardware that can be interfaced to any PC in your office. This also means that it will also work with any video conferencing software that the corporation uses. Logitech MeetUp has been certified to work well with Webex, Zoom, Skype, Vidyo,V-Cube, BlueJeans, Google Handouts and many other video conferencing software solutions.

The Logitech MeetUp ConferenceCam will disrupt the whole video conferencing equipment market with its attractive price point of 1529SGD. It will be available in July 2017 via the Logitech Video Collaboration reseller network. An additional Logitech Expansion Mic for MeetUp will also be available at a SRP of 375SGD.

A look at the new OPPO R11 Camera Smartphone