Here’s our experience at the AWS Masterclass on AI

Home » Here’s our experience at the AWS Masterclass on AI 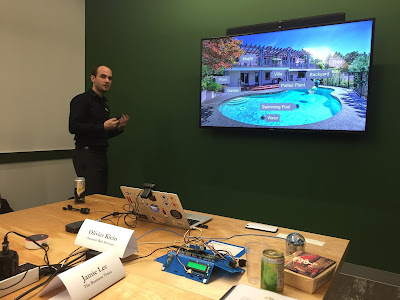 As previously foreign phrases such as ‘Machine Learning’, ‘Deep
Learning’, and ‘AI’ pop up in everyday lexicon of young startups, one must
wonder, “what in the world do they even mean?”.
While avoiding the topic and preaching the dangers of artificial
intelligence (AI) after attaining “expert knowledge” from movies such as “The
Terminator (1984)” and “Transcendence (2014)” might be a viable option to some
in the early 20th Century, it is most definitely unwise to shy away from
understanding a field that will inevitably make a revolutionary impact to the
evolution of the humanity.
Truth be told, even the proposition that technology is at the
brink of converging to a singularity in a matter of decades sends chills down
my spine every night.
As former US Secretary of Defense Donald Rumsfeld once noted,
“There are known knowns. These are things we know that we know. There are known
unknowns. That is to say, there are things that we know we don’t know. But
there are also unknown unknowns. There are things we don’t know we don’t know.”
My sentiments toward the entire advent of AI and the exponential
growth rate of technology are as such: Though the future might be unfathomably
uncertain, it never hurts to understand it more rather than worrying about the
risks entail.
As such, I pounced at the invitation to attend Amazon Web
Services’ (AWS) Masterclass on Artificial Intelligence.
The AWS office located on the 9th level of One George Street
accentuated a variety of natural and organic tones, with the walls flushed with
a forest green hue and honeycomb-shaped decor in the backdrop.
After receiving a warm welcome by our AWS speaker, Olivier
Klein, the session commenced with a brief introduction about AWS and its
on-demand (means you only pay for what you use) cloud-computing platforms such
as ‘Amazon Elastic Compute Cloud (E2C)’ and ‘Amazon S3’. 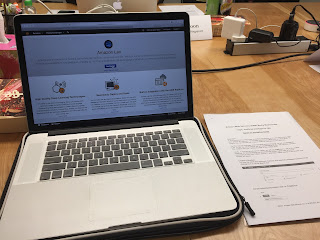 Operating in 42 Availability Zones within 16 geographic Regions
around the world, AWS boast over 90 highly developer-friendly services that aim
to enhance business operations, including Amazon AI services such as ‘Amazon
Lex’, ‘Amazon Polly’, and ‘Amazon Rekognition’. Later on, we even got the
opportunity to see how each of them worked and tried our hands on creating a
chatbot using Amazon Lex, integrating it with Facebook messenger.
Following that, Klein provided an overview of what AI is and its
applications in optimising business operations. As businesses grow, the volume
of historical data that is recorded increases as well. In order to take
advantage of this to evolve a business, predictive models are created using
machine learning algorithms that train on historical data, just like how humans
learn based on past experiences.
Klein introduced us to Amazon’s latest venture in exploring the
realm of AI, Amazon Go (https://www.youtube.com/watch?v=NrmMk1Myrxc). A grocery that
doesn’t require physical checkouts to purchase items. 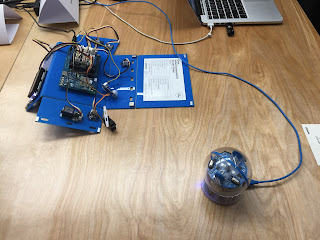 He sheds light on the concept of ‘The Internet Of Things (IoT)’,
and explains how everything, with the help of AI will become connected in a
world where data is seamlessly parsed from one smart object to another to
enhance the experience for users.
One such example was of Toyota Tsusho Electronics (Thailand)
which uses embedded software in automotive vehicles to display real-time
traffic information service to motorists, resulting in a 30% reduction in
traffic congestion with data only from 130,000 cars.
The highlight of the session was definitely the voice
interaction between Klein and his Amazon Echo dot. Amongst the myriad of tasks
the Echo dot could execute when interfaced with ‘Amazon Alexa voice service’,
its ability to communicate with the cloud and to the Arduino device that Klein
had built was by far the most impressive. Klein could even ask Echo dot to
display what he said on the LCD screen of the Arduino!
Klein did an impeccable job in engaging the room for the
entirety of the 3-hour session.
Overall, the masterclass was an absolutely eye-opening
experience into the world of AI and the multitude of services AWS can provide
to enhance and optimize business operations.

Cooler Master Leaks a Peek into the COMPUTEX Vault