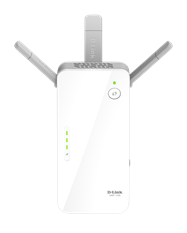 Singapore, May 2017 – D-Link, one of the world’s biggest suppliers of
networking products, has launched The DAP-1720, AC1750 Wi-Fi Range Extender. The DAP-1720 AC1750 Wi-Fi Range Extender is a
portable plug-in device that lets you extend the range of your wireless
networks. It can also be used to create a wireless access point when connected
by Ethernet. Small yet powerful, it supports Wireless AC speeds of up to 1750
Mbps.
Extend Your Wireless Network
Increase the coverage
of your home or office wireless network with the sleek and easy-to-use DAP-1720
AC1750 Wi-Fi Range Extender when you move from room to room, office to office,
floor to floor, or yard to yard without losing signal. You can now stream live
news, music, or sports on your mobile device seamlessly. You can also use the
DAP-1720 as a wireless access point by connecting an Ethernet cable to the
built-in Gigabit Ethernet port.
Easy to Set Up, Easy to Use
Setting up the AC1750 Wi-Fi Range Extender is
simple. You can use one-touch configuration by pushing the WPS push-button on
the DAP-1720 and on the router or access point you want to extend, and the
DAP-1720 will automatically configure itself for you. Alternatively, you can
use the supported QRS Mobile app on your iPhone®, iPad®, or iPod touch® or
Android™ mobile device to set up the DAP-1720 easily without needing a
computer. It even includes a built-in setup wizard that lets you configure it
wirelessly using a PC or mobile device.
Dual Bands to Ease Channel Congestion
The DAP-1720 AC1750 Wi-Fi Range Extender
simultaneously operates on both the 2.4 GHz and 5 GHz wireless bands using
concurrent dual-band technology with three Multiple In Multiple
Out (MIMO) external antennas. High frequency 5
GHz band technology provides more total available bandwidth and faster
communication between your latest wireless devices, leaving the 2.4 GHz band
for devices with lower bandwidth requirements. This allows you to connect your
existing devices to the 2.4 GHz band and leave the 5 GHz band available for
your high bandwidth devices to stream high quality 3D/4K video, play online
games, or make Internet voice and video calls.
Smart Signal LEDs Makes Placement a Snap
The DAP-1720 AC1750 Wi-Fi Range Extender
features D-Link’s Smart Signal LED technology which makes finding the optimal
location for your extender a cinch. With other range extenders, it is difficult
or impossible to gauge how strong or weak the connection between an extender
and an uplink network is. The DAP-1720’s Smart Signal LEDs eliminate the
guesswork by intuitively lighting up, giving you instant visual feedback so you
can quickly test out multiple locations to find the best place for the
DAP-1720.
The DAP-1720 prepares your home to become a
Connected Home by bringing Wi-Fi to places your existing signal can’t reach. A
stronger Wi-Fi signal means you can install more wireless surveillance cameras,
baby monitors, sensors, and alarms in the places where you need them. Plus, the
speed and convenience of the DAP-1720 AC1750 Wi-Fi Range Extender means you no
longer need to consider the frustrating, expensive, and time-consuming task of
professionally installing Ethernet cables to each of your devices.
The D-Link
DAP-1720, AC1750 Wi-Fi Range
Extender is available in retail
in June 2017.

Are you leading the cognitive travel revolution?