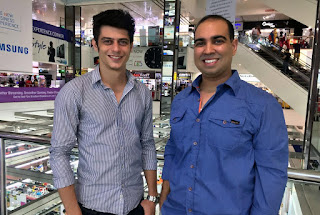 Singapore, November 9, 2016 – In case you don’t already have an opinion on Sim Lim Square, ask anyone what they think about it and it’s unlikely that you will get very positive feedback.

The problem is that when Sim Lim Square makes the headlines, it’s usually not for good news. And despite continuous efforts from the management to revitalize the mall, the place still feels quite empty.

Two tech-lovers want to change that with an independent price comparison platform called Simlim.sg, aimed at bringing more transparency to Singapore’s largest electronics and IT hub.

“Sim Lim Square has so much potential to be a great place. It’s like a cave of wonders for tech-geeks with hidden gems you can’t find anywhere else in Singapore.” says Michael Grosso, co-founder of Simlim.sg. “But finding the good deals and avoiding the bad ones is precisely everyone’s biggest challenge when it comes to shopping at Sim Lim Square. That’s why we decided to launch Simlim.sg.”

Simlim.sg offers a simple interface whereby visitors can search and browse thousands of electronics and IT products, and be provided with the latest prices from over 55 participating Sim Lim Square merchants (as of launch date). Users also have the option of directly communicating with merchants through the platform’s Messaging feature where they can ask for more product details, check stock availability, or enquire about anything else – from the convenience of their home or MRT ride to work.

Aside from price comparison (and perhaps more importantly), the platform also allows customers to rate merchants in an effort to encourage and recognize good customer service at the mall.

By digitizing retailers, Simlim.sg combines the convenience of an e-commerce-like platform with the accessibility of physical stores, relieving customers from having to choose between waiting for delivery and spending time locating a store that sells what they need.

“Stores are not dead, but they have to adapt” says Michael. “Besides proposing an ever-better in-store experience, small shops need to step up their online presence as well. This is crucial because even
though we are still mostly buying from stores today, we are increasingly relying on information found online to decide what and where we’re going to buy. The problem is that small shops are essentially invisible online, which leads to a growing part of their business lost to e-commerce each year.”

Michael came up with the idea out of sheer observation while he was looking for a hard drive in Sim Lim Square. “I remember seeing an excited group of students sitting on the floor by the lifts, circling good deals on price lists spread out in front of them. Then I saw almost everyone else going from one store to another, relentlessly hunting for the right product at the right price. Obviously most retailers and shoppers own a computer or a smartphone, so I figured there must be a better way to connect them together.”

Roger Mulchandani and Michael Grosso met in 2015, while working at the same advertising firm in Singapore.

“Michael and I quickly became good friends, and we started talking about Simlim.sg soon after we met. I immediately saw the potential of a service that could finally allow shoppers and retailers to connect more directly. Both Michael and I grew up in small family businesses and thus fully appreciate the importance of helping them be an active part of today’s digital economy. The irony is that a lot of them actually have better prices than the bigger stores or e-commerce, but no one knows about it because they are essentially invisible.” said Roger.

The topic became a recurring conversation, and the chats soon turned into a serious project on which the pair found themselves spending countless nights and weekends perfecting the concept and development of Simlim.sg. The two co-founders contacted Sim Lim Square’s management as soon as the site was ready for a demo in July, to show them the concept and get their feedback before approaching the merchants of the mall. Their feedback was very positive; even more so from the merchants themselves.

As Roger relates: “I got to spend a lot of time with various shop owners understanding their concerns about trading at the mall, and how previous bad publicity had affected them. Once I shared our vision of Simlim.sg and how transparency could benefit both their business and customers, they totally got it. Both Michael and I were very encouraged to see that we got over 55 businesses to join the platform before we even launched. And it’s incredibly rewarding to see that we literally have every category of IT and electronics represented on the platform from Day 1.”

Simlim.sg has over 55 retailers as of launch date featuring over 4000 products available across all categories of IT and consumer electronics.