Ascend Money, Part of Thailand’s Ascend Group, Announces 20 Million Customers in Southeast Asia
·        Partners with Ant Financial; aims to serve 100 million under-served consumers in Southeast Asia by 2020 and be the leading fintech company in the region
·        Targeting both digital consumers and underbanked populations
·        Only Southeast Asian fintech company licensed to provide e-money financial services in all of Southeast Asia’s major markets
SINGAPORE, 30 November 2016 – Ascend Money, a Southeast Asia fintech business under Thailand’s Ascend Group, has announced reaching 20 million customers in Southeast Asia. Ascend Money, through TrueMoney, an e-payment and financial services provider, and Ascend Nano, an e-lending provider, offers a mobile wallet, debit cards, cash cards and consumer payment and lending solutions. It has built a regional network of tens of thousands of agents providing cash-in and cash-out services, especially valuable for unbanked populations. It is the only fintech company with proper e-money licenses to operate financial services in all of Southeast Asia’s key markets.
Punnamas Vichitkulwongsa, Chief Executive Officer of Ascend Money said, “We are now bringing financial solutions to more than 20 million people — both banked and unbanked – across the region, building on our mission of drivingfinancial inclusion in Southeast Asia. The lack of basic financial services has created major barriers for people to overcome poverty, by making it almost impossible for the majority of Southeast Asians to borrow or save money. We look to remedy this by offering our services in Thailand, the Philippines, Vietnam, Indonesia, Cambodia and Myanmar because banking services, in our view, is a basic human right. We look forward to fulfilling our mission of enabling everyone access to innovative financial services, leading to better lives.”
More than half of Ascend Money’s 20 million customers are currently from Thailand. The company anticipates customers from other SEA markets will increase significantly, in line with its geographic and product expansion. Ascend Money is aiming to acquire 100 million customers by 2020 and to establish itself as the largest financial services provider in Southeast Asia.
Partnerships will play a key role in achieving this goal. Earlier this month, Ascend Money announced a strategic partnership with Ant Financial, a financial affiliate of Alibaba Group Holding Ltd, to grow its digital and offline payments and financial services business in Thailand, while helping the latter to expand into the broader Southeast Asian market. Both entities look forward to sharing knowledge and technology, as well as connecting their respective payment methods to enable consumers to transact digitally across borders.
Ascend Money is targeting both digital consumers and the underbanked segment. For digital consumers, Ascend Money’s payment solutions include a mobile wallet (TrueMoney), virtual and physical debit cards (WeCard, offered jointly with MasterCard), prepaid cash cards, and a bill payment solution . For underbanked consumers, Ascend Money works with its agent network across the region to enable cash in and cash out capabilities, as well as facilitate transactions, including domestic and international remittances and bill payment. It has over 23,000 agents in Indonesia alone, seven times the number of branches compared to the country’s largest bank. Ascend Money’s Myanmar and Cambodia agents also exceed the outlets of the largest banks. In Thailand, 80 per cent of its agents are exclusive partners. Ascend Money plans to increase the number of its digital service agents to 500,000 by 2018.
Ascend Money is a business unit under Ascend Group. It was established with a mission to drive financial inclusion across Southeast Asia – a region where only 27 per cent of its 600 million people have a bank account in 2016, according to KPMG. In markets such as Myanmar, Laos and Cambodia, this number falls to under five per cent. Meanwhile, according to McKinsey, bringing financial services to Southeast Asia’s unbanked population would increase the economic contribution of the region by as much as US$17 billion to US$52 billion in 2030.
“Our vision is a world where people have access to financial services so they have the life opportunities they deserve. It took over two hundred years to bring financial services to less than thirty percent of the region’s people; our goal is to cover the rest within the next 10 years or less,” added Mr. Vichitkulwongsa.
Biography – Punnamas Vichitkulwongsa, CEO of Ascend Money 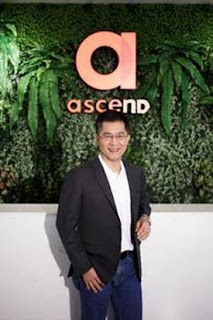 Punnamas is the CEO of Ascend Group and Ascend Money.
With over 17 years of experience in the finance, technology, media and telecom industries, and extensive international experience, he is an expert of new business development, product innovation, marketing and partnerships.
Prior to joining Ascend Money, Punnamas was the Director of Mobile Financial Services of Singtel Group in Singapore. He started a new retail bank, targeting digital consumers with innovative customer-centric propositions whilst integrating personal financial services and embarking in M-commerce.
Punnamas is extremely passionate about start-ups and building new businesses with a proven record of success. He is an entrepreneurial and result-driven individual who enjoys problem-solving and people and team development.
EDUCATION
Executive MBA, Sasin Graduate Institute of Business Administration, Chulalongkorn University, Bangkok, Thailand
BSEE, Electrical Engineering, University of Washington, Seattle, U.S.A.