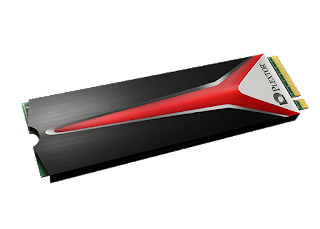 In the recent years, there have been great improvement and development made in PC secondary memory technology. While slower Hard Disk Drives are still filling a gap in the market with the provision of an affordable and large capacity storage requirements, Solid State Drives are starting to catch up and replacing many computer systems as the main secondary storage choice. This is attributed to the higher performance and access speeds that it brings to personal computing, as well as the drop in its manufacturing costs with the new NAND technologies and manufacturing processes in the market.

However, much of the performance and technology benefits of the SSD is yet to be fully unleashed and utilized. This is because most SSD in the market still adapts to the usage mode that the hard drive uses, thus limiting the SSD to a margin of what it is actually capable of. A hard drive communicates with the storage controller typically via SATA physical interface and AHCI. The collaboration of SATA and AHCI brings great benefits to mechanical hard drives as compared to the previous IDE technology, but it is simply not optimized or even designed for SSD. Therefore, a gap for a faster and optimized physical and interface protocol standard is required for transfer of data between SSDs and the system storage controller. NVMe is a new technology that fills the gap.

NVMe is the new access standard for SSDs, as opposed to AHCI. NVMe technology takes advantage of the SSD ability to read or write tons of data at once by processing multiple storage instructions all at once in a parallel manner. The biggest difference between NVMe and AHCI is something called Command Queueing. While AHCI allows processing of one queue at a time with a maximum of 32 instructions in a queue, NVMe supersedes the technology by providing more than 65000 queues with more than 65000 commands in each queue. This means that NVMe SSDs are going to handle much more storage instructions and requests every single one time. NVMe SSD can even enjoy the new 4GB/s bandwidth provided by the much faster PCIe x4 interface. SSD and NAND flash designers can finally focus their efforts on making their technology faster, rather than thinking about design limitations that arises with older interfaces. 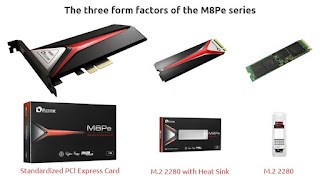 A look at Plextor M8Pe SSD

To learn more about the wonderful technology, we have the Plextor M8Pe NVMe SSD for review today. The model we have today is a 240GB version that connects to the computer via a M.2 interface. The M.2 interface allows the SSD to connect directly to the chipset’s PCIe x4 bus. It also supports the new NVMe protocol that this SSD supports.

In this review, we are going to compare the speed of the Plextor M8Pe NVMe SSD to a regular SATA SSD. We should be able to see the great improvements that the new SSD interface technology has brought about to the whole computer system.

To let this piece of SSD shine, Plextor has even added a heatsink on it to further enhance its aesthetics. It should look good in combination with any motherboard in the market.

Don’t underestimate the Plextor M8Pe M.2 NVMe SSD. Despite its rather small form factor, it is one of the fastest ever consumer based SSD in the market. We shall let the benchmark scores speak for the drive itself.

There’s nothing wrong with these numbers. The Plextor M8Pe SSD is indeed that fast, with sequential read speeds of beyond 2GB/s. A standard SSD( Crucial BX200 240GB) will be bottlenecked by the SATA interface and can never go beyond 600MB/s.

NVMe should be the default storage interface for all SSDs in the market. With the new NVMe technology, SSDs can perform to what they are actually capable of. The Plextor M8Pe has shown us just what possibilities new SSD solutions can bring to end users and high performance computing system. If you are looking for a outrageously faster computer system, forget about getting the best of the best CPU, as a fast SSD is sure to give you more noticeable difference in performance. The Plextor M8Pe’s should be the next item in your bucketlist. Its out of the world performance and attractive price points are sure to attract many geeks to purchase it.

ReCore | Survival Starts In The Core