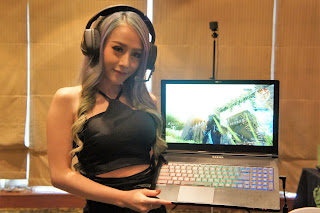 While everyone was sleeping in late on Singapore’s National
Day, NVIDIA secretly announced their next generation gaming graphics card solutions
for notebook computers. Thanks to the advancements and power efficiency made
possible by the Pascal architecture, NVIDIA is now able to put a full blown
desktop graphics chip on a notebook form factor, bringing notebook gaming to
the next level. Before moving on, you may be wondering “Are you sure? Full desktop
GPUs?” Yes! Indeed! These are the exact GP104 and GP106 graphics processing
units on the desktop variants! (possibly not even a “variant”)

Since the embargo was just lifted, we are excited to
share with you the great news and technology that NVIDIA has brought to the
market. They have announced the GTX 1080, GTX 1070 and GTX 1060 for notebook computers. Below are the specifications of the mobile based GPUs that will
be released starting from today. 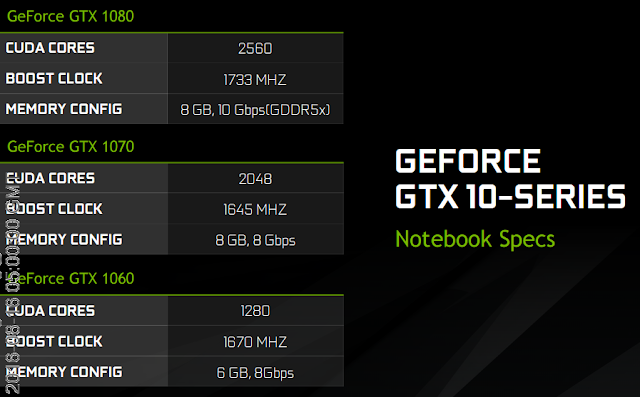 Desktop GTX 1070 has 1920 CUDA Cores. Notebook GTX 1070 has more
If the difference in number of CUDA Cores between the mobile
based GTX 1070 and the desktop variant caught your attention, you are in for
some big news. To reduce the power draw from the notebook version of GTX 1070,
but at the same time retain the performance of the same desktop card, NVIDIA
has decided to increase the number of CUDA cores in the notebook based GTX 1070
and reduce its clock frequency. This design consideration allows it to run at a
similar speed as compared to the desktop version of the GTX 1070, but also keep
it within temperature and power limits.
With such great graphics capabilities kept within a notebook
form factor, gamers can finally have a desktop-like gaming experience on a
portable computer. Moreover, the Pascal enabled graphics card on notebooks also
brings about additional gaming capabilities for the first time. Gamers can play
graphics intensive games on high resolution on these new cards. These notebooks
even support smooth experiences on Virtual Reality, 4K Gaming and 120Hz gaming.
This is why, we are also seeing new gaming notebooks that features 120Hz
displays with GSYNC technology and even VR certified notebooks that all runs on
the new NVIDIA GeForce 10 series graphics card.
It seems that NVIDIA has struck gold this time. By
leveraging on both advantages brought about by a smaller manufacturing process
and improvements from an all new Pascal architectural design, there is
genuinely a huge leap in performance. The question we have to ask ourselves is…
can the red camp keep up with all these blows?