SilverStone is a company that really listens to their customers’ feedback. At COMPUTEX 2016, we saw a refreshed product from SilverStone that was designed and improved after getting inputs and feedback from end users. 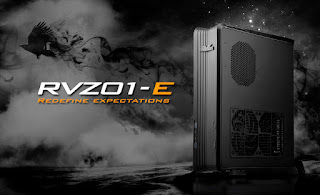 The SilverStone Raven RVZ01 is a small form factor computer chassis that fits a mini-itx motherboard, and has the capabilities to install a dual-slot graphics card of up to 13 inch in length. This chassis makes it a perfect choice for system builders who wants to own a small yet powerful machine. However, there was a small compromise that SilverStone had to go with in the initial design. The Raven RVZ01 only supports a SFX PSU, rather than a standard ATX PSU. This also limits the number of choices of PSU to be placed within the system.

Buyers of the SilverStone Raven RVZ01 loved the new chassis. However, many of them thought that the case could be improved if SilverStone was to design the case with support for an ATX PSU instead. Some end users even took measurements of the case and thought that a full-sized ATX PSU should fit well into the case. This additional space that the ATX PSU take up should not affect the fitting of the other components in the case as well.

Customers got what they wanted. SilverStone has released the Raven RVZ01-E Computer Chassis which fits in a ATX PSU. However, due to the small form factor of the case, and in order to still support a 13″ graphics card, the PSU has a length limitation of 140mm.

Xbox introduces future of gaming beyond console generations and without boundaries